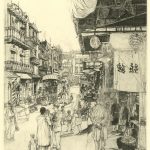 John W. Winkler (1894–1979) was born in Vienna and immigrated to the United States as a young man. Arriving in San Francisco in 1912, he studied with the painter and printmaker Frank Van Sloun at the San Francisco Institute of Art, and by the 1920s, he was an internationally celebrated etcher.