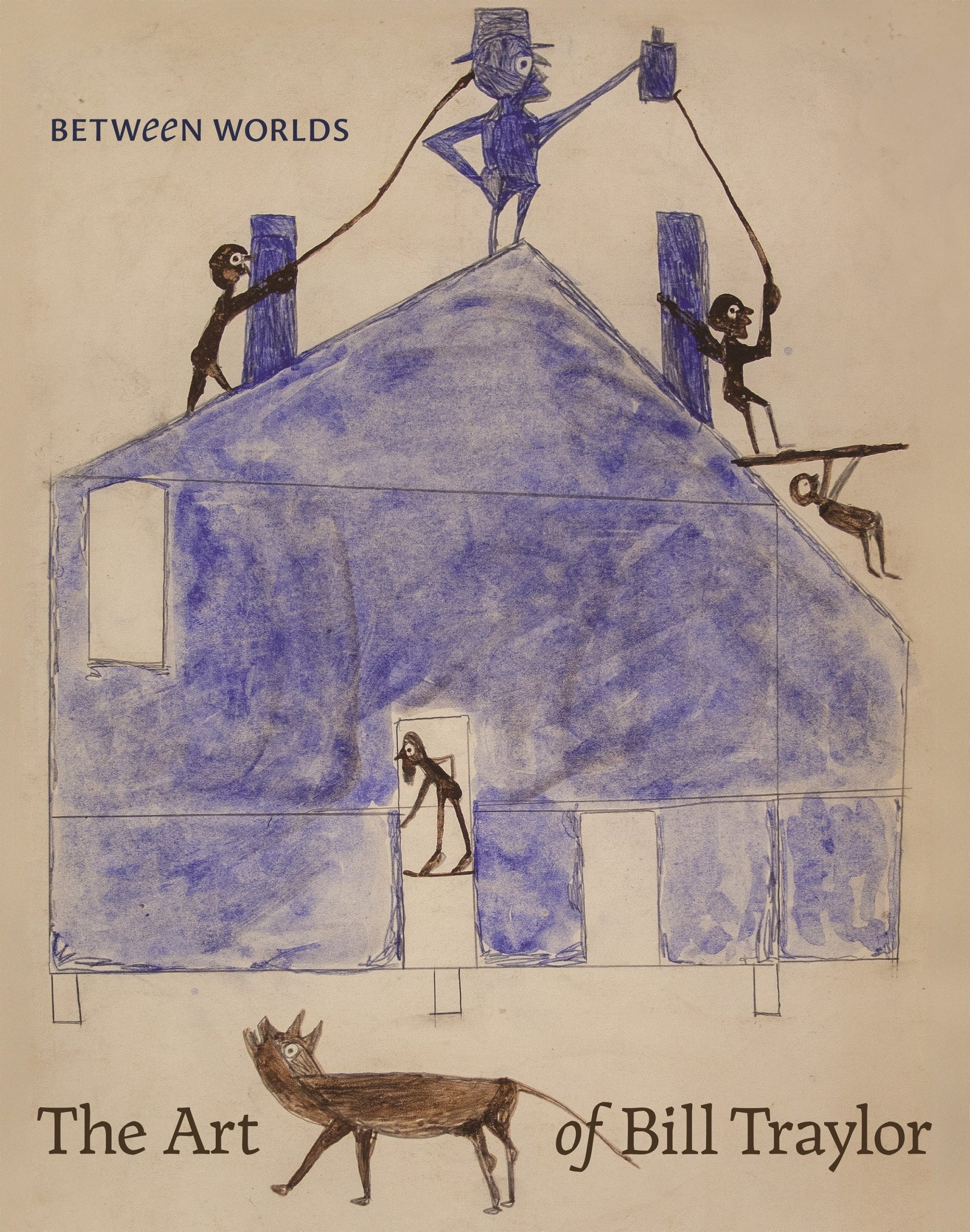 with an introduction by Kerry James Marshall

Leslie Umberger’s monumental catalogue, Between Worlds: The Art of Bill Traylor, which accompanied her 2018 exhibition at the Smithsonian American Art Museum, is a stunning, intensely researched, and moving tribute to a unique figure in the history of American art. So much misinformation and lazy conjecture has been attached to Bill Traylor (1854–1949), whose oeuvre represents the largest extant body of work we have by an artist born into slavery. Traylor produced art during the last decade of his life, when he was living, essentially homeless, in a bustling African American neighborhood of downtown Montgomery, Alabama. His highly abstracted figures, rendered primarily on discarded or used paper materials, depict a wide variety of subjects: animals, human figures, architecture, and household items. Some compositions are striking in their economy, with a single animal or human figure occupying space. Others are more complex, featuring multiple characters interacting in a narratively ambiguous scene. They are equal parts enchanting and haunting images that appeal to eyes trained in the aesthetics of high modernism.

The fact that Traylor’s images contain such appeal helped propel them into the mainstream art world in the decades following the artist’s death.1 Traylor’s biography—that he was an uneducated former slave who spent his life in poverty—meant that the critical heft and overall complexity of his work has historically been unrecognized, dismissed, or interpreted in problematically biased ways. To put it plainly, his drawings were seen as simple because he was perceived as simple. Whatever visual affinity his oeuvre has to the work of modernist figures such as Paul Klee, for example, was either coincidental or the result of Traylor’s lack of intellectual sophistication. By being naive, Traylor’s artistic expression was apparently unmediated and more authentic, described, for example, as “guileless depictions made by an accordingly unlettered man” (17).

With this past denigration in mind, Umberger’s central argument is an exceedingly important one: she asserts that Traylor knew it was risky to create any kind of record about his experiences as an African American man living in the Jim Crow South. Therefore, he created a deliberately abstract and personal visual language full of symbolism to effectively disguise himself and the full critical impact of his work. For scholars in the field of Southern black art, Umberger’s argument is not necessarily new or radical.2 Artists such as William Edmondson, Thornton Dial, and many of the Gee’s Bend quilters have faced similar bias in the reception of their work, as well as more nuanced recent critical appreciation. These artists, like Traylor, were also using complex visual codes to obscure the incisive quality of their work. In fact, one of the defining features of art made by black Southerners, especially those living and making work during Jim Crow, is this ability to create hidden visual systems of expression. Although Umberger’s interpretive strategy follows this paradigm, her methodology is extraordinary, offering a profound, exhaustive amount of historical, biographical, and contextual data that she compiles, interprets, and presents to readers.

The book is divided into two parts: “The Life of Bill Traylor” and “The Art of Bill Traylor.” The first section concerns Traylor’s personal biography, which Umberger constructs in exacting detail and with careful attention to his cultural environment and the genealogy of the white plantation Traylor family and the enslaved individuals they held in bondage. The primary documents Umberger cites and illustrates, such as George H. Traylor’s plantation records and historical maps of Montgomery, are revelatory to see for anyone who has long been invested in Traylor’s work and erroneously assumed little could be known about his life. Umberger points out that the advent of digitization has significantly helped scholarship around a figure such as Traylor, as archival records, rare books, and noncirculating materials are now much more accessible. The second part of the book begins in the late 1930s and charts Traylor’s creative progression as an artist. It is in this section that the reader will find Umberger’s perceptive eye and historical insight working together in full force, as she examines the once enigmatic iconography of Traylor’s oeuvre and makes compelling cases for potential references in his work.

Traylor’s forms are often so abstracted that it is difficult, at least for contemporary eyes, to immediately discern what he is representing. For example, one common and abstracted subject in Traylor’s repertoire, an oil lamp, signifies more than just a conventional light source of the time (fig. 1). Umberger suggests that the lamp’s association with African American domestic practices and conjure rituals might help explain their consistent presence in his oeuvre. The custom of “sitting up” with the dead would have been especially relevant to Traylor’s life, since for a period of time, he found shelter in a Montgomery funeral parlor. As Umberger explains, “It would be easier to accept Traylor’s oil lamps as generic elements of quotidian life if he had drawn them less frequently or given them less weight in his images” (145). The oil lamp is but one example of many common, abstracted subjects that take on new life in Traylor’s work owing to Umberger’s interpretation. Moreover, the disorienting, askew architecture in which these subjects are often set adds to the mystery of his compositions. Again, Umberger offers us an illuminating interpretation for Traylor’s structures, arguing that he perhaps did not intend for them to “realistically mimic those he had known or used,” but instead, “applied them as stage sets for the memories themselves” (221). Bit by bit, Umberger reveals to us the world in which Traylor existed, and how that world is transformed, interpreted, and documented through his art.

Traylor did not assign titles to his works, and so the titles we see today come from a variety of sources. The artist and collector who first promoted his work, Charles Shannon, assigned titles to some Traylor works when he began selling them in the late 1970s and 1980s. Shannon inscribed the back of many drawings and paintings with comments or quotes from the artist, as well as his own thoughts and opinions. At times, these titles can provide helpful insight into Traylor’s imagery. Their presence also demonstrates the complicated social and racial politics that arise when someone such as Shannon, a white Southerner well connected to the mainstream art world, helps shape the way Traylor’s work is received. As Kerry James Marshall succinctly states in his pithy and welcome introduction, “The way I see it, Bill Traylor has always been the property of the White collecting class.” Marshall is alluding to the larger phenomenon of collecting culture surrounding black artists, particularly self-taught ones, where white dealers, collectors, and curators have long been the sole determiners of value. Shannon, for instance, did not collect Traylor’s late works, because he deemed them of inferior quality. Therefore, on a fundamental level, what we know about Traylor is forever shaped by one (white) person’s aesthetic judgment. Marshall introduces readers to the historical—and contemporary—stakes surrounding the life and career of a figure like Traylor, referencing his own experience as an artist who must negotiate his racial identity in the (still) predominantly white art world.

As is often the case with artists who employ repurposed or discarded materials, Traylor’s consistent use of aged cardboard as a ground for his drawings and paintings was informed by both necessity and preference. Umberger recounts that Shannon used to bring Traylor new, clean pieces of board, but Traylor would only use them after they had taken “on the patina of street life” (110). Traylor deftly incorporated the stains, wear, and inclusions into his imagery, as seen in a work such as Pigeon (on a men’s handkerchief’s card), where the pigeon’s beak appears to be pecking at a staple. Such an inclusion points to Traylor’s wry sense of humor and his own awareness of the artifice of image-making. Creatures, such as this pigeon, often break the fourth wall, further asserting that part of the value of Traylor’s works is that they are far beyond simple documents of a time and place. His drawings and paintings are valuable because Traylor’s life, vision, and perspective are valuable. While the lives of so many individuals born into slavery can never be known, viewers of Traylor’s work are given the rare privilege of seeing one human being’s unique and astoundingly comprehensive artistic vision of the world.

Between Worlds: The Art of Bill Traylor is an act of love and deep, intellectual passion by any measure. Umberger spent seven years researching and producing this text and exhibition. Few scholars would go to the lengths Umberger did to plumb the depths of Traylor’s previously opaque biography and iconography. Such type of scholarship should be considered a deeply compassionate gesture, grounded in equal measure by empathy, nuance, and rigor. As with so many artists, we can never know all of Traylor’s motivations for creation or the full scope of meaning embedded in his work—but surely Umberger comes as close as possible, while still understanding and embracing the elusiveness of his work. The catalogue, which includes more than two hundred gorgeous illustrations of artworks from public and private collections, along with ample reproductions of archival material and historical photographs, make it not only the most comprehensive resource for Traylor’s work, but also an excellent one for those interested in the history of the American South. A bold and brilliant text, contained inside a beautifully produced object, Between Worlds sets the standard for the type of critical scholarship that can be done on an artist once discounted as marginal or an outsider.

PDF: Alexander, review of Between Worlds