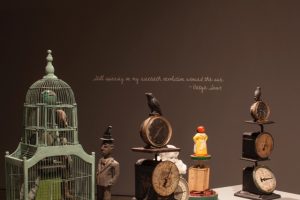 Scottsdale in the spring is a chaotic convergence of spring training and outdoor art festivals. At the cultural epicenter is the Scottsdale Museum of Contemporary Art, which recently featured a late-career retrospective of the distinguished artist Betye Saar (b. 1926). Her powerful transformations of found materials stand the test of time in the aptly titled exhibition, Still Tickin’. While the title of the retrospective comes from a sculpture—a small tower of worn clock faces from 2005 that eulogizes her late ex-husband, Richard W. Saar—it could also be read as a comment on the continued importance of her work in the still racially inequitable society of today, in addition to references to the passage of time, the virtue of perseverance, or even the percolating sound of social unrest. Filling three of the four main galleries in the museum, the sprawling exhibition consists of over one hundred works including multimedia collages, assemblages, sculpture, works on paper, and specifically reconceived installations, all of which provides a deep and insightful look into the remarkable six-decade career of Saar.

While her work has been discussed in the context of black and feminist art, Still Tickin’ makes clear that Saar’s work has relevance in other social and cultural arenas as well. Still Tickin’ strongly resonates within the racially charged border state of Arizona, next to Mexico, with a Mexican American population in constant and daily confrontation with discrimination. While her work is certainly a reflection of the American melting pot and its related social issues, Saar’s art speaks to communities outside of the United States. Interestingly, the exhibition originated at the Museum De Domijnen in the Netherlands, another site of contested immigration and refugee influx. The exhibition represented the first solo exhibition of the artist at a European museum and included the first example of her work to enter a major European collection. 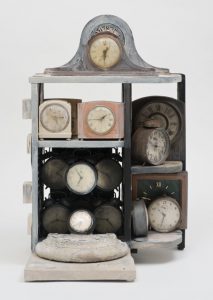 The exhibition in Scottsdale is organized thematically in three sections: Red Time Room (political and racial), Sanctified Visions (mysticism and ritual), and Bridge of Memory (nostalgia and memory). Yet like much of Saar’s life and work, the work transcends the designated themes. Domestic objects, black collectibles, clock and scale faces, birdcages, vintage objects, stars, moons, hands, globes, and ladders are seen consistently throughout the galleries. Each themed room contains works dating from the 1960s to the present, as if to demonstrate the persistence of racism in the United States over nearly sixty years. 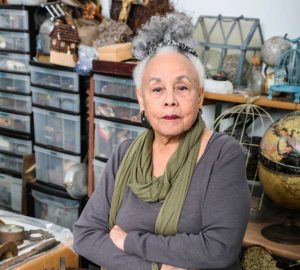 Born and raised in Los Angeles, and a lifelong Los Angelian, Saar graduated from UCLA in 1949 with a major in design. During the 1950s she created enamel jewelry before marrying and starting a family. In 1960, a printmaking class changed the direction of Saar’s artistic production as she found a genuine interest in experimenting with texture, pattern, and surface manipulation. The early training in design, printmaking, and even theater costume design plays a part in her work; Saar’s hand is precise and calculated and her understanding of material is exquisitely skillful.
Another widely-noted influence on Saar’s artistic development was the work of Joseph Cornell (1903–1972), which she first encountered in 1967 at the Pasadena Museum of California Art. Captivated by his use of boxes, she was already incorporating window frames with small compartments and then began searching secondhand stores and flea markets for unusual vessels.1 Scouting for objects in places like the Rose Bowl Flea Market led Saar to consider how she might use the offensive black collectibles that she encountered. Assemblage was also prevalent within the Los Angeles art community; it had become widely accepted following a 1961 Museum of Modern Art exhibition entitled The Art of Assemblage that brought the politically-themed works of California artists Ed Kienholz (1927–1994), Seymour Locke (1919–1994), George Herms (b. 1935), and Bruce Conner (1933–2008) wider recognition.

The period of Saar’s artistic maturation coincided with the intense social and cultural upheaval of the 1960s. Saar has noted that the 1968 assassination of Dr. Martin Luther King, Jr. and the rise of the Civil Rights movement caused her to shift her own artistic practice from printmaking to the work with found objects that first gained her notoriety in the art world.2 Another significant event for African Americans, especially in southern California, was the Watts rebellion of 1965—an episode born of police racism that stood as the most violent event until the Rodney King riots of 1992. The decade of the 1960s was also marked by cultural upheaval and saw the birth of radical new movements and ideologies such as Black Power, Black Is Beautiful, and black feminism.

These formative artistic experiences together with her abiding interest in race as subject matter came together in Saar’s remarkable assemblages, called the Liberation Series, 1972, which are her best-known works. With The Liberation of Aunt Jemima, Saar transformed the negative stereotype of willful nanny to a symbol of resistance and revolution. What began as a 1930s plastic mammy memo and pencil holder, in the hands of the artist, became a carefully constructed symbol of liberation and hope. A Black Power fist, a shotgun, and a swath of Kente cloth accompany the mammy object within a shrine-like box.

Although the Liberation series is not included in the exhibition, there are a number of objects instilled with the same social and racial concern in the section of the exhibition entitled Red Time Room. Close in spirit to The Liberation of Aunt Jemima, Dubl-Handi (Blue), 1998, an outdated washboard with a black mammy figure, is transformed by the addition of two guns placed carefully in the woman’s hands. The Weight of Persistent Racism (Patented), 2014, a balanced tower of two antique scales, topped with a clock and black crow, refers to both the Jim Crow segregation laws and the continued impact of racism on the black community. Saar notes of this work:

It was inspired by the recent events of violence against black people over the last two or three years. There are countless police shootings of black people—so I thought, this is how I can vent my anger and frustration. I used the scale as a physical object to determine that weight, how it just won’t go away, against black people, and others.3

Black Girls Window (1969) is a poignant and introspective mixed media work that is both autobiographical and reflective of the turbulent, racially-charged atmosphere of the 1960s. Using her own image as a black silhouette with hands pressed against the glass, Saar also includes her astrological signs, a tintype representing her own Irish grandmother and mixed heritage, a phrenology chart suggesting knowledge and thought, as well as a white skeleton manipulating a black skeleton. As an early work, it stands as a signifier of work to come and a collection of important ideas from her whole life on which Saar draws: self-reflection that intersects with spiritual and cultural consciousness.4

Both the concepts of assemblage and the spirituality of objects come into focus in the exhibition gallery entitled Sanctified Visions. The centerpiece, Mojotech, 1987, is a fifty-foot long urban landscape incorporating a variety of charms, amulets, and voodoo symbols with printed circuit boards, electronic apparatus, and assorted technological pieces. The monumental size and the unusual mix of materials reflect Saar’s fascination with the Watts Towers, conceived by Simon Rodia, in her childhood neighborhood. Begun in 1921 and completed in 1954, the three huge towers—the tallest is nearly one hundred feet high—are made of metal and concrete and embellished with colorful shards of glass, ceramics, and shells. For Saar, the towers embodied the spiritual and technological through found material. In Mojotech, Saar acts as a seer of culture, noting the then societal nascent obsession with technology, and bringing order and beauty to the unaesthetic machine-made forms by incorporating them into a stepped platform that recalls an altar.

Other works in the gallery incorporate Saar’s personal interest in metaphysics, palmistry, phrenology, and tarot, many of which are expressed as shrines or shrine-like objects. House of Fortune, 1988 consists of a table set with candles and palm imagery reminiscent of séance. Over the years, each new installation incorporates plants native to the exhibition locale, and in Scottsdale the table sits amid a pile of tumbleweeds. Between the dusty, dehydrated branches and the candles, the work seems to foretell a catastrophe.

The core of the exhibition is the middle gallery, aptly titled Bridge of Memory, which contains early, transformative, and recent works that intersect with the artist’s personal history and evokes a distinctly nostalgic tone. The earliest work is a childhood drawing from the 1930s and is entitled Girl. Two striking prints, Anticipation, 1961, and Girl Children, 1964, exude the strongly matriarchal traditions that underlie the artist’s work. The strength, beauty, and poise of the seated black pregnant woman in Anticipation looks forward to the birth of her children and perhaps to the future empowerment of black women, but also backwards to the strength of the women who came before.

Taking handkerchiefs left to her when a cherished aunt Hattie died and transforming them into art signified a break with printmaking and a move toward collage. The series begins with Aunt Hattie, 1977, and moves through a long list of important female figures in her life to whom Saar pays homage, including her own mother, a seamstress. As if traveling further into the psyche of the artist, Alpha and Omega, 2013, is a dark installation room—the belly of the exhibition. Hanging overhead is the frame of a boat illuminated by blue neon and casting a wide shadow below. Under the boat is a table covered precariously in melted candles and flanked by two chairs with clocks in the seats. In fact there is a clock opposite the entrance to the room, signifying the passing of time, and as the title suggests, the beginning and the end. Near the door, an infant bed is filled with glass balls to remind the viewer of the fragility of childhood, while the many birdcages and globes reflect how we can be trapped in our bodies and our minds. Yet with death, there is also life, and the cycle continues. Again and again, Saar seamlessly weaves together autobiographical elements with found historical objects.

In fact, the idea that objects contain emotional information is something in which Betye Saar firmly believes. In some instances, she reinforces the nature of her materials, and in other cases, she completely transforms their original use. What the exhibition makes clear is that the artist has stayed true to her roots, to her instincts, and to her love of collecting and making. Despite the fact that she might tell you she is not an “activist artist,” Saar has clearly influenced and inspired viewers who know that her work reveals many uncomfortable truths about our society and culture. As Angela Davis has asserted, the black women’s movement began with the Liberation of Aunt Jemima. Still Tickin’ is Betye Saar’s testament that we should critically examine ourselves and our society from historical, social, and personal vantage points.

About the Author(s): Jennifer McCabe is a doctoral candidate at the Herberger Institute of Design and the Arts, Arizona State University.