In post-Revolutionary New England, botany was one of the few areas of study that educated classes considered suitable for women. As the field increased in popularity at the turn of the eighteenth century, the number of introductory texts on botany multiplied, as did the emphasis on botanical illustration. The Massachusetts woman Orra White Hitchcock was an important figure among the small but impressive number of female botanical illustrators who flourished at this time. As was typical of the time, Orra primarily worked as an assistant for her husband, the scientist Edward Hitchcock, creating watercolor renderings of orchids, carnations, and violets that supported his field research in the natural sciences. These colorful floral sketches were recently the highlight of the exhibition Charting the Divine Plan: The Art of Orra White Hitchcock (1796–1863) at the American Folk Art Museum in New York (fig. 1). With its rich presentation of biographical material, including poems and personal letters, Charting the Divine Plan effectively situated Orra as a woman who found a way to create visual works while complying with expectations of female modesty and affability of the early republic. 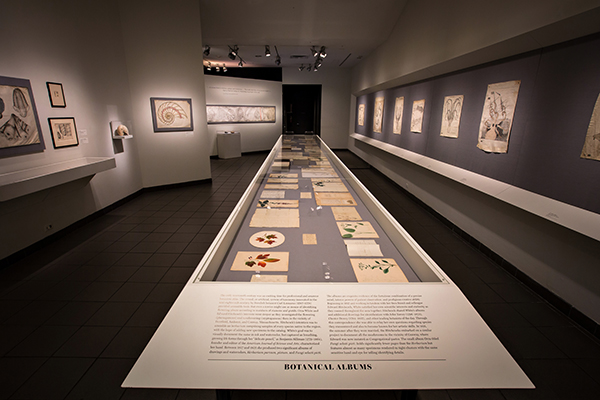 The exhibition was dedicated to Orra in name; however, it was her marriage to Edward that ultimately formed the central focus of the show. The museum devoted one full gallery to exhibiting fossils discovered by Edward and another to illustrations by Orra for his lectures on geology, and several wall labels also give lengthy accounts of Edward’s pedagogical work and chronic hypochondria. In the press release, likewise, the curator Stacey Hollander places the relationship of Orra and Edward in the foreground, describing their union as a “friendship and collaboration based on a bedrock of faith and science, mutual respect, close observation, and mental capacity for thelargest of ideas.”1 This statement, and the overall emphasis on Edward, gave a false impression that the marriage of Orra and Edward was thoroughly egalitarian. In fact, the exhibition referenced a period when the rights of married women were grossly limited. An example of the power imbalance in their marriage can even be found in Edward’s memoirs when he describes Orra’s willingness to work without pay: “Mrs. Hitchcock,” Edward writes, labored steadily “for thirty-six years, whenever called upon to supply my numerous demands [ . . . ] without the slightest pecuniary compensation, or the hope of artistic reputation.”2 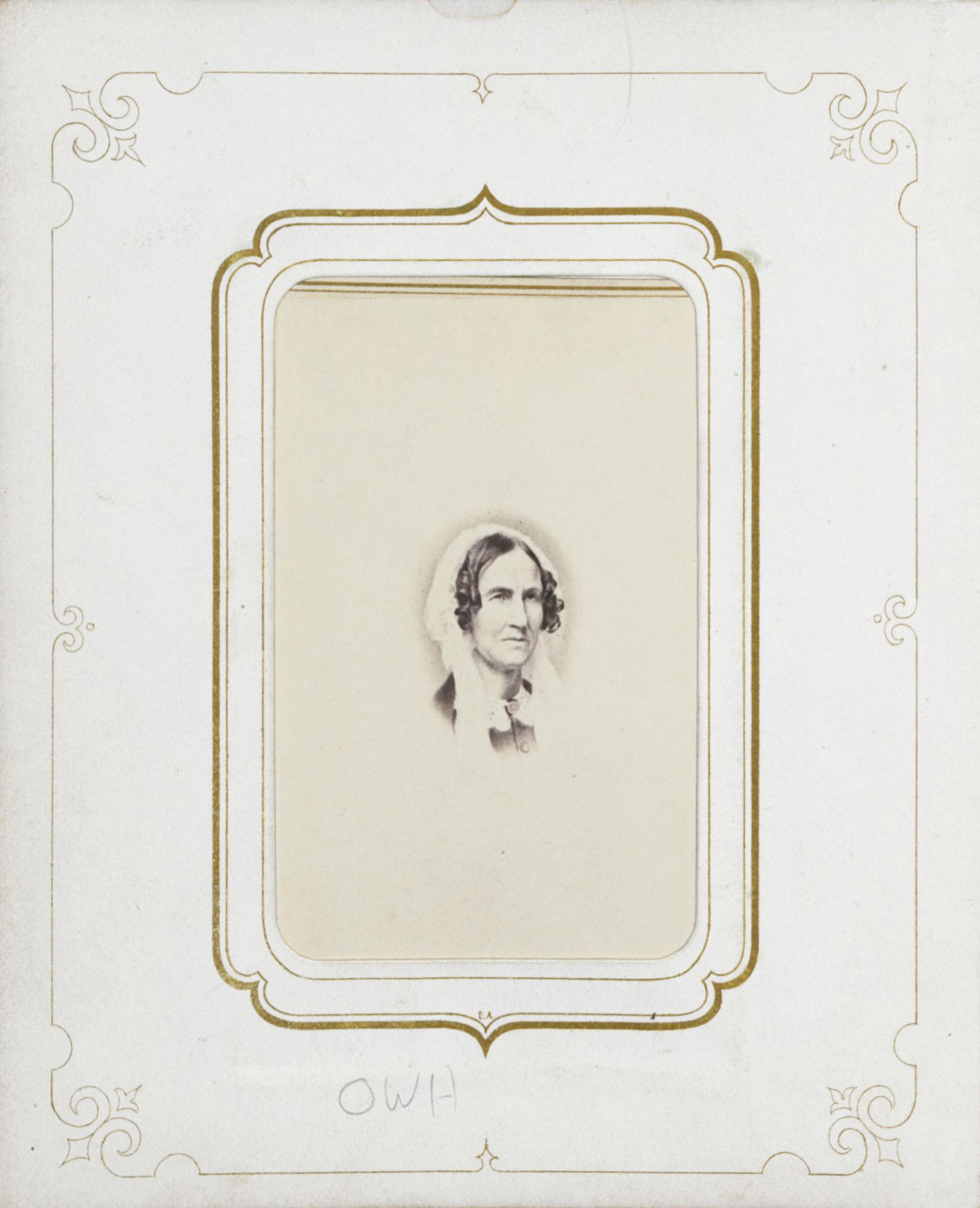 Charting the Divine Plan constituted a long overdue presentation of Orra’s work, yet a reticence to reference the inequities she faced gave a distorted view of female experience in the patriarchal societal circumstances in the early United States. A close look at the archival material that documents Orra’s life (fig. 2) and the botanical illustrations that were on view at the American Folk Art Museum tells a story that contradicts the exhibition narrative.

The exhibition showcased Orra’s botanical illustrations directly adjacent to its entrance. Filling a dozen glass cases in an annexed gallery (fig. 3), Orra’s loose paintings of flora and myriad grasses were presented alongside Orra’s earliest efforts in this area: an album entitled Herbarium Parvum, Pictum (1817–21), holding a set of sixty-four watercolor renderings of plants collected by Edward (fig. 4). Although one exhibition label implies that Orra took up botany due to her innate interest in the subject, one could argue that both Orra’s passion for the subject and the manner in which she represents each specimen were in fact influenced by social position. It is more plausible that Orra, like other women of the period, approached botany in large part because it was recommended as a fashionable and elevating form of leisure. Botany was indeed favored as a disciplining tool for young ladies; Jean-Jacques Rousseau’s book Letters on the Elements of Botany Addressed to a Lady helped popularize the subject as one that would occupy women without encouraging a public position or distracting from domestic life.3 Following Rousseau, the botanist Priscilla Wakefield writes that botany can serve as “a substitute for some of the trifling, not to say pernicious, objects that too frequently occupy the leisure of young ladies.”4 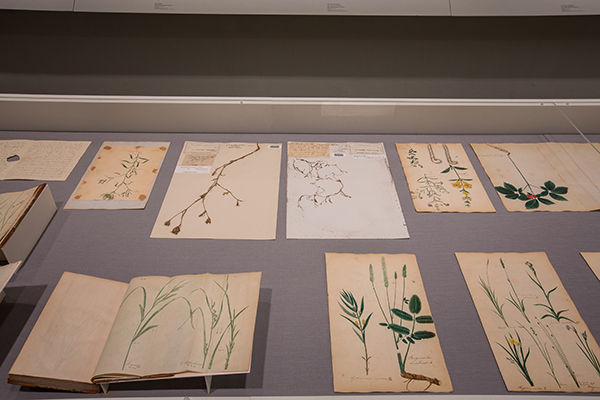 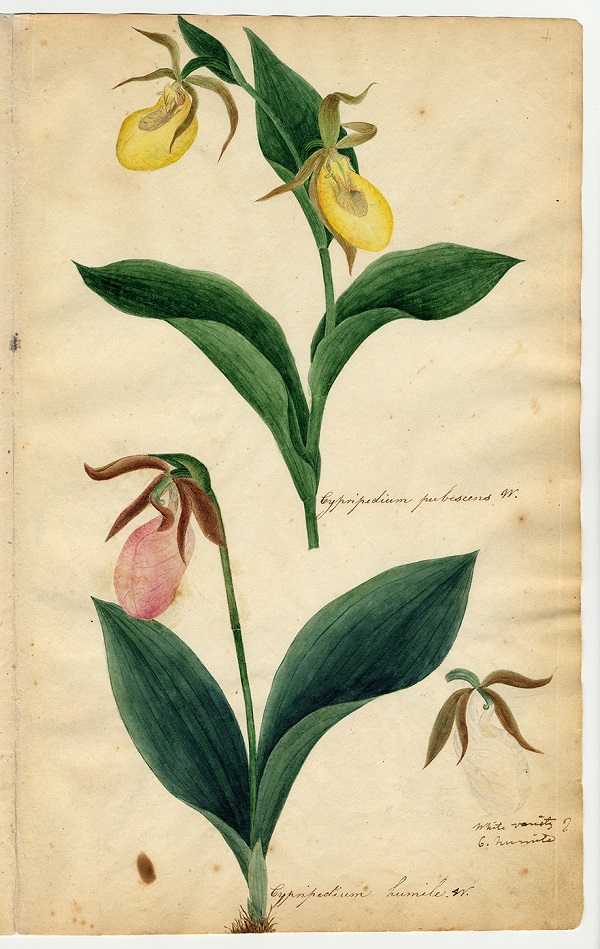 While women were encouraged to amuse themselves with the appearance of flowers and classification of plant varieties, the matter of plant reproduction remained another matter entirely. Eighteenth-century botanists often discussed flora in a way that incorrectly drew analogies between plant and human sexuality, anthropomorphizing plant reproduction by referring to the “marriages” between stamens and pistils.5 For this reason, texts on botany for women often glossed over discussions about plant reproduction. The botanist Henrietta Moriarty, among others, even argued that the topic of reproduction would lead to “ingenious speculations and allusions [ . . . ] dangerous to the young and ignorant [women]” and was therefore best omitted.6 Visitors to the American Folk Art Museum with specialist knowledge of botany will notice that Orra, too, unsexed the plants she rendered. In one watercolor with yellow and pink orchids, Orra completely removed the intricate reproductive organs of each flower, which, in truth, feature prominently in an orchid’s bearing. In Orra’s watercolor, one does not see the pollen-producing column that enlarges the topmost part of the orchid stem, but instead sees a single, smooth, and unencumbered petal.

Orra’s approach to botanical illustration and her elision of plant sexuality reflects a discomfort that is not incongruous with archival materials that allude to her distrust of marriage and her general melancholic disposition. In 1820, Orra wrote to a newlywed acquaintance on the subject of marriage, counseling her in verse and recommending that she check her hope of finding happiness in domestic life. Conceding that there are both “crosses” and “comfort” in marriage, Orra writes: “Still remember, bliss on earth / No mortal ever found.” A second earlier poem, entitled Disappointment (c. 1818), gives insight into Orra’s own disillusionment. Beginning with a description of a morning and its “thousand rainbow hues,” birdsong, and gentle breeze, Orra writes: “With breast elate, I press’d more near those scenes / And reached them as the sun its brightest point.” After this line, the anticipatory tone of the poem abates, and with it the natural landscape, once so splendid and within reach, fades: 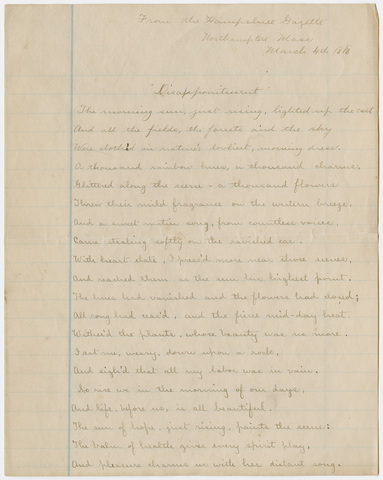 The hues had vanished and the flowers had closed
All song had ceas’d, and the fierce mid-day heat
Wither’d the plants, whose beauty was no more.
I sat me, weary, down upon a rock,
And sigh’d that all my labor was in vain. 7

The unusually long courtship between Orra and Edward may well have been the cause of her frustration, but, given her later advice on marriage, it is equally likely that this experience stemmed from conflicts between intellectual ambitions and societal assumptions that she would set aside her studies to become a wife.8 It is worth noting here that as a member of a literary society at Deerfield Academy, where she taught natural science and art after completing her education, Orra signed a collectively authored, deeply pessimistic tract that implies just this, warning young women against pursuing education for the sake of achievement. Women “attracted to the allurements of fortune and high life,” it reads, “soon find but a vacuum.”9

In this review, I have attempted to provide observations that are absent from the interpretive material provided by Charting the Divine Plan, and I suggest that Orra was less accepting of the prescribed female gender roles than the exhibition proposed. By framing Orra’s marriage to Edward as a “friendship and collaboration,” Hollander declines to acknowledge that the qualities of Orra that Charting the Divine Plan venerates—her modesty and affability—were cultivated under conditions that limited women’s self-expression. The basis of my critique is that the American Folk Art Museum represents Orra as a free woman who chose botany, marriage, and labor as an illustrator for her husband, but she was in fact not free. The material that reveals this is unsurprisingly limited in scope, and we catch only glimpses of the way Orra’s life was shaped by the disciplining aims of female education and social persuasion. Indeed, while we know Edward’s thoughts about Orra from his written mentions of her, we can never truly know Orra’s perspective, for in the hundreds of diary entries that survive, conceivably for fear of ostracization, she writes primarily of the weather in Central Massachusetts.

Despite Orra’s reputation as a successful woman artist in the early nineteenth century, I do not suspect that Charting the Divine Plan will be a rallying point for feminists anytime soon. Art historians, likewise, while seeing the value in the exhibition, may be disappointed that the museum chose to validate a perspective on female identity that reflects rather than challenges early republic patriarchy. While the reminder that the early republic was not a time characterized by egalitarianism may seem redundant, the bold thesis of Charting the Divine Plan demonstrates that this statement bears repeating.

About the Author(s): Amber Harper is a PhD Student in the Department of Art and Art History at Stanford University