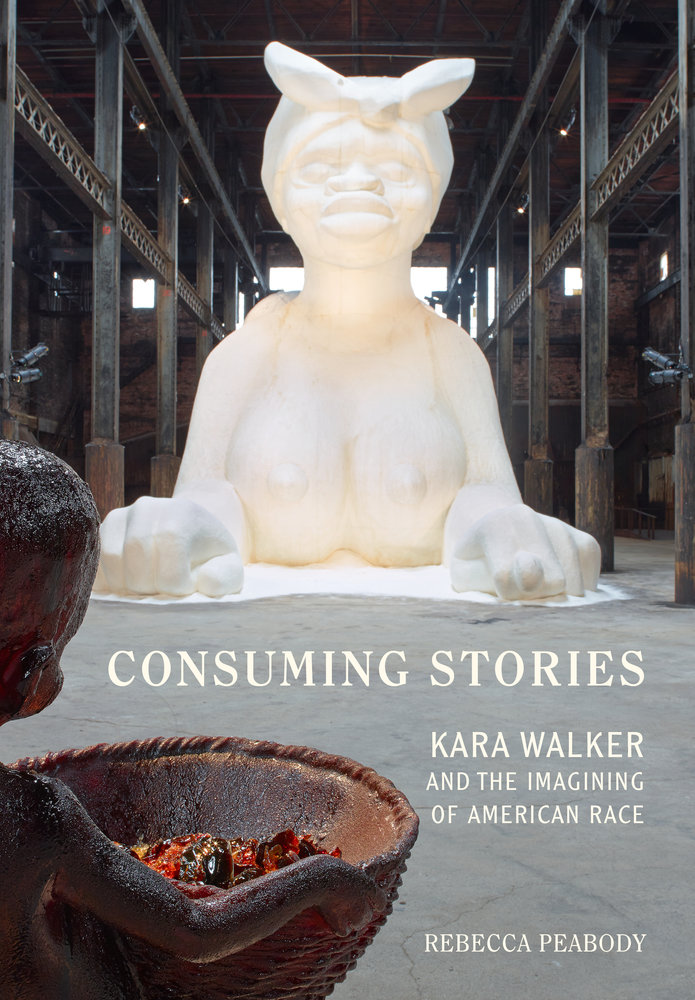 This compelling study by Rebecca Peabody convincingly explains Kara Walker’s narratives, clarifying how to read the stories conveyed in many of her works within historical context(s). She shows how they intersect with popular nineteenth- and twentieth-century narratives about race found in “literary fiction, Harlequin romance novels, television, and Hollywood films,” (2) as well as other visual culture, such as book illustrations. Examining Walker’s “tension between ambiguity and legibility, the power of narrative, and the presence of shared visual memory as a conceptual framework,” (22) Peabody observes that Walker’s “intertextual conversation and appropriation” (56) exposes “the ongoing process of American racial formation—how fiction operates as a form of national-making.”(2) Such a description also applies to Peabody’s text, which intersects with Walker’s images and the artist’s characteristically lengthy and descriptive, yet often ambiguous, titles of artworks, notes, and commentary from interviews, exhibition catalogues, artist’s books, and exhibitions. As Peabody accurately maintains, many scholars “make reference to” Walker’s “engagement with narrative fiction” (2) but fail to fully flesh out how to understand Walker’s confusing, haunting, arresting, and often scatological images, which force the viewer to confront the “alignments of race, power, and desire” in the United States. (3) She extends our understanding of many of Walker’s artworks that other scholars have discussed while focusing on some that have not received as much scholarly attention. Besides elaborating upon the intersection between Walker’s images and narratives in American culture, Peabody also uniquely considers how various international cultures understand her works within the context of the United States, global history, and concerns about race.

Peabody begins each chapter of her engrossing study with a captivating description of one particular image by Walker, from which she fans outward to consider its meanings within the broader culture. Chapter one starts with The End of Uncle Tom and the Grand Allegorical Tableau of Eva in Heaven (1995), a work others have discussed in depth, most notably Gwendolyn DuBois Shaw.1 Peabody identifies each of the figures within Walker’s panorama, derived from Harriet Beecher Stowe’s Uncle Tom’s Cabin (1852), to show the artist’s “engagement with the novel but also what her resistance to, and reiteration of, the narrative reveals about a 150-year tradition of retelling this epic work.” (27) The author highlights ways in which Walker “imagined, constructed, consumed, and reproduced” the “racialized identity” in the novel by examining book illustrations and poems—such as one by E. E. Cummings from 1935—as well as television productions, scholars’ discussions of abolitionist novels, and images within Walker’s silhouette that continue and expand upon Stowe’s story. (27) Peabody argues that Walker consequently makes “it [Uncle Tom’s Cabin] something greater than the original, showing some of the startling potentialities embedded in familiar characters” to expose and challenge how race is constructed throughout Stowe’s text and its reiterations. (51)

In chapter two, Peabody describes and analyzes “a classificatory illustration from the nineteenth century” of black female genitalia, along with an elaborate text by Walker that the artist included in her book Kara Walker: The Renaissance Society at the University of Chicago (1997). (53) Peabody places this photocopied and collaged image—derived from Cesare Lombruso and Guillaume Gerraro’s book Criminal Woman, the Prostitute, and the Normal Woman, 1893—within the context of the neo-slave narrative genre. She explains how this troubling “scientific” image, which as far as I know no one else has analyzed, exposes ways in “which non-Western women were viewed, touched, analyzed—after their deaths—dissected and displayed, specifically the body and genitalia of Sara Baartman,” also known as the Hottentot Venus. (56) Peabody discusses works by other artists in the twentieth- and twenty-first century who similarly focus on Baartman’s “life and legacy” to examine how Walker and others “call into question . . . Baartman’s full humanity,” on the one hand, and objectification, on the other, to “redress a history of racialized violence.” (57) I was especially impressed with and convinced by Peabody’s suggestion that Walker in her illustration used strategies associated with Andy Warhol, such as “repetition, aestheticization, and contextual defamiliarization,” to indicate her similar interrogation of history and “to conjure cultural depth by participating in, yet drawing critical attention to, public fantasies about race, violence, and sexuality.” (72) Peabody also convincingly compares Walker’s image to Toni Morrison’s novel Beloved (1987) and its movie adaptation (1998) to expose what is “at stake in telling traumatic stories” that involve both horror and pleasure. (83)

Walker’s writing of texts, creation of images, and reproduction of excerpts from movies that, according to Peabody, emulate Harlequin romance novels, is the focus of chapter three. Peabody explains the ways in which abstract ideas of race, power, desire, and gender are reified in Walker’s visual and literary works and how their ambiguities result in the inability to determine whether she “supports, or undermines, racialized assumptions about sex, power, and love” embedded in these romance novels. (93) Peabody examines the confusing coercive and consensual sexual behaviors found in a number of Walker’s works. These include silhouettes such as The Battle of Atlanta: Being the Narrative of a Negress in the Flames of Desire—A Reconstruction (1995), which Peabody convincingly shows derives from a Harlequin romance novel by Barbara Ferry Johnson, Heirs of Love (1980); and Before the Battle (Chickin’ Dumplin’), 1995, as well as her mixed media and cut paper on board, American Primitives, 2001. This contains an elaborate poem by Walker that further underscores the way in which the images merge “desire, power, and vengeance.” (101) Peabody creatively argues that Walker, by reproducing a film still from The Balcony, 1963, in her book Kara Walker (cited above), created “a new and discrete work of art” in which similar behaviors between a black woman and white man derived from romance novels take place. They reveal how “race, racism and slavery are not foils for love” but instead “components of love” in which oppression and dominance are played out by both white men and black women. (99) And Peabody examines another series of reproductions of images from film stills (including again The Balcony, as well as Monster’s Ball, 2001), advertisements, clippings from news media, and book covers from romance novels found in Walker’s visual essay, “Chronology of Black Suffering: Images and Notes, 1992–2007” for Kara Walker: My Complement, My Enemy, My Oppressor, My Love, 2007.2 She argues that this visual essay, too, forms a discrete work of art. Peabody reiterates the ways in which Walker “gestures toward” and “critiques” the romance novels and foregrounds interracial love, whereby power, erotic desire, and submission provoke uneasiness in readers and viewers. (109)

Chapter four examines how and why Walker’s works have been commissioned by, exhibited in, and critiqued among international organizations, critics, and contexts: South America, Europe, Asia, the Middle East, and Australia. Walker’s Safety Curtain, a project of the Museum of Progress based in Vienna, Austria, and installed at that city’s State Opera, 1998–99, is the major image Peabody examines here. Again, the author interweaves other works and texts to support her argument that Walker collapses time so that “reinscriptions of race and gender are suddenly alive and relevant in the twenty-first century” and exceed “U.S.-centric cultural boundaries.” (112, 133) I especially liked Peabody’s readings of the images found in Safety Curtain that address blackness, Jewishness, and Turkishness in “historical stereotypes, fairy tales, children’s stories, Greek mythology, and the opera.” (128) Peabody astutely connects Walker’s Curtain to Rudolf Eisenmenger’s 1955 safety curtain, which illustrates the story of Orpheus and Eurydice in demonstration of the power of music. Her reading of Walker’s appropriation of advertisements for Meinl-Kaffee coffee, an Austrian brand with a wide-smiling black servant on the label that first appeared as the company logo in 1924, shows how the appropriation disrupts the construction of race through its overemphasis of “blackness” in comparison to Eurydice’s “whiteness”—both are hyberbolic and artificial. (123) Peabody once again examines every image and detail in this monumental curtain in relation to Walker’s studies in ways that are too elaborate to reiterate here. But, as in the rest of the book, I felt compelled to constantly look between Peabody’s text and Walker’s images to “read” the meanings. They start “with documents that seem benign, banal, or historically distant and through juxtaposition” lead to an “alignment of race with power, and the disenfranchisement that results [and] happens at multiple cultural sites.” (129) Walker “intervenes at precise moments when visual culture and racism come together.” (129)

Walker’s storytelling in video and film are the subject of chapter five. Here Peabody elaborates upon what Lorraine Cox and I separately discuss elsewhere.3 But she expands our discussions by focusing on Walker’s use of puppeteers to interrupt the stories, how the videos and films extend the potential for her characters and narrations, the ways in which different exhibition venues resulted in varied presentations, and how this affected the impact upon and understanding by viewers. She also examines how these works “critique . . . the expectations viewers bring to storytelling that engages with slavery,” and how their “complicity—as story consumers” result in “the conflation of history and fantasy.” (141)

In her conclusion, which examines Walker’s A Subtlety or the Marvelous Sugar Baby, I wish Peabody had elaborated on the complex meanings of the work’s extended title: an Homage to the unpaid and overworked Artisans who have refined our Sweet tastes from the cane fields to the Kitchens of the New World on the Occasion of the demolition of the Domino Sugar Refining Plant.4 Peabody does explain how the sculpture “is about ruins and about hope” and appropriately discusses Walker’s Digital Sugar Baby, an interactive website in which viewers could add their photographs of the installation, and An Audience, a video that shows how viewers interacted with her sculptures. (161) It is possible that Peabody saw Walker’s elaborate installation of the sphinx made of sugar and the fifteen five-foot-tall processional figures, comprised of either a mixture of brown sugar, corn syrup, and water or resin coated in molasses and sugar, so close to the completion of her book manuscript that she did not have time to elaborate on the meanings of the work and its varied narratives. This criticism, however, should not detract from the overall assessment that this excellent book contributes greatly to the plethora of existing scholarship on Kara Walker.

About the Author(s): Vivien Green Fryd is Professor of Art History at Vanderbilt University.