Where Is Imperial (British) America?

The question “When and where does colonial America end?” brought to mind a related question, “When and where does imperial (British) America end?”1 Anglo-American settlers in colonial British America understood themselves to be British. Colonists, yes, but always British and often agents of the British Empire. However, empire frequently gets left out of colonial American art history, even though the relationship between the imperial and colonial continues to shape society and the field. While I focus here on British America, many of the points remain relevant in a transimperial context. 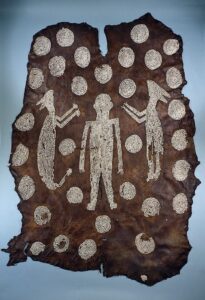 For me, “imperial art” denotes visual culture that furthers an imperial agenda and is broad in geographical scope. “Colonial art” implies art created in the colonies with a limited audience. The colonial framework often leads us to think insularly, within the geopolitical borders of individual colonies and what became the United States. When we think about the imperial, the field of inquiry expands to encompass the relationship between colony, metropole, other colonial regions, the global networks that sustained empire, and competing polities. Yet, imperial frameworks often underplay local circumstances and relegate the colonial to the periphery. Here, I offer two examples of artworks that highlight the importance of considering both the colonial and the imperial, problematize the idea that the colonial was peripheral, and show the continuing impact of the British Empire in American art.

First, I consider “Powhatan’s Mantle” (fig. 1), an American object, now located in England, with an imperial legacy and collecting history. The cloak is made of four deerskin hides sewn together and decorated with Marginella shells depicting a central humanoid figure flanked by two animals, possibly a white-tailed deer and wolf. Thirty-four spirals cover the ground. The mantle has been associated with Wahunsenacawh (called Powhatan by the British)—leader of the Powhatan Confederacy at the time of British settlement at Jamestown—since it was first documented in 1638 in the collection of the English naturalist John Tradescant. The mantle is now in the collection of the Ashmolean Museum at Oxford University. The mantle dates to the early period of British settlement in Virginia, and when exactly it came into Tradescant’s possession is unclear. Its origins and the significance of the design are unrecorded. Its value to Tradescant and then to Elias Ashmole (founder of the Ashmolean Museum) rested in its “exoticism” and rarity.2 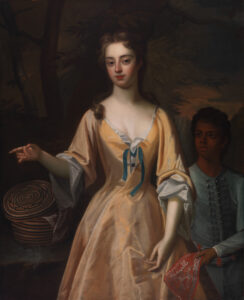 Powhatan’s Mantle is a familiar artwork; the way that it is generally framed in the history of American art is revealing of colonialist assumptions. Two major American art survey textbooks, American Encounters and Framing America, both illustrate Powhatan’s Mantle, suggesting that it is canon. American Encounters’ discussion of it is limited to one paragraph acknowledging its existence and that we know very little about it. Framing America provides slightly more information and includes more context about the significant role that the Powhatan Confederacy played in the settlement of Virginia.3 In both cases, Powhatan’s Mantle is presented as a mysterious colonial artifact made by the Powhatans, a group of people whose political power diminished soon after British settlement.

Viewed as an imperial artifact, in contrast, Powhatan’s Mantle is symbolic of Indigenous power, rather than simply survival, and acts a reminder of Indigenous mobility in the colonial period. It was made in the context of early cultural encounters between two sovereign polities, when the Powhatan Confederacy was a powerful entity. Even its association with Wahunsenacawh is a recognition of the man’s authority and reputation amongst the English. Somehow, the mantle arrived in London, traveling a similar path that many Indigenous people themselves did. The Powhatan Confederacy sent emissaries to London initially in 1616, the first of many Indigenous delegations that traveled to London from America.4 Powhatan’s Mantle exists because it and its makers both circulated in an imperial network, allowing the object to claim a position in an imperial center where it was preserved.

We learn more about the interplay of imperial and colonial dynamics by contrasting Powhatan’s Mantle and its association with Indigenous power with the painting Lucy Parke Byrd (fig. 2), an image portraying settler-colonial authority. This 1716 portrait represents a Virginia-born woman. She was the daughter of Daniel Parke II, a Virginia-born planter who became the Royal Governor of the Leeward Islands following military service during the War of Spanish Succession. Lucy married William Byrd II, another Virginia-born planter and trader. She was painted by an unknown artist in England while her husband was testifying about trade and Anglo-Indigenous relations at the Board of Trade and Plantations.5 Lucy Parke Byrd appears in her portrait with trappings of the British Empire. She wears a yellow silk wrap dress fastened with a jeweled clasp and a blue ribbon over a white chemise, nipped in at the waist; her fashion and appearance are markers of her Englishness, differentiating her from the Indigenous Americans and enslaved Africans also living in Virginia. She appears with a non-white attendant, presumably enslaved. The young man’s racial identity is ambiguous, and he wears an Ottoman-inspired costume. He proffers an elaborately embroidered textile. Though the origins of this textile are unknown, it could be from Asia, Europe, or North Africa. Beneath Byrd’s pointing right hand appears a coiled grass basket of the type made by a Southeastern Indigenous woman, likely a member of one of the communities with whom Byrd’s husband traded. White English linen peeks out of the basket, indicating that she appropriated it for sewing. Byrd stands in a forest evoking the American wilderness. She is a British beauty with access to global commodities who is “civilizing” America in service to the British Empire.

Lucy Parke Byrd references slavery, trade, and land dispossession. It was painted in England during a period of political tension between Virginia and the British Parliament and visualizes sources of that tension: trade and Anglo-Indigenous relations. The imagery of the portrait unmistakably references global imperial trade and the mission of the British Empire to exert control over territory. Simultaneously, however, it is a localized object, referencing concerns specific to Virginia, and it is additionally a transcolonial object, due to its facture in England and the subject’s family history.

Unlike Powhatan’s Mantle, which is well known because of its rarity, the ubiquity of colonial portraits has contributed to the field’s dismissal of Lucy Parke Byrd. Although the embellished deerskin is part of an American culture, nothing comparable to it survives in a US museum. This absence suggests that settler-colonists did not value such works enough to preserve them for the future, revealing a colonial bias in collecting and preservation that persists in museum institutions. The disparities in survival at museums reflect a longer history of settler-colonial violence that has both imperial and colonial components. In contrast, as the result of different biases, the striking portrait of Lucy Parke Byrd has rarely been published or discussed from an art-historical perspective. Though the painting depicts a colonial American woman, it was painted in England by an unknown artist and predates the “consumer revolution” of the 1740s, dating earlier than the time period on which most historians of American art focus. Similarly, British art historians have neglected the portrait also because of its unknown creator and colonial subject. Further, the portrait remained in a private collection for generations before acquisition by the Virginia Museum of History & Culture. State history museums tend to have local audiences, and art historians often pay less attention to artworks that are not in art museums and have traditionally neglected regions in the South, including Virginia. However, when we approach colonial visual culture as imperial, images like Lucy Parke Byrd become more important.

Putting Powhatan’s Mantle in conversation with Lucy Parke Byrd fruitfully reveals assumptions, biases, and hierarchies in the field of colonial American art that are a legacy of an imperial value system and provides an opportunity to interrogate them. Together, these works invite us to decenter the colonial to account for the transatlantic locations of their creation and preservation. They encourage us to think about the mobility of historical actors and materials as well as the biases that account for how each object was documented. Lastly, they lead us to question how the ubiquity of portraits of elite white colonists has normalized an approach to colonial visual culture that often overlooks the influence and perspectives of non-white historical actors. Powhatan’s Mantle reminds us of the presence of Indigenous people not only in Virginia but throughout the British Empire. The presence of an enslaved figure and an Indigenous-made basket in Lucy Parke Byrd asserts that non-white peoples were omnipresent, even if colonial artists rarely represented them.

In many ways, imperial colonial America is still with us today. Hallmarks of early modern empire include the rise of capitalism and its attendant economic and social disparities, slavery and coerced labor, settler colonialism, nationalism, and governance by a centralized state power. These systems continue to impact modern America, American visual culture, and museum practices. Though the (British) imperial period arguably ended in the United States in 1776, it provided a model for the US imperial approach to governance and expansion that continues to operate today.6 Artworks such as Powhatan’s Mantle and Lucy Parke Byrd provide a window into the origins and continuation of imperialism in American art and culture.

February 10, 2022: An endnote was added to disclose the author’s affiliation with Panorama’s parent organization, the Association of Historians of American Art.

About the Author(s): Janine Yorimoto Boldt is Associate Curator of American Art at the Chazen Museum of Art, University of Wisconsin–Madison