The Pervasive Nature of Colonialism and Our Disciplinary Attachment to It

When approaching the colonial world, geographical designations become a shorthand for methodological and theoretical attitudes. As a Latin American scholar, one of the first issues I encounter when dialoguing with the US academy is about naming. “Americanists” in the United States are broadly understood (although not in every space) as scholars focused on the art history of the United States. In Latin America, an americanista is a category of self-identification that defines a disciplinary focus on the Americas at large. This is reflected in one of the oldest conferences of the continent, the International Congress of Americanists (ICA), which was established in France in 1857 and, from its inception, has been defined as an interdisciplinary humanities and social sciences conference, drawing hundreds of scholars from around the world. This difference in nomenclature between the United States and Latin America marks out two different versions of “America,” grounded in two different colonialist perspectives: one is the designation given by European invaders who named the large geographical area of the continent “America” or “the Americas”; the other is the neocolonial definition of the independent nation of the United States. This self-allocation of the moniker “America” ascribes the United States, even in critical disciplinary spaces, with the voice of an entire continent.1

When discussing Spanish colonies in Latin America, the ones my work centers on, scholars will align themselves with the term “viceregal” or virreinal to highlight the administrative divisions placed by colonizers on the geographical territories of the Americas (for example, the Viceroyalty of New Spain, which encompassed the territories of present-day Mexico and parts of the United States, the Philippines, and Guam), or they will choose the broader term “colonial” to refer to a specific period and its sociopolitical context (for example, colonial Latin America). Both terms try to wrestle with the complexities of terminologies that relate to a period in which colonialism—as the imposition of a political and cultural system and the concurrent persecution and destruction of preexistent, or different, sociopolitical structures—functioned.

While the methodological and political differences between those two approaches have distinct histories within the United States and Latin America, they also have something in common: they both are in tension with the succeeding colonial structures replicated in the construction of nation-states within our continent. New nation-states and republics throughout the Americas did not break with the colonial apparatuses or ideologies. On the contrary, they perpetuated and, in several cases, amplified colonial policies within those territories from the nineteenth century onward.2 In this context, what we call “colonial art” served a distinctive purpose within the early neocolonial formation of novel nation-states as a reminder of the old regime and as a symbol of what should be left behind. Today, shifting disciplinary trends and methodologies push scholars to navigate nationalism, the revitalization of the colonial period, and, most recently, a collective impetus for thinking about decolonization in their consideration of “colonial art” and to confront the legacies of oppression continued by contemporary nation-states.3

When addressing the issue of the disciplinary, and sometimes arbitrary, boundaries within the study of the centuries of direct colonial occupation in the Americas—before thinking in geographical ways or comparative ways, like many recent examinations have proposed within the study of the art of colonial Latin America and the United States—perhaps the first step is to acknowledge the continuity and persistence of those models of colonial occupation. Those categories that unify territories at the same time put into perspective our chronological boundaries. This does not mean that as scholars of the past we should start creating cross-temporal studies automatically or irreflexively, but it means that we should tackle the other colonial institutions that still affect our scholarship but that we do not necessarily investigate with the same rigor, most specifically the nation-state model and even the nationalistic use of the colonial past within the histories of our subdisciplines.

The neocolonial project of nation-states directly influences our positionality, as scholars and disciplines, and frames scholarly inquiry. An individual/discipline’s adscription or identification with the division of geographical units that have direct connections to colonial projects (such as “United States,” “Chile,” “Mexico,” “Latin America,” etc.), the sources used, and the ways those sources are informed by and participate in the continuity of colonial projects reaffirms an individual/discipline’s participation in those structures, whether intentional or not. Narratives of patrimonial or cultural heritage add to this, as such designations determine what available resources are dedicated to the preservation and exhibition of works of art done under centuries of colonial occupation and establish what objects, cultures, and perspectives are deemed worthy of preservation. For example, an anthropological approach historically separated Indigenous objects and traditions in many countries of the Americas from the idea of patria or “fatherland” represented in other objects or historical events. Such tendencies are changing in great part because of conversations related to the study of the artistic and cultural productions of Indigenous cultures and the colonial period.

Acknowledging the sociopolitical and cultural contexts of different territories of the Americas occupied by colonial imperial powers can create fruitful avenues for the study of artistic objects. In my work, the focus on the category of “Andean art,” for example, allows for dialogue and acknowledgment of Indigenous knowledge as well as other geographical and cultural structures not limited to colonial or nation-state models. Depending on the context, “Andean” encompasses territories from Colombia to Chile and, in particular, highlights the cultural commonalities of local communities as determined by the Andean landscape. It also connects distant regions and avoids sociopolitical divisions that may derive from the colonial process, including virreinatos and national borders. Studying Andean understandings of space and nature and their manifestations in landscape paintings created between the sixteenth and eighteenth centuries underscores epistemological differences between Indigenous understandings of space and nature from those of the Spanish administrative and political powers. The possibility of discussing an “Andean” understanding of space within a depicted landscape is linked to the core strategies of art history and visual studies, which view visual objects as sites to be analyzed. At the same time, the creation of what “Andean” is and what it constitutes is also a process that has been deeply connected to responses to, or echoes of, nationalist projects of the nation-states of the region of the Andes.4 Just as scholars are cognizant of the nuances and complexities of colonial realities, especially when dealing with artists or works made in the context of colonial oppression, we should also examine how our methodological and theoretical scaffolding repeats or naturalizes aspects of the long effects of colonialism. 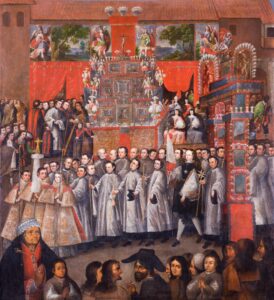 If we focus on the specific limits of “colonial America”—both temporal and chronological—how can dialogue with the continent at large benefit a collective understanding of the enduring phenomena of colonialism from the perspective of art history and visual studies? Comparative efforts in the past have created thematic connections that highlight commonalities across subdisciplinary borders.5 Perhaps interdisciplinary research on the broadly understood “early modern world” or the still somewhat imperially focused Atlantic or Pacific worlds model a focus on connections and exchange that allow for the explicit questioning of geographic borders. However, if we do not center the pervasive endurance of the colonial model, those comparative or decentering efforts fall flat in acknowledging that, in our own praxis, we are repeating or reusing the very colonial structures that we study.

In my scholarship on the depiction of nature and landscape models in seventeenth-century painting, I uncover colonial relations based on visual models, pictorial formats, or the patron/artist dynamic while, at the same time, deconstructing monolithic accounts of the period by focusing on the agency of Indigenous artists, the innovation of visual sources, and the multiplicity of roles that natural depictions played in seventeenth-century Cuzquenian painting (figs. 1 and 2). It is important to acknowledge that not every scholar who focuses on the colonial period is critical of colonialism. A foundational reckoning with the ethical and political implications of our own research could start to dismantle or make more permeable some of our own disciplinary limits; in so doing, we might construct a deeper and more responsible understanding of what we call “colonial art” and how we study it.

Cite this article: Natalia Vargas Márquez, “The Pervasive Nature of Colonialism and Our Disciplinary Attachment to It,” in “When and Where Does Colonial America End?” Colloquim, Panorama: Journal of the Association of Historians of American Art 7, no. 2 (Fall 2021), https://doi.org/10.24926/24716839.12739.

About the Author(s): Natalia Vargas Márquez is Visiting Assistant Professor of Art History at DePauw University