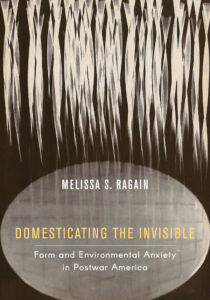 About two-thirds of the way through her recent book, Domesticating the Invisible: Form and Environmental Anxiety in Postwar America, author Melissa S. Ragain describes the Richard Budelis installation Eel Track. Featured in Boston’s Museum of Fine Arts’ 1972 Elements of Art exhibition, Eel Track “required initial conditioning of the eels by handlers . . . and frequent upkeep by Budelis during the show to make sure there was a constant flow of oxygen . . . Too many eels, too little oxygen, or the wrong kind of food would unsettle the delicate balance of the installation and lead to the death of the ichthyic participants” (156). Eel Track provides an apt metaphor for the condition of “environmental anxiety” and its aesthetic encoding that undergirds the period and site of Ragain’s study—the 1960s and 1970s in Boston, Massachusetts. While “environmental anxiety” is a precursor to the conditions of the present period of climate crisis, concern for the environment in the earlier period was largely due to the looming specter of radiation, chemical toxicity, urban disaffection and its coordinated social ills, and a capitalist culture of disposability. Against all these overlapping forces, however, artists, architects, and others in the visual field touted the promise of good design and its potential to affect society for the better. Much like the “delicate balance” of Eel Track, in which the handlers and their elaborate technological apparatus ensured the safety of the eels and their environment, prevailing design wisdom of the day advocated for an ethical symbiosis between humans and their environment.

Domesticating the Invisible presents readers with an alternate history of the postwar period, countering both the dominant narrative of the New York art world and the “Hippie Modernist” paradigm of techno-utopianism. The latter has received focused attention in recent years due to the work of scholars such as James Nisbet, Felicity D. Scott, and Fred Turner, as well as the Walker Art Center’s 2015 Hippie Modernism exhibition. Ragain’s study covers the same time period but focuses readers’ attention on a very different cast of characters. By centering Boston and Cambridge, she draws renewed and new-found attention to a set of MIT- and Harvard-affiliated artistic interlocutors, including the Hungarian artist Gyorgy Kepes, Austrian architectural historian Eduard Sekler, German art psychologist Rudolf Arnheim, and American artist Jack Burnham. This is clearly a list dominated by male European emigres formerly affiliated with the Bauhaus, and as such it makes no moves toward diversifying the modernist canon. But Ragain does not claim to do so; instead, she focuses on these figures’ contributions to the theorization of visual form during an era when such considerations necessarily intersected with invisible environmental threats to the survival of the human species. Domesticating the Invisible argues that environmental aesthetics (steeped in the language of systems theory and cybernetics) did not make a clean break with aesthetic formalism; instead, artists in this transitional period relied upon what Ragain terms “scientific formalism” to “reorient critical discourse away from notions of aesthetic autonomy” (7).

Ragain’s text is organized into five chapters, each focusing loosely on a different theorist/practitioner and his approach to form. The first chapter, “Visual Field Theory,” charts the theorization of visual form in the United States from Arthur Wesley Dow’s 1899 treatise Composition to Kepes’s 1944 Language of Vision, which was widely cited in art pedagogy through the 1970s. Ragain maintains that the scientific formalist approach offered by Kepes is both abstract and mimetic—an abstraction rooted in a description of and orientation to the natural world rather than the inner psyche of the artist. The second chapter, “Reality’s Invisible,” focuses on the period when Sekler headed the Visual and Environmental Studies (VES) program at Harvard, steering it away from its Bauhaus origins. The chapter takes its title from a 1971 Robert Fulton film documenting the idiosyncratic development of the VES program, including its ongoing negotiation of the artist’s role in society and implicit rejection of professionalization in favor of the artist as “problem-solver.” Chapter 3, “The Arts of Environment,” contrasts Harvard’s approach with that of MIT. Here, Ragain returns to Kepes, this time detailing his leadership of the Center for Advanced Visual Studies (CAVS). CAVS championed a move out of the classroom and into the urban environment, asking its fellows and students to design a new and “lyrical monumentality” within the cityscape (100). Chapter 4, on Arnheim’s “cellular metaphor,” breaks down the Harvard art psychologist’s approach to aesthetic form and its relationship to a “burgeoning information culture” and its “antivisual vocabulary” along the lines of empathy, entropy, and elementality (135). The “cellular” model of art, Ragain argues, “offered one way out of both the biological-developmental models of modernist progress and the geological-entropic model of Smithsonian heat death” (161). Finally, chapter 5 touches on Kepes a final time to contrast his Bauhaus romanticism with the “disposability” of Burnham’s work. Ragain traces three key influences on Burnham’s influential theory of systems aesthetics and successfully argues that his approach is not a departure from formal considerations but rather an expansion of form meant to incorporate the vast, interlocking demands of a system.

Throughout the book, Ragain interrogates her subjects’ relationship to research institutions and the role of art education within them rather than to an increasingly corporate-driven art world, which often frames discussion around art of this period. In doing so, she deftly charts how scientific developments and the titular “environmental anxiety” of the 1960s and 1970s affected not only the direction of art production but the manner in which it was packaged and presented to later generations. As Ragain argues, art instruction in the university was a powerful setting for “encouraging students to think of themselves as environmental agents” (8). Both MIT and Harvard, however, were nontraditional sites for art pedagogy. While these two examples form an “emerging paradigm of the research university as it developed” out of liberal arts and technical models, both were beset with tangible limitations for visual production, including the provincial nature of the Boston art scene (compared to New York) and the marginal role of art education within each institution (8). Harvard sought to train art “dilettantes” instead of professionals, while MIT’s engineering culture meant that visual arts classes, taken primarily as electives, mainly reinforced scientific methods and training. Ragain traces how, over the course of this period, those specific limitations were promoted as key strengths of the programs, as each, in its own way, provided an alternative to more mainstream training.

As a result of the programs’ preferred methodologies, the vast majority of the work in Ragain’s study is no longer extant. Instead, the pages of Domesticating the Invisible are rife with project proposals, diagrams from out-of-print art instruction manuals, and black-and-white photographic documentation of ephemeral installations, such as the aforementioned Eel Track. Ragain’s prose brings these long-lost artistic visions to life, as the book contains detailed descriptions of many forgotten projects. In the chapter on MIT, for example, she conjures up an urban cityscape-turned-ecological-playground, an alternative vision of Cambridge and Boston as designed by artist-engineers. What really activates these ephemeral art and design works, however, is the intellectual history that they enact. Each artwork or exhibition Ragain discusses serves up an argument for an understanding of form and its relationship to society, whether according to Kepes, Arnheim, or the other key figures who shaped art pedagogy in this period. As such, this study crosses disciplinary boundaries, offering a glimpse into the intersections between art, architecture, design, urban planning, and scientific understandings of the visual world.

As a study on art education and pedagogical philosophies, Domesticating the Invisible is tasked with making sense of a vast network of practitioners, faculty, and university administrators. One question that arises, however, is how to consider the student perspective. In her chapter on Harvard’s program, Ragain writes that VES assumed the future role of students as “decision-makers” rather than professional artists (86). This is a common prescription for students at elite schools, and it assumes a student body of a certain class background, race, and (at the time) gender. The investigation is thus really about how art pedagogy developed not only at educational institutions but at elite institutions. The class dynamics of this era, and the resulting assumptions regarding the future importance and impact of the work created, lie just beneath the surface of these chapters. Ragain, however, does not differentiate the student population, prompting the question of whether this information was even available for her use. I found myself wanting to know more about the demographics of Harvard’s VES classes during this period and if the student body actually conformed to my underlying assumptions of the time. While Ragain is focused primarily on the background and motivations of those who developed these pedagogical approaches, the story feels slightly incomplete without a sense of how this work lived on in the world.

This small consideration aside, Domesticating the Invisible is a substantial contribution to the scholarship of 1960s and 1970s environmental art in the United States and prompts many intriguing avenues for future research. Ragain’s study invites the reader to consider an alternative to the formalist/systems dichotomy that so much of the scholarship around this period takes as given. In doing so, her approach demonstrates how the scientific description of nature that pervaded much of the environmental work of the period became fully embedded within the field. As a result, Domesticating the Invisible prompts a reconsideration of the formal properties of contemporary eco art and gives a fuller understanding of the rich overlap between scientific analysis and visual descriptions of the environment.

Cite this article: Ila Nicole Sheren, review of Domesticating the Invisible: Form and Environmental Anxiety in Postwar America, by Melissa Ragain, Panorama: Journal of the Association of Historians of American Art 7, no. 2 (Fall 2021), https://doi.org/10.24926/24716839.12866.

About the Author(s): Ila Nicole Sheren is Associate Professor in the Department of Art History and Archaeology at Washington University in St. Louis