The cruel losses of recent months have made a little more immediate, a little less academic, the pain that Isabel and Frederic Church must have felt during another earlier time of excessive national and personal suffering in the United States. In just over one week in March 1865, with only the last gasps left of a war that killed a number of Americans still only rivaled by the Spanish Flu and COVID-19, the Churches lost both their children to another outbreak of disease. When diphtheria claimed Herbert (age two years, five months) and Emma (just five months old) the hopeful, intimate canvases their father had made upon each birth forever took on a darker new association (fig. 1). 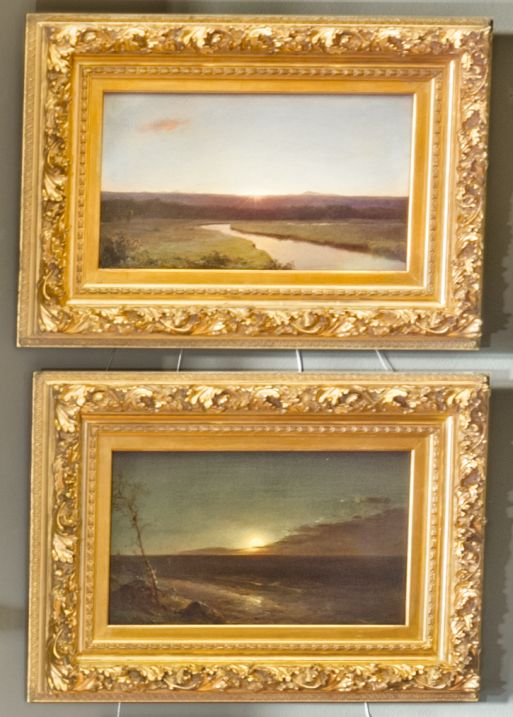 That Sunrise (1862) and Moonrise (1865) are still hanging in the astonishingly intact surroundings of Isabel’s sitting room at the Church family estate, Olana, and still speak of past and present loss to twenty-first-century viewers, is the result of a remarkable preservation history that is worth celebrating.1 It is a tale that warms the cockles of an Americanist’s heart when it is told, and we tell it often. There is even a readymade hero (Professor David Huntington of Smith College) and a villain (Parke-Bernet Galleries.) So the story goes, a sharp young art historian took an interest in a landscape painter, then out of fashion, and recognized that the said unfashionable artist had made a monumental work of transdisciplinary landscape art in the form of a highly original country estate still inhabited by the artist’s descendants and their considerable staff. When the last family resident died in 1964, the whole property was slated for a rapid sale to minimize carrying costs and create a smooth division of the estate. So close a call was it that the art collection was already tagged for dispersal by Parke-Bernet. Huntington sprang into action, securing a short window of time in which he rallied influential friends, formed the organization that is now The Olana Partnership to raise funds and cover the significant ongoing expenses of keeping up the property in the interim, and built a public outcry. After a crucial assist from an article in Life magazine that began with a two-page spread bearing the graphic “Must this mansion be destroyed?” small and large donations rolled in from around the country.2 When Huntington and his allies finally had much of the agreed purchase price in hand, they convinced Governor Nelson Rockefeller to provide the necessary long-term operating support, keeping the collection intact and transforming this family home that was seemingly fixed in amber from the nineteenth century into a New York State Historic Site.

Olana opened to the public for the first time on July 3, 1967. Its 250 acres—comprehensively transformed by Frederic Church through massive and costly labors of earth moving, planting, building numerous structures, and the construction of more than five miles of winding carriage roads expressly for the purpose of revealing and framing desired views within and beyond the property—have remained open ever since, managed jointly by the The Olana Partnership and the New York State Office of Parks, Recreation and Historic Preservation. Not even the pandemic closed the gates, and 142,000 visitors to the property in 2020, including increases of 150 percent over 2019 numbers in some months, showed us just how essential a resource this space has been for our public.

While fewer than usual of these masked visitors were able to enter the house museum at the heart of the property due to capacity restrictions, more encountered the global art collection inside its walls through a suite of powerful new virtual touring technologies, courtesy of a generous grant from the Art Bridges Foundation, that brought high-resolution, user-navigable imagery throughout the house interiors and the wider landscape and have allowed us to continue hosting, and thinking spontaneously with, school and college groups through screens (figs. 2, 3). They have also been an essential reference to the rich main house interiors for staff working from home on a partial furlough, working to get a complex, nationally traveling exhibition rescheduled for 2021 (successfully, to my relief) and continuing to study the collection, develop future projects, and field research inquiries from off site. 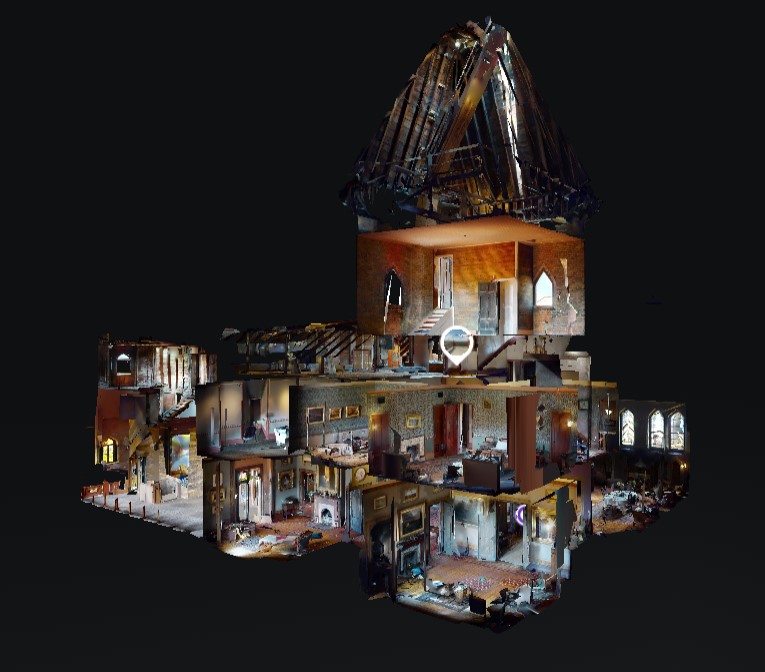 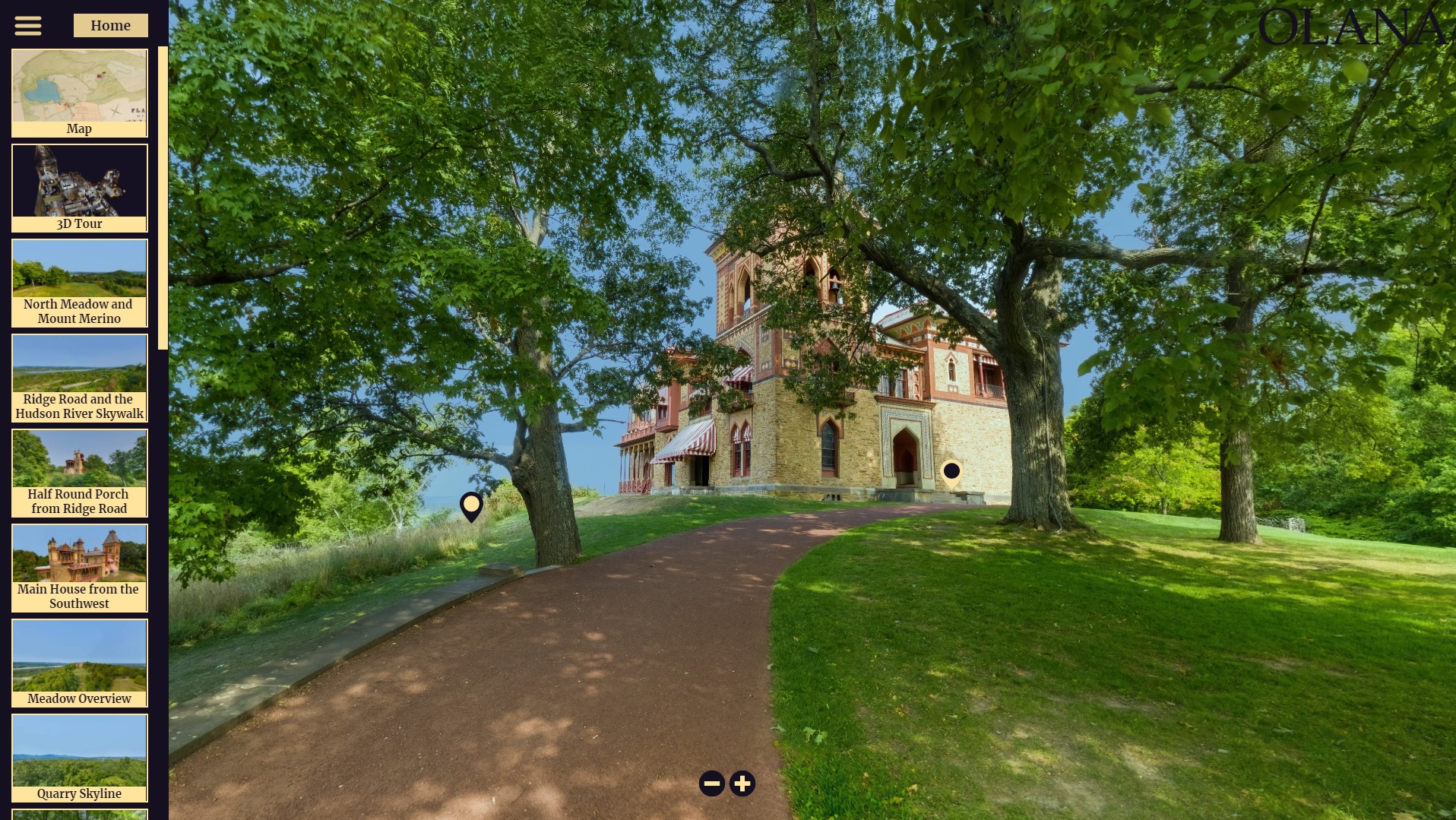 In addition, a vibrant new series of lectures and dialogues have brought global perspectives to a global permanent collection that has been a too-well-kept secret—to a broad general audience of supporters and staff initially, and to anyone in the world on our YouTube channel after the fact. With rigor, nuance, and fresh scholarship, we have confronted the cultural appropriation that is unavoidable in the making of a house Church called “Persian in style, adapted to the climate and requirements of modern life.”3 We have raised up the stories of other artists of Church’s period and shifted the spotlight from the paintings that are our best-known collection area onto Palestinian textiles, Persian ceramics, and Indian woodwork, among others. These intellectual efforts are just one plank of an incomplete and ongoing process of self-study of our legacy, and the duties that come with it.

The extreme example of cultural preservation that Olana presents is an exception that proves the rule: that the act of preservation itself is not neutral or reliable, but is instead the selection by the powerful of certain creative products as deserving of a fierce battle against time and entropy, while other material culture does not get the benefit of the same fervor. The privilege of preservation we enjoy has layers. An artist of astonishing financial success was able to build a fortune so robust that it kept his family in comfort for more than half a century after his own death and nearly the full century it took for tastes to turn in favor of his practice in two- and three-dimensional landscape alike. The privilege of this place extended to the careful family preservation of the collections and archives, numbering more than 90,000 records that amply document the tastes, travels, and relationships of the Church family, without preserving similar records for the untold hundreds of workers who shaped the place in Church’s image and kept it going until 1964. Even since its opening to the public as the property of the people of New York, this temple to the imperial gaze, high on a hill over the Hudson, has not felt equally accessible to all audiences.

The past year has been a chance for a reset that will hopefully be permanent. We have made first steps toward a new mission of providing a platform to many of the creative voices of our period and region that did not have the privilege to make and keep their own Olana, using our case study of a preserved world view as a lens through which to understand others. With boots on the ground and smiling eyes behind masks, we have worked hard to ensure that the countless visitors from our own region who have made their way to our hilltop for the first time in search of respite feel welcome and keep coming back. I am inspired by the potential of Olana to become more widely known, not only as an important case study in the history of global landscape art but also as an intangible space where people gather to engage the ties that bind the creative world of the nineteenth century to the present, and to gain valuable perspective on the challenges of our time in the process.

About the Author(s): William L. Coleman is Director of Collections and Exhibitions at The Olana Partnership