What are museums for? Museums are for teaching. The front of the building that houses El Museo del Barrio features an artwork by the conceptual artist Luis Camnitzer that simply states: “A museum is a school: the artist learns to communicate, the public learns to make connections.” Though the artist has recreated this ongoing work for several other institutions around the world, including the Guggenheim Museum in New York, it was placed first at El Museo del Barrio in 2010. 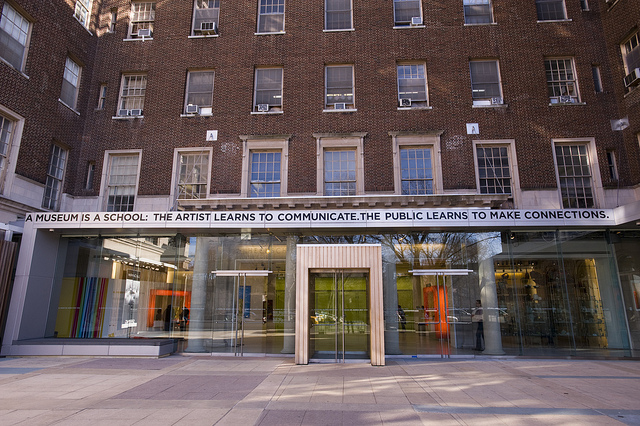 In its essence, this statement underscores the significance of the founding of our museum and its continued focus on research into relevant areas of inquiry. A powerful case in point is the creation of an exhibition and timeline of performance and radical actions made by artists throughout the Americas by former curator Deborah Cullen. This important project, Arte≠Vida, tied together nearly all the hemisphere, from North America to the Southern Cone. It explored works by both established and lesser-known artists, and perhaps most significantly, linked the actions of various groups working in different times and places. Through this exploration, for example, Chicano performance is tied to other similar gestures of protest art elsewhere in the Americas.

To create an appreciation for the importance of Latinx art and its history as part of the larger history of American art, El Museo constantly works towards creating these connections between the larger history of American art and Latinx artists living and working in this country, which is also their country. Through art, museums expand the boundaries and definitions of art and its histories.

Museums are for activating. Museums are safe spaces, spaces of thinking and feeling. In our case, it is a space where representation that is not visible elsewhere is present. Founded by avant-garde artist Raphael Montanez Ortiz in 1969, and supported in its infancy by a deeply committed community, El Museo del Barrio represents desire for opportunity, relevancy, beauty, ideas, a place in which to locate the fluid, intersectional self. One of our projects, The People’s Wall asks visitors to share their feelings about the current political climate. It invites discourse, the sharing of insight, encourages both independent and shared thinking, and taps into the collective unconscious.

Museums are for artists. Since the summer of 2015, El Museo has been host to artists with a residency program that invites artists to work in their studio, one of the museum galleries, during public hours. This residency makes possible a unique relationship between the experience of the visitor and the historically private act of an artist’s creative process. The importance of the public presence and participation has been underscored in all of the residencies, but particularly with artists Alicia Grullón and Jessica Lagunas. With her project, Outside the Gates of Culture, Grullón invited visitors to become protagonists in her photographs that explored race, culture, and current events. Lagunas asked the public to leave strands of their hair for her so that she might combine them into a single weaving created over the three months of her residency. These socially-engaged gestures continue to build on Luis Camnitzer’s assertion that, indeed, a museum is a school.

About the Author(s): Rocío Aranda-Alvarado is the Curator of El Museo del Barrio, New York City.