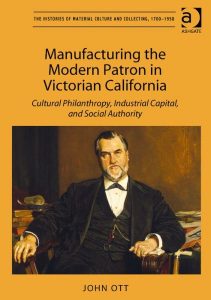 Since the 1980s, many historians of American art have turned their attention away from individual artists and towards what sociologist Howard Becker has termed “Art Worlds”: the collective activities of artists, patrons and critics—among others—that affect the production and consumption of works of art. By further elucidating what Becker described as “the complexity of the cooperative networks through which art happens,” John Ott’s Manufacturing the Modern Patron in Victorian California makes an important contribution to the study of Victorian art and patronage.1 Ott orients his narrative towards nineteenth-century patrons and collectors and away from the more traditional perspective of art producers. In particular, he centers his account on the patronage and collecting patterns of the “Big Five” executives of the Central Pacific Railroad (CPRR), one of the period’s most visible and fraught symbols of industrial capitalism. Rather than dismiss elite art consumption as indiscriminate, compensatory, or passive, Ott argues that these industrialists articulated and consolidated class identity and asserted social authority through art patronage. In doing so, they actively shaped Gilded Age art and its meanings.

In section one, “Towards a Topography of Art Patronage and Class Identity,” Ott tracks changes in art consumption and display, as well as rhetoric manufactured by and about elite patrons, over the tumultuous decade of the 1870s. As Ott contends, the CPRR executives supported public culture and art institutions to prove their civic benevolence and to compensate for ever-increasing disparities of wealth. Art, they claimed, assuaged social ills through the edification and moral elevation of industrial workers and the promotion of a unified public culture. For critics who blamed these corporate elites for the economic downturn of the “terrible seventies,” art collecting was yet another example of the acquisitiveness and self-interest that motivated larger processes of industrial capitalism.

During this period, the signification and function of art patronage also changed: what had once been a demonstration of disinterested philanthropy soon became a marker of social status.

Spaces for art consumption in antebellum San Francisco accommodated a wide range of social classes. In this relatively democratic cultural climate, art patrons “reconfigured a private act of shopping into an expression of public virtue” by supporting local artists in non-commercial settings and underwriting cultural institutions (62). However, the critical backlash of the 1870s, as well as the concurrent emergence of both a national art market and what Ott describes as a nationwide “imagined community” of elite art collectors soon made this rhetoric of conspicuously altruistic consumption not only untenable, but also socially unprofitable. As art collecting became a sign of class affiliation, California art patrons—like their counterparts in New York and Boston—began buying European academic paintings rather than Californian art and exhibiting these works in “publicly private” spaces, such as art exhibitions with a more tony clientele and domestic galleries. Ott traces this gradual shift from public to private display through a series of venues, from Woodward’s Gardens, where working-class visitors could see paintings by Albert Bierstadt, natural history exhibitions, and circus animals all in one visit, to private exhibition spaces in genteel Nob Hill residences, which were only accessible to fellow elites. Ott persuasively demonstrates that as artworks owned by industrialists disappeared from public view they became more visible in the local print culture. For Ott, the increasing prevalence of collection catalogues and newspaper reports of new acquisitions from this period implies that, in amassing their collections, the executives-cum-art collectors sought recognition and social elevation, but not public education.

Ott shifts his focus from painting to photography in the book’s second section, “Industrialism, Science and Managerial Over-Sight,” and takes as his first subject Eadweard Muybridge’s photographic motion studies, which were executed at the behest of CPRR executive Leland Stanford in the early 1870s. Captured with a complex system of high-speed, electrical cameras, Muybridge’s photographs picture phases of motion invisible to the naked eye. Ott shows that Stanford positioned these “automatic electro-photographs” as a new method of scientific research and a contribution to the common good. Moreover, he argues that the motion studies embodied and epitomized the superhuman gaze of the industrial manager. While Stanford anticipated that Muybridge’s photographs would be used to train and even perfect human vision, critics—and, in particular, artists—contested the hegemony of this new optics and instead defended the visual authority of painting. Ott, one of the only scholars to take seriously the conflicting critical reactions to Muybridge’s photographs, makes a convincing case that this debate reflected larger cultural anxieties about the increasing omnipresence of mechanization and “the ability to lay claim to social authority through the very practice of representation” (90).

Ott continues this discussion of power and photographic representation in the section’s second chapter, which investigates the intersection of scientific theory, industrial ideology, and landscape aesthetics. After the Civil War, geologists posited that slow-moving processes such as erosion had formed the physical features of the environment. Ott explains that Muybridge and Carleton Watkins helped to substantiate and disseminate Uniformitarian theory through panoramic and figureless photographs that made legible the mechanics of glaciation. At the same time, California landscape painters responded to their patrons’ demands for works that incorporated the latest scientific ideas by creating views that were both panoptic in scope and precisely detailed. Ott’s formulation of a “geological sublime” is a welcome supplement to the existing literature on nineteenth-century landscape photography and painting. More compelling, however, is his discussion of how local California elites naturalized the rise of industrial capitalism by transmuting the geological sublime into a “managerial sublime.” He argues that landscapes painted by Bierstadt and Thomas Hill for members of the “Big Five” constituted the natural world as a legible system of dynamic forces not far different from the coast-to-coast networks of labor and capital that their patrons controlled. Finally, Ott makes the case that the industrialists’ mansions on Nob Hill, as well as panoramic photographs taken from these sites, recapitulated and reinforced this managerial gaze.

In the final section, “Industrialism and the Manufacture of Regional History,” Ott analyzes the processes through which elites transformed periods from California’s past into usable historical precedents. He first explores the strategic use of gold rush mythology in a chapter centered on Charles Nahl’s Sunday Morning in the Mines, which was commissioned by retired CPRR executive Edwin Bryant Crocker. There is no extant documentation of this commission or about the painting’s creation. In lieu of textual evidence, Ott looks to a wide range of contemporary prints and paintings—from depictions of mining camps to prints produced by and about the 1856 Vigilance Committee—to account both for Crocker’s investment in gold rush imagery and the work’s narrative and formal structures. As Ott details, California industrialists often aligned themselves with the Forty-Niners to validate their fortunes and social ascendency. He thus maintains that Sunday Morning in the Mines mythologizes a pre-industrial “mining pastoral” in which economic success is attributable to self-discipline, manhood, and moral character. Furthermore, the mythical fraternity celebrated in Nahl’s painting was, crucially, coded white. By examining Sunday Morning in the Mines alongside its companion piece, the Mexican-era genre scene The Fandango, and representations of Chinese laborers, Ott explains how, in extolling Anglo-masculinity and the entrepreneurial spirit of the Argonauts, Nahl’s painting also effectively distanced its patron from problematic associations with immigrant labor.

Ott next considers the relationship between Jane Lathrop Stanford’s educational philanthropy and her appropriation of California’s Spanish history. While Stanford’s involvement in the kindergarten movement could be comfortably accommodated to the feminine sphere, her more public acts of philanthropy, such as art patronage and large-scale building projects, threatened to overstep nineteenth-century gender boundaries. Ott contends that, to navigate Victorian gender conventions and authorize her own philanthropic endeavors, Stanford affiliated herself with the California Franciscans by funding the restoration of Missions, erecting a commemorative memorial to the Franciscan Fathers, and collecting and displaying paintings that depicted the Missions. But Stanford also conceived of the kindergarten movement as a “preventive charity,” an early intervention to combat and control the social ills elites associated with immigrants. Founding Stanford University was a continuation of this imperative. Thus, Stanford also closely associated her philanthropy with the “civilizing” efforts of the Missionaries.

Historians of nineteenth-century American art and visual culture will find much to admire in Manufacturing the Modern Patron in Victorian California. Especially commendable is Ott’s methodological commitment to writing a consumer-centric history. Yet, although art patrons play the lead role in every chapter, artists never disappear from the story. Rather, patron-producer relationships emerge as a complex series of negotiations. As elites defined, asserted, and legitimized their social authority and class identity through art patronage, artists attempted to reconcile often incompatible drives: pleasing their patrons, asserting their own artistic autonomy, and making a living. Furthermore, this shift in narrative point of view from art producers to art consumers forces considerations of social class and race to the foreground. In this regard, Ott’s analysis of Nahl’s paintings within the rich visual field of prints, lettersheets, and newspaper illustrations is particularly compelling. His nuanced reading reveals how “various social groups hued whiteness in subtly but significantly different shades” and, in particular, how elites both manufactured and exploited period conceptions of Anglo-Saxon masculinity (181).

Yet, in his desire to take patrons seriously as active contributors, Ott occasionally overstates his case. For instance, he describes Sunday Morning in the Mines as Nahl and Crocker’s “collaborative interpretation of mining camp life” and states that Nahl and Crocker mutually decided to give one of the painting’s figures an unusual physiognomy (183). In what is otherwise a convincing reading of Nahl’s work, these assertions seem not only unwarranted—there is no evidence that Crocker was involved in the painting’s conception or execution—but also unnecessary. As Ott discusses, Nahl himself was a member of the Vigilance Committee, the bourgeois group formed to dismantle California’s dominant and immigrant-based Democratic Party machine, and even designed its membership certificate. That Nahl shared the conservative politics of his elite patrons surely made him not only the CPRR executive’s go-to artist, but also a canny interpreter and translator of Crockers’ personal agenda, with or without his explicit directive.

This objection, however, is largely inconsequential in the face of Ott’s substantial achievement. His work sheds light on under-studied artists such as Nahl and adds new dimensions to our understanding of well-known artists like Bierstadt. Ott’s incisive reading of Muybridge’s varied body of work is particularly revealing. Appearing and reappearing throughout the book, Muybridge’s motion studies, Sierra landscapes, and urban panoramas vividly demonstrate how, through collaboration or coercion, industrialists influenced artistic production and shaped the cultural meanings of works of art. Ott’s book is not only an impressive study of art patronage and social class in Gilded Age California, but also a model for historians seeking to explore other “Art Worlds,” as Becker defined them, in the Nineteenth Century, the United States, and beyond.

About the Author(s): Emily Handlin is a doctoral candidate in the History of Art and Architecture at Brown University