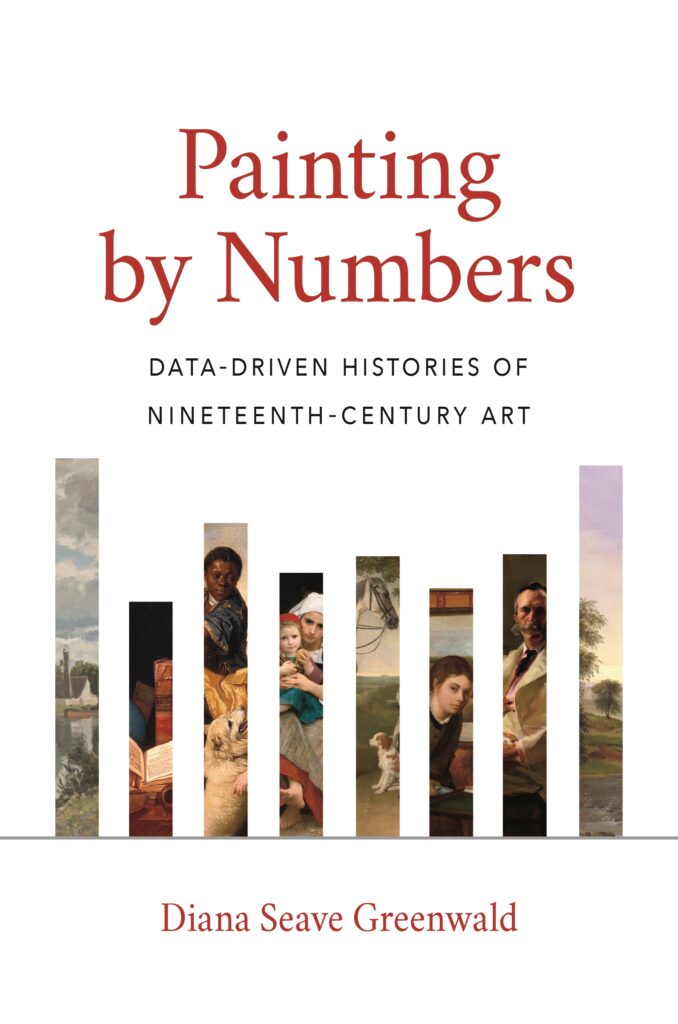 Why use the term “data-driven history of art”? From the outset, Diana Seave Greenwald answers the question clearly, thoughtfully, and authoritatively: a data-driven history of art combines the approaches of art history with economic methods, the two areas in which the author has been trained (4).1 Greenwald chooses not to place her work under the general umbrella of digital humanities, which she considers not yet fully defined as a discipline. Her explanatory and accessible writing style is welcome throughout Painting by Numbers: Data-Driven Histories of Nineteenth-Century Art, which will be of great benefit to art historians unpracticed in economic theory.

The goal of the book is lofty, especially for a first monograph that derives from a doctoral dissertation, which the author completed at Oxford University. It sets forth a new methodological approach combining the tenets of art history and economic history, with the former characterized by focused analyses of works of art, and the latter by a macroscopic view of people, events, and shifts in behaviors represented by points of data (2). Greenwald considers these approaches complementary, and she shows that together they form a tool that can open up new perspectives on works of art and, importantly, correct for sample biases that prevented objective analyses in previous studies of art movements.

The period under consideration is the nineteenth century, and the geographic locations are France, the United States, and England, chosen for their rich sets of available secondary data, specifically scrupulously catalogued compilations of exhibition histories. The main sources analyzed here are the Whiteley Index to Salon Painting, the Historical American Art exhibition database, and the Royal Academy exhibition database. But Painting by Numbers is not a dry tome filled with impenetrable data charts. Rather, the fourteen color-coded tables throughout the main text and the five in the appendices are presented in harmony with well-crafted text. To the credit of Princeton University Press, color reproductions of paintings (Jean-François Millet, J. M. W. Turner, Edgar Degas, Lilly Martin Spencer) are generously placed throughout the book.

The volume is organized into six chapters and seven appendices, with extensive notes, followed by a bibliography and index. The introduction and chapters retain literature reviews that undoubtedly derive from the book’s origin as a dissertation. Advanced students of art history, who would do well to have this publication by their side as they consider their own theses, will appreciate Greenwald’s thoroughness. The summarizations of methodologies in context, like social art history, are especially lucid (17–18). The same clarity is provided in definitions of economical concepts, like sample bias, scarcity, and econometrics (“the statistical testing of hypotheses”).

Importantly, the author does not apply these concepts in order to disprove or diminish previous work by other art historians but rather to enhance them and raise further lines of inquiry. There are, however, clear findings that make us reconsider some conclusions that are nearly universally accepted in the field. Chapter 3, “Between City and Country: Industrialization and Images of Nature at the Paris Salon,” provides an example. Greenwald points out that in analyses of French paintings of the mid-nineteenth century, in particular by Jean-François Millet, Gustave Courbet, and Camille Pissarro, art historians Linda Nochlin, Griselda Pollock, T. J. Clark, and others have proposed that imagery of rural life increased significantly as a nostalgic response to counteract the urbanization of France during the Second Empire (53–54). However, Greenwald’s quantitative analysis of the Whiteley Index of exhibition data (with its meticulous keyword tagging systems) concludes that rural genre paintings shown at the Paris Salon never surpassed 4 percent per year (55). Further, counter to previous scholarly propositions, painted scenes of rural workers did not increase as rural life decreased, suggesting that urbanization and labor strikes did not trigger artists to turn increasingly to bucolic subject matter (75). In fact, Greenwald writes: “There is no correlation between urbanization rates and the frequency of rural genre painting” (68). Instead, reasons such as the location and collegiality of artist colonies and a reduction in the cost of travel from Paris to the village of Barbizon, for example, led to an affinity for depicting the countryside (75).

So, is this a smoking gun that discredits the work of Nochlin and her esteemed peers? Not exactly, says Greenwald, and here is where she demonstrates the importance of retaining qualitative analysis alongside the quantitative. Using the example of Millet’s The Gleaners (1857; Musée d’Orsay, Paris), she shows the importance of reading the artist’s letters to absorb, in his own words, how he regarded both the professional art world in Paris and his time in Normandy. He mentions painting supplies and sales prospects more frequently than the oft-quoted joy of the “calm and silence” of the forest (80). As city centers were modernizing, Millet was balancing both rural life and industry, as was Pissarro, represented in the book by The River Oise near Pointoise (1873; Clark Art Institute, Williamstown, Massachusetts). So art historians may well be guilty of romanticizing French artists’ propensity for escaping city life, but thanks to the tools provided by Greenwald’s method, we now recognize how such studies expressed sample bias. A term used by social scientists, sample bias “emerges when the group of people, objects, or other entities that a scholar analyzes is both limited and misrepresentative of the entire population that the scholar is interested in studying” (5). The attitudes assigned to nineteenth-century artists are, apparently, the attitudes of twentieth-century scholars impelling them to select only objects that “proved” their biases.

In an equally engaging case study in chapter 4, “Why Have There Been No Great Women Artists? Artistic Labor and Time-Constraint in Nineteenth-Century America,” Greenwald applies quantitative methods from labor economics to determine the cultural and social reasons why nineteenth-century women artists are represented in lower numbers in museums than male artists. Greenwald argues that time constraints due to the volume of hours spent on housework and child-rearing led women artists, like Lilly Martin Spencer, to produce genre scenes and still lifes, small-scale works that required fewer hours to produce, were portable, and were easier to manage but, in turn, were considered less prestigious in the exhibition (National Academy of Design) and sales market. She charts Spencer’s output by type and decade, positing that the artist was most productive in the earlier years when she had four surviving children, as opposed to later, when she had to care for seven children. Materials like pastels and watercolors are also displayed with less frequency in museums, in large part due to light considerations (113). As the author states succinctly, “Time has long been—and will likely continue to be—a scarce resource for women artists” (114).

Chapter 5, “Implied But Not Shown: Empire at the Royal Academy,” walks the reader through a surprise finding that contradicts the author’s own initial hypothesis prior to analysis. Contrary to her prediction, Greenwald’s study of annual exhibitions at the Royal Academy in London proves that depictions of the British Empire were seldom shown: “In a dataset of over 184,000 works, the Empire rarely appears” (116). Greenwald clarifies that she defines countries “in empire . . . even if the painting was made before or after a country was colonized by the British” (116). She considered the genres of “landscapes, history paintings, portraits, and still lifes . . . if they included the name of a geographically identified site” (116). Looking closely at the media in which images of empire were shown, the author most often finds the subject in works on paper and decorative works for domestic interiors. Since imperial lands did not appear in paintings and sculpture, they are not accounted for in the Royal Academy exhibition database (151–52). Greenwald concludes: “These policies and the places from which labor and resources were forcibly removed did not need to be celebrated or reaffirmed in painting and sculpture” (151). Rather, the more ephemeral depictions were the ones that mirrored the “extractive instability of imperial institutions abroad” (151).

In sum, Greenwald demonstrates a method of pairing quantitative data sets with art-historical qualitative analyses of works of art to inform and broaden understanding of larger movements in a given period. But, as she admits, properly doing so depends on the quality of the data sources that are available, which requires a trained eye to identify the strengths and lacunae of those sources. To maximize results, an individual art historian without Greenwald’s specialized training would need to collaborate with a colleague in economic history, limiting the viability of placing the methodology into frequent practice in the field.

Cite this article: Elizabeth L. Block, review of Painting by Numbers: Data-Driven Histories of Nineteenth-Century Art by Diana Seave Greenwald, Panorama: Journal of the Association of Historians of American Art 8, no. 1 (Spring 2022),https://doi.org/10.24926/24716839.13329.

About the Author(s): Elizabeth L. Block is Senior Editor at The Metropolitan Museum of Art, New York.