I love playing the beautiful woman, knowing that I am steeped in painting history: Ingres’ The ‘grande odalisque’, Manet’s Olympia, and the Egyptian goddess Cleopatra before that. It is an extremely thought-provoking position to be in. I ask the question. Why am I here posing like this, and what would HE think if I took out my glasses and started to read a first edition of Tolstoy’s War and Peace or Richard Wright’s Black Boy?

In language written in the margins of Faith Ringgold’s (b. 1930) Matisse’s Model (fig. 1), Willa Marie Simone, a fictional expatriate African American woman and the artist’s alter ego, ponders her place in the history of Western arts and letters and ruminates on her beauty and power as a black woman, all the while modeling nude for the modernist luminary Henri Matisse. Through word and image, Simone relishes her place in a lineage of famous women in the history of art, and at the same time she questions her precarious presence in this contested, overdetermined mythical space. Consider the model’s dark, rigid body reclining underneath Matisse’s Dance (1909–10; The State Hermitage Museum, St. Petersburg); at first glance, she plays the impassive foil for the idyllic modernist dancers whose expressive, attenuated movements recall classical reverie and bacchanalian verve. Yet, in their time, Matisse’s dancers were considered by critics to be brutal, their dance violent, and their garishly red bodies primitive. For his original viewers, Matisse’s unsettling atavistic figures unmasked the fissure between modern art and the classical tradition, causing a sense of anxiety about the direction that contemporary art was taking in the early twentieth century.1 Eighty-one years later, Simone’s body, in a posture that draws upon Manet’s Olympia (1863; Musée d’Orsay, Paris), throws the tints of race and primitivism that unnerved its original audiences, and perhaps inflected its conception, into high relief. It is the menace of the primitive that stoked the unease of Matisse’s critics. With a clear understanding of how blackness informed primitivism in modernist art, Simone takes ownership of that vexed history with Olympia-esque frankness and unapologetic visibility. She came to play.

Willa Marie Simone is the protagonist in Ringgold’s narrative painting series The French Collection (1990­–97), which consists of twelve works painted on fabric that she refers to as “story quilts.” Through riffs on iconic paintings, Ringgold chronicles Simone’s experiences as an artist and model who navigates modernist circles in 1920s Paris. Throughout the series, Ringgold tells a feminist-inflected “magic realist” tale of a black woman who visits Monet’s Giverny and also participates in a sunflower-adorned quilting bee with the likes of Sojourner Truth, Rosa Parks, and Vincent Van Gogh.2 With access to the hallowed spaces of modernist art making, Simone models for both Matisse and Picasso, paints Josephine Baker, and dines with Gertrude Stein. Willa Marie Simone and her entourage are front and center, driving the narrative as Ringgold riffs and reveres the European canon from Leonardo da Vinci’s Mona Lisa (1503; Musée du Louvre) to Matisse’s The Dessert: Harmony in Red (1908; The State Hermitage Museum, St. Petersburg). Ringgold’s unfettered intervention into European art comes to us through Simone’s contested and sometimes conflicting identities. Simone and her cadre of black literati companions from across time and space are what Anna C. Chave might call “unanticipated viewers” of the inner workings of European art, with “unauthorized perspectives” on European art.3 Unsanctioned voices like Ringgold’s are not just iconoclasts; they reveal the mashup of symbiotic relations, divergent responses, and vexed entanglements that characterize the dance between African American art and European culture.4

My main reference are the great masters of portraiture, including anyone from Thomas Gainsborough, Joshua Reynolds, Jean-Auguste-Dominique Ingres to Antoine van Dyck [sic]. My abiding desire has to do with man’s desire to see himself principally in the field . . . Principally because we love looking at ourselves, when we stare at these portraits, sure, we see other people in states of grace, but we also see ourselves imagined. There is implied in this act of looking a type of exchange, a recognition that if someone else can be seen in such a state of esteem, it presupposes a state for our own. 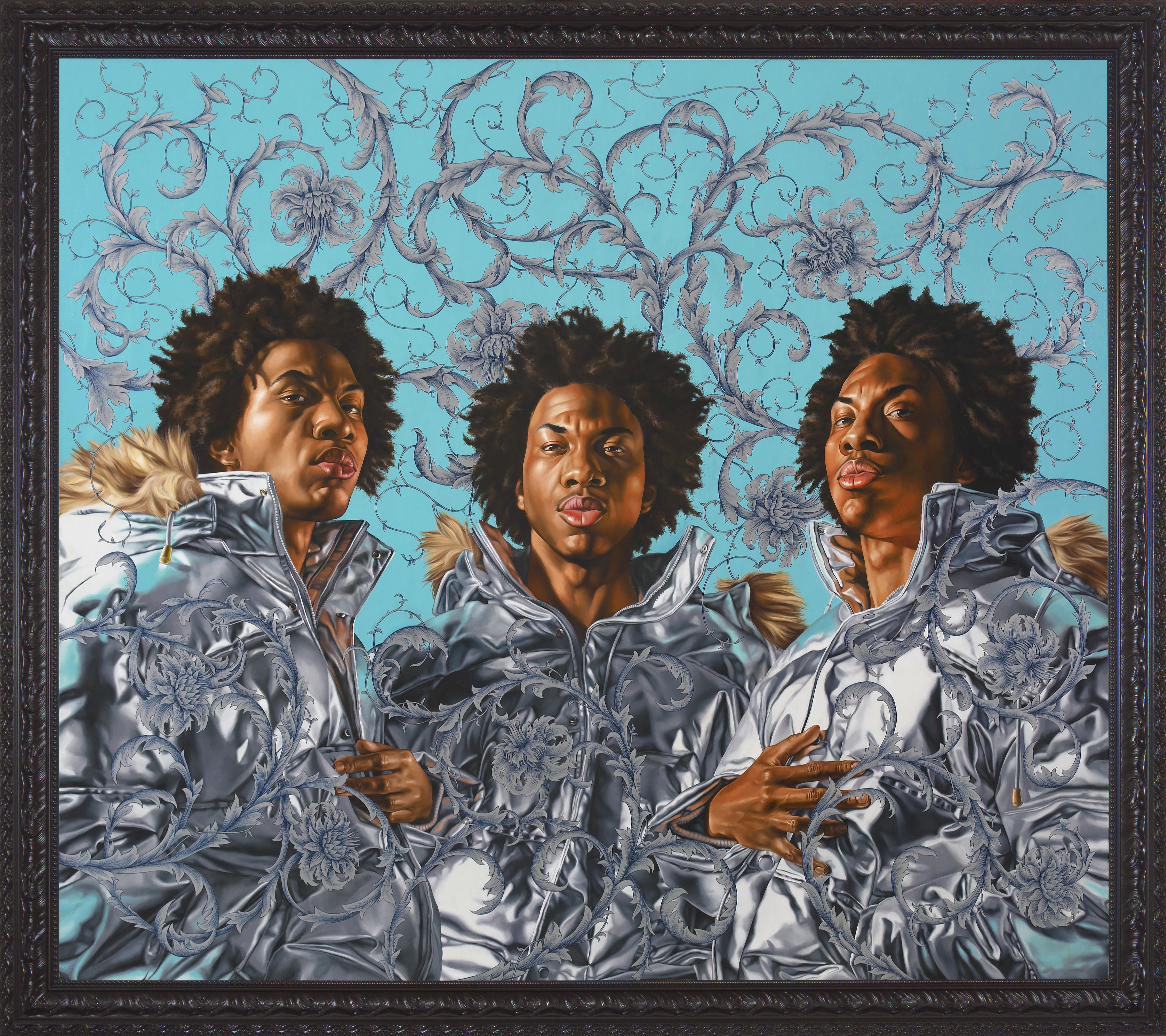 The prominence of contemporary artists, such as Kehinde Wiley (b. 1977; fig. 2), Kerry James Marshall, Titus Kaphar, and Mickalene Thomas, who explore issues of race, history, politics, and beauty by engaging the master narratives of art history writ large affirm the importance of this persistent concern among African American artists. The postmodern exposure of the discriminatory practices of the hegemonic Western canon has inspired what Derek Conrad Murray characterizes as “an entire genre of artistic production that could be read as corrective—as a politics of the periphery that sets out to redress the historical debasement of marginalized bodies in the field of representation.”6 Yet this relationship represents a varied and sustained practice in the art of African Americans throughout the twentieth and into the twenty-first century.

In the early twentieth century, when African Americans entered the professional art world and consciously claimed the power to represent and define themselves, their history, and their blackness, European art (although in many ways the language of exclusion) was an important yet complex influence. Philosopher Alain Locke’s view that New Negro artists should look to both African art and European modernists is evidence that although Euro-American culture created a system of hierarchies and racial subjugation, modern European art was not seen as part of that enemy camp. Instead it was held by Locke as a guidepost for young black artists.7 European modernism was a language of resistance and rejection of authoritative tradition (inflected by African and “tribal” art), and in many cases that jibed with the formal and social aims of black American artists who also strove to reject tradition. Aaron Douglas and Jacob Lawrence worked in European modernist idioms in their search to find modes to represent the “negro” in their art. Expatriate William H. Johnson studied modernist artists Chaim Soutine, Vincent van Gogh, Paul Cézanne and others as he searched for aesthetic freedom abroad. Throughout his career, Romare Bearden appropriated canonical works of European art and transformed their power into innovative vehicles for exploring African American life. Beauford Delaney and Bob Thompson are artists who sought refuge from American discrimination in the perceived freedom of Europe and engaged European artistic traditions with visionary creativity.

In postmodern America, black artists such as Robert Colescott adopted an oppositional stance to Western canonical art history and used the imagery to question the supposed authority of European art, exposing and taunting its vexed relationship to people of color.8 Faith Ringgold and Emma Amos address the female form as a site of contention in the history of art, particularly at the hands of European modernists who used dark female bodies in primitivist modes to search for their own version of modernity, often inscribing ideas of the degeneracy, sexuality, or alterity of the black woman.9 Art historian Phoebe Wolfskill has reminded us that although artists like Amos mount a critique of the European canon, it is equally important to consider their embrace of Western art history—aspects that are not mutually exclusive, but interdependent.

Although the politics of race seems inevitably to infiltrate art by African Americans, it is by no means the defining factor and can sometimes obfuscate the depth and breadth of an artist’s concerns and create false equivalencies and shallow narratives.10 Interestingly, the work of African American artists, such as Ringgold and Wiley, who take on the European canon serve to reveal how the politics of race often informs that space in ways that have gone unacknowledged or buried.

While figuration makes visible the presence and absence of black corporeality in European art, abstraction poses equally complex relationships among African American artists who draw upon European sources. Abstraction in general has been an area fraught with the politics of race in America. Notions of abstract form as universal and lacking the connotation of race collide with the idea of “black abstraction.”11 Interjecting European sources only muddies the waters further. However, the radical innovations of form, liberated use of color, and affinity with music introduced by European modernists such as Piet Mondrian, Paul Klee, and Wassily Kandinsky have influenced some black artists such as Norman Lewis, Felrath Hines, and Moe Brooker to search for new languages with which to define their artistry on their own terms, outside of the restrictive politics of race in America.

This special section of Panorama entitled “Riff: African American Artists and the European Canon” is an outgrowth of an Association for Critical Race Art History panel of the same name that took place at the annual meeting of the College Art Association in 2017. The five essays included in this section offer nuanced readings of artists spanning nearly a century, whose engagement with European art and artistic tradition vary from full-throated adulation to subtle and unspoken resonances. James Smalls takes on Richmond Barthé’s avowed classicism, revealing it as a delicate tool to elevate black subject matter while actualizing its homoerotic potential. Jacqueline Francis considers Romare Bearden’s only known sculpture, Mauritius (1969; Private collection), and suggests that in the era of the Vietnam War, it echoes images of the Catholic St. Maurice, a black warrior saint who had a devoted following across Europe. Julie L. McGee focuses on the expatriate artist Sam Middleton, whose collage technique, borne of his interest in the early Cubist collages of Pablo Picasso, was fueled by his dedication to jazz music and the connections he cultivated between the two forms of expression. Jazz and the teachings of Wassily Kandinsky are central to the abstract compositions of Moe Brooker, as illuminated by Nikki A. Greene. Gwendolyn DuBois Shaw interprets Carrie Mae Weems’s photographic suite The Louisiana Project through the lens of the “wandering gaze” of German romantic painter Caspar David Friedrich (1774–1840), calling upon us to see the historic terrain of Louisiana through Weems’s perspective.

This select group of essays casts a wide net across media, including photography, painting, and sculpture, and they consider both abstraction and figuration. All of these artists and the scholars that interpret them use different methods to unpack the artistic concerns at the core of these relations. The multiple points of view exhibited by these African American artists toward European canonical sources reveal the porous, often ephemeral nature of the boundaries that govern exchanges across media, racial categorizations, and geographic, national, and temporal lines. Each are characterized by subtleties and individual perspectives rather than rigid binaries that shake down around perceived racial lines. Adopting the techniques, images, tropes, or narratives of canonical European art, therefore, becomes a strategy that offers sites of resistance and/or passageways toward reckoning with personal concerns about the vagaries of identity, misadventures of art history, and the complexities of belonging.

I would like to acknowledge the insightful responses and the generosity of the anonymous reviewer. All of our essays benefit from the suggestions. We are grateful to the editorial staff at Panorama for allowing us this platform to continue the ongoing discussion about this important subject.

About the Author(s): Adrienne L. Childs is an Associate at the Hutchins Center for African and African American Research, Harvard University.