“The Spanish Element in Our Nationality”: Spain and America at the World’s Fairs and Centennial Celebrations, 1876–1915 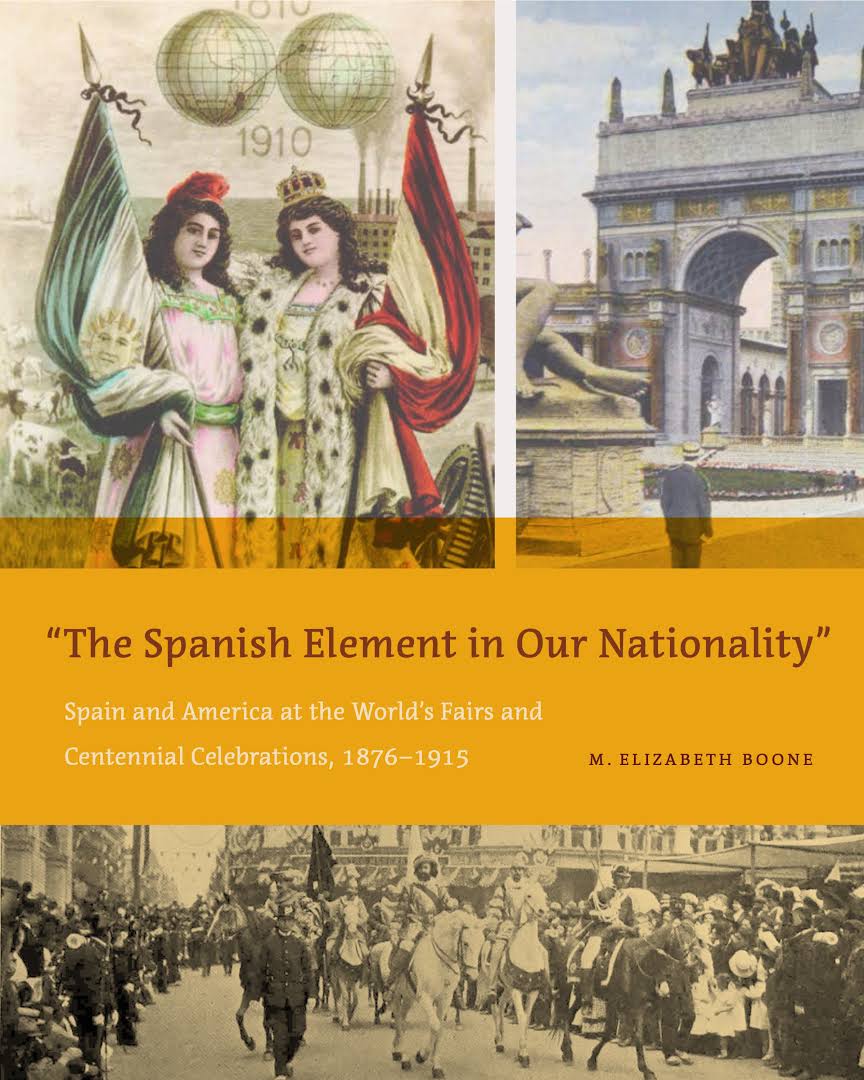 In translation studies, a false friend is a word that sounds or looks the same in two different languages but in reality has very different meanings in each one. For translators, “America” is one of those words. Translating the English term “America” to “América” in Spanish (rather than “Estados Unidos”) is a serious mistake translators try to avoid. For Spanish-speakers across the globe, America refers to the whole hemisphere from Canada in the north to Chile in the south. In “The Spanish Element in Our Nationality,” M. Elizabeth Boone sheds light on the inner workings of this false friend and offers a nuanced and timely look at notions of “Spanishness” in the United States.1

Boone’s first monograph, Vistas de España: American Views of Art and Life in Spain, 1860–1914 (2007), established her as an experienced researcher in the field of cultural production and artistic relations between the United States, Spain, and Latin America. She develops an impressive transnational framework in this second book, which is undoubtedly one of its main achievements. Boone’s transnational and interdisciplinary approach draws from Iberian, Latin American, US, and Latinx studies, as well as on literature in the fields of social history, communication and audience reception, material culture, exhibition display, public memory, and national identity, offering a methodological model for scholars working across geographic and national contexts.

In addition to examining Spain’s participation in the world’s fairs, the book charts the history, development, and events that surround each exhibition. Through meticulous archival research across several countries, Boone skillfully comments on the selection and reception of the artworks and artifacts on display. The variety of analyzed primary documents and visual sources relating to Spain’s participation at the world’s fairs includes photographs, illustrations, newspapers and periodicals, political cartoons, paintings, and exhibition layouts. The variety and scope of the visual materials are highlighted by a generous number of illustrations, which has now become standard for Penn State University Press’s admirable books on Spanish visual culture.

In five chapters, Boone looks closely at five historical moments through the study of ten world’s fairs and centennials. The first chapter, “Inventing America at the 1876 Philadelphia Centennial,” examines the reception of Spain at the exhibition and its role in the formation of a national identity in the United States. Looking at different historical materials and especially at Antonio Gisbert’s painting Landing of the Puritans in America (1863; Palace of the Senate, Spain), Boone argues that while Spain’s participation in the Philadelphia fair was somewhat inconsistent, the country did try to claim its place in the past history of the United States. Reception of Spain’s contribution, however, reinforced negative perceptions of the country and the idea that Spain had founded the “unproductive” nations to the south. The United States separated itself from its multinational past, instead leaning toward an uncomplicated, singular narrative of a “white, Protestant, English-speaking nation” that left little space for Spain (48). The following chapter, “Defining (and Defending) Spain in Barcelona and Paris, 1888 and 1889,” considers Spain’s struggle to present a unified idea of nation despite regional differences and political instability inside and outside its borders. The “Catalan vision for Spain” differed from the one broadcast by the central government in Madrid (51). In contrast to the previous chapter, the spotlight here is on the complexity of presenting a single homogenous nation when multiple identities coexisted in Spain. The third chapter, “Marginalizing Spain (and Embracing Cuba) at the 1893 Columbian Exposition,” analyzes Spanish participation at the Chicago fair at a time when Spain was struggling to maintain its control over its last colonies in the western hemisphere, Cuba and Puerto Rico. Spain was given a more prominent role in this exhibition because of the central theme, the commemoration of the four hundredth anniversary of Columbus’s voyage from Spain to the Americas. The fair displayed advances in exhibition practices and interactive environments with recreations of large-scale spaces and objects, like the Great Mosque of Córdoba and Columbus’s caravels, which were transported to Chicago from Spain. Despite a warmer reception and even the attendance of a Spanish infanta, no solid historical links were established between Spain and the United States.

The final two chapters shift focus to exhibitions in California and Latin America. Chapter 4, “Reasserting Spain in America at the 1910 Centennial Exhibitions,” analyzes the fairs celebrated in Buenos Aires, Santiago de Chile, and Mexico City on the one hundredth anniversary of their independence from colonial rule. Each city displayed a different idea of American and national identity. Spain, however, saw the centennials as opportunities to expand commercial ties and strengthen its presence in these nations. Contrary to the fairs in the United States, these Latin American cities—Buenos Aires and Santiago, in particular—moved away from the US project of Pan-American unity and instead turned to other expressions of Hispanic unity (130, 166). Celebrated just two months prior to the Mexican revolution, the centennial exhibition in Mexico City differed due to its mixed demographics composed mainly of an Indigenous and mestizo population and a Spanish creole elite. The fair made use of performance, spectacle, and pageantry to present the different layers that made up Mexican national history with a special emphasis on its pre-Columbian past. Boone argues that “just as Spain and Spanishness meant one thing to a Catalan and another to a Castilian,” these Latin American republics, with their diverse demographics, also perceived Spanishness and Americanness in different ways (152–53). Perhaps more than the others, this chapter condenses the complexity of this subject: the analysis of changing notions of Spanish, European, American, Indigenous, and mixed-race identities across nations that were still grappling with the aftermath of achieving their independence while, at the same time, the United States was seeking to increase its power and influence.

Boone’s last chapter, “Using Spain to Ignore Mexicans at the 1915 California Fairs,” studies the Panama-California Exposition in San Diego and the Panama-Pacific International Exposition, the official fair held in San Francisco commemorating the opening of the Panama Canal. At these fairs, Spain veered away from US Pan-Americanism, which was viewed as imperialistic, and instead opted for “expressions of Hispanic unity” (166). At the same time, the presence of Mexican Americans, Californios (descendants of Spanish speakers), and a growing population of Anglo Americans in California further complicated perceptions of Spanishness, Americanness, and the role played by Spain’s colonial past. This chapter also highlights the shift of power in the state from Spanish creoles to English-speaking settlers and the dominance of both over Indigenous and mestizo laborers. As Boone notes, in California, Spanishness was subject to a “double erasure,” first by the Mexican government and then by the US government following the annexation of California in 1848 (158).

“The Spanish Element in Our Nationality” fills several gaps in the literature concerning Iberian, Latin American, and US cultural studies and excels at creating connections between these geographic locations. The book sheds light on other overlooked areas, such as Spanish cultural policy at the turn of the twentieth century, nineteenth-century visual and material culture in Spain, and the Catalan visual arts. In addition, it situates the cultural production of the United States within its broader international context and sheds light on its relationship with Spain and its former colonies.

One of the main achievements of the book is its nuanced approached to various layers of shifting racial, social, regional, national, and international identities. Using the world’s fairs as case studies, this research brings into dialogue multiple populations and considers the complex historical backdrop of an array of nations at the time. From tensions between creole, mestizo, and Indigenous populations, as well as Catalan and Spanish identities, the book unearths how competing ideas of nation played out in cultural production. Among the crucial events that shaped these international exhibitions was the end of Spain’s First Republic and the restoration of the monarchy, the Mexican revolution, the Anglo migration to California, and the construction of the Panama Canal. Boone studies Spain’s grappling with, and retelling of, its imperial past in the aftermath of the Spanish-American War, as well as considering the centennial celebrations that commemorated the independence of various American nations. A broader investigation of Spain’s concern with its position within Europe would have added to the study’s transnational approach, but overall the book excels at weaving together these events and exhibitions in a thoughtful, rigorous, and sophisticated way.

The main strength of “The Spanish Element in Our Nationality” is that it achieves something rare for art-historical volumes: its conclusions go far beyond academic scholarship to help us better understand the racial, sociocultural, and linguistic landscape of the United States today. The author prompts both the specialist and general reader to better “understand, complicate, and remember” the Spanish history of the United States (12). In this way, the United States may be able to “embrace its expanding Spanish-speaking population and be the progressive, positive, and pluralistic nation it might still become” (157). Rethinking the dominant narrative of the United States as a white, Protestant, English-speaking nation and writing Spain back into its history is a daunting task, but Boone establishes a foundation for future scholars in this outstanding book.

About the Author(s): Vanesa Rodríguez-Galindo is a faculty member at Florida International University