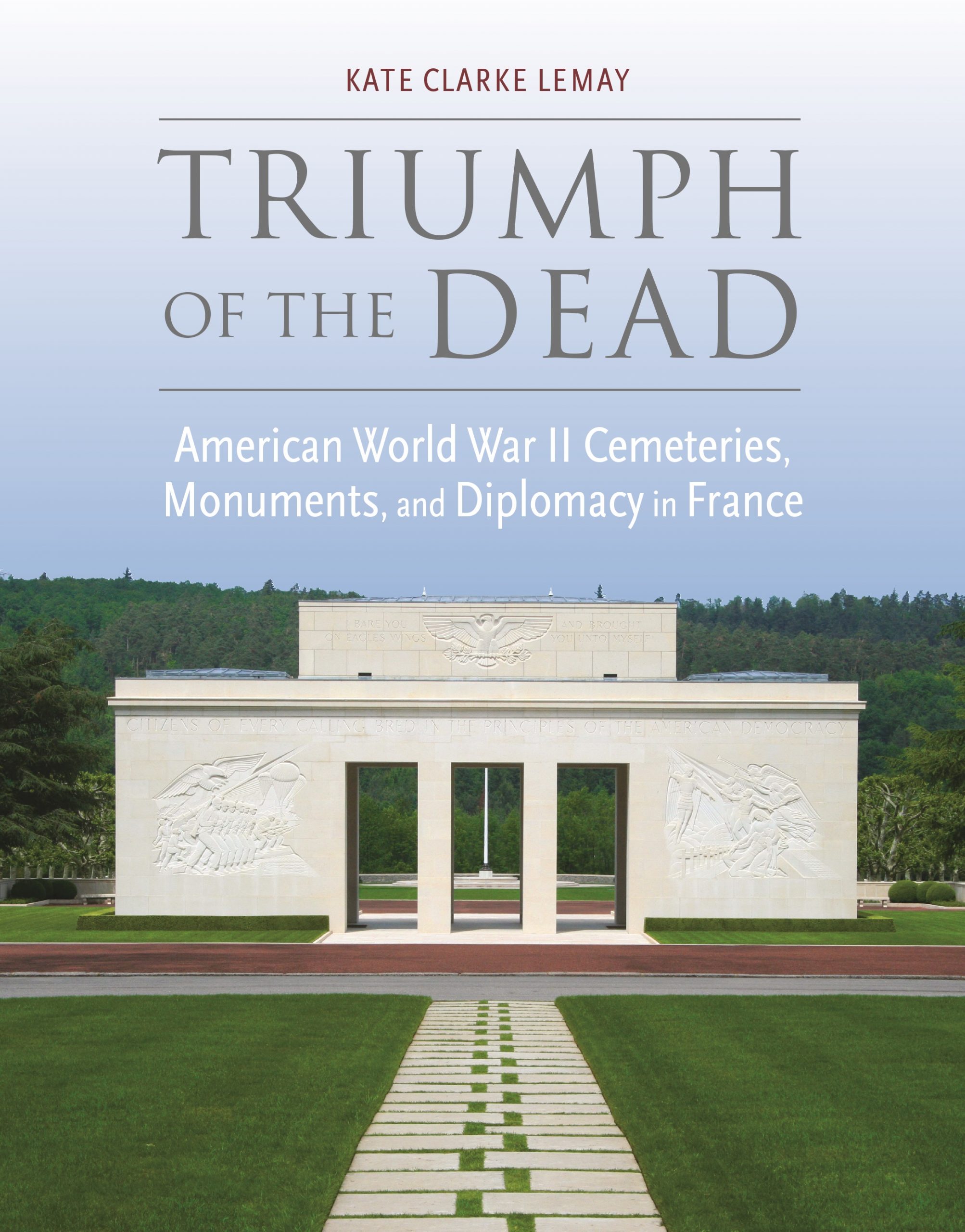 Following World War II, the United States government embarked on an enormous project to design and create fourteen permanent military cemeteries to inter the remains of 150,000 American war dead buried in temporary sites in western Europe. Built between 1948 and 1956, these cemeteries remain important sites of memory for both American and European visitors. Kate Lemay’s deeply researched new book, Triumph of the Dead: American World War II Cemeteries, Monuments, and Diplomacy in France, examines this much-neglected history, focusing on the architecture, fine art, and diplomacy implemented in five American World War II cemeteries in France. Lemay’s book, part of a series published in cooperation with The Center for the Study of War and Memory at the University of South Alabama, straddles a number of historical fields in addition to art history and adds to the growing literature on memory and monuments.1

In an unusual but highly effective way, Lemay brackets the book’s introduction and five chapters with a preface and conclusion that describe the author’s direct encounters with American World War II veterans in France. Lemay’s careful attention to the thoughts and memories of these elderly men adds a visceral dimension not frequently encountered in art history. Scholars often interpret collective memory gleaned from primary documents, but less frequently do they gather such data directly. Through her engagement with these men, Lemay provides insight into one of the primary audiences for the cemeteries—the American veterans who served in France during the war—and reminds readers of the lingering presence of the past. This framework, although anecdotal, provides distance and perspective on the historical tale told throughout the rest of the book, bringing the reader into the present with firsthand observers of the war.

Central to Lemay’s project is the way that the American cemeteries in France offer access to differing memories of the war. Using the work of cultural theorists such as Maurice Halbwachs, who emphasized the importance of collective memory in social constructions of the past, Lemay sets out to demonstrate “how American collective memory of World War II became, and remains, a dominant influence in French remembrance and French identity” (1). However, Lemay’s tale is not monolithic; she considers how memory evolved to account for the distinctly different war experiences within particular regions of France. For example, Lemay contrasts the histories of Provence and Normandy, two regions with American military cemeteries. While the French could proclaim greater agency in Provence, where the Free French Army contributed to the liberation of the French from the Nazi regime, occupied Normandy suffered doubly, first at the hands of the Germans, then followed by the devastation wrought by the Allied forces following the D-Day invasion. The liberation of Normandy lies at the heart of American understandings of World War II as a “Good War,” which sought to end Nazi oppression, but the Normans have a decidedly more complicated relationship with their American “saviors.”

Lemay is at her best when she turns her sharp attention to the complexities of the Norman war remembrance. This narrative dominates the first three chapters of the book. A strength of the first chapter, which looks at the decision made by the United States to reinter its war dead in newly created permanent overseas cemeteries, addresses the impact of this decision on the Normans, who had buried and tended the graves of these soldiers in small towns across the province. As an occupied region shattered by violence, “ignominious defeat,” and significant civilian losses, “the concept of proud commemoration was all but impossible” in Normandy (37). In Lemay’s telling, the temporary American cemeteries became “sites for Norman pilgrimage, particularly for women” (39). The loss of these graves, as American remains were transferred to the new cemeteries, left the Normans without “a means to formally acknowledge their own war sufferings” (39).

The extent of Norman trauma and its impact on both French and American war commemoration is the subject of Lemay’s compelling second chapter. For Americans accustomed to their own positive and nationalistically biased history of D-Day and the Battle of Normandy, Lemay’s discussion of the profoundly traumatic impact of the invasion on the Norman people offers a sobering corrective. This is not a revisionist second guessing of American military decisions, but a clear-eyed study of the multivalent concerns associated with war remembrance, especially when one considers who is doing the remembering.

A stunning example of this tension is revealed in Lemay’s discussion of Plot E in the Oise-Aisne American Cemetery, where American soldiers executed for war crimes are buried. In contrast to the heroic narrative told in most American overseas cemeteries, Plot E is elusive. Hidden in “an unmarked site behind the superintendent’s house at the World War I Oise-Aisne American Cemetery,” the ninety-six men buried at the site lack headstones, their graves marked by “numbers on small squares sunk into the ground” (94). Most of the men buried here were convicted of rape or civilian murder, affirming a collective traumatic memory shared by Normans of the American GI. Yet, this history is further complicated by a legacy of racism in both the United States and France that more frequently associated African Americans with these crimes. As Lemay notes, “84 percent of the overall number of rapists convicted by the American military justice system in France were black,” with whites accused of the same crimes often being “released unpunished” (95).

An exploration of the material and diplomatic concerns that shaped the design of American World War cemeteries in France dominates the second half of the book. In these chapters, Lemay addresses the ways American planners, artists, and architects crafted the American World War II cemeteries in France to reinforce a narrative of “heroic war” in which war death is seen “not as a terrible loss but rather as sacrifice” (70). The methods employed in shaping visitor experience, not just of mourning, but of the war and American valor, include the use of “threshold design”—a point of entry that guides the visitor into the cemetery landscape. These gateways, though different in design at each site, use fine art, murals, maps, and sculpture to “direct the memory of war, placing emphasis not only on American military achievement but also on a glorified death” (70). The use of a “stripped-down” modernist architectural style and symbolic references to the Christian faith help to cast the fallen American soldier as an exalted martyr offering himself up in sacrifice for the preservation of democracy.

Chapter three, in particular, offers a compelling discussion of how such design choices not only shaped visitor experience but were intended acts of diplomacy, used “to showcase American military strength and a commitment to democratic values in order to compel or otherwise convince countries like France to resist the threat of Communism” (67). Lemay points out that America’s insistence on a triumphant nationalist memory of the war did not always play well in France, especially as the French Communist Party became seen as “the party of French patriotic loyalty” due to the role it played in the resistance (66). Lemay could have more fully addressed the discordant use of a classically influenced modernism that closely resembled the work of fascist and communist architects, supposedly to promote democratic ideals. Lemay notes the relationship to the work of Albert Speer but does not take it further in terms of the stylistic connection to American diplomatic goals (123).

The second half of the book delves more deeply into art-historical concerns, as the chapters discuss the sculpture, battle maps, and murals designed for the cemeteries. While the analysis here is excellent, I wish that a little more space had been given to these works, since they are not well-known and suggest ripe avenues of interpretation. For example, because of their large scale, it is difficult for readers to fully understand the programs discussed in the two battle maps at the Brittany American Cemetery and Épinal American Cemetery. While the book’s illustrations are helpfully reproduced in color, one can only see small sections of the larger programs of these two expansive works. While this visual limitation is likely unavoidable, given the location and size of the works, a more extensive discussion of the program would be helpful here. The innovative use of materials in the Brittany map, which is composed of polychrome “exposed aggregate concrete,” seems to contrast considerably with the more traditional use of glass mosaic at Épinal (103). Indeed, one might argue for a stronger connection with Byzantine art, based on the use of gold and the outlined drapery folds seen in the figures. Were these choices personal or connected with diplomatic concerns specific to these sites? I also wondered about the connection of these works, which are in essence large-scale maps, with the history of mapmaking.

In the final chapter, Lemay discusses the leadership and organization of the American World War II cemeteries in France, including some fascinating insights about the struggles between artists and architects in New York and Washington, DC. While traditionalist advocates for stripped-down modernism based in Washington, DC, prevailed in the overseas cemeteries, they faced criticism from more avant-garde practitioners. Aside from stylistic concerns, Lemay highlights the cronyism in the Washington, DC, group that led to the reliably conservative style that emerged in the cemeteries. While the chapter is strong, I would have preferred some of this material earlier in the book, as it helps to explain key elements of the design of the cemeteries. I also wondered about the overall relationship between the cemeteries and other government-funded arts projects. The cemeteries are sandwiched between the Works Progress Administration (WPA) projects of the 1930s and 1940s and the efforts by the State Department and Central Intelligence Agency (CIA) to put modernism to use in their promotion of democracy.2 The WPA is generally associated with classicizing modernist architecture and the use of didactive murals, elements that seem operative in the overseas cemeteries. Later government programs largely promoted more avant-garde styles, such as Abstract Expressionism, as products of American democracy. While the diplomatic aims of the cemeteries were similar to the State Department and CIA exhibition programs, the methods in use in the overseas cemeteries reflected those of the WPA. Situating the overseas cemeteries in this narrative of government patronage might be revealing.

Overall, Lemay’s book, with its in-depth research, is a rich addition to the field of memory studies. It opens up new avenues of study and positions American art in a truly international context. Interdisciplinarity is always a tough balancing act, but scholars will benefit immensely from Lemay’s field work in France and from her nuanced analysis of these significant sites.

PDF: Reason, review of Triumph of the Dead

About the Author(s): Akela Reason is Associate Professor of History and Director of Museum Studies at the University of Georgia