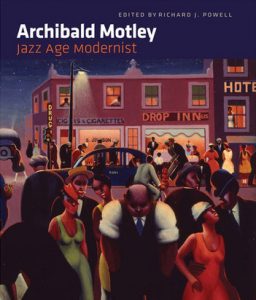 The exhibition catalogue provides deep analyses of the art and life of Motley, called a “Jazz Age Modernist” in the title, who combined his academic training at the Art Institute of Chicago with modernist elements. As Powell explains in his essay entitled “Becoming Motley, Becoming American,” during the period between the two World Wars Motley combined the abstract Cubist and Expressionist forms with African American “stylizations and design sensibilities” (122). Consisting of five essays from a variety of disciplines and perspectives –art history, personal memories, curatorial practice and American Studies –along with an artist chronology, this catalogue provides a study of an important African American artist that will appeal to both scholars and the public alike. Specific themes addressed across the publication include the relationship between his art and jazz, his focus on a particular area in Chicago, his representations of the New Negro Man and Woman, and his sojourns in Paris and Mexico.

This catalogue opens with a personal account by the renowned African American artist and scholar David C. Driskell, who first became aware of Motley’s paintings while a student at Howard University in 1952. Driskell’s visits to the artist’s studio began when he selected works for the exhibition entitled Two Centuries of Black American Art, 1970-1950 at the Los Angeles County Museum in 1975. He subsequently curated for the Cosby Collection of Fine Arts, which led to further interactions with the artist. Driskell observes that Motely was reluctant to discuss race or stereotypes, but nevertheless felt his art provided a commentary about racial equality in the United States. Not surprisingly, most of the essays that follow in the catalogue specifically take up Motley’s portraits of nonwhite figures, arguing for their connections to the artist’s interests in identity and self-perception.

Olivier Meslay’s essay, “Motley’s Paris Missed Opportunities,” takes up Motley’s year in Paris as a recipient of the John Simon Guggenheim Memorial Foundation grant in 1929. Meslay, a curator from the Dallas Museum of Arts, convincingly exposes the contradictions between Motley’s summary report to the Guggenheim Foundation, which recounts his visits to renowned Parisian museums and galleries to view Old Master paintings, and the artist’s journal entries. The latter suggests that Motley isolated himself in his studio, employing models from the “non-Anglophone immigrant” community (86) to represent French cafés, streets and cabarets. Motley’s Blues (1929) marks the sole work based on his experience of the Bal Colonial that attracted people from the Caribbean and Africans from French colonies. Motley proudly claimed that in this painting he did not represent any Americans—either white or black—but instead French from Senegal, Martinique, or North Africa. Meslay’s essay provides details about Motley’s life in Paris based on his personal journal but a further analysis of this “non-Anglophone immigrant” community that he painted would be a welcome addition.

Motley’s interest in “racially mixed” people of African descent while living in Paris would have contributed to what Powell calls “a virtual rainbow” of skin colors among the African American community in Chicago. As the art historian Amy M. Mooney in her essay “The Portraits of Archibald Motley and the Visualization of Black Modern Subjectivity” explains, Motley emphasized the variety of skin tones among African Americans. She notes that Motley’s portraits of the “New Negro Woman” accordingly consist of generic types whose skin tones, bobbed hairstyles, make-up, and fashion adhered to contemporary advertisements, contributing to a sense of black women’s pride of appearance and control over themselves. Motley’s portraits of “racially mixed women” moreover “countered the trope of the tragic mullata” and offers a sense of confidence in one’s blackness. Powell similarly argues that “Chicago-manufactured cosmetics marketed to peoples of color—were linked by an unvoiced but ubiquitous ideal that placed color—racial, artistic, and figurative—at the center of black Chicago’s identity and self -perception” (138).

Mooney elaborates that the artist in his portraits of confident, cultured, and tastefully clothed “New Negro Women” critiques and rejects the popular images of the Mammy and Jezebel. Motley’s intention to “bring about a ‘better understanding between the races,’” Mooney summarizes, “enabled blacks to appreciate their own racial identity and hopefully for whites to “dispel stereotypes and end racism” (32). Mooney movingly relates Motley’s emphatic representations of African American women to his portraits of his mother, Mary Huff Motley, emphasizing her mixed race (having been fathered by a white man), education, and adherence to popular feminine cultural fashion, as well as more independent behavior such as bike riding in the streets of Paris. Mooney insightfully argues that his Portrait of a Cultured Lady (1948) is both generic and specific: a portrait of Edna Powell Gayle who represented Motley in her Chicago art gallery and a prominent woman in black bourgeois culture who worked on behalf of the NAACP, the Urban League Chicago, and a variety of Chicago organizations. Her “display of opulence and femininity” with carefully applied makeup, lacquered nails, jewelry, and dress shows the ways in which she performed the role of a modern New Negro Woman.

Davarian L. Baldwin’s essay “’Midnight was Like the Day’: Strolling Through Archibald Motley’s Bronzeville,” addresses the New Negro Woman and Man who lived in the Chicago’s Southwest side, known variously as “the Stroll,” “Bronzeville,” and “the Black Belt.” Baldwin’s focus upon this particular part of Chicago, its black culture, and Motley’s fascination with painting this area’s culture and people enables the reader to distinguish Motley from other African American artists who focused more on Harlem in New York City. This Chicago area marked the intersection of public entertainment venues and businesses, as well as advertisements, music, and sports venues. Baldwin nicely defines the term “the Stroll” as a specific black “town square,” and a” black public sphere of race newspapers, race records, race films, race league baseball, race artistry . . . buildings, amusements, sidewalks, and signposts.” As he explains, “the Stroll” also refers to the experience of modern day and nighttime leisure, religious, and business pursuits that “showcase[s] . . . black ‘expressive behavior’” while strolling through this “cordoned-off black city-within-a-city” (48-49). Baldwin has a section called “From Black Belt to Bronzeville” in which he provides a plethora of information about the businesses, amusements, lifestyle, organizations and institutions during the day and nighttime when the “old settlers” merged (sometimes uneasily) with the newly arrived migrants to create and participate in new modern leisure activities and businesses again providing information that enables the reader to consider the relationships to and differences from the New York City Harlem Renaissance.

Powell’s final essay, “Becoming Motley, Becoming Modern,” provides the most comprehensive definition and origin of “the colloquial names for black Chicago, Bronzeville” and the “perhaps more negatively perceived” term “the ‘Black Belt’”: “Chicago’s culturally thriving, media-savvy, African American community during the interwar years.” Powell also nicely analyzes the meaning of Bronzeville in terms of its reference to the Bronze Age and metallic alloy to “reconstruct black Chicago’s public perception, from desultory and troubled, to ambitious and glowing” (138).

Although Motley focused mainly on the lives of the New Negro in Chicago, he also spent time in Mexico in the 1950s and early 1960s where he joined his nephew, the novelist Willard Motley. Powell notes that both Motleys focused on the common folk, ignoring Mexico’s more popular tourist attractions. I would have loved Powell to compare the painter’s sojourns, works, and commentary about Paris and Mexico; it seems that in both places he bypassed the tourist sites to either focus on African descendant immigrants or Mexican “markets, bars, and houses of prostitution” (135). Rather than retreat in his studio with models, however, Motley in Mexico continued his “irreverent, dark sense of humor,” which Powell also notes in the artist’s paintings of working class African Americans in Bronzeville, including his focus on Pentecostal subjects. Powell appropriately quotes Alain Locke’s earlier assessment that “Motley seems more and more fascinated by the grotesqueries and oddities of Negro life which he sometimes sarcastically, sometimes sympathetically, depicts.”

Powell does a wonderful job of analyzing works of art in terms of subject, style, and composition to elaborate on this assessment.
Powell moreover analyzes Motley’s paintings within the context of jazz: his “jazz-inflected compositions and colors” and the “’blues aesthetic’” (110). His “multiplicity of compositional elements, their interruption and reintroduction, in Blues [1929] were not unlike the ‘riffs’ and ‘stop-time’ of musical relative Louis Armstrong” (120). Powell also observes that Motley often represented “the contemplative New Negro,” who is related to the iconography of the “fat man,” “a kind of surrogate for the real-life voyeurs” who could be Caucasian, African American, or Motley: “always present and well-dressed, yet more a bystander than an active participant,” an alter-ego (117).

This catalogue was filled with a plethora of colored and black-and white illustrations as well as colored details, which led to my confusion in attempting to correlate catalogue number references within the essays to specific reproductions. Rather than have them sequentially located within the catalogue, they follow no logical order. Not until after reading all of the essays did I find at the end of the catalogue postage-stamp-like reproductions in sequential order (157-61). In other words, it would have been helpful for specific page and catalogue numbers within the catalogue essays so that the reader could coordinate viewing the reproductions. This is a minor critique that has to do more with those who edited the catalogue than with its content. Despite this, Archibald Motley: Jazz Age Modernist remains an excellent, in-depth analysis of Motley’s art, which addresses subject, style, and composition within a historical and cultural context. The reader learns not only about this specific artist, but African American culture in Chicago, and African American art as well.

About the Author(s): Vivien Green Fryd is Professor of Art History at Vanderbilt University.