As an art historian, there are a few things you never want to read about; tear gas residue on paintings is one of them.

This was just one of the shocking consequences of the insurrection at the United States Capitol on January 6, 2021. Following a rally on the National Mall, thousands of pro-Trump supporters advanced to the Capitol grounds in an attempt to disrupt a joint session of Congress held to certify the election of President Joe Biden. Widespread damage to the building’s historic interior and looting of government property ensued as the rioters pressed through the Rotunda into legislative chambers and offices. Five individuals died during or after the attack; at least 140 suffered injuries; and, as of the drafting of this essay in April 2021, more than four hundred have been charged with criminal activities.1

The human tragedy of this assault will endure long after the Capitol’s paintings and sculptures have been restored.2 Photographs of the day—and scenes of the succeeding weeks of occupation by National Guard troops—may likewise continue to haunt our collective national conscience. As coeditors of this colloquium, two images gripped our attention. In the first one, Anna Moneymaker, a photographer for the New York Times, captured US Capitol police officers carrying riot shields through the Crypt, the room directly beneath the Rotunda (fig. 1). A small golden star, centered on the floor, denotes the point from which all streets in Washington, DC are laid out and numbered. More poetically, it also marks the architectural center of the “People’s House,” the navel of the American republic itself, and the site where George Washington was originally meant to have been buried. 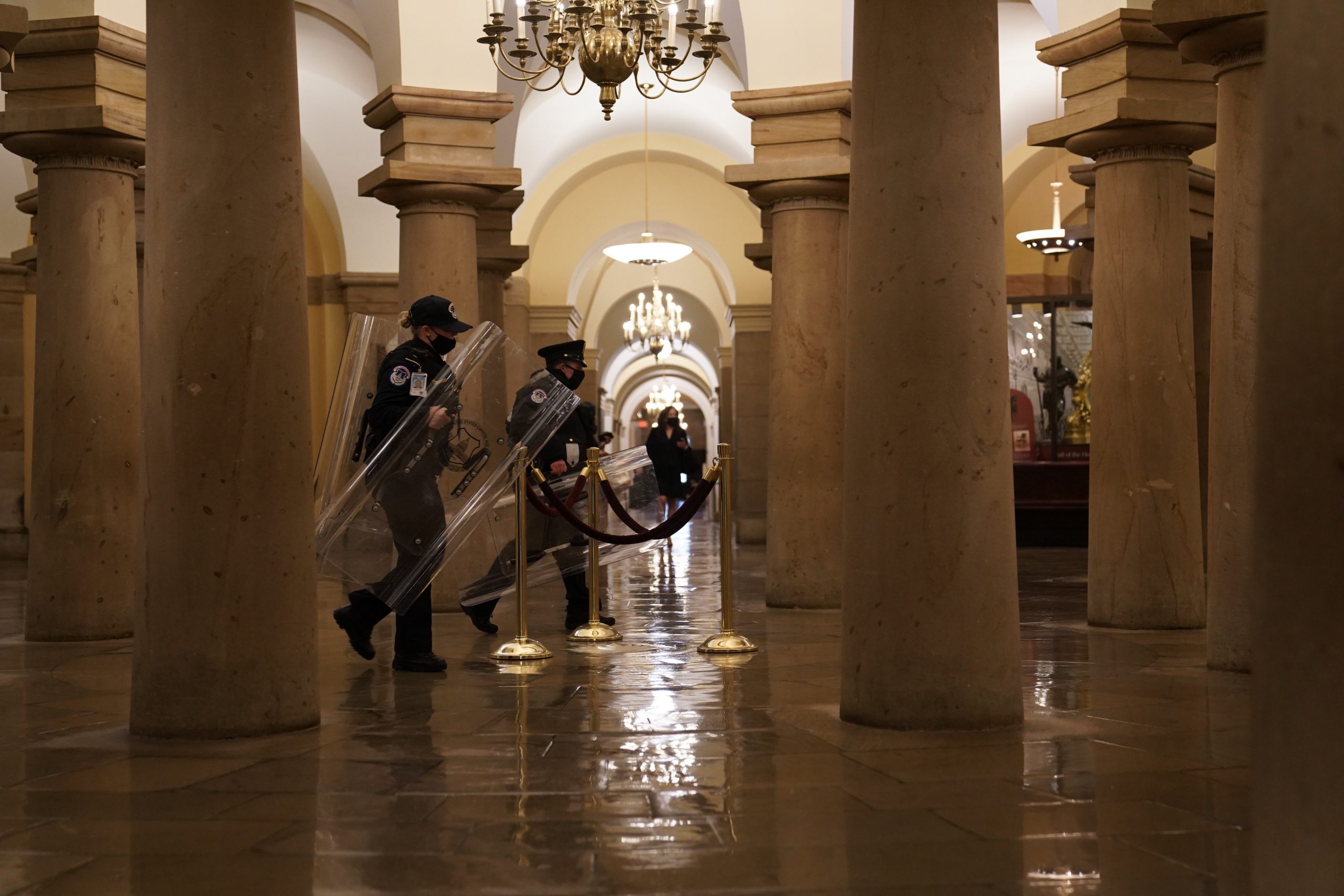 The second photograph, by New York Times photographer Jason Andrew, is equally resonant in its connotations of violation: it pictures a smeared bust of President Zachary Taylor staring through plastic wrap like a mummified Christo (fig. 2). The image also recalls one of the most poignant images of 2020, snapped by photographer Al Bello, of two family members embracing through a COVID-safe sheet of plastic (fig. 3). “Plastic” derives from a Greek word meaning to shape or to mold, but in these images, it makes visible the connectedness of the riot and the pandemic: the manifold bruisings—figural and actual, material and psychological—that bodies have endured over the course of the past year. 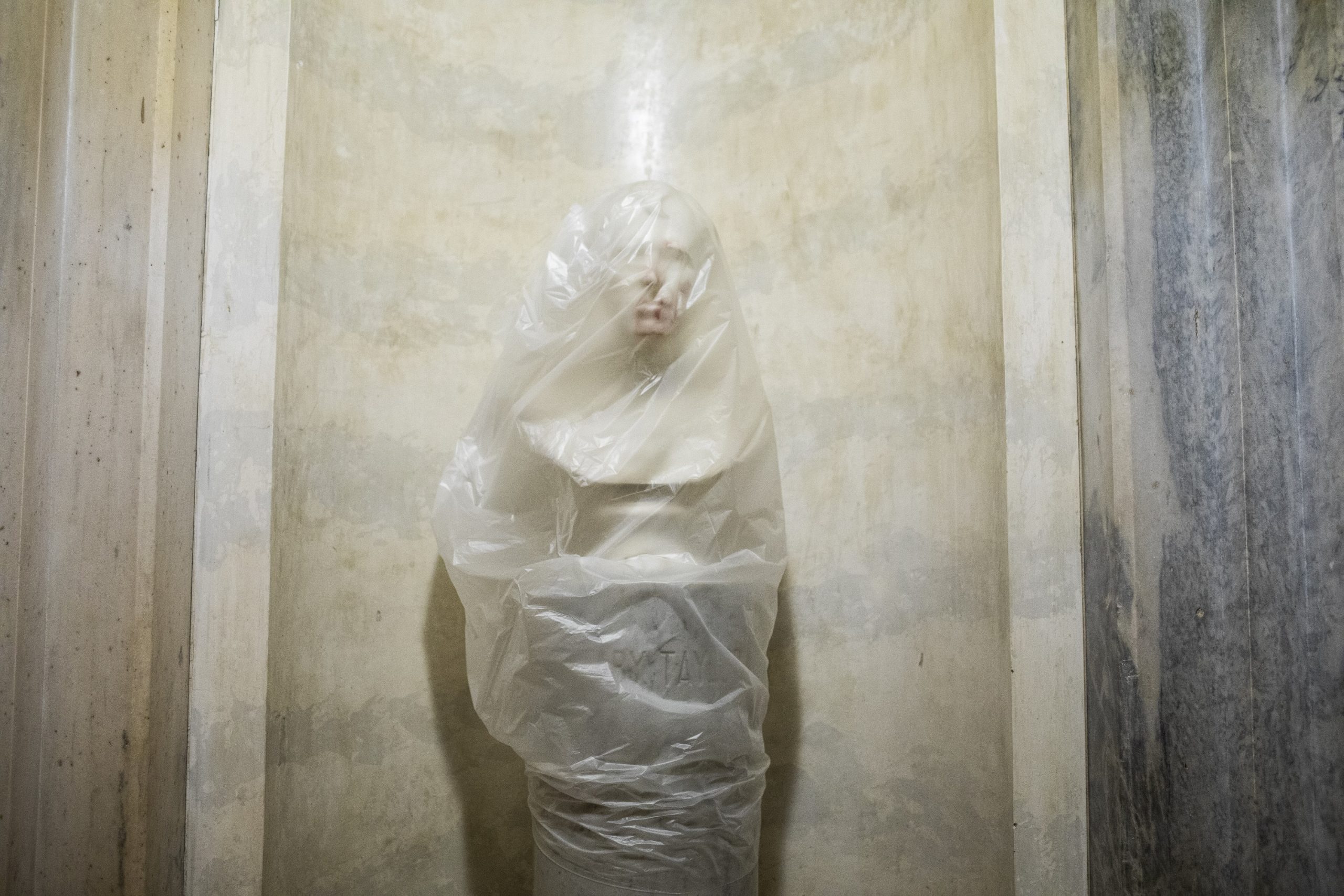 Fig. 2. “The bust of President Taylor appeared to have been smeared with blood in the Capitol,” January 7, 2021. Photograph courtesy Jason Andrews/New York Times 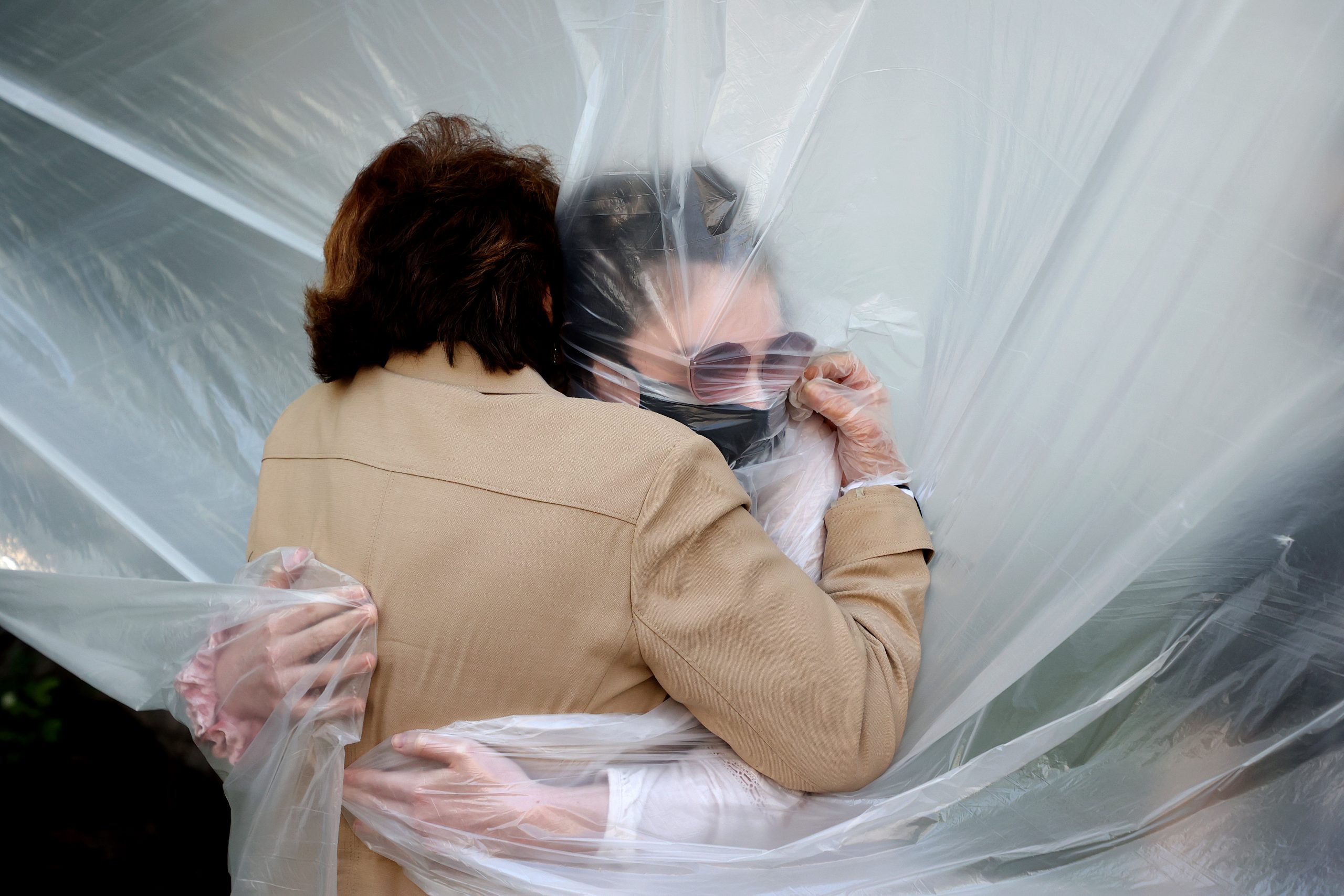 Fig. 3. “Olivia Grant hugged her grandmother, Mary Grace Sileo, through a plastic drop cloth hung on a clothesline. It was their first contact since the start of the lockdown caused by the pandemic,” May 24, 2020 (Wantaugh, NY). Al Bello/Getty Images. Photograph courtesy Al Bello/New York Times via Getty Images

As these two examples suggest, the photographs of January 6 reveal complicated stories. Upon publication, these images focused international attention on a place rich in art and history, a place that is significant in multiple and competing ways. Portraits line its hallways, and sculptures populate its numerous galleries. The Rotunda, which is encircled by massive history paintings and a grisaille Frieze of American History, and crowned by a fresco showing George Washington ascending heavenward, is a testament to the importance of congressional patronage of the arts during the nineteenth century.3 The building itself is regarded as a neoclassical monument to the ideal of “E Pluribus Unum.”

Many of the photographs of the insurrection and its aftermath, however, offer telling contrasts between the democratic ideals enshrined in much of the art and the rioters’ vehemence. Others implied uneasy echoes between the violence of January 6 and past centuries of American history: as scholars and activists have long argued, the Capitol features paintings, busts, and sculptural reliefs that glorify histories of white supremacy—racial, religious, territorial, imperial, patriarchal—and represent scenes of Indigenous displacement, subjugation, and death.4 Together, they also invite reflection on what cannot easily be seen: the work of enslaved laborers who constructed the Capitol building, and the art work of women, Black, and Indigenous makers, which is underrepresented in the Capitol collections.

This colloquium takes up these timely issues to ask how the art and architecture of the US Capitol shapes our understanding of America past and present. In part, this forum builds on a public program organized by the Pennsylvania Academy of the Fine Arts (PAFA) just two weeks after the insurrection: “Art at Noon—Reframing the Legacy of the Capitol.” The colloquium includes essays by the four speakers from the PAFA event (Christian Ayne Crouch, Jacqueline Francis, Vivien Green Fryd, and Amy Werbel). In addition, it features the voices of emerging scholars (Kelvin L. Parnell Jr. and Natalia Ángeles Vieyra) and the curator for the Architect of the Capitol (Michele Cohen).

We invited these authors to reflect on the acts of material and racial violence we collectively witnessed on January 6 within the aesthetic, historical, and political spaces of the Capitol. How do the visual programs within the building represent who we are as a nation—our best aspirations and our most troubling legacies? Can we imagine a more inclusive future for this site, one that reckons with historical erasures and expands historical narratives? How are contemporary artists already showing the way forward with works of art that expose systemic injustice and encourage community building?

Our contributors responded with emotional and nuanced interpretations of the Capitol’s paintings and sculptures. Their essays cut across varied ideological, formal, and material planes as they reflect on the interactions of rioters, members of the National Guard, congressional staff, and members of the public with the art and architecture of the Capitol. Crouch, Francis, Fryd, Parnell, and Werbel explore intersections of race, gender, and violence in images captured during the siege and its aftermath. Cohen, Crouch, Fryd, and Parnell focus on sculpture, including the one that tops the Capitol dome and reappears, in another medium, inside the building: Thomas Crawford’s Spirit of Freedom. Werbel plumbs the implications of political symbolism and free expression, while Cohen, Crouch, and Vieyra probe other intersections of national and visual representation: legislative agency, Indigenous visibility, and imperialism. 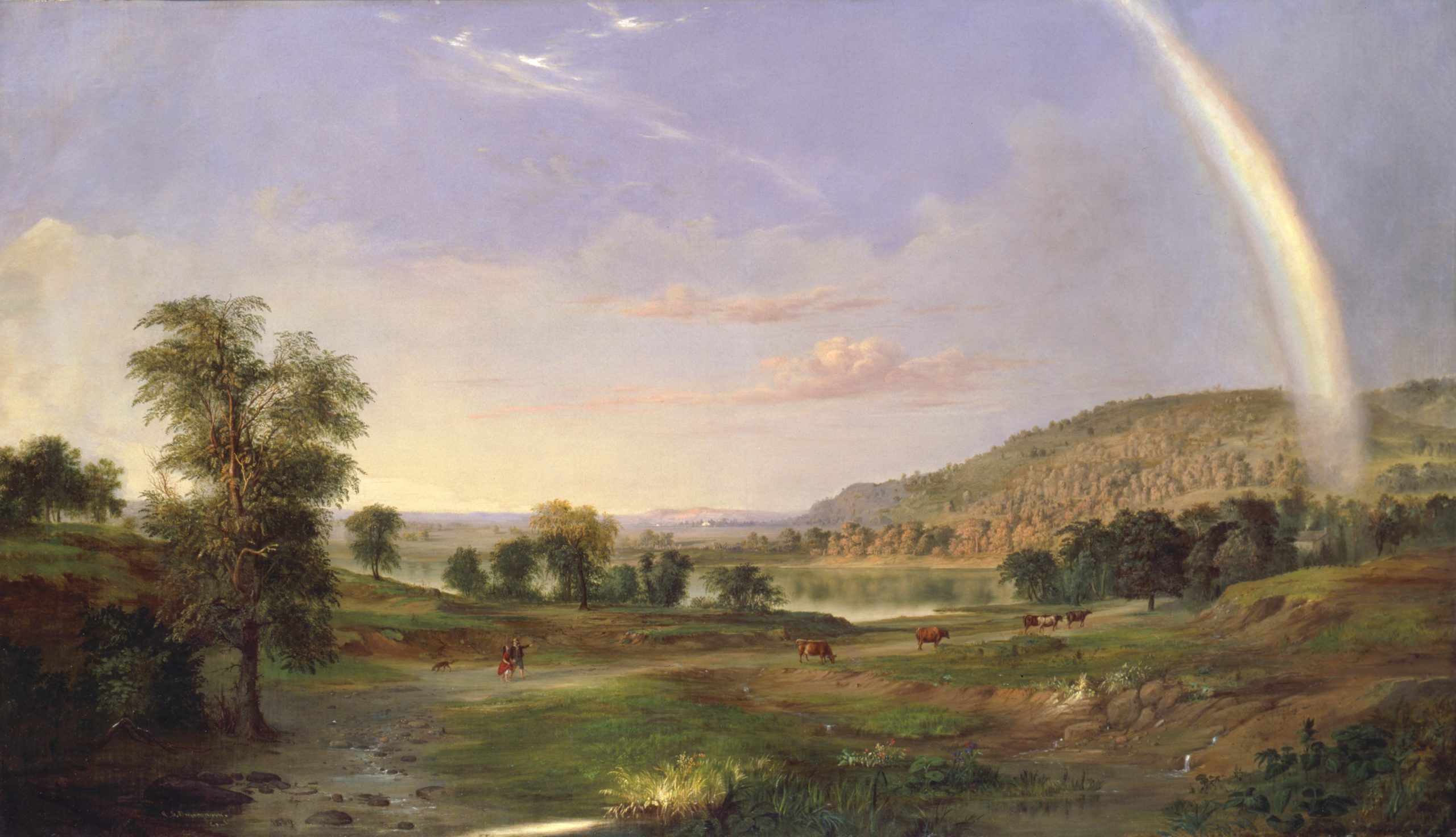 Fourteen days after January 6, the rituals of Inauguration Day attempted to salve the wounds of the riot with heartening and healing moments. One of those included a work of art. First Lady Dr. Jill Biden helped select a work from the Smithsonian American Art Museum by nineteenth-century African American landscape painter Robert S. Duncanson (1821–1872) to feature as part of the Inaugural’s gift-giving ceremony (fig. 4).5 Photographs show the painting temporarily transposed over one of John Trumbull’s four history paintings that chronicle founding moments in the creation of the United States; the unseen canvas in this photograph celebrates George Washington, first President and enslaver.6 Intentionally or not, the juxtaposition cut a contrast with the display of a work by Duncanson, a freeman whose landscapes have invited interpretation as parables of abolition, yet who had to flee to Canada during the Civil War for his own safety. Further visual-historical narratives lurk at the edges of this photograph: in a sandstone relief carved in 1827 by Nicholas Gevelot, William Penn negotiates “peacefully” with the Lenni Lenape for their land; beneath appears a bronze statue of President Andrew Jackson, perpetrator of the barbaric Trail of Tears.

“The racism structured into every aspect of the coup attempt is a call to heed our own history,” Timothy Snyder, Levin Professor of History at Yale, remarked in the New York Times Magazine. “Serious attention to the past helps us to see risks but also suggests future possibility. We cannot be a democratic republic if we tell lies about race, big or small.”7 While the rhetoric of the Biden/Harris inauguration called on Americans to heed the better angels of their nature, speakers also reminded us that the Capitol itself was built by enslaved labor on colonized Indigenous lands. Within these contexts, the Duncanson painting offers a measure of hope, an expansion of artistic voices in the Capitol, and a reminder that we need to know and acknowledge our history in order to move forward as a country.

PDF: Bellion and Marley, Art and Politics in the US Capitol