The fourth and final installation of Give It or Leave It, an exhibition of recent works by Cauleen Smith, went on view at the Los Angeles County Museum of Art (LACMA) in 2021. Visitors were greeted by a banner that floated above the entrance to the gallery (fig. 1). The phrase “I appreciate you in advance” was written on the banner in fabric letters, their irregular edges and handmade quality evoking the craft of protest banners and quilts. But the use of shiny silver fabric, which reflected the glow of an eerie red spotlight, imbued the work with a futuristic feel. The lighting cast a shadow that doubled the anticipatory message onto the wall behind it— “in advance,” given in advance. Below the banner, a doorway opened to a darkened space pierced by colored lights, emanating layered and indecipherable sounds. This initial encounter with Give It or Leave It set the tone for the small but effective show, which stitched together the world making of women’s work, science fiction, and the radical politics of generosity. 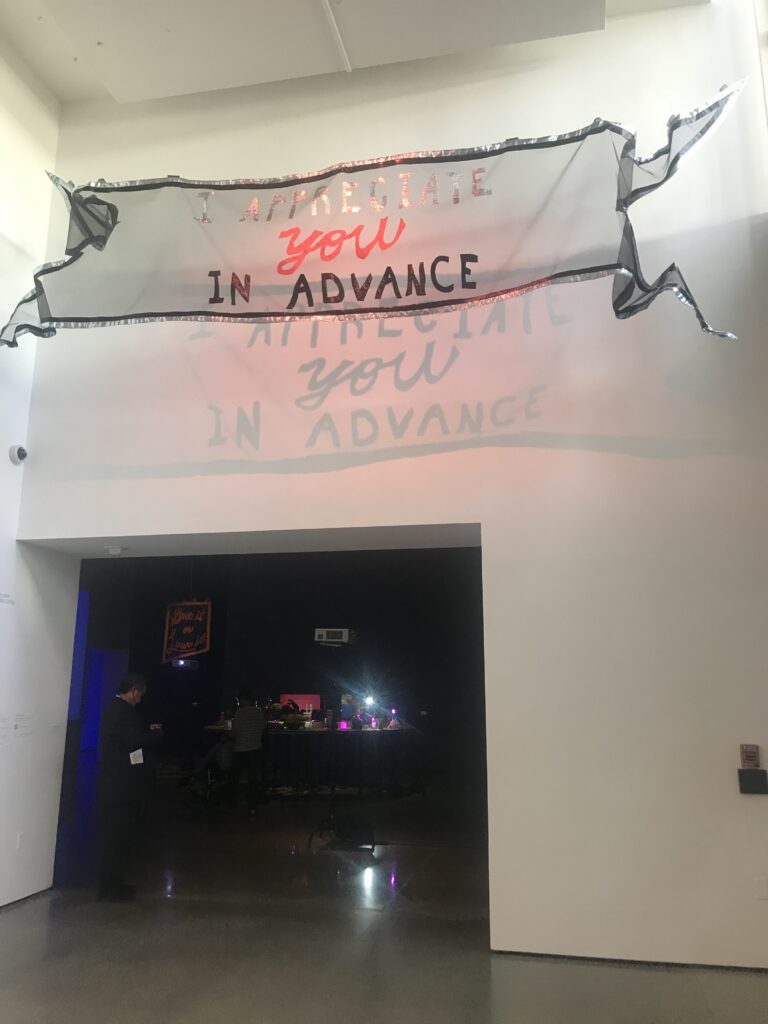 Although comprised of five video works and nine installation pieces arranged across three rooms, Give It or Leave It essentially functioned as one immersive whole. The first gallery was largely empty of objects but replete with light and sound. Multicolored gel filters covered a floor-to-ceiling glass wall, muting the bright California sun and rendering strange the view of LACMA’s palm-tree-studded campus. Across from the windows was a wall covered in intricately patterned, shimmering metallic wallpaper. Pinpricks of light, emitted by a cluster of rotating disco balls installed at the far end of the gallery, traveled across the space, landing on the floor, the ceiling, the visitors, and the artworks.

A screen tucked into the corner of the gallery showed the short film Pilgrim (2017), a dreamlike meditation on the exhibition’s central themes. Pilgrim begins with the voice of Alice Coltrane introducing a live piano performance, which provides a suspenseful soundtrack to the rest of the film. The camera slowly pans over piano keys and meditation pillows at the Sai Anantam Ashram, a Hindu spiritual sanctuary that Coltrane founded among oak trees on the slopes of the Santa Monica Mountains. Next, the spaceship-like spires of the Watts Towers appear, silhouetted against a cloudless blue sky. The celebrated hundred-foot structures, which stand in a Los Angeles backyard, were built over the course of three decades by Sam (Sabato) Rodia, a working-class Italian American immigrant. Later, the camera proceeds through a cemetery, its carpet of lush green grass dotted with simple weathered headstones. The camera rests on the tombstone of Mother Ann Lee, one of the founders of the Watervliet Shaker settlement in Upstate New York. Best known today for their adherence to strict vows of celibacy, the Shakers were also fiercely egalitarian. Pilgrim is largely devoid of human presence, with the exception of two Black women who appear briefly together at the Ashram. Lacking a linear narrative focus, the film lingers on seemingly mundane details at the three sites. Together with Coltrane’s performance, this emphasis transports viewers into the “elsewhere” conjured by these material worlds.

Coltrane’s Sai Anantam Ashram and Rodia’s Watts Towers reappeared frequently throughout the exhibition, along with the Shaker spiritualists Mother Ann Lee and Rebecca Cox Jackson and the communities they founded in Watervliet and Philadelphia. The utopian experiments and visionary individuals explored in Pilgrim were joined by references to artist Noah Purifoy and the Outdoor Desert Art Museum, a landscape of large-scale assemblage sculptures in Joshua Tree National Park. The Combahee River Collective’s 1977 declaration of Black feminism was another key association in the exhibition; the group’s name references a Civil War raid led by Harriet Tubman that freed hundreds of slaves, and its politics point ahead to the Black Lives Matter movement. Despite this array of touchpoints, Give It or Leave It was far from a documentary compendium on the history of utopian practices in the United States. Instead, Smith used the show to weave these individuals, communities, and places together, creating new associations and transforming them into something more than the sum of their parts.

A photograph pinned to the center of the wall across from Pilgrim features eight young Black men and boys, lounging in stylish attire and listening to a portable radio as they lean against the mosaic benches of the Watts Towers. The photograph was part of a series of portraits taken by Life magazine photojournalist Bill Ray the year after the Watts Uprising in 1965. The photographs that Life published emphasize destruction and anger (“Watts Still Seething” was the issue’s tagline), but the unpublished photograph showcased in Give It or Leave It offers a counternarrative of community, ease, and art. Behind the photograph, the Watts Towers appeared again, printed on the retro-futuristic wallpaper, along with the Sai Anantam Ashram and other utopian geographies referenced in the exhibition. This wallpaper was repeated on the far wall connecting the first and second rooms, behind the disco-ball installation. A film projected onto the tableau examines spiritualist Rebecca Cox Jackson and her companion Rebecca Peroth, who took on Jackson’s surname and led the Philadelphia Shaker community after her death. Altogether, the photograph, wallpaper, and film comprised an installation entitled Space Station: Two Rebeccas (2018).

Around the corner, the twenty-two-minute film Sojourner (2018) powerfully reconfigures Bill Ray’s 1966 photograph, in which a dozen women of color pose in a structure at Purifoy’s Outdoor Desert Art Museum, staring straight out at the camera (fig. 2). At other moments in the film, the women read the Combahee River Collective Statement and stride past assemblage sculptures and Seussian Joshua trees to the words of Coltrane and Cox Jackson. In this way, Sojourner remixes these sources into an original vision of a Black feminist utopia that emphasizes the collective over the individual and makes manifest the potential of the past. 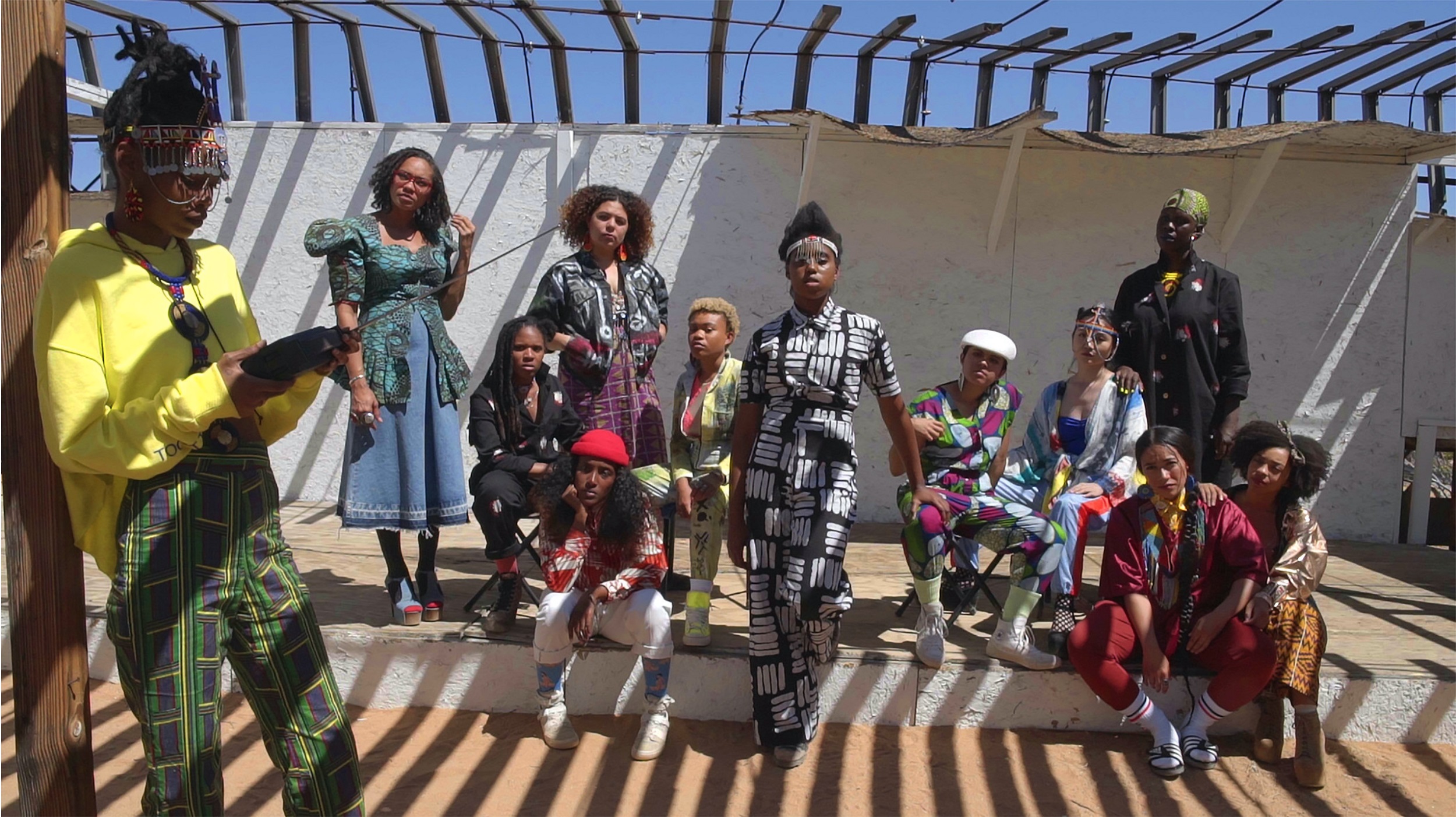 Turning the corner, the final gallery was occupied by the room-sized installation Epistrophy (2018), which was recently added to the Los Angeles County Museum of Art’s permanent collection (fig. 3). Arrangements of objects on a central table—a taxidermied raven, a carved African figurine, and a Magic 8-Ball—were projected onto large screens against sweeping landscapes taken from NASA and National Geographic. As with the rest of the exhibition, Epistrophy effectively toggles between the material and the virtual, the mundane and the cosmic. In the succession of rooms, the viewer continuously moved between the realms of the material and the local, the ethereal and the otherworldly.

The mesmerizing use of video in Give It or Leave It, as well as the cinematic quality of the exhibition as a whole, reflects Smith’s skills as a filmmaker. Smith first received attention for Drylongso, a feature film she made in 2000 while earning an MFA from the University of California, Los Angeles. Since then, Smith has created a range of multimedia installations that usually include videos but also wallpaper, banners, and parades of marching bands. Her work often engages Afrofuturism, a creative mode that merges African diasporic cultures with the technological innovations of science fiction. 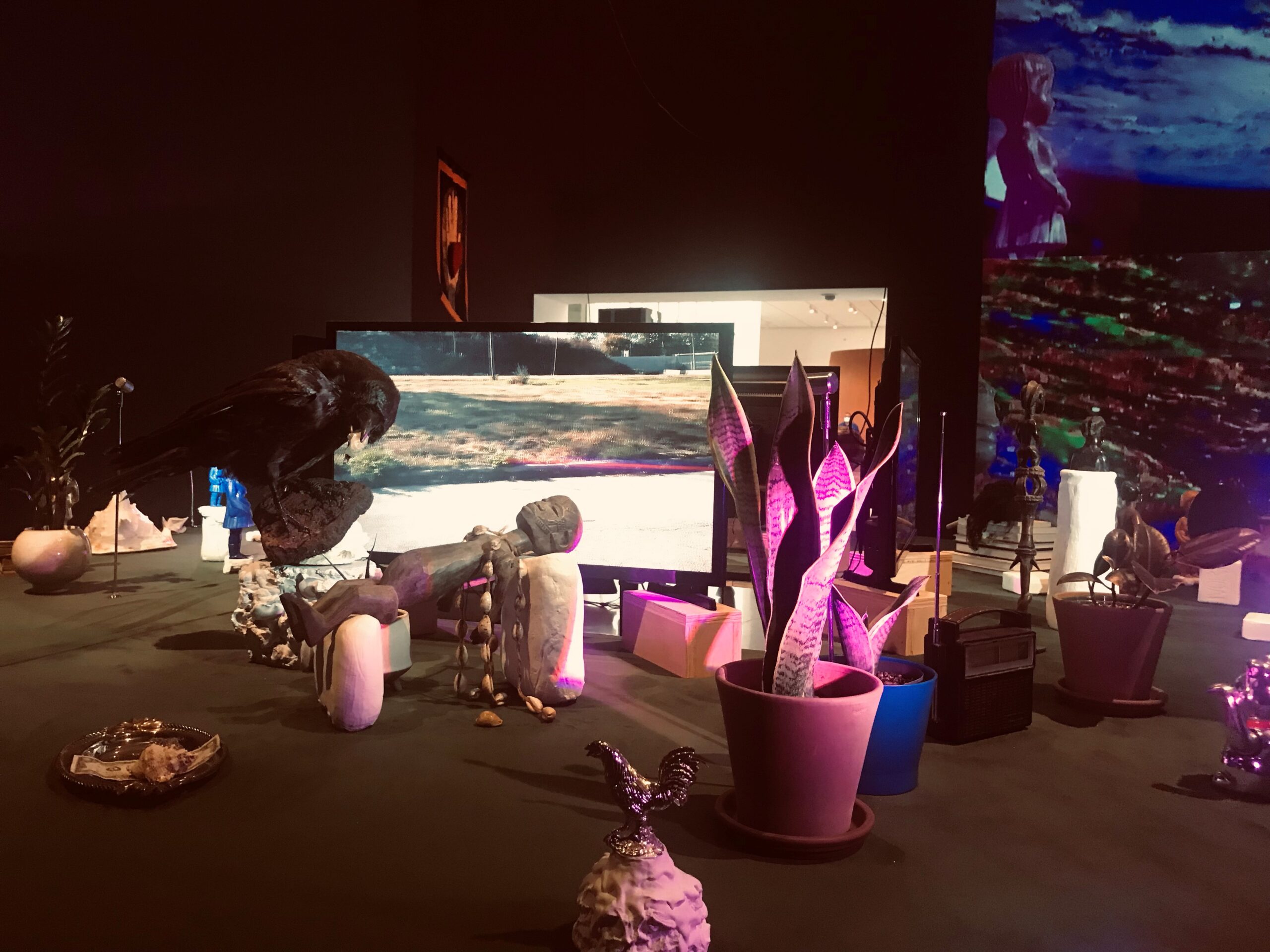 The term “Afrofuturism” was coined and theorized in the 1990s by scholars like Mark Dery and Alondra Nelson, although it names a preexisting tendency already evident, as for example in the work of jazz composer and performer Sun Ra.1 One of Afrofuturism’s major critical interventions is to upend the racist developmental schema that consigns people of African descent to the past and casts the progress of the future in the mold of universal “race-blindness”—read: whiteness. In the past decade, Afrofuturism has entered mainstream culture; it appears in the music of Janelle Monae, the Black Panther movie, and a flurry of online think pieces about the prescient nature of Octavia Butler’s writing.2 Afrofuturism is also a major actor in the contemporary art world, appearing in the work of globally celebrated artists like Wangechi Mutu, temporary exhibitions like Access to Mothership: Voyage Into Afrofuturism (recently on view at the Oakland Museum of California), and permanent installations such as the Metropolitan Museum of Art’s new Afrofuturist period room. Smith’s work, as presented in Give It or Leave It, participates in this rich field. The exhibition enacted a multitemporal set of possibilities that enmeshed the future, present, and past into a shared vision articulated through the specificity of Black culture, especially Black feminisms.

Despite the ways that Give It or Leave It transported museumgoers through time and space, at LACMA the exhibition had a resonance that was site-specific to Southern California. After all, the Watts neighborhood, where the Watts Towers stand and where the aftermath of an urban uprising offered the materials for Purifoy’s first assemblage sculptures, is just a fifteen-minute drive south of the museum (without traffic). Purifoy’s Outdoor Desert Art Museum is a short road trip away, while Coltrane’s ashram was nestled in the nearby Santa Monica Mountains before wildfires burned it down in 2018. It comes as no surprise that Smith was born and raised in California and recently moved back to the region to teach at the California Institute of the Arts. Yet for this reason, the aspects of Give It or Leave It that referenced Shaker communities, all located in the Eastern United States, felt out of step with the rest of the exhibition. The pastoral scenes of Upstate New York in Pilgrim, the writings of Cox Jackson recited in Sojourner, and books of Shaker gift drawings stacked on the table in Epistrophy likely had a more poignant impact when the exhibition was first installed at the Institute of Contemporary Art in Philadelphia in 2018. In Los Angeles, these touchpoints needed more emphasis and context to fully translate.

Despite its minor shortcomings, Give It or Leave It’s installation at LACMA benefited from a timely untimeliness. To put it mildly, numerous unexpected events took place between 2018, when several of the artworks were made and the show was first presented, and its final installation in the fall of 2021. We had been living with the warp of time and space that accompanies the tedious repetition of pandemic life and the omnipresence of Zoom meetings, interrupted by attempted government coups and nationwide uprisings against racist police violence. Life felt (and continues to feel) like a science-fiction film, perhaps even an apocalyptic one. But Give It or Leave It showcased the ways that Americans, especially Black women, have, do, and will materialize previously unimagined utopic potentialities. In this way, without disavowing the persistence of violence and struggle, the exhibition offered a profoundly hopeful message about our shared past, present, and future.

About the Author(s): Emma Silverman is a Lecturer at Sacramento State University and a Researcher at the National Park Service .