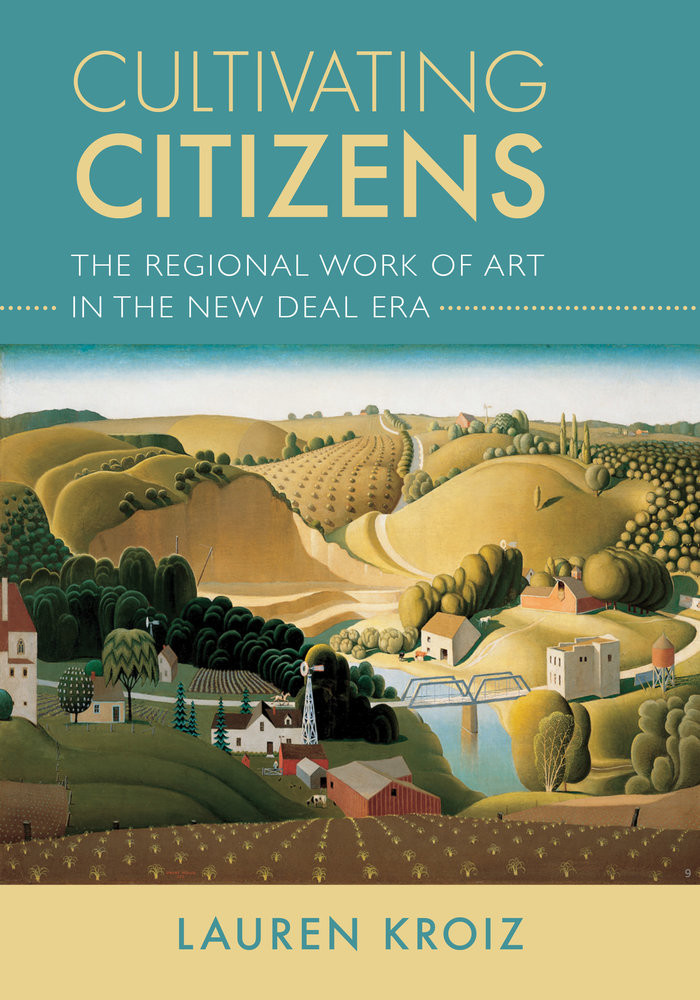 What is the role of the artist in twentieth-century American society, and how do museums and universities engage with living artists? What role does art play in the American academy and in American life? These are among the questions Lauren Kroiz wrestles with in Cultivating Citizens: The Regionalist Work of Art in the New Deal Era, a long overdue reevaluation of the American Regionalist triumvirate of Grant Wood, Thomas Hart Benton, and John Steuart Curry. Featuring a mix of lush color reproductions, black-and-white documentary photographs, and preliminary sketches, and drawing on a wealth of primary sources, including special collections at the Universities of Iowa and Wisconsin, the Archives of American Art, and the Archives of the Kansas City Art Institute, Cultivating Citizens offers readers a compelling reexamination of the controversies surrounding the art and professional lives of these formidable personalities. Building on the earlier scholarship of Howard Singerman, A. Joan Saab, and Michael Denning, Kroiz demonstrates the important role that pedagogy played in American art during the 1930s and 1940s and provides readers with insight into the contested role of Regionalist art in the academy and American culture.1

Cultivating Citizens is organized into three parts, one each for Wood, Benton, and Curry, and begins and ends with a brief account of the life of Earl Sugden, a fifty-six-year-old Wisconsin farmer, painter, and gubernatorial hopeful who was featured in a March 1941 issue of Life magazine. Sugden provides a surprising but appropriate anecdotal framing device, as his work as a professional farmer, amateur artist, and aspiring politician sets the stage for Kroiz’s well-researched examination of the ways in which art, education, and politics intersected in mid-twentieth-century America. Each of the three parts, which can easily stand on its own, includes four chapters and uses the artist and his defining titular locale to explore the multifaceted and complex ways art influenced cultural and educational debates of the period. Examining the motivations of scholars, artists, and academic administrators, Kroiz outlines how the work of Wood, Benton, and Curry shaped public discourse on the role of art in American society.

“Part 1: Iowa” begins with Grant Wood’s short-lived Stone City Art Colony, continues through his time teaching in the newly created Department of Art and Art History at the University of Iowa, and concludes with his untimely death and posthumous reputation. With the attention of a journalist writing an exposé, Kroiz teases out the pedagogical and social tensions that pitted the University of Iowa’s leading art historian, German-émigré H. W. Janson, and its art department chair, Princeton-trained art historian Lester Longman, against Iowa’s native son Wood. Through their heated debates on the appropriate use of photography (is it a tool or a cheap trick that leads to overly commercialized images?) and the politics of verisimilitude (is it democratic or fascist?) to discussions about the purpose of art education (should it be mechanical and technical or part of a well-rounded liberal arts education?), Wood, Janson, and Longman influenced not only teaching at the University of Iowa but also the reception of American Regionalism across the country (Janson’s well known and influential History of Art did not include American Gothic [1930; Art Institute of Chicago] until 2007), and the institutionalization of art and art history departments at universities across the United States. As Kroiz shows, the ways in which the art and art history programs of today are conceptualized, taught, and situated in American universities is based largely on the debates staged in Iowa during the 1930s. Janson feared that embedding art in the university curriculum would lead to the commercialization and commodification of higher education, whereas Wood, influenced by both philosopher John Dewey and the European atelier system, envisioned art-making as dependent on the “mutual interdependence” of technical precision and personal expression (83). Kroiz’s discussion illustrates the stakes of this debate in her thoughtful views about Wood’s Sentimental Ballad (1940; New Britain Museum of American Art)—a painting made at the behest of the Association of American Artists to encourage popular interest in John Ford’s film The Long Voyage Home—but that was harshly critiqued for its photographic realism and led to accusations within the department that “Wood applied, secretly and unethically, a practice derived from commercial art that discredited him both as a painter and a teacher” (57). For Longman, art history formed the bridge that mediated between the technical aspects of art education and the intellectual objectives of the liberal arts, which led him to establish a curriculum for the modern MFA degree that integrated both disciplines and trained a generation of professional artist-teachers. Certainly higher education today is largely commodified, and the factors that contributed to the reframing of the university as a business have gone far beyond art and art history departments, but Kroiz’s careful analysis of the significant pedagogical contests that unfolded in Iowa illustrate larger issues within art, education, and society that we continue to grapple with today.

“Part 2: Missouri” shifts to Thomas Hart Benton, the Kansas City Art Institute, and the Nelson Gallery of Art and Atkins Museum. Here, debates raged between Benton and the Harvard-trained museologist Paul Gardner: How should museums form their collections? Should educational staff be paid? What is the public that museums serve? What are the museum’s responsibilities to living artists, to art historians and scholars, and to children and their families? Limited by the constraints of William Rockwell Nelson’s will, which funded the museum’s building and collection but not education or outreach, Gardner recruited women from the Kansas City Junior League to serve as unpaid docents, a system quickly adopted by museums across the United States. As an artist and teacher at the nearby Kansas City Art Institute, Benton felt usurped and emasculated by Gardner’s replacement of professionals, like himself, with female volunteers—feelings he visualized in the Kansas City panel of A Social History of the State of Missouri (1936; State Capitol, Jefferson City, MO), in which he “rendered the steps of the gallery’s instantly recognizable Neoclassical façade behind scenes of bloody slaughterhouse labor and political corruption” (99). As Kroiz notes, Benton constructs the scene to align the young museum visitors and their female teacher/docent with the knocker of the slaughterhouse, thereby situating them as docile followers of the museum’s agenda who passively absorb art without question or action. Gardner, who had been trained by Paul Sachs at Harvard University’s Fogg Museum in a museology program based largely on the European system, emphasized historicism and formalism in his art education program. As observed by noted museum director John Cotton Dana and others, Sachs’s museum studies program went a long way toward professionalizing American museums, but it also enshrined art as a rarified object removed from the daily concerns of the public—something to be looked at but not touched or made.2 This belief ran counter to the concerns of Regionalists such as Benton who, following Dana, saw art as integral to everyday life and vital to the spread of democratic principles. For Benton, art was active, not passive, but the educational programs offered by the Nelson Gallery stressed stylistic analysis and connoisseurship, not art making—they even hosted a junior docent program to train the next generation in aesthetic appreciation. Benton, as an artist and art teacher, advocated for the model of art exhibition espoused by the Association of American Artists (AAA), the New York City gallery that sold low-cost prints in department stores (and not coincidentally represented Benton, Wood, and Curry), and denounced the Nelson Gallery as “a graveyard run by a pretty boy with delicate wrists and a swing in his gait” (146). The blatancy of Benton’s homophobia prevented his complaints from being taken seriously, and his volatile personality ultimately led to his dismissal from the Kansas City Art Institute, but Kroiz’s investigation reveals the ways in which the seemingly personal feud between Gardner and Benton was actually rooted in period debates about the aesthetic, pedagogical, and political roles of the museum in democratic society.

“Part 3: Wisconsin” focuses on John Steuart Curry and his position as artist-in-residence at the University of Wisconsin from 1936 until his death in 1946. The last of the triumvirate to enter the academy, Curry did not return to his native Kansas, but moved from New York City to Wisconsin, where he was recruited by the Department of Agriculture to work with rural sociologists and provide artistic training to farmers. Unlike the contentious situations Wood and Benton found themselves in, Curry worked collaboratively and collegially with Wisconsin administrators, faculty, students, and community members to demonstrate the sociological value of art. Even as modernists in New York City condemned Curry for making paintings that lacked technical skill, Curry’s role as artist-in-residence, rather than faculty in an art department, allowed him to advocate a “pedagogy of amateurism” that positioned his own struggles with technical proficiency as a strength rather than a weakness (168). Through insightful analyses of paintings such as State Fair (1919; The Huntington Library, Art Museum, and Botanical Gardens), The Stallion (1937; New Britain Museum of American Art), and Wisconsin Landscape (1938–39; The Metropolitan Museum of Art), Kroiz demonstrates how Curry’s paintings functioned pedagogically to illustrate local concerns and bring art to the people. As Kroiz notes, “Regionalists and their advocates believed that individuals who learned to make art also learned the tools to become modern citizens, a role defined by active participation in the democratic sphere” (6). Foreshadowing current interest in socially engaged artistic practice, Curry’s paintings and his position as artist-in-residence demonstrated that art was an experience available to anyone, and that the University of Wisconsin Rural Art Program, of which Earl Sugden was a part, showed through its classes and community art exhibitions that “self-expression [was] essential to a democratic citizenry” (165).

Cultivating Citizens: The Regionalist Work of Art in the New Deal Era offers readers a new look at Regionalism and the role of pedagogy in American art history. The significance of place is woven throughout the text, specifically vis-à-vis New York City, and the ways in which artists worked within and against systems of the avant-garde is emphasized. Wood in Iowa, Benton in Missouri, and Curry in Wisconsin may have been geographically removed from the center of the art world, but the debates that raged in the heartland influenced practices and policies in New York and Washington, DC, and had lasting consequences across the country. These issues still impact universities today, making Cultivating Citizens a must-read for anyone interested in the historical debates that shaped the current state of the arts and humanities. As Kroiz shows, during the 1930s and 1940s, American Regionalism “provoked crucial disagreements over the role art and its study play in democracy,” and these arguments continue to resonate with artists, scholars, and citizens today (15).

About the Author(s): Keri Watson is Assistant Professor of Art History at the University of Central Florida, Orlando