One of the most significant creative moments in the short career of painter David Park (1911–1960) is also its most apocryphal. One afternoon, sometime in early 1950, Park, with the assistance of his wife, Lydia, is said to have loaded up the entirety of his abstract paintings and hurled them unceremoniously into the Berkeley dump. Few episodes in American art history rise to that level of decisiveness, rejection, and finality. It is hard to say if that event, however captivating as it is, actually happened. According to author Nancy Boas in her 2012 publication David Park: A Painters Life, historians are doubtful. Even within the Park household, the ouster seems to have passed by unremarked. But as the new exhibition David Park: A Retrospective makes abundantly clear, the artist’s transition from nonobjective abstraction to the more familiar terrain of representational painting was tellingly abrupt.

Critics, historians, and specialists have mostly broken free of the neat historical contours once deployed to package the story of modern art’s development. The old narratives tend to characterize abstraction as a destination one arrived at, although numerous artists, Piet Mondrian and Willem de Kooning to cite just two, freely moved in both directions simultaneously. Park, it seems, arrived, looked around, and decided the playground was just not for him. In an often-reprinted 1953 statement, Park said of his nonobjective work, “it looked like a hard working guy trying to be important.”

What does not look like the inauthentic, forced efforts of a hard-working guy in this career-spanning exhibition, is practically everything else he painted.

Park was born in Boston to an intellectual and energetic family and was the third of five children. Armed with a precocious gift for drawing, he made the commitment to art as a way of life at an early age. By sixteen, Park had soured on formal education and was exhibiting landscape paintings with the Boston Society of Independent Artists. By seventeen, he was bound for California to live with his aunt Edith Truesdell, and was also a painter.

Following stints at the Otis Art Institute and University of California, Berkeley (UC Berkeley), Park established himself within the Bay area art community, and by 1934, at the age of twenty-three, he had had two solo exhibitions and was teaching drawing and painting at the UC Berkeley Extension school. It i’s during this fertile creative period that Park began to explore the close-cropped compositional structures featuring musicians, revelers, artists, and models that will, with only that brief interlude into nonobjective abstraction, remain at the heart of his practice throughout his career.

As this pleasingly chronological retrospective demonstrates, Pablo Picasso (Spanish, 1881–1973) served as the painter’s guiding light during these early years. The characters that populate paintings such as Dancing Couples (1937; Collection of Nancy and Sidney Unobskey) and Four People Drinking a Toast (1937; Collection of Veronica Pastel Egelston) have a weight and solidity that recall the European master’s proto-Cubist works. Unlike Picasso’s work from that period, the expressions on Park’s figures’ faces, while occasionally static, never appear mask-like. Park’s characters never lose the sense that they are real people connected to the real world. Even the performers in the 1939 Violin and Cello (San Fransisco Museum of Modern Art), which are among the most condensed and Picasso-like of Park’s early works, feature intense, veracious expressions despite flat color and crisp contours.

By, the mid-1940s, after a four-year teaching sojourn back east, Park is back in Berkeley boldly experimenting with the thick impasto surfaces that will soon become his stylistic calling-card. In Self-Portrait (1946; Collection of Michael Hackett-Hale), Park has reduced his compositional complexity to little more than two densely brushed, interlocking planes of sizzling red and earthy taupe. The resulting profile is unmistakably Park, and through the spare, spatially-compressed simplicity of the painting, the transition to nonobjective abstraction is developmentally close at hand.

The abstract period, from around 1947 to about 1950, is in a sense Park’s most mysterious, for little work still exists. Now teaching at the California School of Fine Arts alongside the domineering Clyfford Still, Park would have found the lure of nonobjective abstraction, even if not a natural fit for his creative temperament, impossible to resist. The exhibition displays three such untitled works, all from 1948. They feature the same assertive use of color and straight-from-the-gut gestures as Park’s best-known paintings, although by comparison, they seem lifeless. Even to an untutored eye, the paintings’ hard edges and airtight color compartments strain to evince the joy that so freely animates his figurative work. For the artist, this must have been doubly obvious. 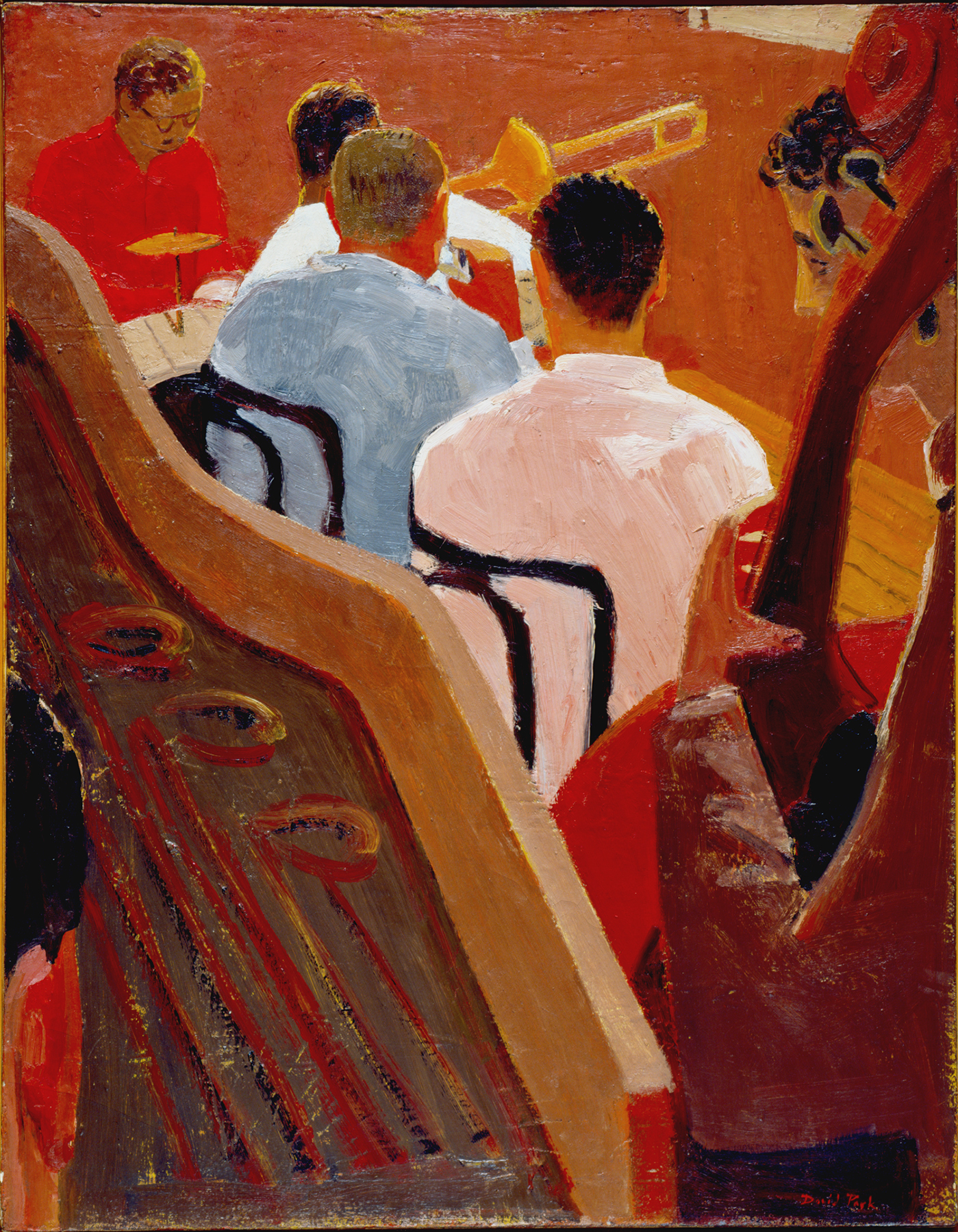 It is often said that the formal and technical inventiveness of Park’s work, and indeed, what is characteristic of Bay Area figuration in general, lies in the lessons of Abstraction Expressionism applied to representational subject matter. But the visual record does not quite bear this out. The thick, bravura application; heaving, painterly gestures; and the libertine slurring of paint into paint are still a few years away. In fact, the earliest of Park’s post-abstract works on display, The Rehearsal (fig. 1), has more in common formally with his creative output of the early to mid-1940s.

An iconoclastic painting, the red-orange of The Rehearsal is assertively representational and so unlike the approved “house-style” of nonobjective abstraction that it was initially considered by Park’s peers to be a joke. The painting is also a case study in what makes the painter’s work from the period so exhilarating. Featuring the players of the Studio 13 JazzBand in a tight-knit space that recalls Degas’s images of the opera as seen from the orchestra pit, the painting pulses with rhythmic, alternating brushstrokes in analogous hues, deftly describing light and form with the minimum means necessary.

Park is a master of this sort of abbreviation. Throughout the mid-1950s, it is the economy of his brush, rather than its gestural freedom and spontaneity, that is his real achievement. Park’s ability to make the viewer believe that he is gazing upon a bowl of fruit, or a cup and kettle suspended in the act of pouring, instead of just a few strokes of thickly applied paint, is unsurpassed. What follows over the course of the next few years is Park’s quest to become eminently himself. Paintings such as Table With Fruit (1951; The Walecka Family), The Bus (1952; Private collection), and The Tournament (1953; Oakland Museum of California) fully embrace life, people, moments, and memories that are writ large in blue-green and orange-red.

By the late 1950s, the tide has broken in Park’s favor. Joined by friends and painters Elmer Bischoff and Richard Diebenkorn, figurative painting is no longer seen as a comical retreat or failure of nerve, but instead, as its own kind of revolutionary act. And oddly, this is where the trouble begins.

There is a moment, beginning sometime in 1958, near the end of the exhibition, where everything becomes almost too much: too much paint, too much speed, too much abstraction. Economy and restraint are given over to surplus. As the paint grows ever thicker and the handling progressively looser, the figures in works such as Couple in a Landscape (1959; The Ronald Constine Family) and Untitled (Berkeley Figures) (1959; Gretchen and John Bergguen) are more generalized, and they register as frankly generic. Conjured from viscous blobs of rapidly brushed linseed oil and pigment, they are no longer depictions of real people captured in quiet, humble moments; instead, they are “David Parks.”

That is not to suggest that this approach eschews the prospect of success. The eerie, yellow-skied Four Women (1959; Stanford University) is a Demoiselles d’Avignon-inspired masterpiece of twentieth-century American painting. But, in terms of his later work, it is an outlier. Maybe it was the necessity of filling an upcoming show at Staempfli Gallery, or maybe it was the chronic pain that prevented him from working for long periods at a time. No matter the cause, as excess becomes one of the defining characteristics of the work, the humane quality that so animates his early 1950s canvases slowly departs.

The tragedy of David Park’s terminal cancer diagnosis, necessitating numerous surgeries and causing him to be bedridden for his last few months, is offset somewhat by a last creative efflorescence. The painter, unable to move unassisted, spent his remaining days in 1960 producing a remarkable body of works on paper. The themes that so energized Park’s lifework are recapitulated in these wonderfully delicate yet luminous gouaches: musicians, bathers, mothers with children. On full display in these small works is Park’s quintessential touch, his sense of frugality, and the power that brevity conveys, unencumbered by the materiality of oil paint. In a quiet way, these modestly sized gouaches constitute the most personal encounter with the artist and are a highlight of the exhibition.

David Park’s legacy has been obscured in the decades since his death. The current traveling exhibition is the first large-scale display of his work in over thirty years, and there is still no catalogue raisonné for his oeuvre. In recent years, a critical reevaluation of the work of Park’s dear friend and colleague Richard Diebenkorn (American, 1922–1993), accompanied by numerous exhibitions, has elevated his stature among artists and historians alike. One can only hope that this will be the case with David Park. What Park’s career lacks in longevity, it more than recompenses in authenticity and force of expression; these are two qualities that are sadly not in excess in today’s market-driven art world.

About the Author(s): Alan Pocaro is Associate Professor of Art at Eastern Illinois University