The soundscape outside my pad is a collage of anxiety. Endless sideshows and doughnuts swirl up the intersections that hem the lake. A young (maybe?) man periodically shrieks to himself, or to him’s other self / shadow lover / past aggressor / omnipotent aggressor. A carload of loaded young men glide through the space of streets, wordlessly hollering along with a ’90s pop song. Someone flushes gravel down an amplified toilet, setting off every car alarm on the entire block, or perhaps it’s just another motorcycle going by. Across the lake, a friend who lives downtown has had enough of the bullets lodged in even those upscale walls . . .

liquidated the condo and the vacation house and poured them into the burbs down South . . .

The sounds of Jonathan Coleclough1 almost counteracting it all. A Steadiness veil filtering the noise.

If you begin to feel overload, consider your Earth, what it feels.

The soundscape inside my head, Monday, 3AM: “One of the primary ways in which we colonizers have defined and identified the places in which we live—in Oregon, in Washington, in California—as luscious and verdant are wrong and harmful. If we are to listen to the plants as intelligences speaking to us . . . we already raised their numbers and voices to the level of a cacophony . . . and we still couldn’t hear. We thought it was paradise.”

If the only constant in the universe is change, and we are to live in concert with it, then the only lifestyle that makes any sense at all to me is to some degree nomadic. You can’t control-burn 12.5 million acres of California annually (a pre-colonial high-end estimate3) and expect indoor toilets everywhere. Look around the room. Decide what is important to you. Reduce that by half. Assume you have to carry it to the winter place yourself, along with your home.

More from 3AM: “You know how it is when you get an earworm? A phrase of music gets in there and loops and loops away. This is a cognitive feedback structure. It makes a difference what you put in there and how well you understand interrupting and adjusting those loops. But it is also how reality works: whatever you engage in on a daily basis, whatever you consider normal, THAT is getting reinforced (played over and over) and expressed (getting fed into others’ looping cognitive structures). So we ought to be careful with all of our words and deeds. (What I personally think about on a regular basis: Feedback structures! Looping loops!)”

We all, I’m thinking, have a little homework to do. Most of us (or, many many of us, globally), have been born and raised within an anthropocentric and generally settler-colonial framework; really, even if you’re only seven years old, that’s seven years of human-centeredness baked in. There is nothing else. Until there is (with Covid). GLOBALLY, we gauge and mark our experience of time based on the Greenwich Mean, until time comes to a grinding halt, teeters for a few months, and then just cascades out of control. 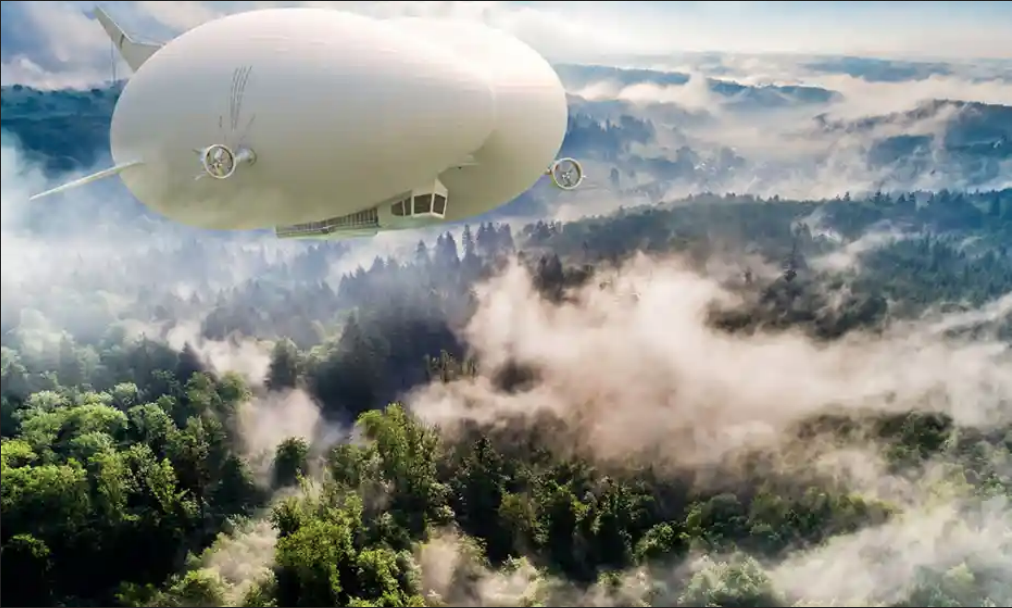 The dreamlike Airlander-104 will be the site for my postpandemic performance (fig. 1). The hybrid airship’s gigantic, white, butt-molar-shaped “envelope” (technical blimp terminology; i.e., “gasbag”) is practically screaming Project Onto Me. On your deliberately slow journey—taking off and landing wherever there’s even ground—you’ll lie back on the haptic floor of the ninety-person gondola, sipping an Aviation (absinthe cocktail). My team and I will be filling the massive space with sublime light and noise . . .

I stitch the future with clues.

By following the clues I invoke the future that is my birthright, and it appears to me, it’s shown to me, introduces itself to me, as I become fluent in its language. My language. My pursuit of this is ritual, against wicked forces and the filthy fucks in fantasyland, in fortification of my own freedom from fear.

You have your own keys, your own language. Stop listening to anything else. Follow the clues, and be grateful every instant these angels show themselves.

Look around the room. Decide what is important to you. Reduce that by half. Assume you have to carry it to the winter place yourself, along with your home. This line comes back to me often, now.

In late September 2021, twelve months after I wrote the piece above, my apartment/art studio of seven years became unlivable due to a toxic-mold infestation. I was forced to abandon it along with most of my belongings, since mycotoxins can survive cooking, freezing, digestion; anything porous would infest a new environment. On the autumn equinox, I found myself turning around in there, trying to determine what I could take that might not make me sick, reducing that to the most essential items, packing them into my Subaru, and returning to an artist residency I had recently finished one hour north. The generous owner had offered to house me temporarily. On the vernal equinox, I’ll have been here six months, and I’ll have walked this planet for fifty years.

Had my writing enacted my vision of nomadism? From one point of view, the equivocal boundary between my body and my environment may have been breached by the mycotoxins, by the fungal body, influencing my system and therefore my thinking, my words. Cognitive science and quantum physics alike tell us that our observations alone influence the processes occurring around us; that we, ourselves, are processes nested within them, and nest others within us, intermingling with them and influencing them, and being influenced just as much.

I stitch the future with clues.

I write the future (and so do you). I’ve proven this to myself often enough that I now know how important it is to be careful about what I write, and say. I’m world-building in every moment. These words I type now are contagious, are seeds, like the brilliant, resilient mycotoxins that permeated my body and books (my books! GAH. Into the landfill).

Curators Jessica Cooley and Ann Fox invited me to participate in Indisposable: Structures of Support after the ADA,5 to be mounted at the Ford Foundation Gallery from June through September 2020. Adjusting with the pandemic, the exhibition team at Ford collaborated with Cooley and Fox to create an online component, commissioning a new piece from me that became my current film, Stitching the Future with Clues.6 Completing the piece while conceding to nomadism brought my work to a next level, ushering in a new fluency in my own language and bringing together exactly the creative band I imagined performing with on the Airlander-10. Like those fungal intelligences, I realized: every moment holds instructions, and obstacles, and opportunities to hack those obstacles, to turn the conversation sideways.

PDF: Holt, More from 3AM

About the Author(s): Allison Leigh Holt is a multimedia artist / guerrilla scholar.