In January 2020, we agreed to collaborate with the Ford Foundation Gallery to cocurate an exhibition celebrating the thirtieth anniversary of the Americans with Disabilities Act (ADA). By early March, what was supposed to be a summer show had evaporated in the face of pandemic lockdown. From this sudden pivot emerged an almost three-year curatorial project entitled Indisposable: Structures of Support after the ADA. The organizing principle of this reconceptualized exhibition addressed:

how the support structures for life (health insurance, housing, food security, and education) are insecure at best for far too many people. COVID-19 and the continuing effects of white supremacy expose an ideological landscape where some lives, particularly those lived at the intersection of disability, queer, and BIPOC communities, are deemed disposable. . . . Indisposable prompts us to rethink, in exciting and inclusive ways, how human value is constructed in order to explore the life-sustaining practices emerging from embodiments often deemed disposable.1

Over eight “chapters”—Zoom events featuring new commissions—the artists premiered their work, presenting it in conversation with friends and colleagues.2 Our curatorial methods undertook a radical shift to match the crip time of COVID-19, when everything was immediately slowed by the upheaval caused by lockdown and social distancing.3 We were led by what the artists imagined the show concept meant to them during the pandemic but also by the material, emotional, and physical needs of the exhibition artists. What emerged was a body of work that unspooled threads of discussion centered around care and grief.4 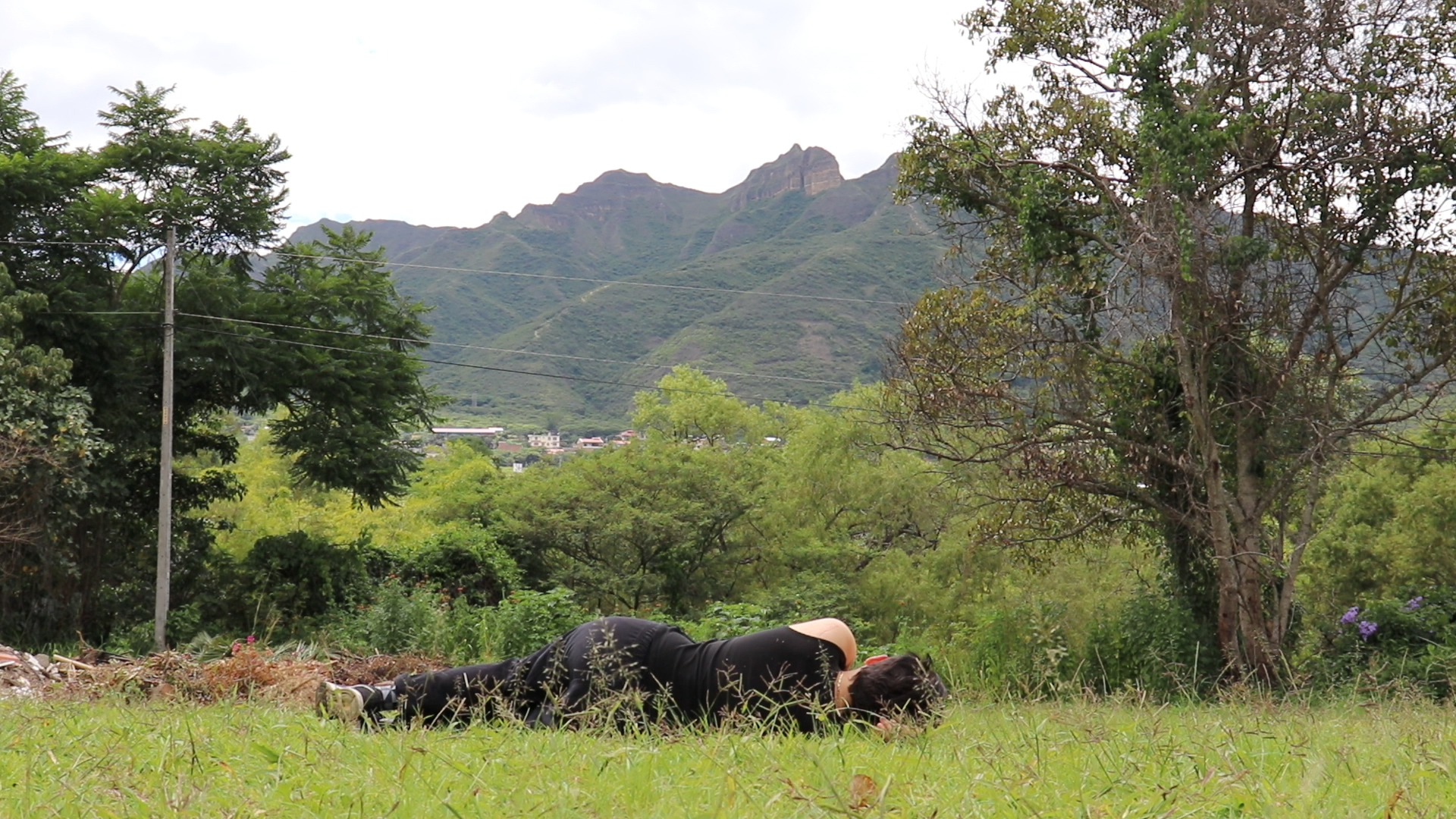 For this Colloquium, we invited a selection of the artists, scholars, and poets who participated in the online chapters of Indisposable to contribute pieces that respond to—in the broadest possible terms—the intersections and entanglements of disability/crip art (understood as intersectionally constitutive with race, gender, sexuality, and disability) and “America.” What emerged from these brilliant submissions traces a variety of responses to “indisposability” as a means to confront the politics of living, art making, and surviving in the United States.

Readers will note that not all the works included in this Colloquium overtly discuss disability or the field of art history. Instead, it is our intent to feature artists and scholars who make their life-sustaining structures of support and insistence on their indisposability an art practice. Through engaging the idea of indisposability, these contributions are catalyzed by ideas that intertwine with crip politics and disability aesthetics. Fundamental to each is decentering what we define as normal—both as an act of resistance to the ideology of normalcy but also, ultimately, as a way to prioritize principles centered on disability justice that privilege the generative and sustaining knowledge of queer, crip, BIPOC folks.5 Such a centering demands a reckoning with the tyranny of normalcy that courses through the founding settler colonialism of the United States, one that continues to be maintained by the entwining oppressive forces of ableism, racism, and heteropatriarchal capitalism. For example, the queer, crip, Puerto Rican artist Kevin Quiles Bonilla uses the imagery of piles to represent the liminal space of identity in a world that wants to create neat taxonomies of being, doing, and existing: “You’re an entity that doesn’t complete; you’re an entity that isn’t concrete. You’re a being of the in-between, and you will adjust to this belief.” But as the emblem poem within the body of his text suggests, piles can pile up, can ascend and aggregate into the visible invisible, as they “resist extinction and continue to reappear, demanding concrete ground.” The ostensible detritus of the pile becomes a jagged, ever-ascending, ever-self-sustaining answer to the uniform banality and ultimate instability of the perfectly ordered stack.

Heather Lynn Johnson likewise insists on rendering visible the ways in which such “normalcy” has been historically premised on white supremacy and its deployment of racism and ableism to foully haul each other’s beneficiaries up by dragging its victims down. Her poem “Mississippi Appendectomy” recounts the forced sterilization of renowned Civil Rights activist Fannie Lou Hamer and becomes a powerful roar of grief and protest: “Instead of babies / I birthed / My anger / Half carried and half dragged / My body.” In Johnson’s telling, “1961 becomes now,” with Hamer’s fight for voting rights and against the erasure of Black bodies and voices remaining urgent in our own moment.

All visibility, however, is not created equal. How can we make the disposability of some bodies visible without reinscribing old biases through outdated tropes that ultimately create hierarchies of oppression? Pamela Sneed’s poem “Bruised” explores the evolving symbolic significance of the lead character of the 2020 film Bruised, Ultimate Fighting Championship martial artist Jackie Justice, played by Halle Berry. For Sneed, Berry’s character is, in one sense, a fitting metaphor for justice in America: “Justice has abandoned her children / Justice is down and out / Justice has been assaulted / Justice has been robbed.” Yet Sneed’s poem also explores a brutal kind of disposability at play in Bruised: the appropriation of Black, queer, working-class, and disabled identities for a film about which “even the white reviewers . . . are shocked by the stereotypes and utter debasement.” The tension of this dilemma coalesces for Sneed in the final moment of the film where Justice and her son both find their voices—but is it at the cost of reinscribing ableism and colorism?

As we fully acknowledge the costs of ableism and normalcy, there must be space for grief beyond simply pathologizing it as a disorder in the Diagnostic and Statistical Manual of Mental Disorders (DSM-5).6 Indira Allegra reminds us that “no life is disposable, which means that all losses deserve to be mourned.” This is their reason for creating Texere, an online space for collective mourning that draws on the millennia-old art of weaving. There, grief and vulnerability are witnessed, honored, and intertwined with the losses of others. Weaving becomes an expression of, and metaphor for, collective loss, creating what Allegra calls “grief equity.” For Jill H. Casid, the melancholy emergent from pandemic losses “holds us fast in a refusal to accede to a new normal that accepts death and disposability as necessary and inevitable.” Casid insists that melancholy and grief are also a praxis for “rage-grief resistance,” which summons the rallying cry for an “activist wake” that holds onto our dead in a refusal to move on from the twin pandemics of HIV/AIDS and COVID-19.

If we are all to flourish, we must center crip knowledge to reshape and reimagine the future. Allison Leigh Holt does so by detailing (and embodying in her writing) the nomadic process that emerged as she created the film Stitching the Future with Clues. She recounts being displaced from her home in the middle of the COVID-19 pandemic because of toxic mold and wildfires. Her imaginative memoir/manifesto loops from a reflective statement into speculating a future in which we all, by necessity, will have to engage with and respond to the environments within which we are enmeshed. The entanglement of environmental crises with the pandemics of the present and the future will require many tactics, including the centering of crip methods of care and survival. Alex Dolores Salerno and Ellen Samuels offer some of these vital tactics born of crip knowledge. Salerno makes it clear: “From cultural institutions to the virtual realm, to our homes, and our beds, disabled artists are challenging the capitalist notion that our only option is to be independent and self-sufficient.” Instead, the principles of access intimacy guide a redefinition of joyful care, which Salerno describes as “access magic.”7 What Salerno claims for disabled artists, Samuels envisions on a societal scale, a future where crips survive and flourish but also where those who did not survive remain with us. Here, Samuels insists on the flourishing of crip futures while also echoing Casid’s call to carry and to hold “our dead with us into the battles we must still wage in their names.” Samuels defines this existence as “slow futurity,” a place of tensions and paradox. How can one insist on futurity while acknowledging the realities of brokenness and loss in ways that are not simply ableist? Samuels offers the space of “lyric theory,” where the testimony of the self creatively meets the articulation of the political, as a tactic.

And with something of a rallying cry, we assert that in order for the field of crip art history and visual culture to move forward, we can no longer spend our time continuously explaining how we got here, what it means, or how to do it. In our current moment, when pandemic and police violence disavow crip life itself, we no longer have time to explain why disability is not a tragic medical condition; why disability, race, sexuality, and gender are always already entwined; why crip politics are required for all social-justice work; or why crip art is a critical component of art-historical analysis and theory. That work has already been done. We are now forging ahead and welcoming you to join the conversation as though you have been here with us the entire time. This Colloquium sets new stakes that move the field forward and invite readers to think beyond biographical representation, because representation, especially at the cost of real structural change, is the least we can do. Crip art arrived a long time ago and has been with us for as long as we have survived. And endure and flourish it must, and it will. We see crip art as an expansive arena in which you can participate even if you are not a trained art historian or even if you are not writing in the mode of art criticism. Crip art is profoundly intersectional and polyvocal, as we hope the wide range of participants in this Colloquium illustrates; expertise does not come from learned canons but from ourselves. Crip art is more about a political orientation than it is about defining the parameters of a specific genre. Welcome to the new crip art; we’re glad you’re here.

About the Author(s): Jessica A. Cooley is Guest Curator at the Ford Foundation Gallery. Ann M. Fox is Professor of English at Davidson College.