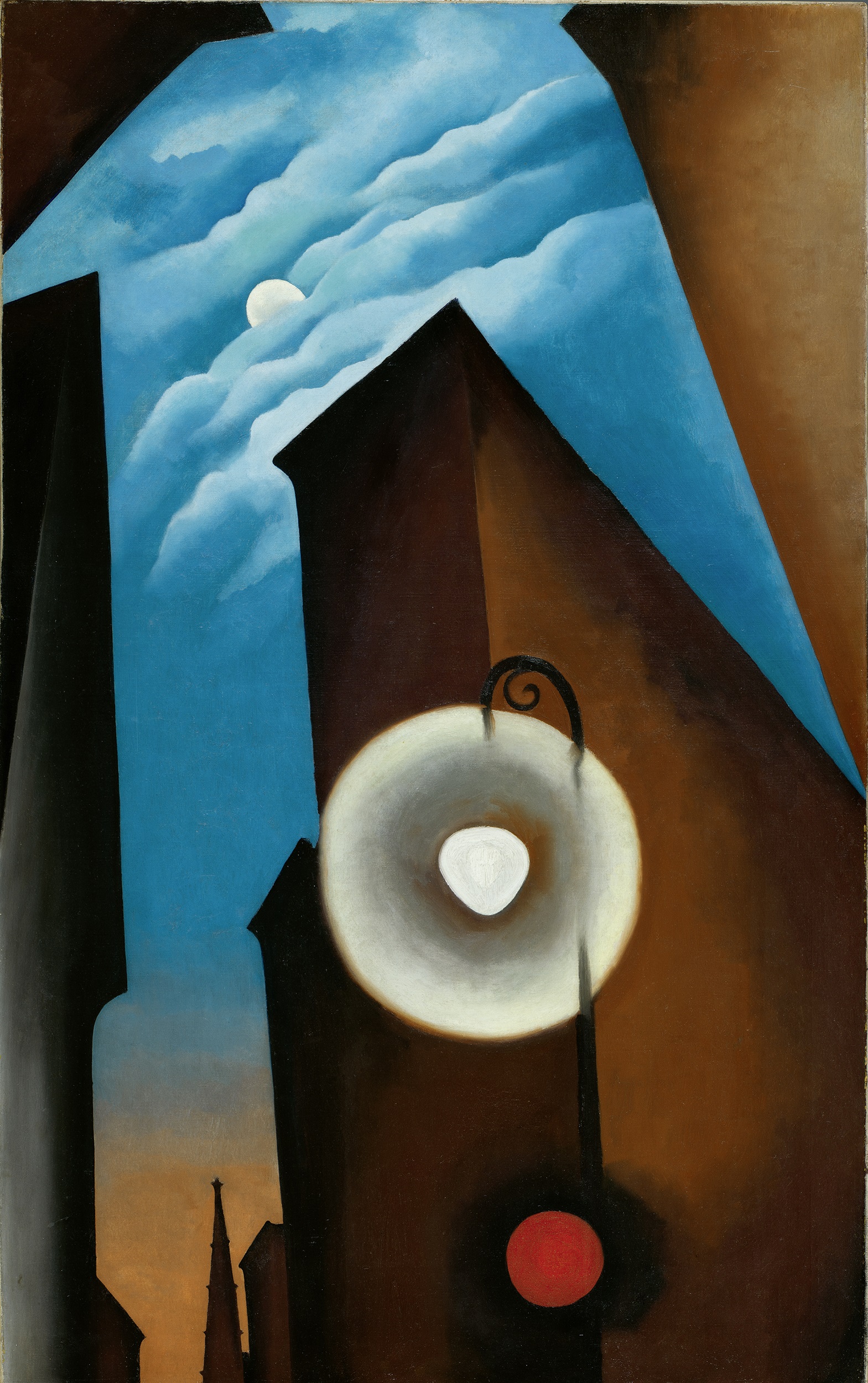 Despite the artist’s popularity as an icon of American modernism, the opportunities to see the work of Georgia O’Keeffe (1887–1986) on the other side of the Atlantic, in Europe, have been astoundingly limited. During her lifetime, her work, often tied to her dealer and husband Alfred Stieglitz’s galleries, An American Place and Gallery 291 in New York, rarely appeared in Europe (fig. 1). Indeed, the first solo show dedicated to O’Keeffe did not take place until 1993 at the Hayward Gallery in London; it was curated by Charles C. Eldredge, an American art historian and former director of the National Museum of American Art (now the Smithsonian American Art Museum). Thanks to an unparalleled collaboration between the Georgia O’Keeffe Museum in Santa Fe, New Mexico, and three major European institutions in Basel, Madrid, and Paris, her work has recently been presented to new audiences. The exhibition highlights the importance of international collaboration and good-faith agreements in showcasing American art outside of the United States. The Thyssen-Bornemisza Museum in Madrid, with five O’Keeffe paintings in its holdings, represents the largest public collection of her oeuvre outside the United States. This distinction led the museum to initiate the 2021 European retrospective. The only previous opportunity to view O’Keeffe’s work in Spain was the 2002 exhibition in Madrid that was presented by the Fundación Juan March. The show featured twenty-four of O’Keeffe’s paintings, marking the first official presentation of the artist’s work in the country. Once again, an American curator, Lisa Messinger, from the Metropolitan Museum of Art, oversaw the selection. For the 2021 touring exhibition, the Thyssen Museum joined forces with the Pompidou Center and the Beyeler Fondation. Together, they displayed approximately seventy paintings and drawings as well as a handful of works that each institution procured independently. Ultimately, the collaboration resulted in three different exhibitions with three distinct catalogues, which emphasize diverse aspects of the American painter’s work. I explore all three exhibition spaces but devote most of my attention to the display at the Thyssen Museum.

Rather than framing O’Keeffe by her relationship with Stieglitz, modernist European photography, and New York City, Spanish art historian Marta Ruiz del Árbol, curator of the exhibition at the Thyssen-Bornemisza Museum, planned an ambitious monographic presentation that focused on the independence of the artist, her interest in traveling, and the relevance of nature in her life and work. The exhibition at the Thyssen Museum laid out ninety works that offered a complete survey of O’Keeffe’s art from her early abstractions of the 1910s to the beautifully simple landscapes inspired by her experience traveling by plane in the late 1960s (fig. 2). 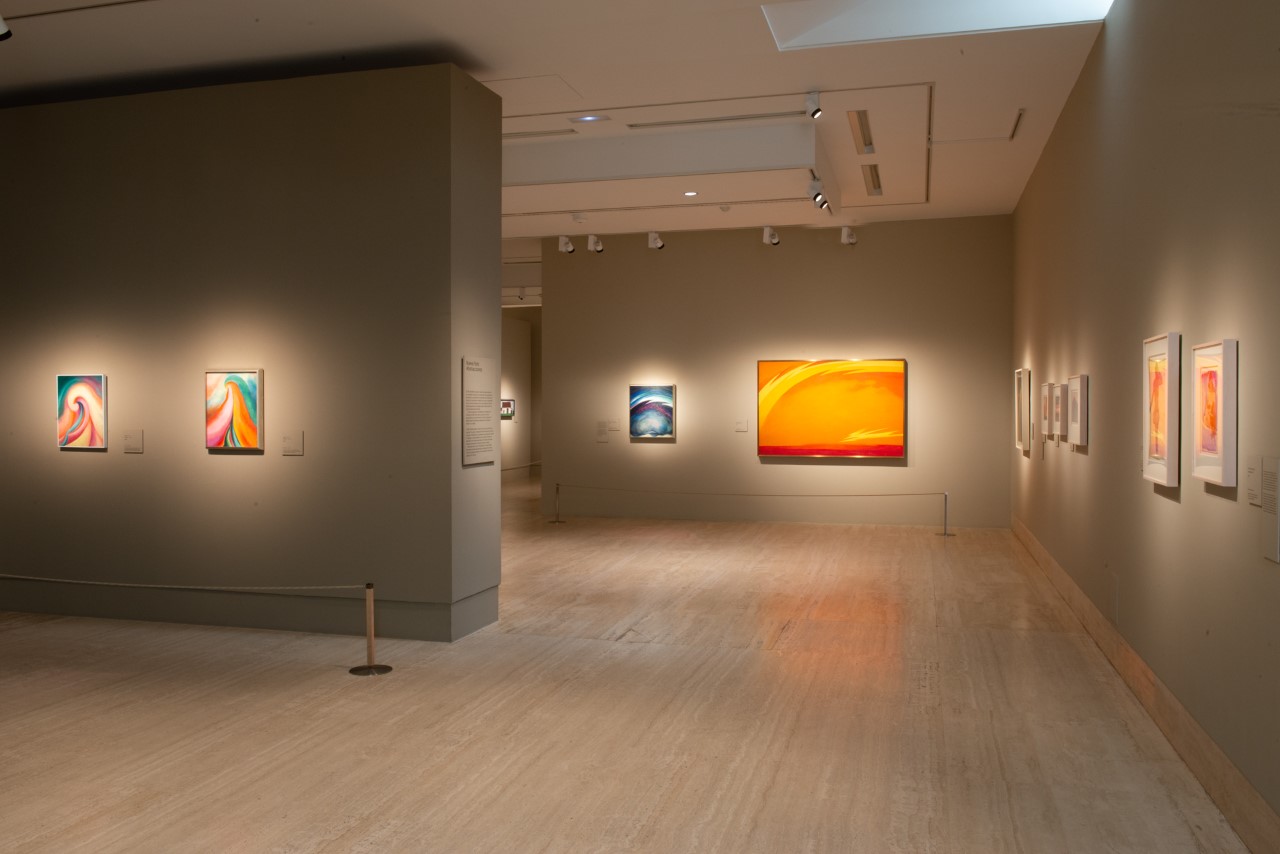 The eight gallery rooms divided the works by theme, place of creation, and subject matter, rather than by chronology. For example, the galleries titled “South Carolina Early Works,” “New York Abstractions,” “Flowers and the Natural World,” and “Exploring New Mexico” evoked specific landscapes of the United States. By emphasizing places and themes, Ruiz del Árbol revealed that O’Keeffe’s paintings make strong statements about the importance of small things, deceased things, and even abandoned things—the objects and spaces so often forsaken as subjects in art history. The exhibition pointed to the unique qualities of each of the landscapes O’Keeffe explored during her long life. York Beach in Maine, Lake George in New York, Palo Duro Canyon in Texas, and Taos in New Mexico were all places that left an impression on O’Keeffe and were incorporated into her paintings after she traversed these spaces on foot. As Ruiz del Árbol remarks, O’Keeffe is “above all, a walking artist,”1 suggesting that it was her walking practice that increased the artist´s awareness of the peculiarities of a given landscape (the rough skin of the hills, the curvy branches of a river, the translucid veins of a leaf’s blade). Paintings like Soft Gray, Alcalde Hill (1929–30), Black Mesa Landscape, New Mexico (1930), and the pieces in the series Black Place (1944–46) showcased these ideas to exhibition visitors. To O’Keeffe, walking could be seen as an obsession—as she herself often described it—or a disciplinary practice that enriched her perceptual awareness and allowed her to penetrate a deeper consciousness; walking has also played this role for many other thinkers, artists, and writers.2 While not addressed in the exhibition, the impact of walking on artists opens larger questions on how landscape has provided a space, particularly for white women, to strive independently while enabling experiences that affect artistic production, as it did for O’Keeffe. Always interested in “whatever was at the other side of the hill”—as her friend Anita Pullitzer put it3—O’Keeffe’s systematic walking helped her to find a rhythm that she could translate into color and form in the studio and that enhanced her way of seeing nature. The Thyssen exhibition succeeded at revealing the role O’Keeffe’s active walking had in her understanding of landscape, allowing her to become a part of it and deviate from the passiveness of mere observation and the traditional representation of nature as a sphere that sits apart from our own reality. Because O’Keeffe´s relation with nature was an active one, her viewing of flowers, shells, and landscapes makes us look actively as well, as she intended.

In addition to the role of walking in O’Keeffe’s artistic production, another remarkable aspect revealed in the Madrid exhibition was the artist´s interest in painting conservation. At the end of the show, a video created specifically for this occasion provided an analysis of O’Keeffe’s materials and techniques, including her methods for applying paint and different ways of framing. The video explained her preference for the “wet into dry” technique, which allowed her to juxtapose layers of paint without blending the tones. Further, it explored her interest in the conservation of her paintings (especially after she met restorer Caroline Keck during her 1946 retrospective at the Museum of Modern Art in New York). To protect her paintings as much as she could, O’Keeffe designed many of her own frames. The exhibition’s final room displayed some of the materials the artist used in her studio: oils, brushes, and the color cards she meticulously created to catalogue each of the colors she would use in her paintings. Displayed beside these materials were several objects from her New Mexico studio, such as bones and rocks, which served as souvenirs from her walks, and photographs taken from her studio window of the impressive view. This collection informed visitors’ understanding of the relationship between nature and art embedded in O’Keeffe’s studio.

The versatile space at Centre Pompidou, where the exhibition traveled after Madrid, allowed curator and deputy director Didier Ottinger to present a stunning open exhibition design that let the public wander freely among O’Keeffe’s paintings. As part of the show, he dedicated an entire room to kachina dolls, the devotional objects associated with nature and produced by the Hopi Indigenous communities that had long occupied the land that O’Keeffe walked in New Mexico. These fascinating artifacts intrigued O’Keeffe, and they appear in a number of her paintings, such as Paul’s Kachina (1931), Kachina (1938), and Kokopelli (1942). Ottinger intended to contextualize O’Keeffe within the art of her time and therefore opened the exhibition with a room dedicated to Alfred Stieglitz’s Gallery 291 in New York City. Works by Auguste Rodin, Pablo Picasso, Arthur Dove, and Marsden Hartley, among others, were used to introduce what Ottinger calls O’Keeffe’s “dissident modernity.”4 In his catalogue essay, Ottinger argues well for the dialogue between European and American art at the beginning of the twentieth century and Stieglitz’s role in the diffusion of European avant-garde art in New York City. However, the decision to include these male artists’ works in the first retrospective dedicated to O’Keeffe in France may be understood by some as minimizing O’Keeffe’s skills, her importance as a female artist, and the merits of American art more broadly.

The exhibition’s final location, the Fondation Beyeler in Basel, chose the O’Keeffe retrospective to lead their twenty-fifth anniversary celebration. Although O’Keeffe is popular in Spain and France, Switzerland had held the largest previous retrospective in Europe, with an exhibition at Kunsthaus Zürich in 2003 that was curated by the Swiss art critic and curator Bice Curiger. Nonetheless, the inclusion of works from private Swiss collections in the 2022 show, including Leaf Motif, No.1 (1924), introduced visitors to new ideas. More aligned with the Madrid show, curator Theodora Vischer emphasized O’Keeffe’s “distinctive gaze,” including “the way she viewed her surroundings, and the way she translated what she saw into new, previously unseen images of reality.”5 O’Keeffe was presented as a modern pioneer, an artist who transgressed expectations of appropriate subject matter for modern art. In contrast with the Centre Pompidou exhibition, the only work by another artist that was included was a mobile by Alexander Calder (Black Mobile with Hole, 1954). Its presence in the show—majestically placed in the center of a room that showed O’Keeffe’s later, more abstract works—is justified because she owned one of Calder’s mobiles from 1944, and it was one of the few artworks she kept in her home (fig. 3). Such a gesture highlighted her experience and knowledge of other contemporary artists. The paintings, paired with photographs of O’Keeffe, allowed visitors to understand the artist as a strong, independent woman, who, for example, decided to live alone in Santa Fe away from even her husband, a rare decision during the period. 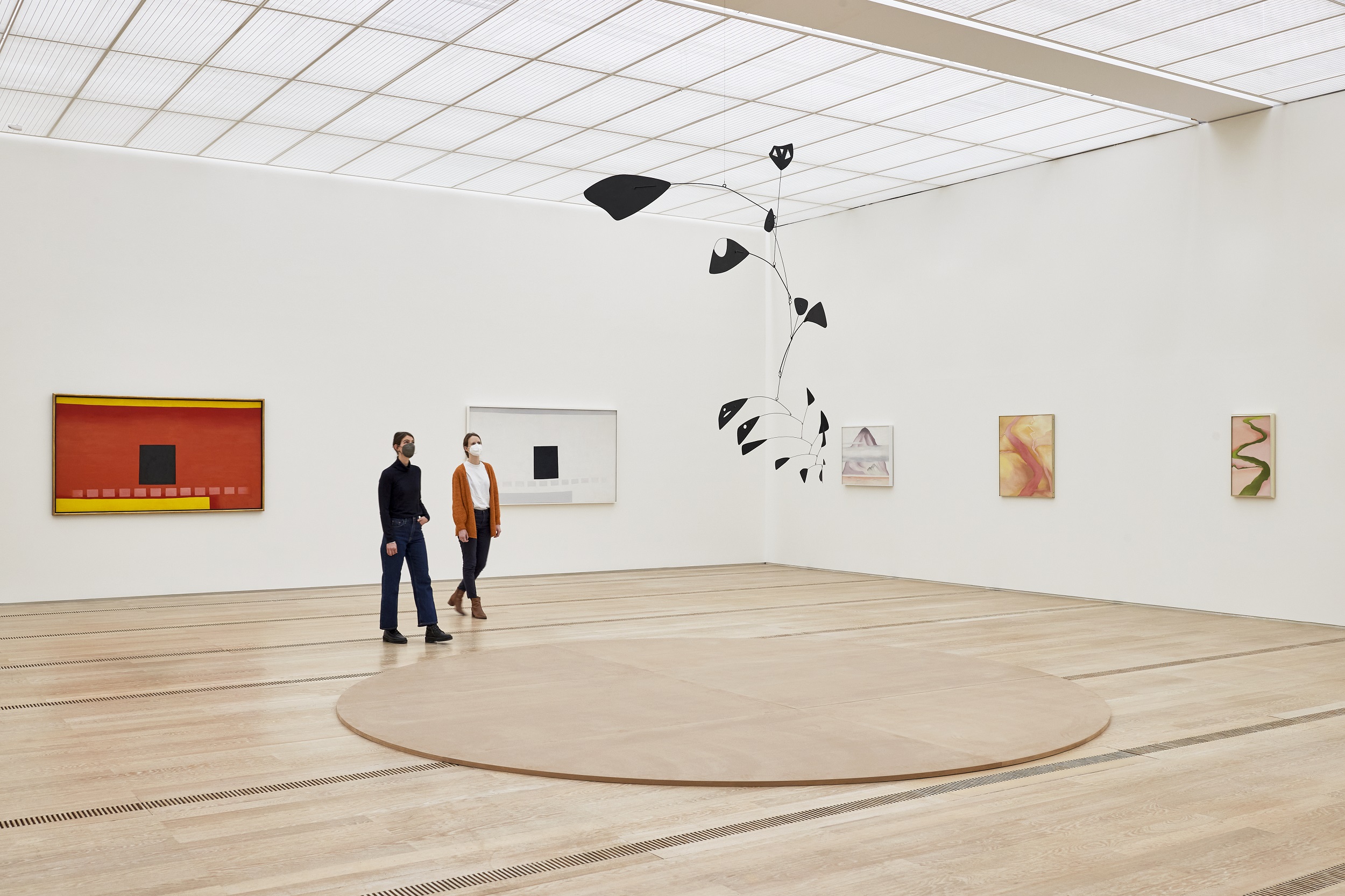 In sum, these exhibitions present to European audiences a multidimensional artist who depicted distinct but equally meaningful versions of different American landscapes. O’Keeffe was clearly aware of art and criticism in both the United States and in Europe, but she remained invested in her own vision. Further, in her careful rendering of flowers and landscapes, her love for nature is apparent. The almost visceral need she had for being outdoors was only matched by her desire to paint. In fact, both impulses were interwoven for O’Keeffe, since the artist went on extraordinarily long walks in the wilderness before capturing the landscape experience on her canvases. These exhibitions underscored to the many visitors seeing her work for the first time in Europe that art and nature were intrinsically linked for O’Keeffe.

About the Author(s): Beatriz Cordero is Assistant Professor in the Art History Department at Saint Louis University, Madrid.