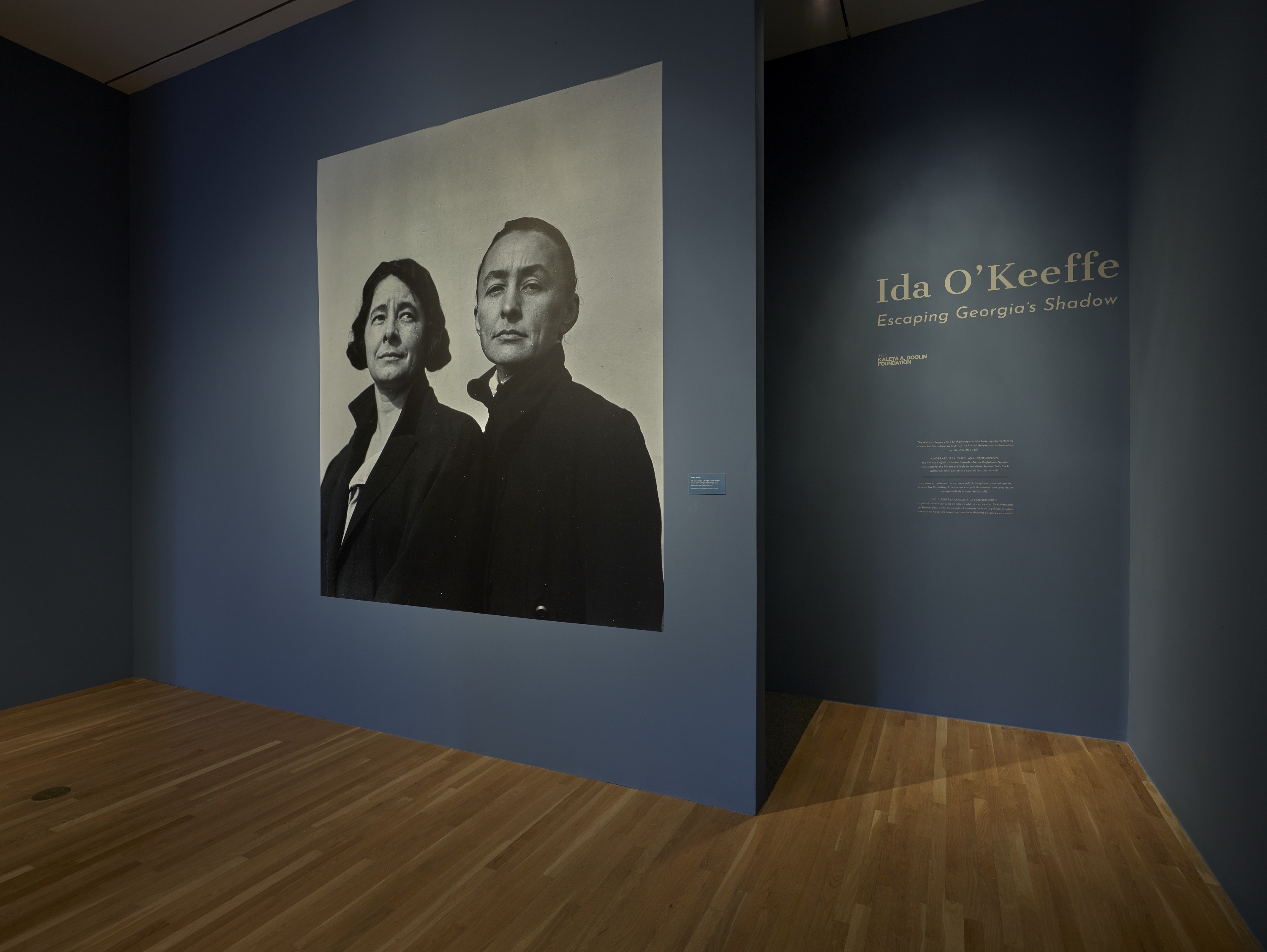 The recent exhibition Ida O’Keeffe: Escaping Georgia’s Shadow offered a revelatory look at artist Ida O’Keeffe (1889–1961). Organized by Sue Canterbury at the Dallas Museum of Art, the exhibition grapples head-on with the challenge of elevating the lesser-known sister of one of America’s most celebrated painters. With a small but carefully researched selection of paintings and works on paper, the exhibition and accompanying catalogue do an outstanding job of establishing the integrity of Ida O’Keeffe’s artistic career, and in their forthright confrontation of Georgia’s celebrity, they lay essential groundwork for future, more nuanced approaches to investigating Ida’s role in American modernism.

At the Dallas Museum of Art, the installation immediately addressed not only the looming shadow of Georgia O’Keeffe (1887–1986), Ida’s older sister, but also the dominant role that photographer and dealer Alfred Stieglitz (1864–1946) played in the lives of both sisters during crucial early years of their careers. Visitors first encountered a large reproduction of Stieglitz’s portrait of the two sisters (fig. 1), followed by a room featuring a short documentary film made for the exhibition that provided the biographical framework for Ida’s story. Visitors then entered a gallery featuring ten photographs by Stieglitz from the 1920s, made during visits by Georgia and Ida to his home in Lake George. These included outdoor portraits of the sisters together, flirtatious and candid images of Ida, and a notorious still life of a feather penetrating an apple, considered a thinly veiled reference by Stieglitz to his desire for Ida.1 The photographs and wall texts in this space illuminated the complex, even erotically charged dynamic between Ida, Georgia, and the much older Stieglitz. In the 1920s, Ida was developing a serious commitment to painting while taking itinerant teaching posts and courses in nursing in New York. Her older sister, Georgia, was by then enjoying success as an established artist in New York and settling into the early years of her long romance with Stieglitz, even as he pursued flirtations with other women, including Ida. Stieglitz’s elegant photographs, presented here as the first works of the installation, define biography as the underlying methodology for the exhibition and related scholarship. 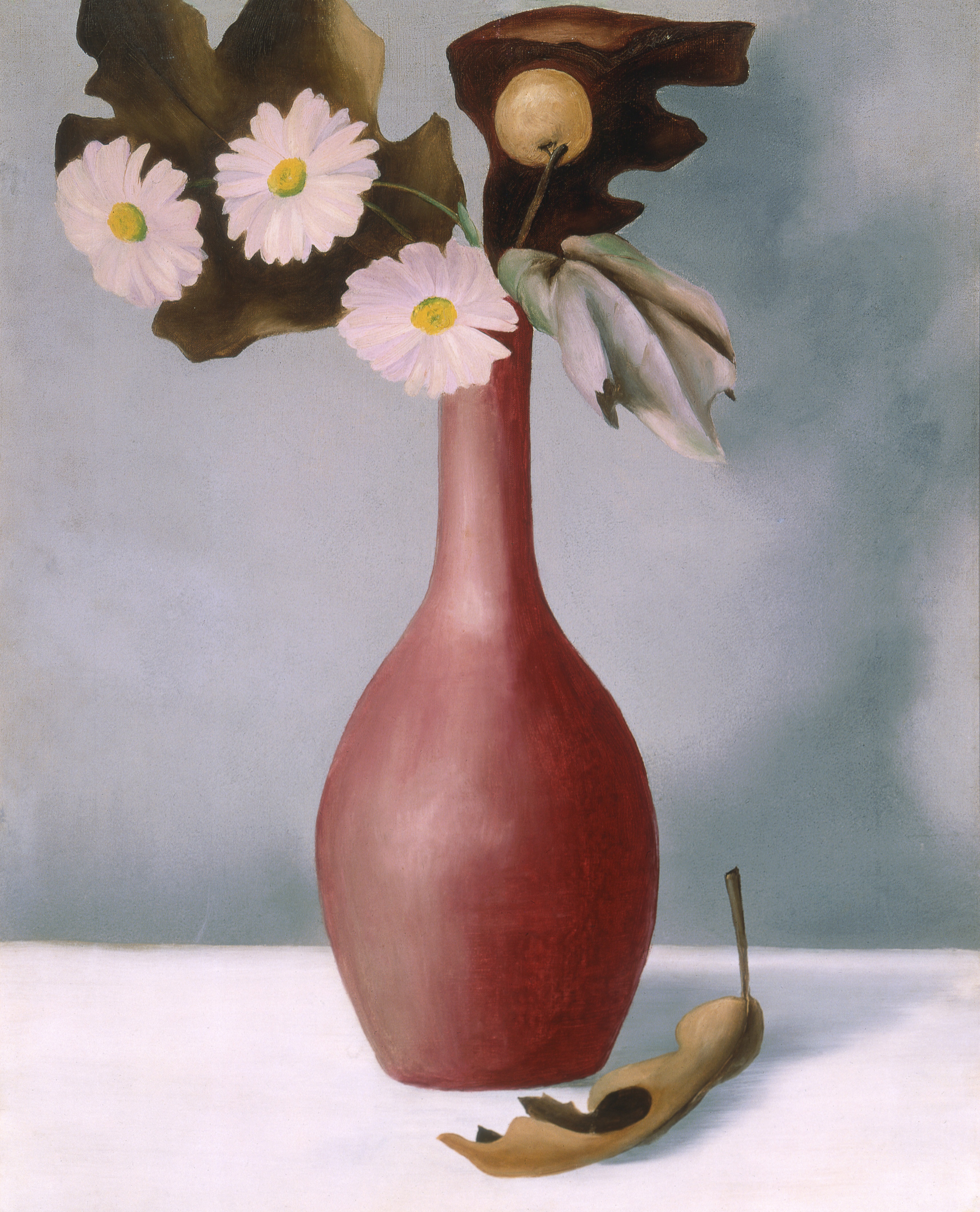 The next galleries featured striking early works, including a potent 1927 still life of flowers and spare geometry (fig. 2), followed by a nearly complete series of paintings of lighthouses, executed during 1931 and 1932, that Ida O’Keeffe exhibited throughout her lifetime. Dedicated fans of Georgia O’Keeffe may be inclined to see her influence in Ida’s work, but Canterbury’s carefully researched chronology of Ida’s career,2 supported by a lovely scrapbook of clippings also included in the exhibition, reveal unexpected reciprocities between the painting subjects and stylistic approaches of the two sisters. The Lighthouse series (figs. 3, 4), in particular, demonstrates Ida O’Keeffe’s sustained interest in an analytical approach to composition and hints at a darker sensibility that feels distinct from her sister’s oeuvre. The exhibition also includes an intriguing selection of monotype prints, several only recently located through dedicated curatorial research. The final galleries feature some compelling late work, including Creation, a dramatic abstraction of color and geometry (fig. 5).

While the emphasis on Ida’s connection to Georgia and Stieglitz throughout the exhibition feels overwhelming at times, it is hard to imagine that Canterbury could have chosen to organize a show of Ida O’Keeffe’s work without addressing this complex and fundamental aspect of the artist’s biography. Canterbury navigates this territory well, and visitors leave the installation with a clear sense of Ida’s commitment to her career and the strength of her aesthetic. There are individual paintings in the exhibition that should now have a more public life on museum walls and in future thematic shows of American modernism. Seeing these paintings in conversation with peers such as Charles Demuth, John Marin, and Oscar Bluemner will continue to enrich how we understand Ida O’Keeffe’s achievements as an artist.

As the exhibition labels and the catalogue essay point out, Ida’s career as an artist faced myriad obstacles typical of her generation—gender discrimination, minimal exhibition opportunities, and itinerant work obligations that left her little time to settle into a sustained studio practice. By virtue of Ida’s personal relationships, however, her career was also shaped by unique circumstances that should provoke new insights into all the characters involved. Canterbury’s deeply researched text reveals that two other O’Keeffe sisters also briefly pursued artistic careers, and each negotiated her relationship with Georgia in different ways. At the end of her catalogue essay, Canterbury explicitly speculates how Ida’s career might have been different had she had “a Stieglitz,” highlighting the lack of his sponsorship as a defining limitation for her art. One is also left wondering how having an older sister embedded in the New York art world provided valuable insights and opportunities for Ida O’Keeffe, in addition to emotional tensions, competition, and ultimately a family rift. The catalogue makes clear that Georgia felt threatened by all her sisters’ successes, even as she gained acclaim in the male-dominated art world of Manhattan. 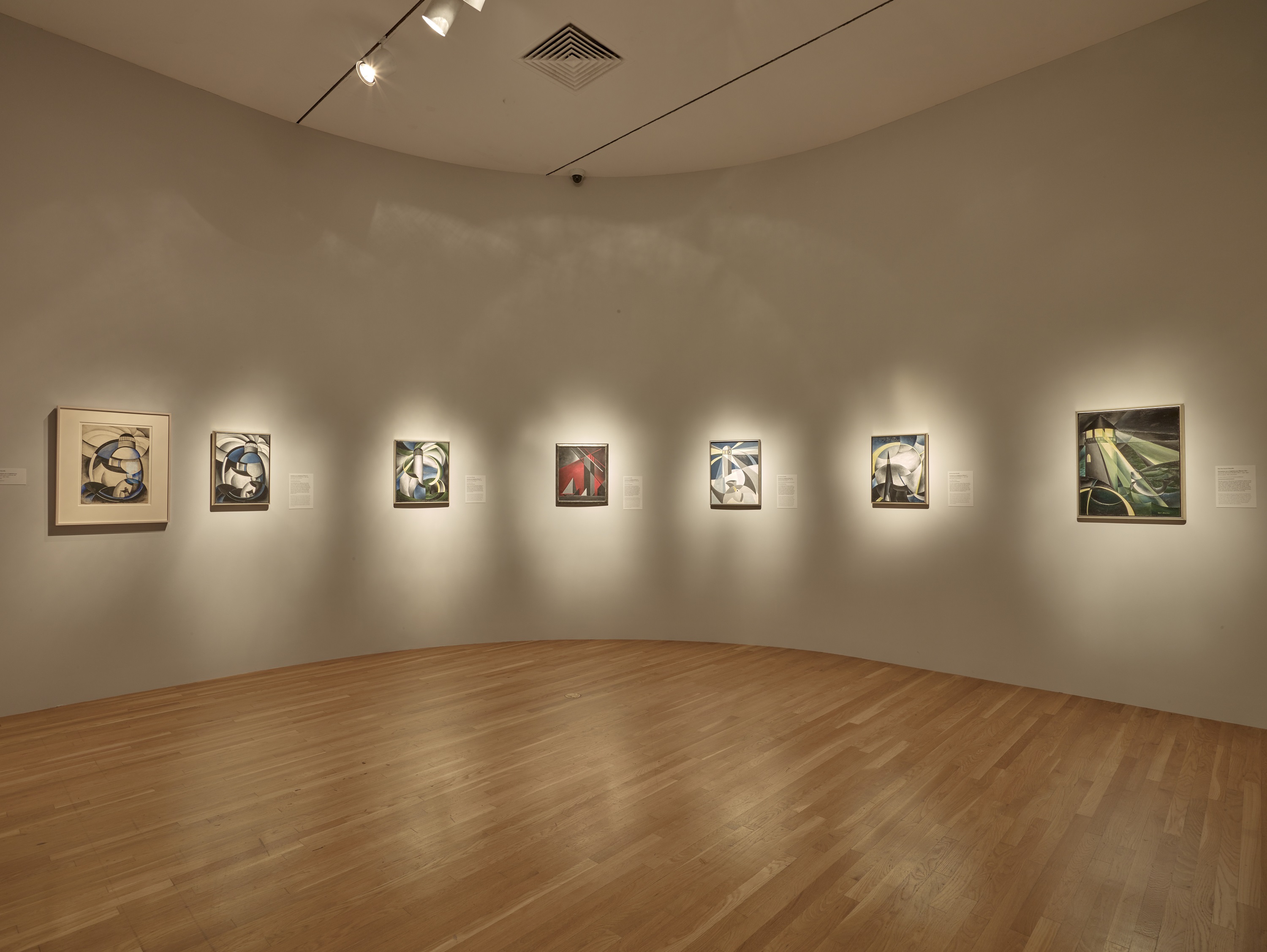 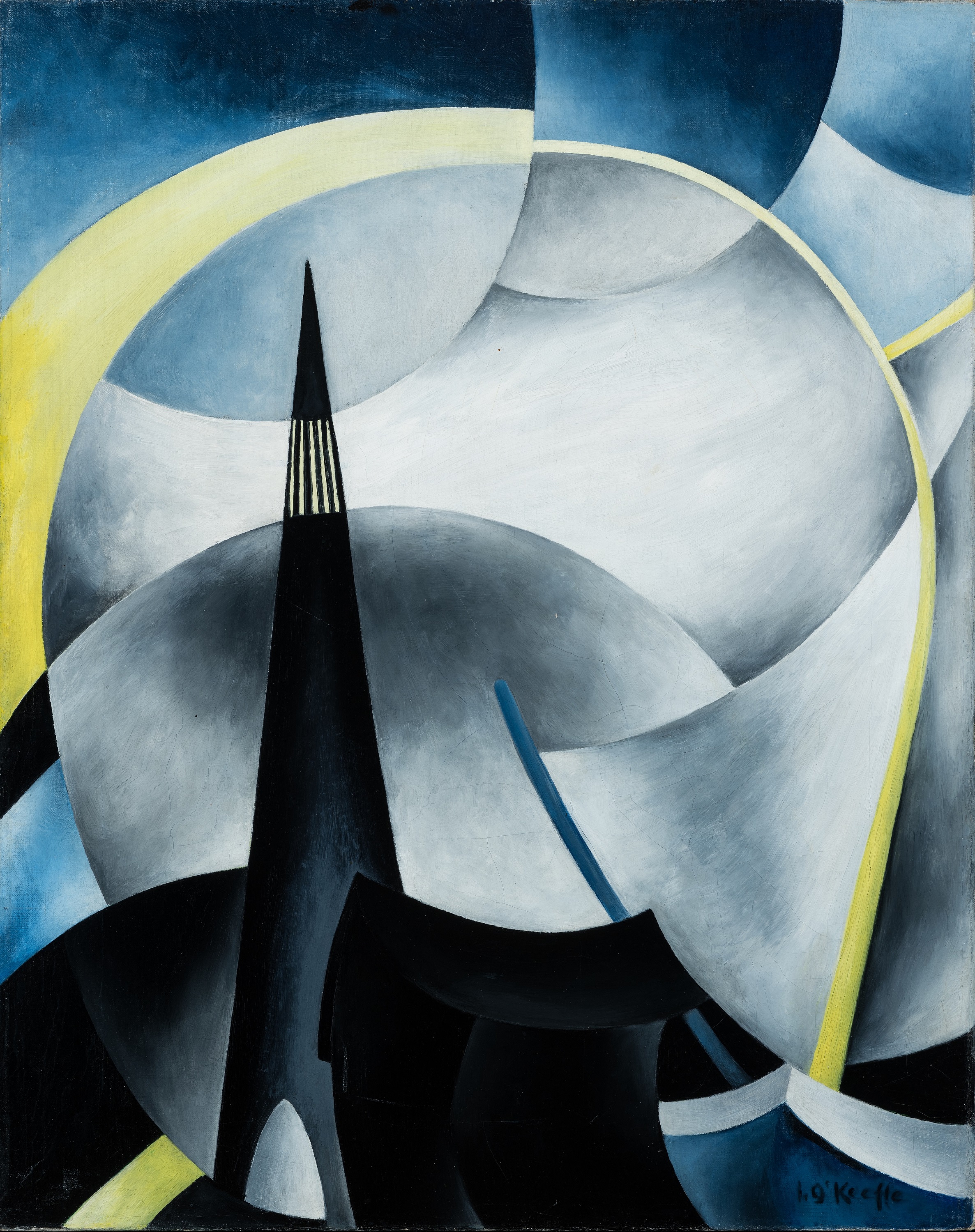 The Norton Museum of Art’s 2016 traveling exhibition, O’Keeffe [Georgia], Stettheimer, Torr, Zorach: Women Modernists in New York, proposed a gender-based look at four leading female artists from the 1920s.3 Ida O’Keeffe’s career further illuminates the array of complex personal and professional tradeoffs women artists of that era had to navigate. The three Stettheimer sisters—all unmarried, but wealthy—might offer a counterpoint for the O’Keeffe sisters. Helen Torr and Marguerite Zorach, each the inevitably lesser-known half of an artist couple, and each living part of her life away from the New York scene, might offer another point of reference for Ida’s career—marriage, children, and geography inevitably affected success in the art world. Ida’s itinerant career, including stints as a muralist and writer as well as a teacher, might also be considered in reference to someone such as Mexican photographer Lola Álvarez Bravo, who took on journalistic work to pay the bills and support a child, while her ex-husband Manuel Álvarez Bravo gained fame as an acclaimed modernist photographer. Recent scholarship on California modernist Agnes Pelton will perhaps provide yet another point of reference for Ida, who, like Pelton, settled on the West Coast after spending time in Manhattan.4 The heterosexual partnerships of the art world have been researched for books and exhibitions, and the marriage of Georgia O’Keeffe and Alfred Stieglitz is among the best known. For many artists, however, connections with siblings and friends were equally career defining, and for women, in particular, these relationships presented competing allegiances as often as they offered support.

After decades of caring for ailing parents and younger siblings, teaching jobs, and nursing coursework, Ida O’Keeffe focused on her love of art and sought to build a life around that vocation. Despite frequent sojourns away from Manhattan for temporary academic posts, her work was featured in solo gallery exhibitions, received favorable reviews, and garnered a mural commission for her from the New York Public Library. Her early achievements also prompted inevitable comparisons with the other O’Keeffe painter in New York. Inspired perhaps by Georgia’s growing success, and initially welcomed into her older sister’s creative community, Ida ultimately found herself tangled in a fragile power dynamic even Georgia struggled to navigate. Ida never gave up painting and exhibiting her art, but personal conflicts and practical obligations forced her to abandon the supportive network of the Stieglitz Circle and its potentially transformative role in her career. 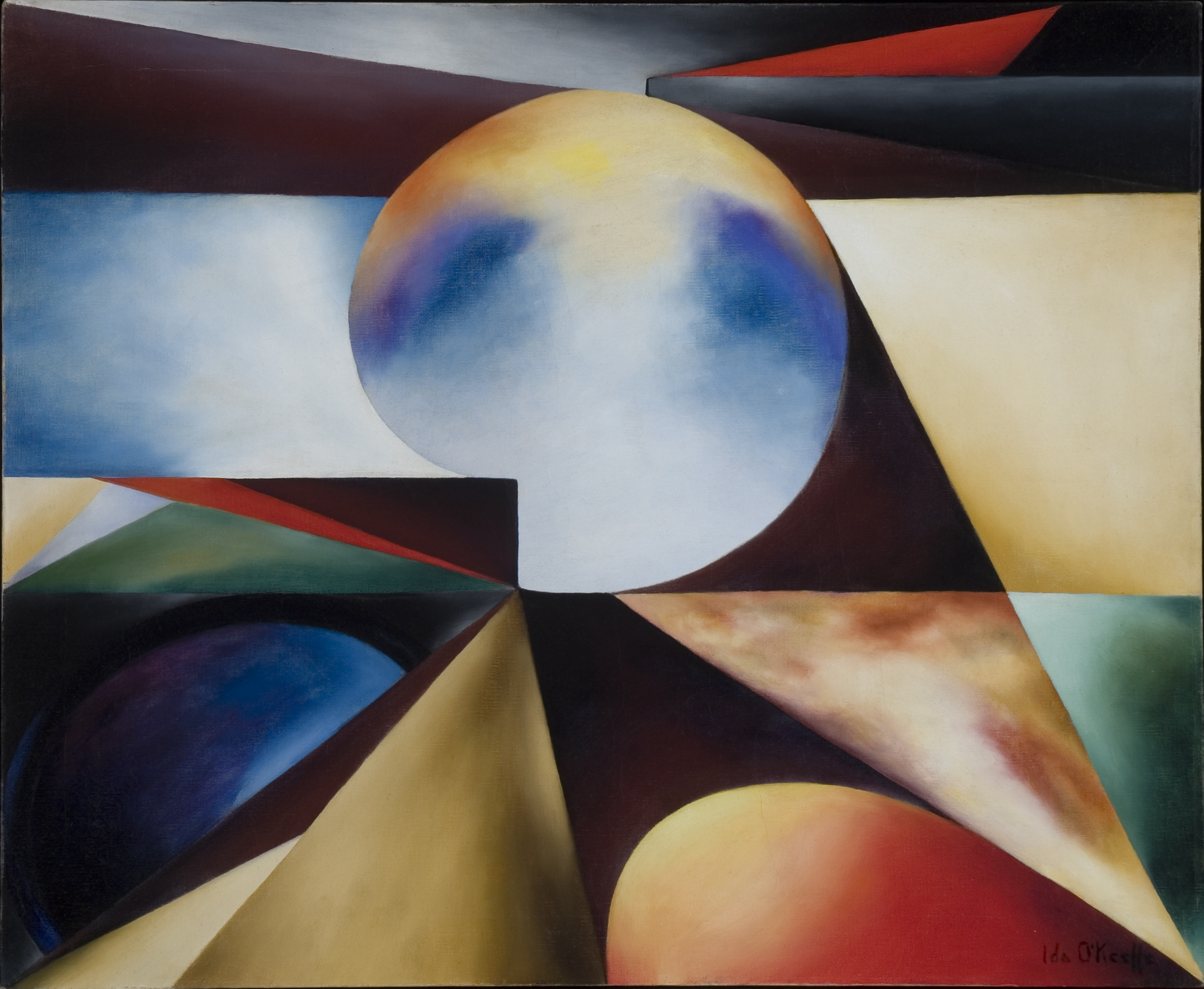 It is fair to say that even scholars of Georgia O’Keeffe’s work have had only minimal familiarity with the work of the other O’Keeffe sisters.5 To the extent that Ida’s work has been considered at all, it has, until this exhibition, been seen only through the lens of Georgia’s career—Ida has been a peripheral, supporting character for one of the most famous artists of the twentieth century. Canterbury’s extensive research implies the degree to which Georgia herself actively suppressed Ida’s identity as fellow artist, and it provokes the important question of why. There were personal issues at play that we may never know, but larger themes of gender and power clearly shaped the circumstances under which Georgia’s career accelerated and Ida’s stagnated. The broad strokes of Ida O’Keeffe’s story as a struggling female artist in the twentieth century are heartbreakingly common, but the opportunities and barriers she encountered as Georgia’s younger sister within Stieglitz’s orbit are fascinatingly unique. Canterbury astutely observes, “Her particular set of obstacles touched on psychological, circumstantial, and practical factors.”6 The complexities of Ida’s career offer new insights and new questions for feminist art history, as well as new lines of inquiry for scholarship on Stieglitz Circle artists. By bringing Ida O’Keeffe’s biography into focus and gathering together an impressive range of her work for this exhibition, Canterbury has indeed brought Ida out of the shadows and introduced a provocative new character into the club of American modernism.

About the Author(s): M. Rachael Arauz, PhD, is an independent curator and art historian