The territorialism over the college by art history is warranted given that many key modernists share ties to the institution. The roster of students and faculty of Black Mountain College reads like a who’s who of twentieth-century American art and culture: Josef and Anni Albers, John Cage, Merce Cunningham, Ray Johnson, Franz Kline, Elaine and Willem de Kooning, Jacob Lawrence, Charles Olson, Robert Rauschenberg, and Cy Twombly, among others. The celebrity of these figures today bolsters the reputation of Black Mountain College as a subject of art historical inquiry and an incubator for the mid-century avant-garde. Yet Molesworth and Erickson’s project does much more than restate this earlier claim or reassert established hierarchies. Leap Before You Look diversifies the narrative of Black Mountain College by drawing lesser-known artists into the conversation and by challenging the too familiar trope of the genius artist through an emphasis on influential teachers and pedagogy.

A small introductory gallery lays out the chronology of the college and highlights significant years from its opening in 1933 to its conclusion in 1957, when an ongoing insufficiency of funds and decline of utopian spirit led the administration to close its doors. Much of the college’s existence seems to unfold serendipitously, undoubtedly contributing to its mythic stature in American cultural history. John Rice, a proponent of progressive education and follower of John Dewey, founded Black Mountain College in 1933, after being dismissed from his professorship at Rollins College in Florida. That same year the legendary German art school, the Bauhaus, closed, and Philip Johnson, a curator at the Museum of Modern Art, encouraged Rice to approach Josef Albers to help realize the Rice’s vision of placing the arts at the core of a liberal arts curriculum. In December, Bauhaus teacher and artist-duo Josef and Anni Albers joined the Black Mountain College faculty, contributing to “a unique synthesis between American progressivism in education and European modernism that resulted in an exceptionally dynamic, creative atmosphere.”1 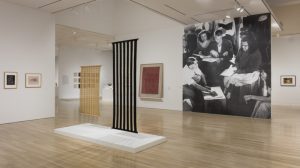 Following the introductory gallery, Leap Before You Look is organized roughly sequentially by a series of significant influences on the history and environment of the college. The exhibition title captures the pervasive experimentation and risk-taking embraced by administrators, faculty members, and students to make the college a reality. The first two main galleries explore Josef and Anni Albers’ work and contributions to Black Mountain College from 1933 until 1949, when Josef departed to chair the design department at Yale University. In the first gallery, the central placement of two woven hangings by Anni Albers signals the importance of her work and places them on equal footing with those of her husband. Framed works by both husband and wife from the 1930s and 1940s, many of which draw inspiration from Mexican art, also appear in the gallery. Josef Albers, Tenayuca, 1943, and Anni Albers, La Luz I, 1947, hung side by side, give voice to their joint interests in line, form, and Mexican culture. Furthermore, this example offers powerful evidence of a sustained artistic dialogue across their preferred respective media of painting and weaving. The collaborative cross-cultural and cross-media dialogue established by the Albers’ works continues throughout the exhibition and is a defining characteristic of the history of Black Mountain College.

The third gallery focuses on Josef Albers’ pedagogy and the work of his students while also addressing the theme of scarcity. Originally assigned at the Bauhaus, matière studies was a rite of passage for Albers’ students. Created by assembling fragments scavenged from nature and trash bins, matière studies encouraged students to reconsider the world around them. Matière studies were exercises in both the juxtaposition of textures and materials as well as process of viewing; many matière studies intended to trick the eye by obscuring the assemblage’s initial context. Albers photographed these studies, a number of which are projected from slides in the exhibition. The recovery and display of these exercises is remarkable and gives valuable insight into Albers’ pedagogy and creative process. Despite the engagement with the physical world of matière studies, few works remain, further elevating the significance of Albers’ thoughtful documentation. Albers’ original Leaf Study IX, c. 1940, of oak and tulip poplar leaves survives as a testament to innovation in the face of shortages. Scarcity of funds, traditional artistic materials, food, and other basic supplies routinely plagued the campus community, leading to the formation in 1936 of the college work program. Through this program, students and faculty farmed and even constructed several buildings following the college’s move to the Lake Eden campus in June 1941. As student matière studies, the work program, and A. Lawrence Koch’s low-cost design, such as Stool and Side Table, 1942, attest, scarcity at Black Mountain College nurtured opportunities for ingenuity and furthered a sense of community.

In 1944, Black Mountain College began offering Summer Art Institutes, which enticed well-known mid-century creative figures, such as John Cage, Merce Cunningham, Willem and Elaine de Kooning, Jacob and Gwendolyn Knight Lawrence, and R. Buckminster Fuller among others to the college’s rural North Carolina campus. Heterogeneity characterized the summer institutes. Invited by Albers, Jacob Lawrence taught during the 1946 summer session. As Bryan Barcena notes in his catalogue entry on Lawrence’s painting, Watchmaker, 1946, “In spite of their formal and philosophical disparities in their approaches to painting . . . . [Albers and Lawrence] meeting would spur Lawrence to redouble his focus on line, form, shape, color, and texture in the service of visualizing the narratives of black America.”2 As with Albers and Lawrence, an intense synergy often ensued between artists at Black Mountain College; this fusion of creativity is explored in galleries devoted to experimental architecture, modernism, music, and dance. With the assistance of students in the summer of 1949, Fuller erected the first geodesic dome, and in August 1952, John Cage, students, and other faculty members participated in Theater Piece No. 1, widely recognized as the first happening. In addition to collaborative projects, the mutual artistic respect cultivated at the college inspired many as they encountered, digested, and responded to each other’s work. 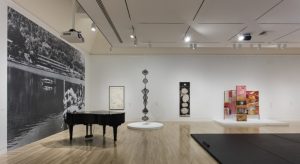 Black Mountain College was as much an experience as it was a place. Capturing the creative and experimental essence of the college required the curatorial team and designers to push the boundaries of art historical exhibitions. The centrality of music, dance, performance, and process to the narrative at Black Mountain College is emphasized in the second to last gallery, which includes a loom, piano, and dance floor. These may seem to be an unlikely assemblage, yet they greatly enrich the visitor experience during peak exhibition hours when performances activate the exhibition space. Weaving demonstrations create opportunities for active learning and reveal the technological process behind the textile art form. Dancers and musicians routinely enliven the gallery through a vigorous schedule of performances of works by Cage, Cunningham, and others.

Leap Before You Look espouses a trenchant disregard for the art historical canon, an area where the exhibition will likely make the most substantial inroads in future scholarship by bringing to light previously under-recognized artists such as Ruth Asawa and the visual artist known as Jess. The exhibition and catalogue actively work to dethrone many of the canonical figures for which Black Mountain College is best known. For example, works by Rauschenberg are scattered throughout the exhibition, muffling his dominating presence. Yet art historians know and respect Black Mountain College because of its direct association with the canon. Dismantling the canon, therefore, has the potential to undercut the visual legacy of Black Mountain College. Leap Before You Look prompts important art historical questions: Should a void created by the canon’s absence be filled? In eschewing the canon, can a contemporary assemblage of artworks garner the same power? Is quality relevant? While many works in Leap Before You Look do not have the curb appeal of later masterpieces by Kline, de Kooning, or Twombly, the exhibition is a beacon of a more inclusive art history, one less self-consciously concerned with aesthetics.

Several design decisions at the Hammer Museum are refreshingly unexpected. Large-scale wall graphics, a rare practice for art museums, appear throughout the exhibition. This is a testament to the incredibly rich visual materials the curators and catalogue contributors unearthed in the archives, such as historic photographs documenting student and academic life. Another design decision involves wall color choices. Most of the walls are painted white, reflecting the conventional belief sanctified by the Museum of Modern Art that modern art looks best on white walls. There are two noticeable exceptions: a mustard yellow wall and a charcoal gray wall. Both display student work, anonymously hung salon-style. These sections maximize limited wall space and contribute to the emphasis on teaching and pedagogy, but also suggest that these students never quite achieve the high modernist status of their illustrious teachers or star students like Rauschenberg. Student works help to destabilize the entrenched hierarchy of modernism, but design decisions such as wall color and salon-style hangs have the potential to subtly counter instead of support the curators’ objectives.

When Black Mountain College shut its doors in 1957, its legacy had yet to be realized. In a similar way, the true impact of Leap Before You Look will be felt in the coming years, but not through a single venue, exhibition schedule, or catalogue. The research brought to light by the curators and catalogue contributors is astounding and long overdue. No substitute can be made for reassembling a cohort of personalities and art previously scattered into the historical ether. Furthermore, from the catalogue alone, one cannot fully appreciate the studied intensity of student works, the dialogue made tangible between Josef Albers’ paintings and Anni Albers’ weavings, or the quiet confidence of Karen Karnes’ pots. Only time will tell whether Leap Before You Look will succeed in diversifying the narrative and legacy of Black Mountain College.

PDF: Leap Before You Look

About the Author(s): Virginia Reynolds Badgett is a doctoral candidate at the University of California, Santa Barbara.