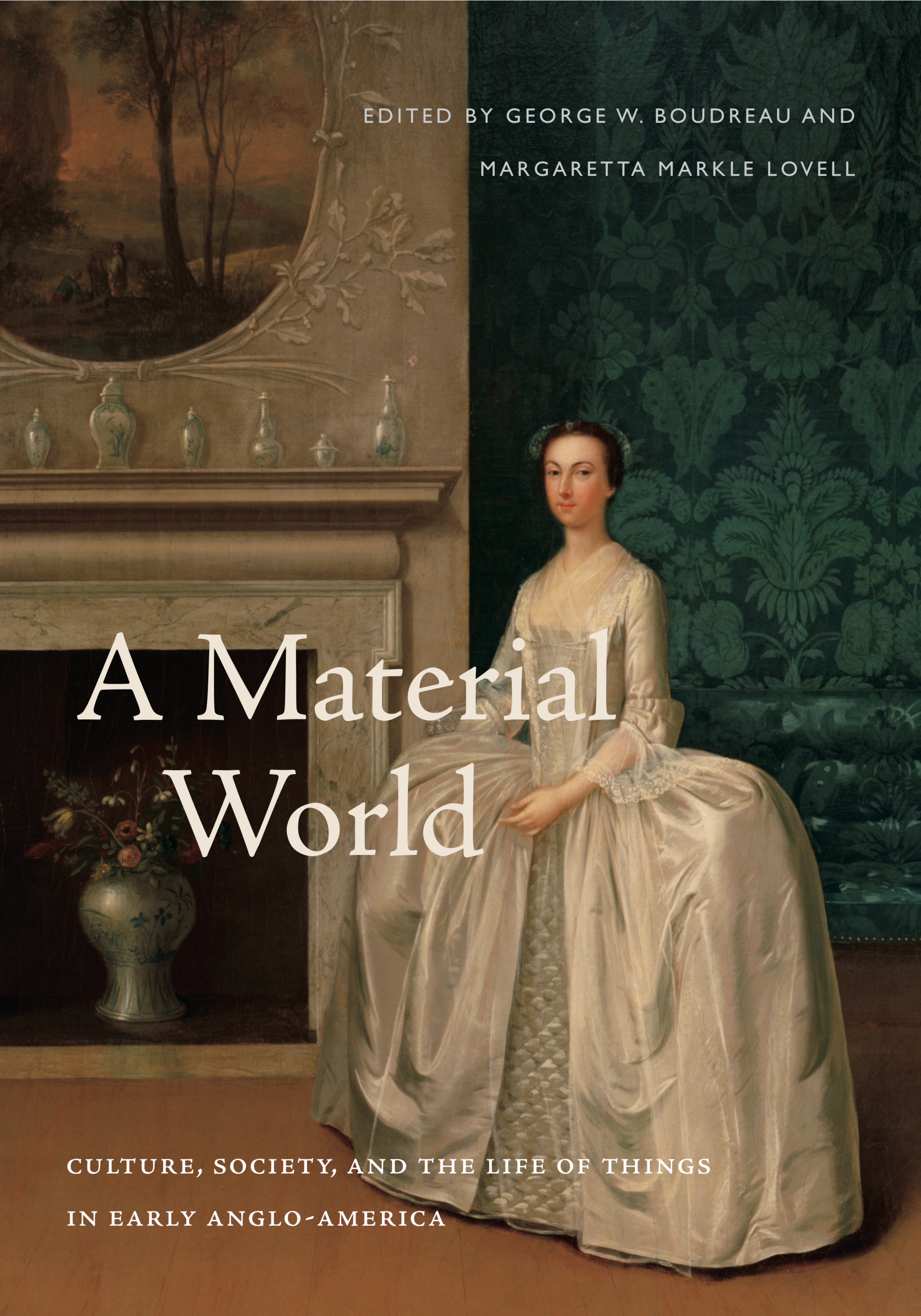 The eleven essays in A Material World: Culture, Society and the Life of Things in Early Anglo-America focus on eighteenth- and early nineteenth-century Philadelphia and New England (Boston and Salem, Massachusetts, and southwestern Connecticut), with single essay excursions to Monticello and Charleston. The historical narrative of the volume is one of transition from colony to early republic, with attention to the consequences and meanings of that transition for wealthy Anglo-American, and generally urban, male and female consumers. Most of the essays in one way or another address portrait painting, the fine art that dominated the period. The authors are for the most part from powerhouses for American material culture studies (Yale, Berkeley, and Delaware) or from museums with major collections of the period (Philadelphia Museum of Art, National Portrait Gallery, Stenton in Philadelphia, and the Salem Maritime National Historic Site). The result is that the writers have deep backgrounds in American studies, American history, and American art history, as well as curatorial experience in American decorative arts, and this is reflected in their approaches. Because of this, the volume will be useful to anyone in those fields.

Coeditor Margaretta M. Lovell, whose research and teaching have long modeled close engagement with objects, sets out the framework for the collection in the introduction. Instead of a theoretical intervention in material culture studies, it offers an alternative to art-historical investigations that prioritize stylistic innovation and originality, and to the occasional reductionism of social history (4). At times, art history has been slow to connect the fine arts to materialist contexts of production and consumption, while some historians have understood the objects analyzed here (gentry houses and their furnishings) as evidence primarily of social emulation, whereby refinement and class mobility are achieved by acquiring certain goods. This collection also focuses on art connected with social elites. But the authors look to these objects not only as expressing class boundaries but also as shaping other types of identity (such as Britishness, sexuality, and politics) that have been previously overlooked.

For example, historian and volume coeditor George Boudreau takes up Benjamin West’s Penn’s Treaty with the Indians (1771–72, Pennsylvania Academy of the Fine Arts)—which has been astutely called “an allegory of provincial politics”—to emphasize how the concept of Quakerness was at stake for the artist, patron, and “Quaker party,” led by Benjamin Franklin.1 Addressing the “imagined” Quaker past of the painting, Boudreau neatly points to West’s identification with his patron, proprietor Thomas Penn (15). So too Peale scholar Carol Soltis examines Charles Willson Peale’s famous Staircase Group (Portrait of Raphaelle Peale and Titian Ramsay Peale I, 1795; Philadelphia Museum of Art), arguing that its significance for the artist and for contemporary observers was not the employment of trompe l’oeil but its transformation of Joshua Reynolds’s Grand Manner. Instead of the aristocratic nonchalance of an Anthony Van Dyck portrait of royal brothers (or portraits by Peale’s competitors West and John Singleton Copley), Peale’s sons instead invite the viewer into a semi-public and republican space.

Ellen Miles’s study of canvas size also sets out to rectify conventional stylistic interpretations of eighteenth-century art, although she makes a revisionist claim from a differently constructed set of evidence. Pointing to artists’ reliance on imported, pre-stretched canvases, she argues that the resulting standard formats and prices came with assumptions attached about style, too. Smaller sizes meant, among other things, less detail; art historians who ascribe neoclassical severity or rococo ornament to political or cultural influences need to account first for these material constraints (84).

That neoclassicism expressed industrial standardization or that history paintings articulated contemporary political struggles may not be new ideas in and of themselves, but these political and transatlantic interpretations are effectively applied here to new subjects. Emily Murphy’s study of a family’s Georgian homes in Salem interestingly considers them as an aggressively Republican conquest and reconstruction of a space that had excluded them, instead of adoptions of a British type intended to merely demonstrate the owners’ ascendancy to a Federalist elite. Likewise, Nancy Siegel tackles a subset of Revolutionary War-era satirical prints produced (mostly) in England in order to consider how gendering the foes as mother-daughter created sympathy for the injured territories, who were figured both as kin and as Indian warrior.

The essays that address collections of objects or types of objects, rather than singular examples, tend to also address meanings produced by reception (broadly considered). For example, Lovell’s essay cleverly adopts the expansive category of “heads” to analyze Thomas Jefferson’s arrangement of public rooms at Monticello. She considers animal trophies and biblical paintings of severed heads, along with sculptural busts and portraits of great men, in terms of their relationship to the living human heads in conversation in Monticello’s rooms. In doing so, she builds on the idea that a collection is a portrait of the owner, in order to stage a broader argument about the ideology of “individual causality” behind watershed events that pervaded the early national period (170).

Jennifer Van Horn’s fascinating analysis of dressing tables as body doubles for women, taken from her book The Power of Objects in Eighteenth-Century British America, also draws on how women interacted with these objects (opening, closing, and manipulating them) to identify how these commodities threatened to subvert racialized public discourses about the legibility of character.2 Similarly, the study by Paul Clemens and Edward Cooke of inexpensive mantel clocks in a rural setting helps upset the conventional wisdom that agrarian life was more tied to “natural” time than the cities, where a more privatized measurement epitomized by the gentleman’s watch held sway. Instead, the authors suggest, the economies of business (water power, prevalence of the right type of wood, skilled labor) determined what sort of clock was sold, and where.

Patricia Johnston’s essay takes up an iconographically defined set of objects: the various versions of the landing of the Pilgrims at Plymouth Rock. Her focus is on the highly fictionalized designs produced by Italian émigré M. F. Corné, and she tracks his oil paintings to sites where Federalists consolidated a New England identity—the East Indian Marine Society Museum in Salem, for example—and, like other contributors, demonstrates how a national culture developed from an expression of local resources.

Johnston’s essay points to a great strength of this collection: the way in which the essays complement each other and are intertwined. In Murphy’s essay, the Salem merchant family who employed American artisans to build a classicizing home with an eagle on top reappear in Johnston’s chapter as patrons for paintings that showed the transmission of British culture to a sternly rocky New World. The Peale family’s collection of animal and human heads in the museum where the Staircase Group hung inflects Lovell’s account of Monticello, just as Stephen Hague’s account of a more typical (if unusually lavish) transatlantic gentry house such as Stenton contrasts with it. Hague argues that Stenton—a country house near Philadelphia—articulates the permeable boundary between the lesser landed gentry and the upper elements of bourgeois society, who together formed a governing class (132–33).3 Stenton’s owners and their employer, William Penn, reemerge in Laura Keim’s account of nineteenth-century antiquarians seeking to construct a lineage to the founders of Pennsylvania. Keim considers how historical society founders sacralized the past through collections of relics (such as fragments of clothing and drawer pulls) that notably underscored the historical value of everyday life.4

At fifty dollars for a hardback book, this anthology is a bargain. It is larger than most academic monographs (but not coffee table size), printed on glossy paper, and has at least two color illustrations per chapter, with more than one hundred in total. It was subsidized with funds from the institutions of some of the contributors, but also by organizations invested in studying the colonial era, such as the McNeil Center for Early American Studies, the Chipstone Foundation, and the National Society of Colonial Dames of America. In such a focused collection there must inevitably be omissions—of approaches, comparative material, historiography, or actors. But the volume is nevertheless proof that the meticulous study of the experience of living in a material world is richly rewarding.

About the Author(s): Wendy Jean Katz is Associate Professor of Art History at University of Nebraska-Lincoln