A fascinating focus exhibition, Measured Perfection: Hiram Powers’ Greek Slave, is currently on view at the Smithsonian American Art Museum (SAAM), organized by Karen Lemmey, the curator of sculpture. Using a variety of didactics, including plaster models, unfinished artworks, videos, photographs, technical analyses, prints, and tools, the exhibition sheds light on the workings of a nineteenth-century sculptor’s studio, while also exploring methods unique to Powers’ busy Italian workshop. The exhibition is ostensibly about the process for producing the plaster model and marble copies of Powers’ most famous work, the Greek Slave, but it also raises important questions about the role of the artist in the creative and production process and reminds us of the reproducibility of marble sculpture. In its collection, SAAM holds over twenty marble sculptures by the artist, his papers, as well as the contents of his Florence studio, including over one hundred plaster models and his collection of tools, making it an ideal venue for this show. 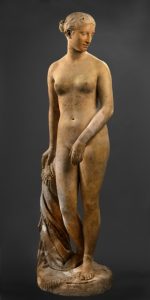 Modeled in 1843, the Greek Slave represents a Greek woman being sold at a slave market in Constantinople during the Greek struggle for independence from the Ottoman Empire in the 1820s. Although nude, she exemplifies Christian virtue, turning modestly away from the viewer, as her shackled hand clasps a cross and locket, symbolizing both her Christian faith and devotion to her beloved. The Greek Slave, the most well-known American sculpture of the nineteenth century, was first exhibited in 1851 at the Great Exhibition of the Works of Industry of All Nations in London. It created such a sensation that Powers was propelled to international fame. Over the next twenty-five years, his studio produced six full-scale marble versions and over one hundred busts of the subject.

The exhibition title, Measured Perfection, refers not to Powers’ practice of creating what he deemed idealized beauty based on his well-documented aesthetic theories, but rather to the precise measuring system employed to reproduce exact sculptural replicas, even in the absence of the artist. The traditional method for this process is called pointing. First, the artist would develop a clay sketch of the proposed subject, often around a metal armature for stability. The sketch would then be reproduced by a trained caster into the more stable material of plaster, and finally, the plaster was pointed to ready it for reproduction in marble. By this means, prominent points on the plaster would be marked, in Powers’ case by metal pins stuck into the plaster, to guide the carvers. A pointing machine, essentially a vertical rod with a series of smaller, moveable rods that clamp into place at precise points, would then be attached to the plaster model. At each point, its rods measured where and how deeply the marble should be carved. The pointing machine was then aligned with the marble block, where the rod, fixed in place, located the corresponding points within it. During the carving of a sculpture, the pointing apparatus would be moved back and forth from plaster model to marble numerous times to achieve perfect similitude.

Measured Perfection illustrates the pointing and carving processes in several ways. Adjacent to a plaster model of a bust with its original point markings, a modern day pointing apparatus is attached to an unfinished bust, demonstrating the use of the device with a work in progress. A video featuring an artist carving with the pointing apparatus further explicates this meticulous and time-consuming process. An especially instructive display is that of three versions of Genevra, the first ideal bust attempted by Powers shortly after his arrival in Florence in the 1830s. A small plaster model is displayed on a banker (a workbench or base for a sculpture in progress), alongside another plaster model of the same work. Visible seams allow the visitor to see how the second model was cast in pieces (piece mold casting) and then joined together, a method that preserved the mold, allowing for the casting of multiple models. A nearly finished marble of the same work illustrates the order of the carving process, and how the points helped to guide the carver’s hand, right through to the final stages of carving. 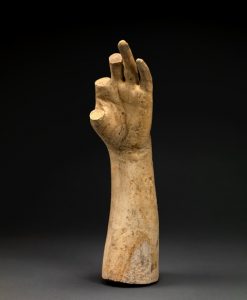 The focal point of the show, however, is the life-size plaster model of the Greek Slave displayed on a pedestal framed by heavy red drapery, evocative of the manner in which final marble versions were exhibited in the nineteenth century. Like most of the models in the show, the pins are still visible, as is a metal hook at the top of the head used to attach the pointing apparatus. A large reproduction of an x-ray reveals that the model is solid plaster, stabilized by a metal armature. Intriguingly, in a small case adjacent to the model, there is a plaster cast of a human hand, which corresponds exactly to the proportion and positioning of that of the Greek Slave. It was traditionally thought that this hand was cast from the finished sculpture, but closer analysis reveals that it was cast from a human hand, suggesting that Powers may have used body casting in this statue. Casting body parts, rather than modeling them in clay, was generally frowned upon as a shortcut, or seen as a sign that the artist was not able to model the body accurately. The stigma associated with the practice led French sculptor Auguste Jean-Baptiste Clesinger (1814–1883), for example, to submit an over-life size sculpture of Bacchante to the 1851 London Exposition to dispel rumors that his models were body casts. The existence of this hand raises interesting questions about Powers’ working methods relative to the ways in which artists may participate in the production process, a theme of delegated labor in some artists’ studios that still resonates today.

A case featuring plaster casts of Powers’ daughter’s hand best demonstrates the sculptor’s experiments with casting. According to his wife, Powers took a cast of his young daughter’s hand while she was napping, which he then displayed in his studio on a green cushion. This hand was also the model for numerous copies ordered by clients, and there were a number of such casts in Powers’ studio at the time of his death, including one attached to a plaster sunflower and marked for pointing, which is displayed in the exhibition. Powers undoubtedly turned this model over to his carvers to produce replicas in marble, and he is therefore responsible for the concept, but not for the skill-based labor necessary to reproduce it. Of course, Powers’ ability to model, carve, and manipulate a variety of materials is beyond question, as exemplified through his successful portrait practice and the specialized tools he designed and patented. Measured Perfection, however, draws our attention to the wide array of technology and techniques that he could employ in his studio, and the show reminds us that artists throughout history have necessarily been drawn to timesaving and innovative technologies.

In order to bring this point home, Measured Perfection also demonstrates the three-dimensional printing process, an example of contemporary technology for reproducing sculptures based on a model. During the preparation for the exhibition, the Digitization Program at the Smithsonian scanned the plaster model of the Greek Slave, creating a digital record of the work, and a short video of this process is on view in the exhibition. Such a digital scan serves at least two purposes: it provides a permanent version of the plaster original for posterity, while also making it available to scholars and interested persons to study virtually. Because the three-dimensional scanner and the pointing apparatus accurately measure the surface of an object, Lemmey suggests that these two methods of reproduction are conceptually similar. To demonstrate this point, the Smithsonian Digitization Program produced a three-dimensional print of the plaster model of the Greek Slave composed of glass-filled polymer, which now resides in the Renwick Gallery in the room designed to house William Corcoran’s marble version of the work (now in the collection of the National Gallery of Art). Because it was scanned from the Smithsonian’s plaster model, the three-dimensional print includes the iron hook for the pointing apparatus as well as the pointing pins. The public is also invited to print a version of the Greek Slave using this digital model. One wonders what Powers, who applied for a patent on the Greek Slave to guard against unauthorized copies, would make of this.

An exhibition that emphasizes materials and process, Measured Perfection is part of a growing trend in museums that suggests increasing interest in behind-the-scenes investigations of the secrets of the artist’s studio. And while the show certainly does this, including the revelation that Powers experimented with body casting, one omission is a fuller mention of his workforce, who did most of the actual carving. In 2007, the Taft Museum hosted the exhibition Hiram Powers: Genius in Marble, which explored Powers’ working methods and workforce within the context of a larger exhibition that explored his relationship to Cincinnati, the city in which he received his formative training. As a focus show dedicated to process, Measured Perfection could shed even more light on the workings of Powers’ studio through a closer look into the labor force responsible for giving his artistic conceptions finished form and their particular role in maintaining a busy and prosperous nineteenth-century sculpture studio.

Although there is no exhibition catalogue, several essays that document this research will be published this summer in a special issue of Nineteenth-Century Art Worldwide titled Hiram Powers’ the Greek Slave: A Transatlantic Object, coedited by Martina Droth and Michael Hatt, with essays by Lemmey and other scholars. The contributors examine the Greek Slave in an international context, exploring each version individually, rather than as copies of one original work of art. Like the Smithsonian Digitization Project, the Nineteenth-Century Art Worldwide online platform will contain sustained documentation of the Greek Slave; it will include technical analyses, three-dimensional imaging, an interactive timeline, as well as a variety of images related to the vast visual culture inspired by this iconic sculpture.

About the Author(s): Jenny Carson is Professor of the Department of Art History, Theory, and Criticism at the Maryland Institute College of Art