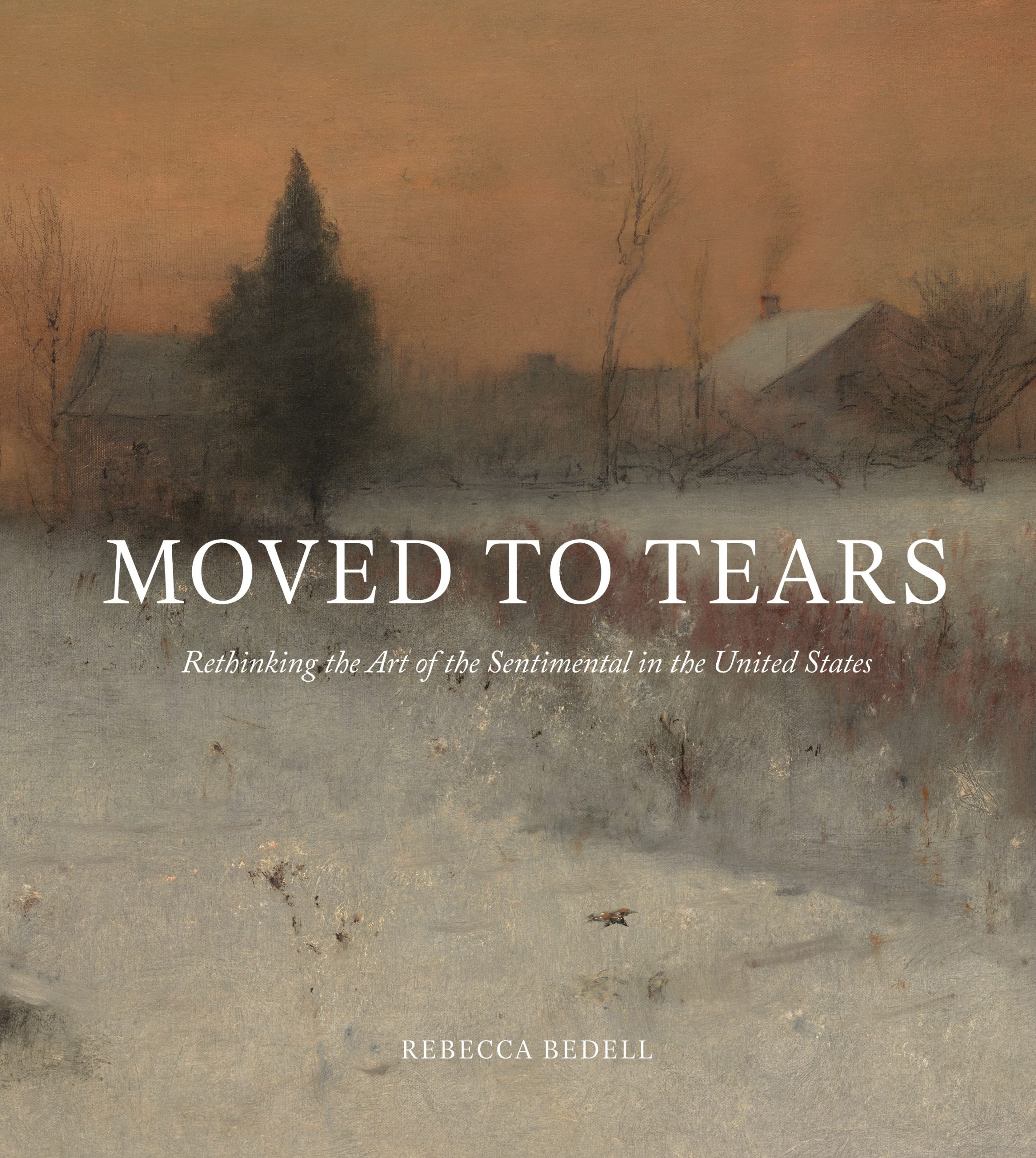 Although sentimentalism has tended to suffer at the hands of the art historian, Rebecca Bedell uses this intriguing volume to recover the wide-ranging influence of what she calls “the softer emotions” in American visual culture.1 Tracing critical aversion to the sentimental back to a masculinist modernism of the early twentieth century, Bedell argues that a disdain for anything emotional, affective, or otherwise ostensibly “feminine” is deeply entrenched in the DNA of American art history. By locating signs of the sentimental in everything from John Trumbull’s battlefield scenes to the residential structures of Frank Lloyd Wright, Bedell offers an alternative narrative of the American canon—one in which sentimentalism stands at the heart (if you will) of a national art.

This claim is built on a substantial bibliography in the fields of literary studies and cultural history, which has firmly established the centrality of sentimentalism in American life and, in particular, its pivotal role as an agent of social change in nineteenth-century America.2 While deeply indebted to this earlier scholarship, Bedell’s examination of the subject diverges in one notable respect; Moved to Tears divorces the study of sentimentalism from the analysis of any one particular formal structure, defining the sentimental work of art not by genre or style but by its mobilization of affective connection and the establishment of emotional bonds across social and political divisions. According to Bedell, the sentimental “asks us to conceive of ourselves in relation to others, to imagine ourselves in their place and to feel for them, in some measure, as for ourselves, recognizing a common and shared humanity” (4). With this rather broad remit, Moved to Tears encompasses more than one hundred and fifty years of American art and an array of artistic practices, including antislavery almanacs, architectural designs, figural portraits, and forays into early abstraction.

Across six roughly chronological chapters and an epilogue, Bedell charts the evolution of a broadly defined sentimentalism from the early republic to the post–World War II period. Following a brief introduction that outlines the rise and fall of sentimentality as both an aesthetic and social value in the West, the book’s first chapter examines the role of sentimentalism in the early national period via the work of Charles Willson Peale and John Trumbull. Pointing to instances of affective engagement stimulated by Peale’s portraiture gallery or Trumbull’s scenes of camaraderie on the battlefield, Bedell portrays the life and work of both artists as exemplars of what Enlightenment theorists referred to as “sensibility.” Such framing will be familiar to historians of the early republic, as will the chapter’s overarching story of sensibility placed in service of political union. Yet there is utility in seeing these familiar tropes linked to those of subsequent chapters, their connections revealing a larger “culture of sentiment” that transcends periodization. In this same vein, architectural historians will be familiar with the third chapter’s discussion of the sentimental ties used by Andrew Jackson Downing to sell his readers on the morally improving idea of home. However, Downing’s nostalgic embrace of white middle-class domesticity takes on new meaning when considered alongside the intimate interiority of Henry Ossawa Tanner’s paintings, discussed in the second chapter, and their sympathetic portrayals of racial and ethnic difference. Likewise, Downing’s nostalgic appeals to the childhood home are given broader context in the fourth chapter’s discussion of Hudson River School painting and its idealization of a preindustrial landscape. At times, one wishes Bedell had made these implicit comparisons more explicit, helping the reader understand the significance of particular sentimental recurrences across time and space. Similarly, some may take issue with her reframing of historically specific concepts (such as sensibility, sympathy, or nostalgia) to fit her broader, transhistorical category of sentimentalism. Indeed, as the chapters skip from artist to artist and genre to genre, it can start to feel as though the sentimental is an almost universally applicable classification.

It is precisely this ecumenicism, however, that delivers the payoff of the book’s final two chapters—the first devoted to the work of Winslow Homer and the second split between that of Mary Cassatt and John Singer Sargent. As Bedell argues, these three artists have long been heralded for their lack of sentimentalism, with the critical distance they display interpreted as an insistent sign of their modernity. Consider, for example, Sadakichi Hartmann’s early characterization of Homer’s work as “aggressive in disposition . . . engaged in a bitter warfare against all conventionality . . . claiming that nature, studied from the standpoint of observation and discernment rather than that of intellectuality or sentiment, should be the only foundation of art” (123). Frances K. Pohl’s more recent assessment of Cassatt’s domestic scenes as “not sentimental depictions, but rather serious, and often monumental” suggests that this critical model is alive and well (135). Yet, as presented by Bedell against the backdrop of the book’s preceding four chapters, the role of sentiment in these artists’ work becomes impossible to ignore. Downing’s nostalgic domesticity haunts the corners of Cassatt’s views of mothers and children, images that themselves reverberate in Tanner’s tender canvases. Sargent’s society portraits summon sympathetic recognition in an echo of Peale’s gallery of “great men.” And although Homer’s dynamic depictions of the Maine landscape bear little resemblance to the harmonious idylls of the Hudson River School, their magnification of nature’s subtle dramas nonetheless demands from the viewer an empathetic response. Using the epilogue to trace such reverberations into the twentieth century, Bedell argues that the modern artist’s relationship to sentiment is not so much antagonistic as it is dialectical, deeply dependent on American art’s long legacy of sympathetic tropes, even as the works in question transform these tropes in search of something new.

As readers have likely already observed, the names that populate the pages of Moved to Tears are the headliners of any mainstream history of American art, among them Peale, Trumbull, Tanner, Durand, Inness, Homer, Sargent, and Cassatt. This is clearly a conscious choice on Bedell’s part, a direct rebuttal to a critical tradition that devalues the sentimental as acritical and anti-intellectual. Her assertion of the centrality of the sentimental to the history of American art insists upon the emotional, the affective, and the feminine as not only elements of a nineteenth-century historical reality that must be addressed but also essential terms in the contemporary critical lexicon. This is a welcome corrective to the field’s conventional narrative, and given its remarkable readability (beautifully illustrated with a lively, engaging, and exceptionally clear text), Moved to Tears is set to become a staple in the American art classroom. At the same time, this particular use of sentimentalism as a critical lens has its issues, insofar as it continues to focus the field’s attention on the same canonical cast of characters. Given the potential for sentimentalism to reorder the critical values of an American art history, one might like to see the canonical brought into more sustained conversation with the wider world of visual and material culture. The chapter encompassing a study of Henry Ossawa Tanner comes closest in this regard, contextualizing his work in a broader history of sentimental imagery in both abolitionist and proslavery discourse. Viewed alongside a crudely worked woodcut from the American Anti-Slavery Almanac or the saccharine illustrations produced to accompany the work of the slavery apologist James Lane Allen, the pathos of Tanner’s carefully wrought images takes on extra depth. One can imagine a similarly rich ecology of images revolving around the work of Homer, Cassatt, or Sargent and helping to heighten the reader’s understanding of these artists’ dialectical engagement with the nineteenth century’s broader culture of sentiment.

Even with this caveat, Moved to Tears offers a timely reconsideration of the terms in which artistic significance is understood. As David Lubin remarked in a review published in the summer of 2020, the book’s insistence on art’s ability to maintain human connection is especially resonant in the era of COVID-19, when so many of our personal interactions have taken place through images on a screen.3 Bedell’s faith in sentiment as an agent of social change has also taken on new meaning since the book’s 2018 publication. Following years of vitriolic partisanship under the Trump administration, the January 2021 attack on the United States Capitol exposed fissures in American culture far deeper than many believed possible. That sense of “sentimental political union” idealized by the nation’s founders seems increasingly out of reach, and the idea of sympathy as the “chord which makes all hearts akin” hopelessly foreign (1). Yet Bedell’s expansive view of sentiment as a binding force in American life holds out hope: “Tenderness, care, sympathy, empathy, and compassion may be turned to misguided and destructive ends as well as laudable ones. Yet they are by and large part of our better natures, moving us to reach out and connect with others across the divides and distinctions that separate us. . . . There are times when we want and need to be moved to tears” (179).

About the Author(s): Elizabeth Bacon Eager is Assistant Professor at Southern Methodist University