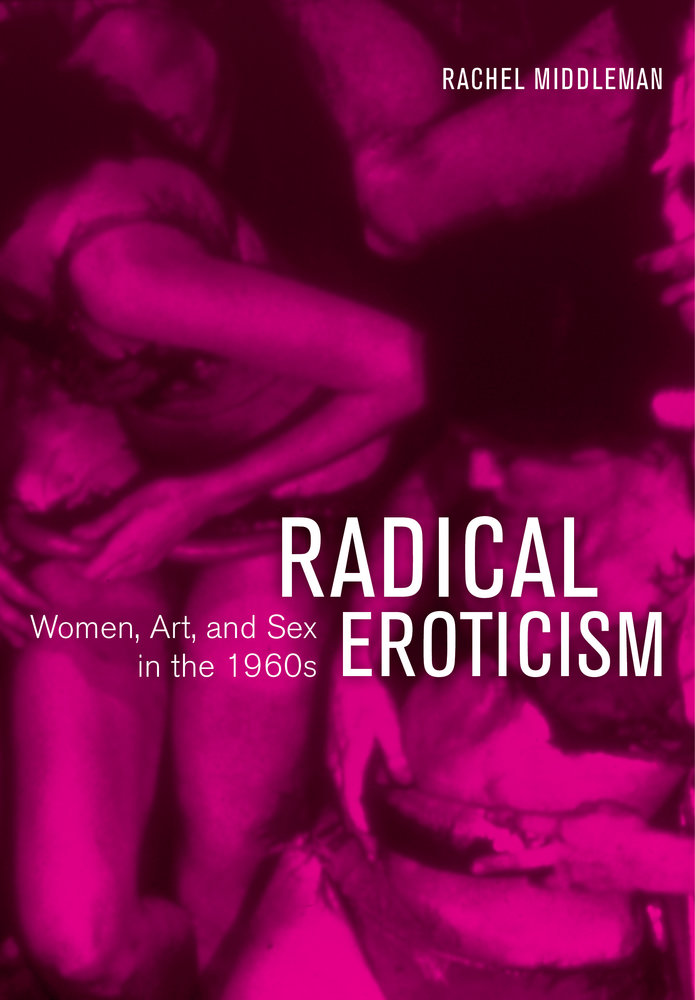 In the first chapter, which centers on Schneemann, Middleman analyzes the artist’s scandalous body art performance, Meat Joy (1964), and experimental film Fuses (1964–67), to show how the artist “claimed explicit male/female sex for socially redemptive erotic art and away from its commercial exploitation in pornography and the exclusive purview of heterosexual men” (63). Meat Joy, which featured four bikini-clad male/female couples who interacted with raw chicken, fish, and paint, as guided by a “serving maid” in an apron who provided meat and other materials to the performers, so disturbed one male audience member during the first performance that he tried to strangle her as three female spectators ran to her rescue. The maid’s unique role, as Middleman points out, reinforced the female authorship of the event and subverted expectations of female subservience as she directed the performers’ actions (43). Fuses, which presented viewers with collaged scenes of Schneemann’s daily life, including sex with her male partner as her cat watches, has frequently battled censorship since its initial screening in 1968. Middleman asserts that Schneemann expressed “her experience of sex while at the same time unsettling conventions of commercial pornographic films and troubling expectations of women” by splicing together, reversing, layering, and superimposing the frames of the film in ways that disorient viewers and transgress normative representations of heterosexual sex (60). Building on writings about Schneemann by Amelia Jones and Anette Kubitza, Middleman ultimately argues that Meat Joy and Fuses “engaged with the intersubjective complexities of representing eroticism as a way to communicate with her audiences and provoke their consciousness” (61).3

The third chapter also looks at an artist who, until relatively recently, was overlooked in the literature on art of the 1960s. Marjorie Strider, like many of the women who contributed to Pop art, has been virtually ignored in histories of the genre, despite her representation in prominent exhibitions at Pace and Dwan galleries and inclusion in Lucy Lippard’s book Pop Art (1966). Strider was further discounted by feminist art history because her eroticized Pop images were seen as celebratory of sexist mass culture. Building on Kalliopi Minioudaki’s recent scholarship on female Pop artists, Middleman shows how Strider deployed commercial images of women, especially the pinup girl, to critique the manipulation of female bodies in service of male heterosexual desire.4 Middleman is reticent to claim Strider’s bikini girls as an “empowering female gesture” (as Minioudaki does), given that they were regularly placed in the context of erotic art exhibitions that habitually objectified women, yet she does read the works as proto-feminist in the ways that they confront viewers with the constructed and clichéd nature of these images (104–5). Portraying breasts and buttocks that awkwardly protrude from the frame, Strider disturbed both the emphasis of modernist art on medium specificity and the slick eroticism of a Playboy centerfold. Her feminist commitments, however, come into even greater focus through Middleman’s analysis of Strider’s lesser-known conceptual and performance works of the late 1960s. Taking gilt frames to the streets in her collaborative Street Works series (1969) or having nude models wear her Frames Dress (1969) in public, Strider investigated the ideological power of the frame and the contingency of viewing in ways that anticipated feminist art of the 1970s.

About the Author(s): Miriam Kienle is Assistant Professor of Art History and Visual Studies at the University of Kentucky