Among the several frequently quoted statements by the artist Ruth Asawa (1926–2013) is this: “Sculpture is like farming. If you just keep at it, you can get quite a lot done.” This 10% inspiration, 90% perspiration idea belies the restless creativity of this artist and the formal beauty, technical innovation, and variety of her work. Yet there is much to value in Asawa’s modest assertion of the doggedness of her practice. The principal technique in her best-known sculptures is derivative and simple in concept and painstakingly manual in execution, employing an interlocking looped-wire construction. With this repetitive technique Asawa made sculpture built up from repeated formal units that inevitably display subtle differences. Difference achieved through repetition might, in fact, be as appropriate a summary as any of her achievement, and as evocative of its fundamental humanity. 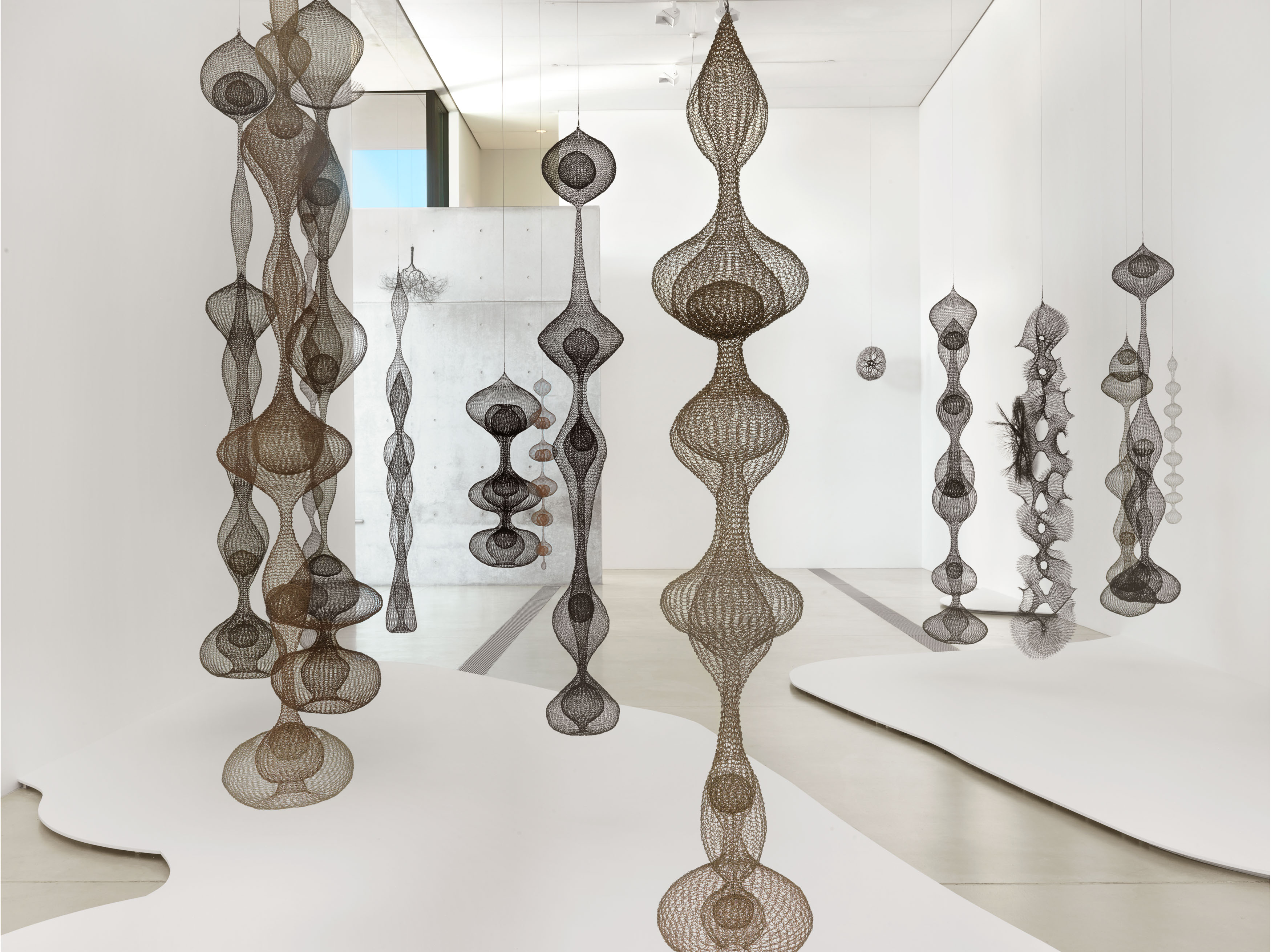 Most authors writing about her work routinely link her organically shaped forms with her artistic and personal identity as Japanese American, as a woman, or as a mother. Photography has also been effectively recruited to this tendency to total identification between the artist and her production, from the beguiling Imogen Cunningham photos of Asawa caressing her wire sculptures to the many photographs of the comfortable domesticity of the artist, working while surrounded by her children. There is nothing inherently wrong in this. Her personal life and her formation as an artist are compelling stories that deserve to be told. But something is lost when her singularity is stressed.

The recent retrospective exhibition Ruth Asawa: Life’s Work, at the Pulitzer Arts Foundation in St. Louis, was the first museum show of this artist’s work to be held outside the West Coast. Her art is well known there and deserves to be acclaimed far outside the orbit of its creation in the Bay Area. The exhibition was accompanied by a well-conceived publication with astute and engaging essays by the Pulitzer Foundation’s Tamara H. Schenkenberg, the show’s curator, and by the art historians Aruna D’Souza and Helen Molesworth.

The great variety of Asawa’s work was well represented in the exhibition. Her looped-wire sculptures, hung from the ceiling, were deservedly featured in the main-floor galleries. The artist preferred that these sculptures hang in groups, as they were displayed here, protected by foot stops in organic shapes that contrasted pleasingly with the insistent rectilinearity of the Tadao Ando building (fig. 1). They are of two principal types: closed form, creating containers that sometimes nest or interpenetrate smaller wire constructions; and open form, with edges that radiate, sometimes on several axes, from a center point. The closed forms evoke baskets or string bags or, in aggregate, kelp forests, a context flip with unexpected spatial implications. The open forms suggest everything from hat brims to petals and seashells. Sometimes the two types are combined, bringing to mind jellyfish or bursting seedpods. 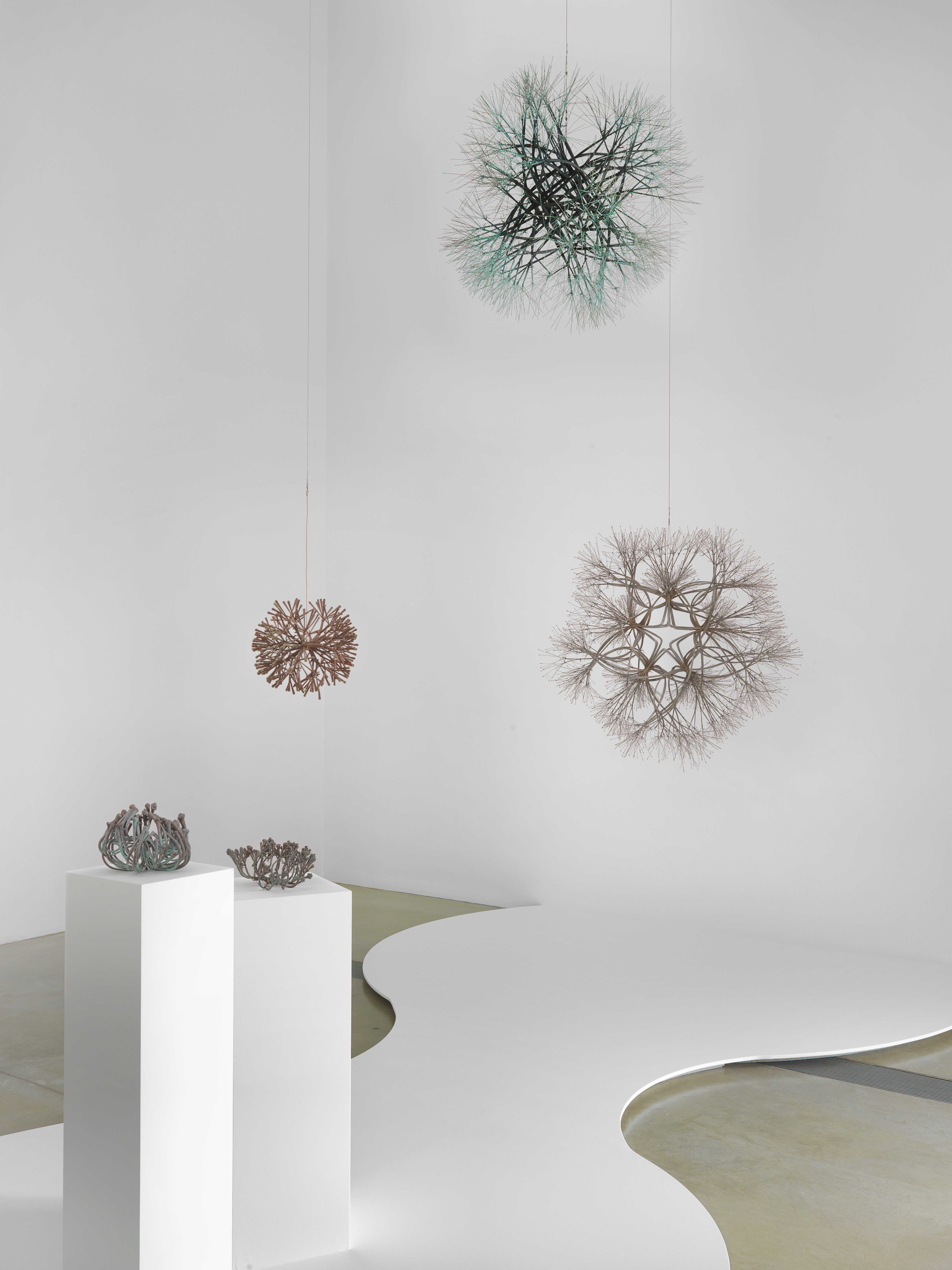 In another substantial body of wire-based work, the artist tied uniform-gauge wire in thick bundles, which she then successively divided, spread, and subdivided into ever- smaller groups, analogous to the branching of trees or shrubs or the organization of root systems (fig. 2). These hung from the ceiling or were mounted on a wall. (The catalogue includes a taxonomy of the many variations on these two basic types.) Others show her experiments with the electroplating of open-form wire structures, patinating them to create a greater variety of forms, surface textures, and colors, evoking madrepores and other corals. In the descriptions Asawa gave her work in lieu of titles, the occasional assertion that the forms were “based on nature” seems unnecessary, because the natural world is the impetus of all her abstractions.

In addition to sculpture, the exhibition included lithographs; drawings in ink, pencil, and tempera; small oil paintings on paper; printed drawings made from repeated impressions of commercial stamps (before Arman and Saul Steinberg made this a signature feature of their art); and an absorbing film about her work by Robert Snyder. For obvious reasons, her astonishing public commissions for fountains and other large-scale public sculptures, both abstract and figurative, in relief and in the round, could not be adequately represented in St. Louis; nor could extensive documentation of her dedication to arts education in San Francisco, a testament to her commitment to public service that amounted to an act of forgiveness.

Asawa’s formation and achievement are inseparable from racial politics in the United States in the early 1940s. She was the daughter of Japanese immigrant farmers who, like most Japanese Americans on the West Coast, were forced into internment following the Japanese bombing of Pearl Harbor. Her subsequent preparation to be a schoolteacher was stymied by lingering postwar bigotry, leading her to enroll in art school in 1946, at the progressive Black Mountain College in rural North Carolina. There she was exposed to the work and guidance of both US-born artists and immigrants, led by Josef and Anni Albers, in an innovative curriculum that stressed hands-on, materials-based learning. In North Carolina, the Alberses carried on the Bauhaus emphasis on traditional crafts as valid artistic activities in the creation of modern forms.

From the beginning of Asawa’s career, her wire sculptures straddled the worlds of art and craft. She learned the looping technique of wrapping a wire around a wooden dowel from Mexican basket makers following her first year at Black Mountain. Early public exposure of her work depended in part on craft-oriented exhibitions and publications. Recent efforts by some authors to free Asawa from the presumed taint of craft and its conventional feminine associations are overly defensive and misplaced. Of course Asawa was making art, but to do so she fully embraced the need for technical refinement and patient aggregation that is at the heart of so many craft practices. Her labor-intensive technique and its production of difference through repetition allies her with a significant group of female artists of later generations for whom gradual accumulation could produce impressive and sometimes unexpected results. Pushing against the male-dominated form conception and industrial fabrication processes of Minimalism, Eva Hesse and Jackie Winsor often wound, threaded, and molded their materials into irregular accumulations built on a geometric foundation. More recently, Tara Donovan has arrayed polystyrene cups, paper plates, and other common manufactured objects into topographies that allude to natural processes. While this may not be a specifically feminist lineage, the historical association of craft with female labor allies these artists to Asawa’s pragmatic maker sensibility.

Asawa’s particular fusion of labor and medium, and her artisanal energies, are the more piquant because of her characteristic sculptural material and her consistent use of it. Wire had been made, and its tensile properties exploited, from antiquity, but the kind of uniform, solid-core cylindrical wire Asawa used is a modern industrial product. Wire has not often been employed as a component in modern sculpture, let alone as a primary material. It doesn’t declare modernity as emphatically as plastics did, in the work of Naum Gabo or Nikolaus Pevsner, for instance. But it does have a distinct twentieth-century history within the development of abstraction, from Pablo Picasso’s guitar strings, from 1914, through Vladimir Tatlin’s corner counter-reliefs, from 1915, and László Moholy-Nagy’s Light-Space Modulator of the 1920s, to such Kinetic art figures as Takis, Alexander Calder (in his Constellations of the 1930s), and Richard Lippold. Different from Picasso’s bricoleur use of wire as a literal representation of other strands, these artists used wire to convey an idea of energy or connectivity across space.

Asawa did not deploy wire in this metaphoric way. Nevertheless, the results of how she used wire place her work within a general shift in emphasis in twentieth-century sculpture practice, from object to system, including visualizations of unseen forces, and from form to spatial relationships, as in the work of the artists just mentioned. Asawa’s forms are distinctive, but so are the spaces they contain and the areas around her sculptures and between them, as are the shadows they cast on nearby walls. This incorporation of surrounding space was shrewdly exploited in the Pulitzer installation in the arrangement and lighting of the sculptures, especially in the smaller galleries. Her looped-wire sculptures are more effective in masses than as specimens. They play off one another, stressing—once again—difference as a function of repetition, and ambient effects that are more important than the individual components.

Some artists exploited the linear character of wire in another spirit entirely. Here Calder, and to a lesser extent, Picasso, treated a wire as a line, and line meant drawing, a means to draw in space. The concept of “drawing in space” was articulated by Julio González and was practiced by both him and Picasso in the 1920s, but for the most part, their work in welded metal was more a form of “painting in space.” Calder’s wire circus performers, animals, and portraits of the 1920s took full advantage of the malleable property of metal wire, as agile as a pen, in virtuoso twists and succinct visual puns. They are among the wittiest sculptures of their century. In contrast to these Calders, Asawa’s sculptures are nature-based abstractions. There is wit in them, even whimsy, but Awasa did not use her line to draw; she used it instead to weave in space. Her line is a thread that weaves a form that allies with and supports other, similar forms, forms that are at their most effective when they make a family of sculptures. Balanced between the metaphoric and the representational, between pleasure and purpose, between craft and art, maybe Ruth Asawa’s art, in its gentle insistence on being both derivative and generative, was singular after all.

About the Author(s): John Klein is Professor of Art History at Washington University in St. Louis