The past was a multispecies affair. However, the stories we tell about it remain, on the whole, resolutely focused on human beings. Lately, scholars have been increasingly attentive to nonhuman actants, recognizing how works of art bear the traces of ecological processes or speak to the agency of seemingly inert materials. Yet, animals—both as historical subjects and discursive figures—remain under-considered. In comparison to other humanities scholars, art historians have been particularly reluctant to engage with the questions and methods emerging from the field of animal studies. Old habits of thought compel us to treat the animals we encounter in our research as blank screens, trivialities, or distractions that must be purged from serious scholarship, just as conservators assiduously keep hungry critters from consuming the very artworks and archival materials we study.

The idea of taking animals seriously—whether as artistic subjects or ethical ones—can easily seem a callous distraction from more pressing, which is to say human, concerns. Regrettably, the rhetoric of animal activism has co-opted the language of the African American liberation struggle in ways that imply a parity between animals and African American people. During the decades following the American Civil War, the nascent animal rights movement pointedly donned the “abolitionist” mantle, seeking to claim antislavery’s philanthropic energy and funding. Whether it is the 1890 publication of Black Beauty by the Massachusetts Society for the Prevention of Cruelty to Animals with the subtitle “The Uncle Tom’s Cabin of the Horse,” or, more recently, a 2005 PETA exhibition asking “are animals the new slaves?,” time and time again anticruelty advocates recapitulate centuries of dehumanizing rhetoric, instrumentalize Black suffering, and seek to legitimize their cause by suggesting that the struggle for racial justice has already reached its end. Thus, it is hardly surprising that anti-speciesist and antiracist scholarship have tended to overlook one another, “even though,” as animal studies scholar Bénédicte Boisseron argues, “their inextricability is incidentally what begs to be addressed.”1 American human and nonhuman lives are not equivalent, but they are entangled, enmeshed in a culture within which, as Claire Jean Kim puts it, “animalization has been central, not incidental to the project of racialization.”2 Grappling with the connections between these co-constitutive or, as Kim puts it, “synergistically related” taxonomies of power is difficult and delicate work.3 Yet keeping the so-called “animal question” separate from the question of race only impoverishes our understanding of both terms and limits our ability to dismantle the systems of oppression that have long profited from the compulsive comparison of the two. Americanists, particularly those of us who seek to engage with the painful legacies of slavery and colonialism, would be well served to address the lacunae that speciesism casts upon our field, since, as history repeatedly shows us, the material effects of this ideological framework have all too frequently, all too painfully been borne by human beings as well as animals.

This insight is reflected, for example, within the woefully understudied animal paintings of African American artist Henry Ossawa Tanner  (1859–1937). One of his earliest known works, Pomp at the Zoo (fig. 1), speaks to his enduring fascination with lions, a species that had by then become a uniquely ubiquitous bit of colonialist iconography. In taking on this loaded subject matter, Tanner hardly plays coy here; a boldly legible white sign at the top of the composition plainly states that the caged animal is an “African Lion.” 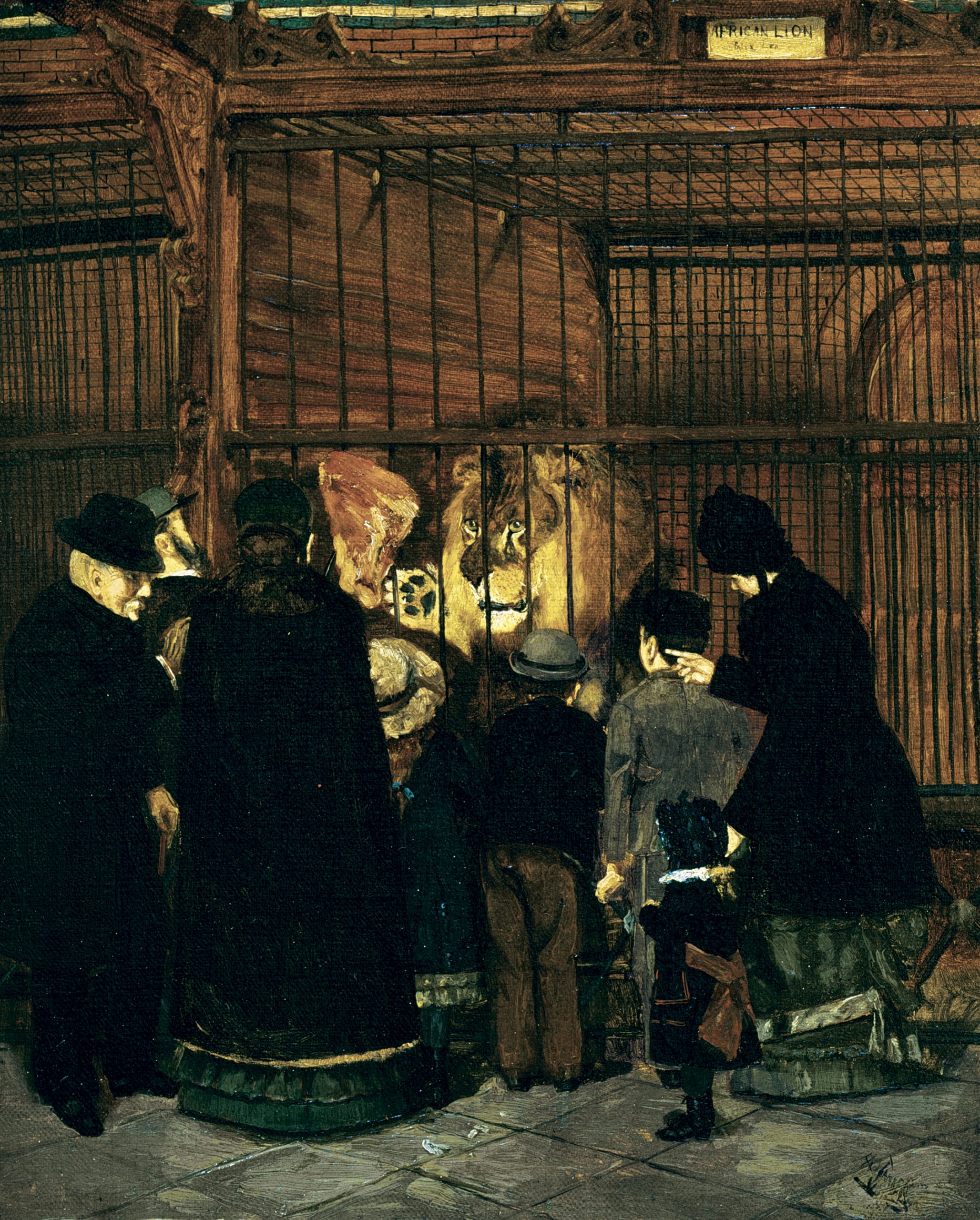 Crucially, the field of animal studies, much like Tanner’s painting, insists that we reckon with the specific historical subject that bears all of this symbolic weight. In this case, as the title of the painting indicates, we are invited to consider an elderly lion named Pomp. Before coming to the Philadelphia Zoo, Pomp starred in O’Brien’s Traveling Circus, passing the majority of his life in a small cage stuffed with other lions, performing an act in which he would dance to the sound of pistol shots and allow his trainer, a man dressed in a leopard-skin belt and spangled tights, put his head into his mouth.4 Tanner depicts Pomp in the midst of a different sort of performance, feeding time, when zoo visitors would gather to witness the spectacle of a wild beast tearing into a hunk of meat. Pomp’s raised paw and inert expression hardly conveys the ferocity his audience would have expected and desired. This disconnect between type and individual, this lion’s failure to exhibit the characteristics thought universal to Panthera leo, made Pomp a local curiosity. An 1884 Philadelphia Inquirer article notes that he was “tame as a kitten” because, in the words of Pomp’s keeper, captivity “knocks the spirit out of them.”5

In portraying Pomp’s indifference to food, Tanner depicts “food snub,” a behavior shared among animals in captivity. It is perhaps the most common form of “stereotypy,” the repetitive, often self-mutilating animal behaviors caused by chronic stress, boredom, and anxiety. Stereotypic actions like food snub illustrate the trauma that constant visibility inflicts upon creatures who, in their natural habitats, would instinctually value the safety and stealth that only invisibility can provide. Researchers in a 2018 study on zoo lions noted how, particularly in small enclosures like the ones within which Pomp spent the majority of his life, these animals exhibited “an emptiness that becomes a problem in itself.”6 Pomp’s strange “emptiness” is precisely what seems to have fascinated Tanner, who so sensitively depicts the trauma that captivity and perpetual visibility has inflicted on the creature. By all accounts, Tanner, like the aforementioned keeper, had spent considerable time watching this animal’s habits and demeanor, observing first-hand how life in a cage had “knock[ed] the spirit out of” the lion, and how this manifested in a consistent refusal of food. In Pomp at the Zoo, he emphasizes the contrast between the bloodthirsty “African Lion” promised by the display and the gentle, elderly creature being pressed upon by a wall of viewers below. Here, the human visitors are the ravenous ones.

In the zoo, a lion like Pomp would not only be used to signify colonial dominance over African wildness; he would have also served as an object lesson in a certain habit of looking, of visually parsing and classifying the world, which was profoundly racialized at the turn of the twentieth century. Through labels like the one in Tanner’s painting, which identify animals by species rather than name, age, or origin, the modern zoo insisted upon the necessity of viewing individual creatures as undifferentiated illustrations of type. Lessons about the animal kingdom inevitably represent discourses on human nature well. As urban historian Patrick H. Wirtz insists: “Just as animal taxonomies informed zoo visitors how the natural world was hierarchically organized, so they also inferred similar hierarchical organizations of human society.”7 Pomp at the Zoo illustrates how the zoo cultivated ostensibly refined habits of looking that would render animals and racialized others alike as deindividuated objects of white knowledge and classification. For Tanner, this insistence on the painful consequences of the classifying gaze speaks to his own savvy anticipation of how, as a young Black artist negotiating a predominantly white art market, his own unique personhood would inevitably be reduced to a generic illustration of Africanness and racial difference. Yet, at the same time, Tanner’s refusal to anthropomorphize the animal, his sensitive attentiveness to the leonine specificities of Pomp’s body and expressions, engenders feelings of interspecies alliance while, nevertheless, preempting any claims to sameness. In this respect, it is telling to note that the last known appearance of Tanner’s 1896 Daniel in the Lions’ Den, a work that marks the culmination of his early-career research into the racialization of visuality and animality, was at the 1904 St. Louis Louisiana Purchase Exposition. A visitor to that event could, in the span of a single afternoon, view Tanner’s painting in the Palace of Fine Arts, watch trained animals perform tricks amidst the colonialist fantasies on the midway, and then walk to the anthropology section’s state-of-the-art human zoo to flick coins or lit cigarettes at young men from the Belgian Congo.8

Like today’s animal studies scholarship, Tanner’s lion paintings investigate what human-animal relations can reveal about systems of human oppression. Additional artists, objects, and voices from the past tell similarly compelling stories about our engagements with other species. In ignoring them, we only naturalize blindness to the richly entangled nature of our world. Each year brings us closer to ecological catastrophe, to the extinction of innumerable species, including our own. The ongoing tragedy of the novel coronavirus pandemic has made us all too familiar with the havoc that zoonotic diseases can wreak, particularly on our most vulnerable human communities. Such viruses emerge from and flourish within the nightmare worlds of animal agriculture, scenes of industrialized slaughter, and egregiously exploited labor, which Ag-Gag legislation has forced into a state of perpetual invisibility. The intellectual acknowledgment that our planet is a shared one, that even our bodies depend on the myriad forms of life that teem within our very guts, has a great deal to contribute to the history of American art as well as our capacity to imagine a healthier and more equitable American future.

About the Author(s): Annie Ronan is Assistant Professor in the Department of Art History at Virginia Tech

Editors’ Reflections on the First Five Years of Panorama

Who Will We Be? The Association of Historians of American Art on its Fortieth Anniversary

Material Matters: The Transatlantic Trade in Photographic Materials during the Nineteenth Century

Daguerreotypes and Humbugs: Pwan-Ye-Koo, Racial Science, and the Circulation of Ethnographic Images around 1850

“The Time Has Now Gone by When Things of This Nature Are to Be Hidden from the Public”: Mediating Bodily and Archival Violence

The Levee: A Photographer in the American South

Follies: Architectural Whimsy in the Garden and Mark Dion: Follies