Refusing the Call for Recognition

Myths of Asian Americans abound, including their high rates of achievement and, now, political influence, with the election of Kamala Harris as Vice President of the United States. But being “white adjacent” to power does not necessarily translate to a redistribution of power, nor has it led to recognition, visibility, and legibility in major art museums and art-historical surveys. It is still an exceptional moment rather than due course when there is mention of an Asian American artist in a class on modern and contemporary art or in a scholarly art history journal or monograph. 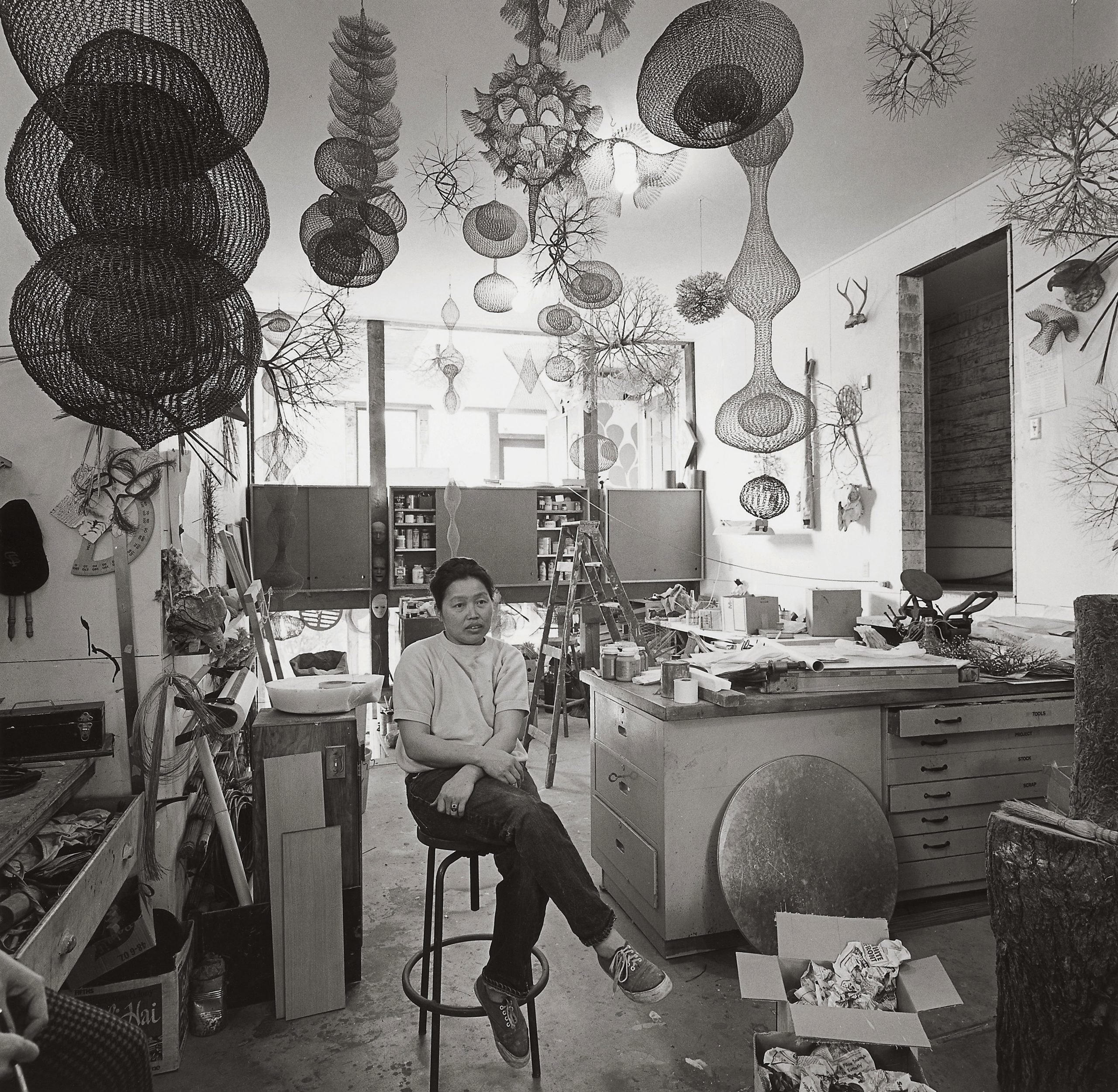 In July 2020, it was truly a delightful treat to pore over the full-length feature of Ruth Asawa in an issue of the New York Times Magazine; a rare presentation in which Thessaly La Force engaged both the artist’s life experience and art practice as an “American master” (fig.1).1 While “almost all accounts of her art and life remark on the fact of Asawa’s Japanese heritage,” there still remains a need to calibrate the significance of an artist’s ethnicity and encounters with racism, and how, in the words of Karin Higa, “being a Japanese American has meant different things at different junctures to the conditions of Asawa’s art-making and the contexts of her art’s reception.”2 La Force’s profile on Asawa was exceptional in following Higa’s advice. The recognition of this artist was so long overdue. Given the enduring history of absence and marginalization of Asian American art in mainstream institutions, there is an understandable impulse of those individuals who are invested in Asian American art to quickly accept recognition of such artists as Asawa in order to secure a space and place for Asian American art in perpetuity. From another vantage point, however, the belated and untimely mainstream acceptance of Asawa and Asian American art must be seen in part as symptomatic of the establishment of neoliberal multiculturalism. Parallel to the ways in which race was folded into culture and antiracism into multiculturalism in the 1990s, neoliberal multiculturalism’s valorization of racial and cultural difference needs to be understood for what it is: a subordination and covering over of the contradictions and hierarchies of racial differentiation in order to maintain the status quo.

In the wake of global mass protests in response to George Floyd’s murder in May of 2020—revealing once again the racial injustice and racialized police violence against Black lives—light has been shed once again on the racial disparities, microaggressions, and structural discrimination that have taken place in art institutions, large and small. Until recently, race had been discussed only intermittently in the art world except as a passing trend or in response to some controversy, rather than as a reckoning with institutional racism.

The term “postrace” or “post-racial discourse” has further confounded the conversation by positioning “race” as an outmoded construct, rather than a nimble and mutable trope of classification and identification that transforms and sublimates its meaning and appearance in various forms. Neither irrelevant nor obsolete, race appears and disappears in micro- and macro-moments.

Micro-events include daily interactions in the museum and gallery workplace, institutional programming and acquisitions, and criticism and response to exhibitions. Macro instances might include the intense debates and protests provoked by the 2017 Whitney Biennial, which included Dana Schutz’s Open Casket (2016), the painting by a white artist based on the photograph of Emmett Till’s lynched body. Despite a number of official statements and exchanges on race and representation, cultural appropriation and ownership, the Whitney Museum ultimately refused to contend with the question of institutional and curatorial accountability. Also unremarked by both critics and the institution was the race and positionality of the curators, Christopher Lew and Mia Locks, and how Asian Americans in the art world are too often seen as racial wedges and/or buffers.

When a forum on race does take place at a major museum, as in the Schutz controversy, Asian American artists are rarely engaged in, let alone invited to join, such conversations, despite the activism of Godzilla and REPOhistory, collectives who came into formation partly as a response to anti-Asian racism. When it comes to race and art, Asian Americans are literally outside, on the streets, agitating against a gallery space (as in the case of the Chinatown Art Brigade’s protest of Omer Fast’s show at James Cohan) or working within the belly of the beast as curators and administrators.3

While Asian American art remains invisible and sidelined when it comes to issues of race in the art world, it is simultaneously being mobilized in maintaining the appearance of the art world as inclusive and cosmopolitan. Then as now, the tacit requirement for Asian American art to be visible is for it to downplay race and to be “exceptional” and “proper,” a visual manifestation of an artist’s search for identity and inner experience rather than the representation of Asian American experiences that have been occluded due to injunctions, laws, and misrepresentations. Since the late 1980s to the present, artworks framed or marked as Asian American art are presumed to be about narrow presentations of identity or a hybrid form that shifts toward or away from “Asian” identity. Even when the artworks are not apparently about identity, they continue to be framed as such, as in the case of Roberta Smith’s New York Times review of One Way or Another: Asian American Art Now (OWOA). In the review, Smith describes the artworks by Mike Arcega (fig. 2) and Binh Danh (fig. 3) as “simplistic forms of identity.”4 While the selected artworks by Arcega and Danh could be approached as tangentially about identity, they are, more directly, poignant visual commentaries on Hurricane Katrina and the Vietnam War. It might in fact seem quite strange that “identity” is brought forth as the defining category to characterize these artworks, which, for their part, touch intimately on large-scale historical events. Ignoring the interconnections between colonialism, war, imperialism, and racial capitalism, critics too often deem such art to be illegible; misread and misrecognized, they are overlooked and perceived to be out of joint. These kinds of artworks are currently apart from, but also a part of, a shadow archive of American art and a surplus of contemporary art that deems it uncategorizable. 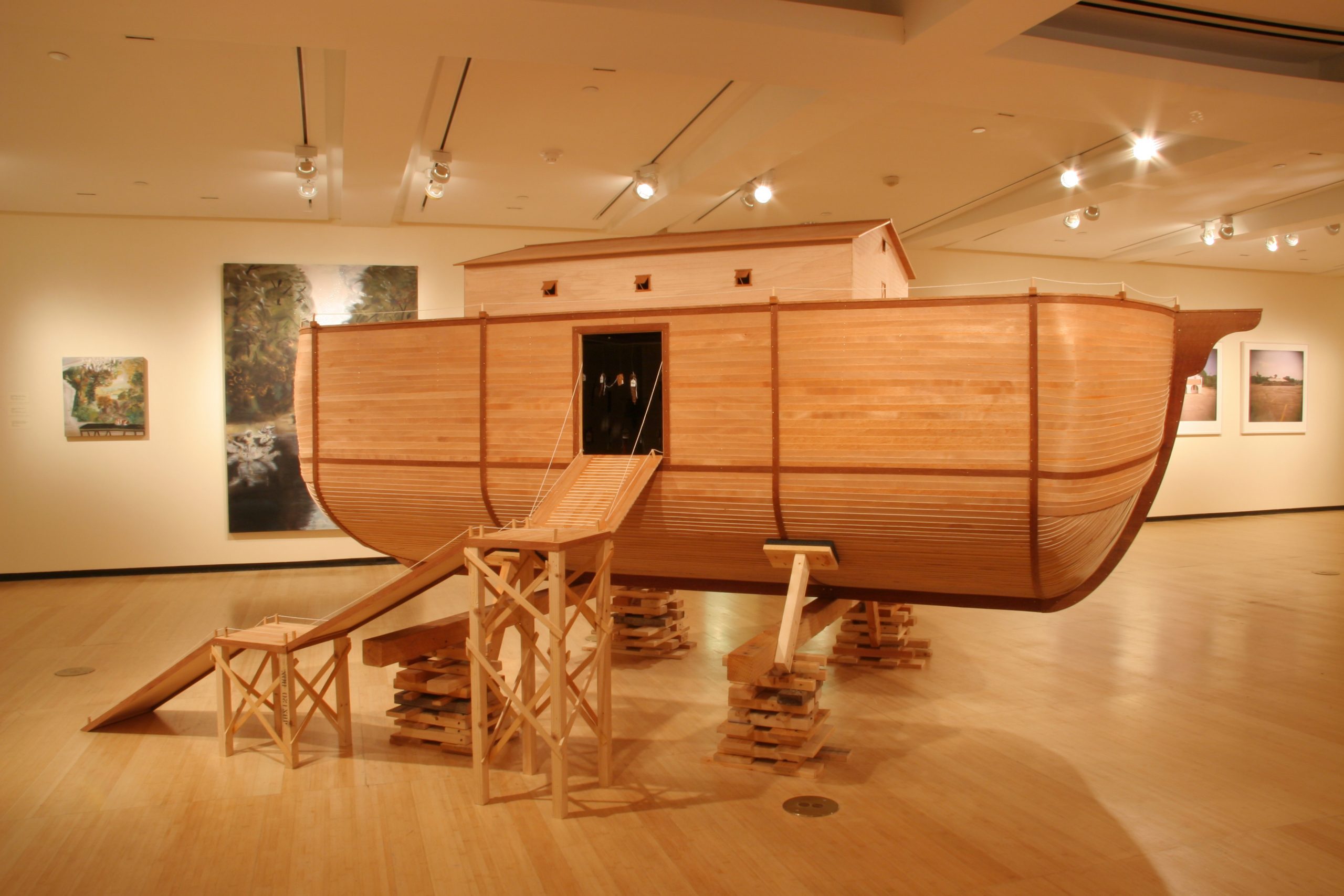 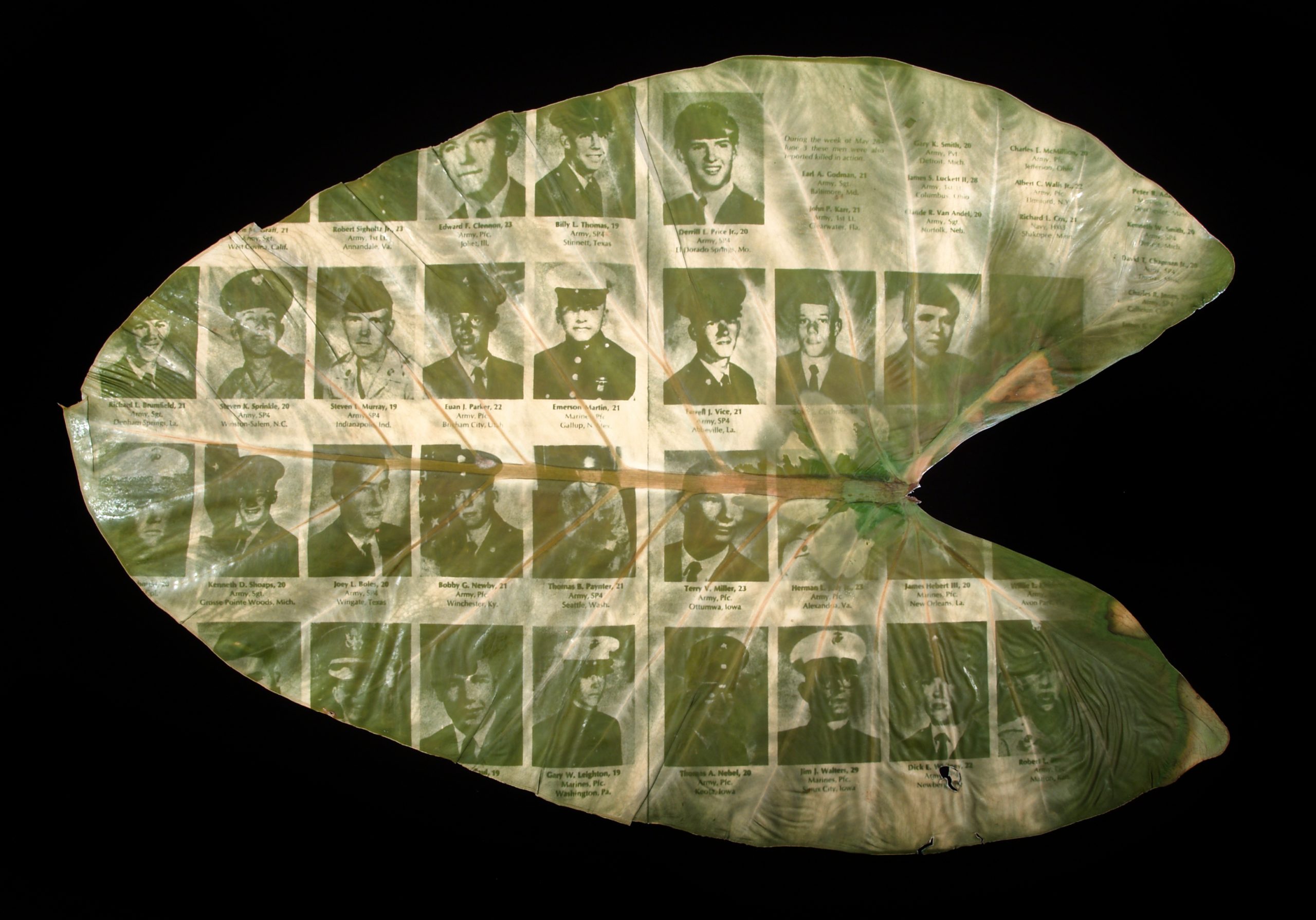 Outpacing reviews and readings of their artwork by curators, critics, and scholars, Asian American art practices, such as those of the artists included in OWOA, recall for me the case of Yoko Ono, who was well ahead of her time in her refusal to be neatly categorized throughout her career. Likewise, Tehching Hsieh’s formal explorations of time and art in relation to America’s mythical promise of individualism and freedom have been constantly misrecognized. In his refusal to take his rightful place as a model minority, ethnic artist, and US citizen—unsettling the proper ordering of fields and identities—Hsieh is another proto-example of an artist who understood the constant strategic need to have the meaning of one’s work remain both open and multiple, and therefore elusively uncategorizable.5

Following the lead of these two artists, how might we reconceive Asian American art differently as a category—not of objects to be collected, or a site of reconciliation and containment by the art market, or an exhaustive repository that absorbs those Asian Americans artists who are on the threshold of fading into obscurity and/or whose work is uncategorizable? In my book Unnamable: The Ends of Asian American Art (2018), I suggest holding off on the quick impulse to claim works such as those by Hsieh as “Asian American”—not to deny the circumstances of his formal making of the work, but to avoid circumscribing and burdening the work with a ready-made set of interpretations already embedded in a viewer’s purview or imagination, foreclosing alternative and iterative presentations of the work.6 While I understand that no name can describe fully what a work of art is doing or evoking, to name and claim a work of art as Asian American, unfortunately, at this time, impedes the momentum of an ongoing encounter, undercutting the possibility of a politics already underway rather than pushing it forward.

I’d like to propose here the need to check out the scholarship of Bakirathi Mani, Vivian Huang, Ronak Kapadia, Alpesh Patel, Gayatri Gopinath, Joan Kee, and ShiPu Wang, among others, who are engaging select works by Asian American artists in relation to complex regimes, forces, and aesthetic movements, expanding Asian American art as a capacious discursive formation. In contrast to the indifference and laziness of mainstream critics to find a vocabulary in which to engage works by Asian American artists past and present, these scholars have found a way to analyze these artworks with formal, historical, and theoretical rigor that doesn’t relegate the artist to the role of information provider or political messenger.

It is time to retire, in 2020, the multicultural, postcolonial, geographically/ethnic/and race-specific survey exhibition. This outmoded curatorial artifact that emerges every decade as the go-to remedy to “fix” racism and the under-representation of a certain group of artists needs to go. It is time to dismantle and re-invent the museum and its funding structures. It is crucial to support, more now than ever, collaborative, transversal and experimental modes of exhibition-making that contest racist perceptions and facilitate a constant flow of ideas and exchanges, in order to engender new forms, subjects, and relations. It is time to break the model minority myth, refuse representational visibility, and re-envision Asian American art as a liminal space to present charged forms of minoritarian activity and world making.

About the Author(s): Susette Min is Associate Professor at the University of California, Davis

Editors’ Reflections on the First Five Years of Panorama

Who Will We Be? The Association of Historians of American Art on its Fortieth Anniversary

Material Matters: The Transatlantic Trade in Photographic Materials during the Nineteenth Century

Daguerreotypes and Humbugs: Pwan-Ye-Koo, Racial Science, and the Circulation of Ethnographic Images around 1850

“The Time Has Now Gone by When Things of This Nature Are to Be Hidden from the Public”: Mediating Bodily and Archival Violence

The Levee: A Photographer in the American South

Follies: Architectural Whimsy in the Garden and Mark Dion: Follies