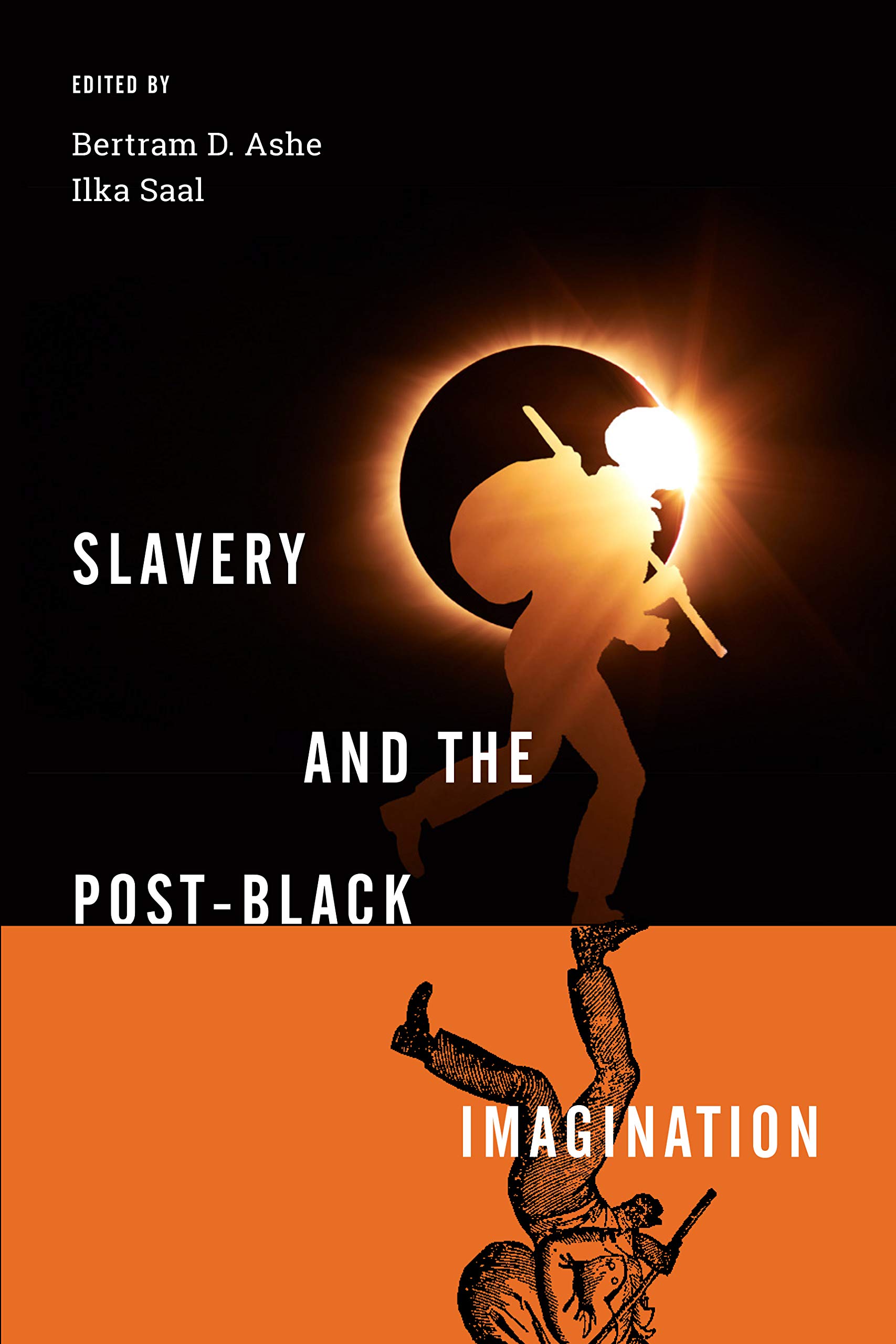 The 2020 publication of Slavery and the Post-Black Imagination coincides with heightened frustrations about the continuation of anti-black racism.1 While there has been increased interest in black representation and attention to voices speaking for and about black humanity and individuality, there are still deep questions about the impact of slavery in the United States and its many lingering oppressions. In the aftermath of the Trump administration, a period that was marked by brazen racist rhetoric, racialized violence, and multiple riots and demonstrations, an edited volume that seeks to expand rather than strictly define black identity and lived experience is much needed. What does it mean and look like to be black in the United States? How do the legacies of slavery shape black cultural production in the present moment? And are black people still bound to these legacies?

For Slavery and the Post-Black Imagination, Bertram D. Ashe and Ilka Saal compiled a multidisciplinary range of texts that aim to unpack the aesthetics of post-blackness. Focused on post-black practitioners (those born after the end of the Civil Rights Movement) in the United States, the editors of the volume argue that each generation of artists needs to work with and through its own version of slavery (11). While previous generations of neo-slave narratives focused on shared trauma and were characterized by a “melancholic historicism,” visual artists, filmmakers, authors, and songwriters working since the 1990s approach the lasting legacies of the antebellum South as something to examine, interrogate, recreate, and/or control in the spirit of what the editors refer to as “blaxploration” (6, 8). While post-soul and post-black are used interchangeably in the introduction, the editors champion the term “post-black” as a refusal of narrow categorizations of black identity in favor of more complex and open notions of blackness. As such, the essays that follow highlight artists who practice new models of engagement with the racist and brutal past as well as the continuation of anti-black racism in the United States in the present. This includes artists who upset accepted categorizations and stereotypes using humor and multiple media to “flip the dominant epistemological scripts” (10). Citing post-blackness as a “valid and productive category of analysis with regard to the poetics and politics of contemporary engagements with slavery in African American culture,” the authors in this collection seek to understand how contemporary artists engage with the past and the ways in which it informs their representations of freedom and identity in the present (9).

The term “post-black” originated in the art world in the late 1990s, coined by curator Thelma Golden and visual artist Glenn Ligon, so it is fitting that the first chapter investigates post-black aesthetics and representation in the artwork of arguably one of the most controversial artists of the twentieth century, Kara Walker.2 In “The Blackest Blackness: Slavery and the Satire of Kara Walker,” Derrek Conrad Murray discusses Walker’s silhouette scenes of antebellum plantation slavery as “an exemplar for the mobilization of satire as a form of self-criticality” (23). Murray is interested in the ways that Walker’s work rejects established and essentialist ideas about black respectability and authenticity in favor of exploring the messy complexities of blackness. For Murray, Walker’s more unsavory style of artistic joke-making is an example of how to upset standing expectations of blackness and political correctness in institutionalized black art and scholarship, in order to liberate ourselves from ideas of neoliberal tolerance and the “dogmas around the historical memory of slavery” (35).

Derek C. Maus, in his essay “Three-Fifths of a Black Life Matters Too: Four Neo-Slave Novels from the Year Postracial Definitely Stopped Being a Thing,” further develops the idea of post-black as a viewpoint that both pays attention to and separates us from the legacies of slavery. Maus does this through a reading of four slavery-based fiction novels published in 2016: Natashia Déon’s Glory, Yaa Gyasi’s Homegoing, Colson Whitehead’s Underground Railroad, and Ben Winter’s Underground Airlines. The temporal marker of 2016 is significant; it was the final year of Donald Trump’s presidential campaign and subsequent election, and the conclusion of Barack Obama’s two-term presidency. Maus analyzes these novels in relation to the “optimism that Obama’s election (and reelection) heralded the disappearance of institutionalized white supremacy,” and the generalized misuse and mash-up of the terms post-black and post-racial during the years of his presidency (43). As a corrective, Maus adopts the idea of “post-soul” aesthetics, an earlier, more precise definition of post-blackness that celebrates the black consciousness of the past as something to embrace and grow from instead of something we need to move beyond. That is, how post-soul might function as a philosophy of liberation for black artists.

In a useful organizational strategy, subsequent essays build upon the insights offered by Murray and Maus through close readings of representations of slavery in contemporary texts and visual culture. Eight chapters are loosely organized by artist modality: visual, intertextual, satirical, and then performative. This arrangement successfully offers the reader some guidance while also allowing the essays space to speak together in interesting and varied ways. For example, in “Whispering Racism in a Postracial World: Slavery and Post-Blackness in Paul Beatty’s The Sellout,” Cameron Leader-Picone argues that Beatty’s 2015 novel challenges narratives of racial progress and neutrality through a fictional reinstatement of slavery and segregation in a Los Angeles town. Beatty uses satire to critique the stability of prescribed notions of African American literature and “essentialist logics and racial nostalgia,” that “relegate African American identity to a series of limiting scripts” (66). For Beatty, post-blackness hinges on individual black freedoms and self-definition. In contrast, collective black activism is the heartbeat of Kindred, both Octavia Butler’s 1979 neo-slave, science fiction novel and the 2017 graphic adaptation designed by Damian Duffy and John Jennings. Mollie Godfrey, in her essay “Getting Graphic with Kindred: The Neo-Slave Narrative of the Black Lives Matter Movement,” analyzes the “aesthetic innovations” of time travel (Butler) and juxtaposed images (Duffy and Jennings) as two effective ways to “articulate models of black collectivity,” acknowledge the “plurality of black identities and interests,” and make room for diverse black communities and intersectional feminism (84–85).

In “‘Stay Woke’: Post-Black Filmmaking and the Afterlife of Slavery in Jordan Peele’s Get Out,” Kimberly Nichele Brown discusses Peele’s 2017 horror film and implores the reader to “stay woke.” For Brown, Peeles’s film is ironic, self-reflexive, and anti-essentialist, and it takes a “liberationist approach” to the current conditions of black life in America (107). Brown reads the main plot of the film—the theft of black bodies for the implantation of white psyches—as reflective of the ever-present aftershocks of slavery that continue to reverberate through the black experience. These aftershocks persist as “skewed life changes, limited access to health and education . . . incarceration and impoverishment,” as well as cultural appropriation (108). Further, Brown reads the Sunken Place, where black psyches are banished, as a metaphor for the historic Middle Passage, a space where black agency died as individuals literally perished at sea. As both Brown and Peele remind us, black people must always remain awake to the present manifestations of slavery lest we find ourselves unable to “get out.”

In the first of two artist interviews included in the collection, Justin Robinson, a former member of the Carolina Chocolate Drops, discusses his exit from the African American string band after years of performing, “I Wish I Was in Dixie’s Land.” Robinson’s research into the origins of the song reveal that it was written by musicians from a free black family living in Ohio. It was then appropriated by minstrel show performers before becoming the unofficial anthem of the Confederacy during the Civil War. The Chocolate Drops’ post-black reclamation of “Dixie” is complicated by the fact that they often perform for all-white audiences. Robinson’s discomfort with this dynamic and choice to leave the group highlights the obstacles contemporary artists face when referencing slavery in their work. Similarly interested in questions of audience, playwright Jacobs-Jenkins discusses the importance of participation “”An Audience is a Mob on its Butt”: An Interview with Branden Jacobs-Jenkins.” Specifically, he is interested in how humor and laughter draw viewers out of their comfort zones as they confront representations of slavery and their lingering manifestations as stereotypes of blackness in the present moment. He credits a list of well-known contemporary post-black visual artists with inspiring the modes of audience engagement he utilizes to induce emotional responses to and conversations about the meanings of blackness.

How post-black performance can reshape our understandings of racial freedom is at the center of the next two chapters. Ilka Saal, in “Performing Slavery at the Turn of the Millennium: Stereotypes, Affect, and Theatricality in Branden Jacobs-Jenkins’s Neighbors and Young Jean Lee’s The Shipment,” employs theories of theatricality in her reading of two plays, Jacobs-Jenkins’s Neighbors (2010) and Lee’s The Shipment (2009). Both playwrights use racial stereotypes to implicate the audience in the construction and performance of race on stage. This works as an affective tool to both highlight the fraught relationship contemporary spectators have with the history and representation of slavery and to dislodge negative stereotypes about blackness. Malin Pereira’s essay, “Thalia Moss’s Slave Moth: Liberatory Verse Narrative and Performance Art,” focuses on Thylias Moss’s 2004 novel Slave Moth and the various performances Moss has staged to supplement the story. The protagonist is adept at using critical thinking, writing, and imaginative play to form her own identity and to free herself from the bonds of slavery. Pereira refers to Moss’s work as a “liberatory narrative,” which questions accepted truths about slavery, challenges strict definitions of black womanhood, and promotes “boundaryless artistry” (162, 169).

Finally, in “Plantation Memories: Cheryl Dunye’s Representation of a Representation of American Slavery in The Watermelon Woman,” Bertram D. Ashe credits Dunye and her 1996 film with having a “post-black sensibility” (184). He draws attention to how her use of allusions to slavery disrupts the viewer’s understanding of history via repetition, calling them “allusion-disruption gestures” (184). Dunye’s use of imitation to confuse and collapse what is past and what is present forces the viewer to consider the lived realities of slavery and the impact that images have on the stories we perpetuate about black antebellum experience. Dunye also “blaxplores” intersectional black womanhood, particularly lesbian subjectivities, by filming herself (in character as Cheryl) in conversations about black cultural and romantic expectations.

There is a sense of both optimism and urgency in Slavery and the Post-Black Imagination. With the removal of the proverbial wool from the eyes of many Americans and a growing public awareness that we are not in a post-racial moment, there is an opportunity to really promote dialogue about the boundless possibilities for black lives and experiences. This collection of essays and interviews effectively defines and redefines post-black as a concept, applying the term and its associated meanings across a spectrum of case studies to reinforce the idea that post-black cultural output is varied and widespread. In this way, the anthology mimics the attempts of black people and artists across time and space to creatively and tirelessly push both collective black culture and unique black identity to the fore. The inclusion of interviews is a thoughtful choice; hearing directly from the artists creating post-black work makes for a more comprehensive experience between the book and the subject matter. I recommend Slavery and the Post-Black Imagination to all, especially those interested in popular and visual culture, African American studies, and American studies.

About the Author(s): Sadé Ayorinde is a PhD candidate at Cornell University