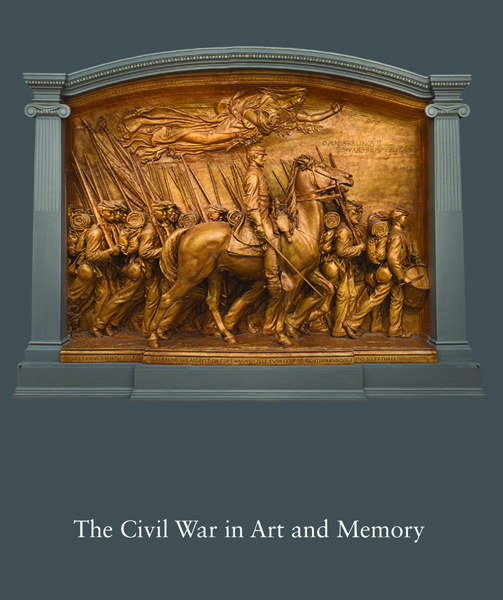 n a collection of essays on Civil War visual and material culture, Kirk Savage wastes no time focusing the reader on the present, as he writes in the first line of his introduction: “Large parts of the world are beset by Civil War, or have been in recent years. They do not have the luxury of contemplating war’s horrors from a distance.” (1) This perhaps unexpected preoccupation with contemporary struggle follows a preface by Elizabeth Cropper, Dean at the Center for Advanced Study in the Visual Arts, in which she introduces the 2013 exhibition that inspired the essays to follow: Tell It with Pride: The 54th Massachusetts Regiment and Augustus Saint-Gaudens Shaw Memorial, organized by the National Gallery of Art and the Massachusetts Historical Society, but also references recent racial unrest in Charleston, South Carolina; Baltimore, Maryland; and Washington, DC. These are not singular moments used to point out parallels between the past and present, but are only the first instances where the contributors to this volume frame their arguments, at least in part, by making allusions and sometimes direct references to contemporary social struggles. If the reader does not expect a volume on Civil War culture to reference the current American racial unrest and the Black Lives Matter movement, or anticipate that the 2013 United States Supreme Court rulings on same-sex marriage would be an orientation point for understanding nineteenth-century America, then this volume aims to dramatically expand their view.

The gathered essayists, although predominantly engaged in the act of historical analysis, wish the reader to keep one foot in the past and one in the present. Their goal is to provide a continually evolving and even living context for reappraising this most commemorated of American wars, to challenge some of the romantic mythos of war and reconciliation, and to argue that the energies that gave birth to the war never went away—energy is always conserved, after all. Instead, these powerful beliefs and practices changed form, mutated into new social and political structures suited for survival in postwar America. As Savage clearly explains in his introduction: “Each essay is designed to engage directly with the historical shadow of slavery and with the two twin legacies of white supremacy and racial conflict, which have marked American society across all its cultural forms.” (2)

By and large, this collection succeeds in its goals by digging into the deep ambiguity in the frozen narratives of some well-known monuments, such as the Robert Gould Shaw Memorial by Saint-Gaudens (1897; Boston) and exposing the willful suppression of history and continuing racial conflict in the hagiography visible in others (The Robert E. Lee and Stonewall Jackson windows in the National Cathedral). Other authors provide thoughtful, deep analysis of lesser-known objects such as popular illustrations of the New York Draft Riots and antebellum portraiture of interracial families. These essays are perhaps even more effective in piercing the popular mythos of the Civil War: they offer nuanced, complicated, and wholly believable views into a time and place agitated by frustration, fear, and anger. In these essays, the reader glimpses a world that is all too familiar, one struggling to come to terms with its past and straining to accept new definitions of self in the face of legal, social, and cultural evolution.

Savage organizes the essays around seemingly simplistic tent-pole concepts, dividing the volume into designated sections: Home, Battlefield, Public Space, and Heroism. These broad categories allow for a certain amount of conceptual slippage. For example, the first section, Home, contains three excellent but very different essays, as Gwendolyn Dubois Shaw analyzes portraits of interracial families, Dana Byrd discusses experiments in planning communities for freed slaves, and Joshua Brown examines popular illustrations of the New York Draft Riots of 1863 as a significant moment where the popular perception of blackness was under review. As such, one essay approaches the theme of home through familial structure, one looks at house and community, while the last engages with the concept of the home front, as wartime ideologies are fought out away from the battlefield. At the same time, powerful analyses also emerge in the dialog between these categories. For example, Brown eloquently positions his reading of the Draft Riot illustrations within a historical context newly energized by the enlistment of black soldiers and their subsequent heroism. Immediately after Brown’s essay, in the section on battlefields, James Oakes and Richard J. Powell unpack the history of black enlistment along with the symbolic and iconographic evolution of the black soldier. There are other similar synergistic moments in this volume, where the authors illuminate one another’s arguments even when discussing very different artifacts. The effect is a collection of essays which could certainly stand on their own, but which should be read together for maximum effect.

The most profound example of this loose but effective continuity, the way common threads connect between diverse essays, is the continual presence of Saint-Gaudens’s Shaw Memorial. This is not surprising as these essays emerged from a symposium organized around an exhibition of the painted plaster version of Saint-Gaudens’ masterpiece, on long-term loan to the National Gallery of Art in Washington, DC. While the essays that predominantly engage the Shaw Memorial are presented together in the final section of the volume on Heroism, the famous memorial to the Massachusetts 54th appears throughout as a conceptual anchor for approaching the issues of commemoration and as an accepted masterpiece of American art. Most of the authors introduce the Shaw Memorial at one point or another, but even where it does not play a primary or secondary role in an author’s argument, it is a looming specter in the discourse. As Savage left the final section of the book for a multifaceted, multi-author examination of the memorial’s complicated and ambiguous character, it is literally anticipated throughout the volume. The essayists present the memorial again and again in brief views from various angles, holding the reader in suspense until the final act.

This anticipation is rewarded with a nuanced reading of the Shaw Memorial, including in Charles Karelis’ excellent discussion of the complicated racial ambiguity of the sculpture. Karelis presents competing arguments allowing those who support the memorial as a socially progressive statement and those who see only persistent racial hierarchy to have full representation. Ultimately, the author crafts a convincing analysis that synthesizes these seemingly incompatible views, arguing that while progressive ideals are evident in the horizontal motion of the work, and its vertical organization reveals its striking conservatism. For Karelis this is not a paradox but instead is evidence of a work that is, “ambivalent, like Saint-Gaudens the man and like America itself at the time.” (211)

While this volume effectively achieves its goals—questioning the mythos that has grown around the war as commemorated in public memory and refocusing the history of the war on racial inequality—some readers may find the loose organization around slippery constructs like Home or Heroism to provide too little cohesion for reading the essays as a unified collection. This is not, however, a serious detraction. As is always the case with collections such as this, many readers will pick and choose essays that pertain to their interest or research and avoid others. While those who do so will be rewarded with compelling and thought-provoking arguments, worthwhile connections are available to those who pursue this collection as a whole. The individual chapters provide new ways to look at old objects, introduce little-seen artifacts, and expand the temporal scope of Civil War studies to include the present.

One example of an essay that may, for some readers, strain against the scope of this volume, is the wonderful exploration by Shawn Michelle Smith of contemporary photographer Sally Mann’s photography of the Civil War battlefield at Antietam. Mann’s photographs, created with the wet-plate photographic process typical of the period, conceal much of the landscape and result in dark and mysterious prints of undeniable aesthetic power. They are moody, even terrifying, especially once Smith couples the Antietam photographs with Mann’s contemporaneous wet-plate studies of decaying human corpses at the Forensic Anthropology Center at the University of Tennessee. At this “body farm,” corpses donated to science decay in natural surroundings, allowing researchers to study the processes of human decomposition. Like the Antietam series, they are contemplative in their richness, as the textures of decay beautifully and chillingly emerge from dense layers of exposed, sticky photographic emulsion. Linking these photographs to the Antietam series (Mann herself exhibited them together) allows Smith to approach the famous photographs of the war by Alexander Gardner. His images were often full of corpses, and while they forever changed the public awareness of wartime violence, they have also become a powerful tool in romanticizing our collective memory of the Civil War. Conversely, Mann’s battlefield pictures lack corpses, which must then be found in another location, at the body farm. Mann restores the dead to the battlefield in challenging images that were made in long-hallowed spaces, hoping to reengage with the war’s legacy of death instead of merely its popular patriotic qualities.

Smith thoughtfully examines Mann’s striking photographs. Without question, this essay expands the reader’s experience with Civil War visual culture by making a compelling argument for continually reappraising the long shadow of the war on American culture. At the same time, some readers may not buy into such a broad view and will question how Mann’s photographs, particularly those from the body farm, contribute to a discussion of how Americans commemorate and memorialize the past. Reading the whole text instead of simply selecting individual essays resolves this concern. Smith’s essay, compelling in its own right, follows Savage’s discussion of what he calls “the unknowable dead.” Savage begins not with memorials and ritualized tombs of unknown soldiers, but with the 1862 Gardener photograph, Contrast! Federal Buried, Rebel Unburied, Where They Fell at the Battle of Antietam, which displays an exposed and unidentified Confederate corpse alongside the grave of a named Union soldier. Read in context, Savage and Smith together consider how corpses, visible and invisible, present and merely implied, participated in creating the symbolically rich yet contested space of the battlefield, as it existed in the historical past and as it is reexperienced and continually reinscribed with meaning in the present.

The Civil War in Art and Memory largely succeeds in a multifaceted balancing act. Kirk Savage as editor has chosen exceptional essays that can each stand on their own, but also compliment each other to become a vital conversation on what the Civil War is still becoming, how its battles continue to be fought in our collective memory. At the same time, each author weighs the past against the present. Their purpose is not simply to acknowledge that we are a product of our collective history, but to argue that nineteenth-century beliefs, struggles, and battles are not consigned to the past; we are not haunted by ghosts, but by our consciences, troubled by our own participation in literal battles over race, personhood, and human dignity. The Civil War is of the present—when legal battles rage over the right to marry or when actual violence erupts in our city streets. Essays like these are not merely works of historical analysis, but deep interrogations of America’s political self.

PDF: Savage – The Civil War in Art and Memory

About the Author(s): Kenneth Hartvigsen is Curator of American Art at Brigham Young University Museum of Art.