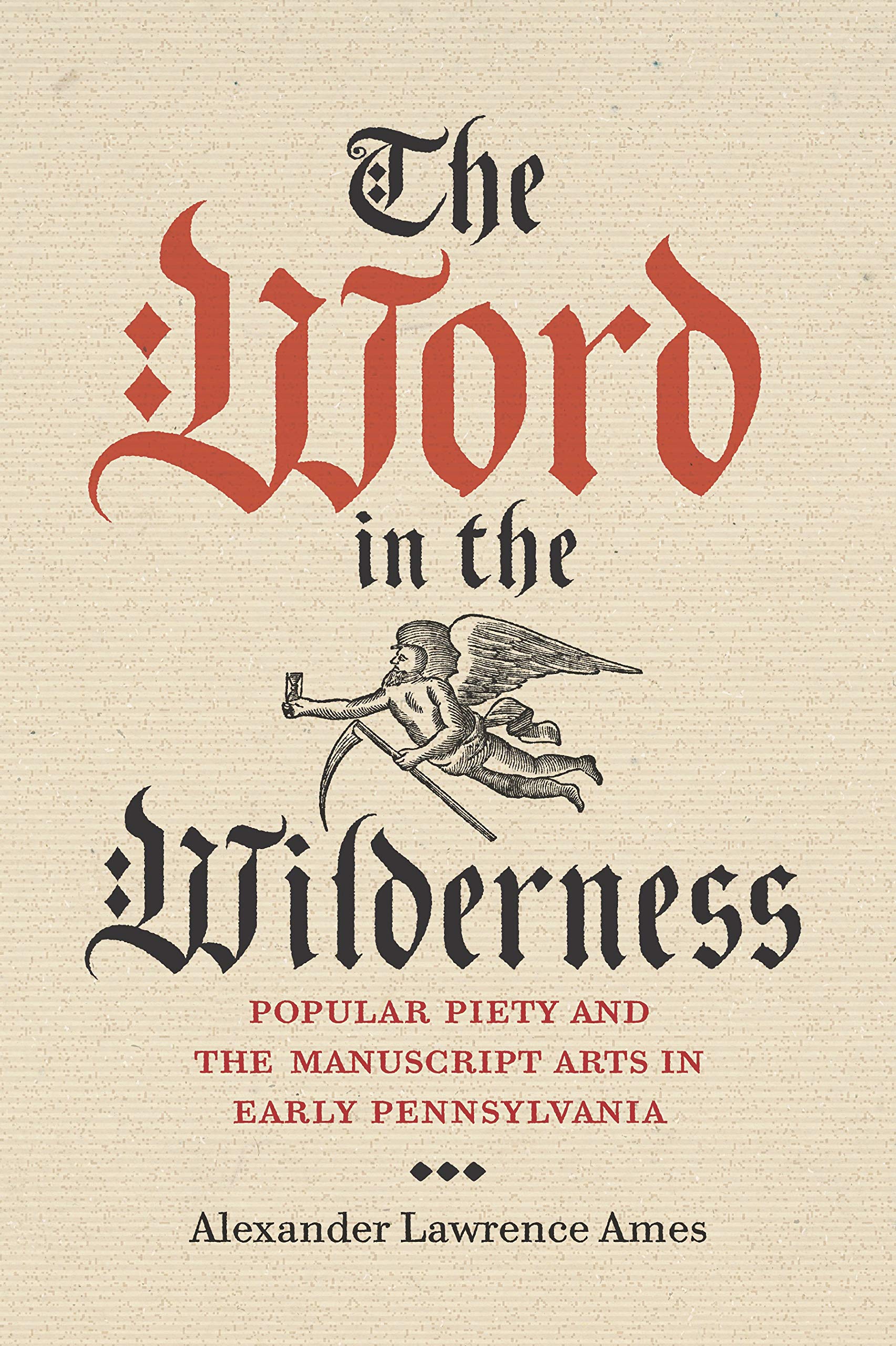 The Word in the Wilderness is a book about, in general, objects that American art historians call “fraktur,” the illuminated manuscripts made by predominantly German Protestants who settled in Pennsylvania in the seventeenth and eighteenth centuries and who continued this practice into the nineteenth century. Part of Ames’s argument is that these works that blend the calligraphic writing of religious texts or reflections alongside illumination do not sit neatly within our inherited disciplinary boundaries. A new approach is needed. He frames this approach as a new “sectarian” or “Pietist” paradigm that captures the Pennsylvania religious immigrant experience in a holistic way, claiming that it needs to be a major part of the way we narrate religion and immigration in the colonial and early national periods. While the Puritan (New England), Quaker (Mid-Atlantic), Catholic (Maryland), and Anglican (Mid-Atlantic and Southern) religious framing of early American denominational history is familiar, the diversity of the Pietistic sectarian immigrants of rural Pennsylvania can be confusing, and they have often been left out of the story. This is a shame, Ames notes, because the visual and material cultural record of this population is vibrant, deep, and complex, even flamboyant, and surely worshipful. Ames argues that these objects are a “materialized quest towards spiritual literacy,” by which he means that they taught people piety, akin to the way the Rosary is used in Catholicism (12). But unlike the Rosary, fraktur consists of manuscripts that taught by being made, that formed hearts by being formed themselves. Ames is explicitly informed by the “lived religion” school of American religious studies, and his desire to bring this perspective into material culture and art-historical study is most welcome.

The chapters follow a compelling trajectory. The first chapter, “Heaven is My Fatherland,” deals with the ways primarily German immigrants thought about the Word of God as a transnational, even cosmic, medium of spiritual experience. The second, “The Spirit of the Letter,” demonstrates connections with European devotional manuscripts. The final three chapters, “Worship Always the Scripture,” “Incense Hill,” and “Marching to ‘Step and Time,’” are much more engaged with the original materials than their contexts. Here, Ames details how these objects became models of pious living in educational settings, vibrant participants within networks of music and sociability, and markers of major life-cycle events. Ames does not refute our current understanding of fraktur objects but instead broadens it, and in doing so, he significantly changes our perceptual framework.

Historians who are deeply immersed in the worlds of American religion, early American history, material culture, and art often find these cognate fields at odds with each other. In print or at conferences, scholars frequently express frustration about an overreliance on formal analysis, worries about disaggregating religious content from form, and concerns about the problematics of “folk art” in scholarly and museum divisions. The concern is over art historians of religious objects who know too little about religious thinking and scholars of religious studies who know too little about art and art history. This book is a welcome demonstration of the ways these occasionally dissonant spheres of knowledge can be fruitfully brought together.

Throughout The Word in the Wilderness, Ames evinces the academic immersion in the scholarly debates and historiographical issues that linger in these fields. But he also demonstrates the practical, tactile knowledge of someone who has firsthand experience with collections material. The collections he consults are major regional and national repositories (such as the Winterthur Library and Museum, the Pennsylvania Historical Society, and the American Antiquarian Society), as well as more sectarian special collections (such as the Moravian Archives and the Mennonite History Center). That sensibility is evident in his treatment of the images he illustrates, which are as much a part of the argument as the text. He engages them formally, through visual analysis, but also historically, in terms of situating the objects in time, space, and culture. Ames urges scholars in the abovementioned fields to think outside formal analytical categories of fraktur, which shape the interpretations we often encounter in major museums (such as the Museum of Fine Arts in Boston, the Philadelphia Museum of Art, and the Art Institute of Chicago, to name a few) and walk into the spiritual and lived religious engagement with the Word.

Ames theorizes his concept of the Word in a very specific way that his subjects, I believe, would have understood. At the core is the Christian theological concept of the logos, which echoes Greek philosophy and the Hebrew Bible and which is famously expounded upon in the first chapter of the Gospel of John. Logos is translated as “Word,” which means a physical but also textual manifestation of God’s revelation of God’s self. Ames explains the concept in five ways. First, he notes that “Protestants viewed the words of scripture not primarily as descriptive of the reality of their religion but as creative of its truths here on earth” (10). Second, engagement with the Word was highly personal and necessary for spiritual growth and discernment. Third, the Word was an object of study and required linguistic and interpretive labor. Fourth, the Word became a “form of visual artwork capable of deep spiritual expression and the subject of intense veneration” (10). Fifth, fraktur were artifacts of social and community exchange, building bonds of reciprocity much like the theoretical framework Marcel Mauss describes in The Gift.

Ames’s winsome book gives us a window into understanding why the manuscript objects of these sectarian Protestants require multidimensional analysis. He proves that we need to know something about the theology of reading and writing in Pietistic Protestantisms to understand where fraktur came from and what these early Germanic immigrants were trying to achieve with the practice. And here is the challenge that Ames’s expansive methodology poses to our field: you do need to understand the contours of the Reformation efforts of sixteenth-century Europe, medieval spirituality (including premodern theories of illuminated books), the deep connection between literacy and mysticism, and the sectarianism of the diverse Central European immigrants to Pennsylvania. In short, to understand these works, our minds need to expand beyond the water’s edge (for which the Atlantic World paradigm has long argued), as well as the chronological edge. These cultural streams were not severed by the Atlantic Ocean, and by Ames’s reckoning, they do not stop until well into the nineteenth century. Our research needs to expand into fields that many scholars previously have ignored. Reading and writing, as Ames demonstrates, is not simply means of information intake and output but an aspect of the formation and reformation of the spiritual self with a deep history.

Thankfully, the material proof is overwhelming that these texts mattered deeply for many of Pennsylvania’s immigrants. This is why we have such a rich and beautiful trove of surviving works. And you sense real gratitude on Ames’s part for the early collectors who found and cared for these amazing written and illuminated objects, often in the garrets and corners of Pennsylvania farmhouses, which made this kind of study possible. These are the kind of people some scholars dismiss as mere antiquarians, but Ames treats them with respect. Early collectors and Pennsylvania history and book enthusiasts, Samuel Whitaker Pennypacker (1843–1916) and Henry Chapman Mercer (1856–1930) here receive overdue praise for gathering and appreciating this written material and visual culture. My only regret about this book is that I wish it included color images, although what is presented throughout in black and white is quite engaging. There is a companion website, which is a trend in the field that I am happy to see growing (https://www.wordinwilderness.com). Perhaps a scholarly coffee table book or exhibition with a resplendent catalogue is in Ames’s future? But when you see the color images online, the experience is surely different. The colorful foliage that enmeshes gothic script, the painstaking detail of the written forms, the natural imagery that makes these objects come alive blooms in front of you. In the copies of sacred text, the baptism certificates, the exercise books, and the penmanship samples (Vorschrift), the color and detail tell their own story as labors of love and expressions of loving the Word.

I can attest that, having read this book, during a recent visit to an art museum, I saw the examples of fraktur on display in a different way. I could see the life and the heart of the people that made them, exchanged them, and formed cohesive communities through the shared understanding of these calligraphic exuberances. Through formal and informal means, these early immigrants to Pennsylvania from Germanic lands lived lives of expressive spirituality and made exceptional objects. However, I did wonder what made these objects fade from cultural value or use. Why was Pennypacker able to scoop them up from estate sales and attics so easily? It seems beyond the simple intergenerational abandonment of the German language, for example. Ames quotes a Mennonite scholar from the 1970s who seems to wistfully wonder about the same question; it is nice fraktur was collected, but he asserts that “the key to the Fraktur lies in the texts,” which are windows into these early people’s spiritual lives (175). But what does it say about twentieth-century Mennonites that they have stopped this practice? Was it a general Protestant ecumenism that downplayed cultural particularity? The Americanization of early ethnic communities? Was it a loss of belief in the formative and pedagogical power of writing? Loss of belief entirely? Ames admits that the answers to these questions fall outside the scope of his book and that much of that story will be left to “later scholarship” (158). But he does hint at possible answers. He identifies “industrial printing” as being particularly toxic to the culture of fraktur, because nineteenth-century print technologies increased the speed, convenience, and volume of textual production, which “may have shifted the cultural balance away from the time-consuming, if beautiful, artistic practice of rendering text by hand” (159). Fraktur represented a print and manuscript culture largely unchanged since Gutenberg’s time. A second major reason is Pennsylvania politics, especially around nascent public schooling. Although reluctant to participate in Anglophone public schooling, Germanic sectarian communities were able to retain their German-language parochial schools until 1854, when the state required free public schools in every township, “thus bringing a forceful end to any continued reticence” (160).

Ames has set up a framework for early manuscript studies that bridges the German-speaking Atlantic. I look forward to a sequel. I will be adding Ames’s book to my syllabi going forward because I think he does an excellent job helping his readers to stand in his historical subjects’ proverbial shoes and understand the legibility of committing religious belief to paper.

Cite this article: Christopher M. B. Allison, review of The Word in the Wilderness: Popular Piety and the Manuscript Arts in Early Pennsylvania by Alexander Lawrence Ames, Panorama: Journal of the Association of Historians of American Art 8, no. 1 (Spring 2022), https://doi.org/10.24926/24716839.13325.

PDF: Allison, review of The Word in the Wilderness

About the Author(s): Christopher M. B. Allison is Director of the McGreal Center for Dominican Historical Studies at Dominican University.