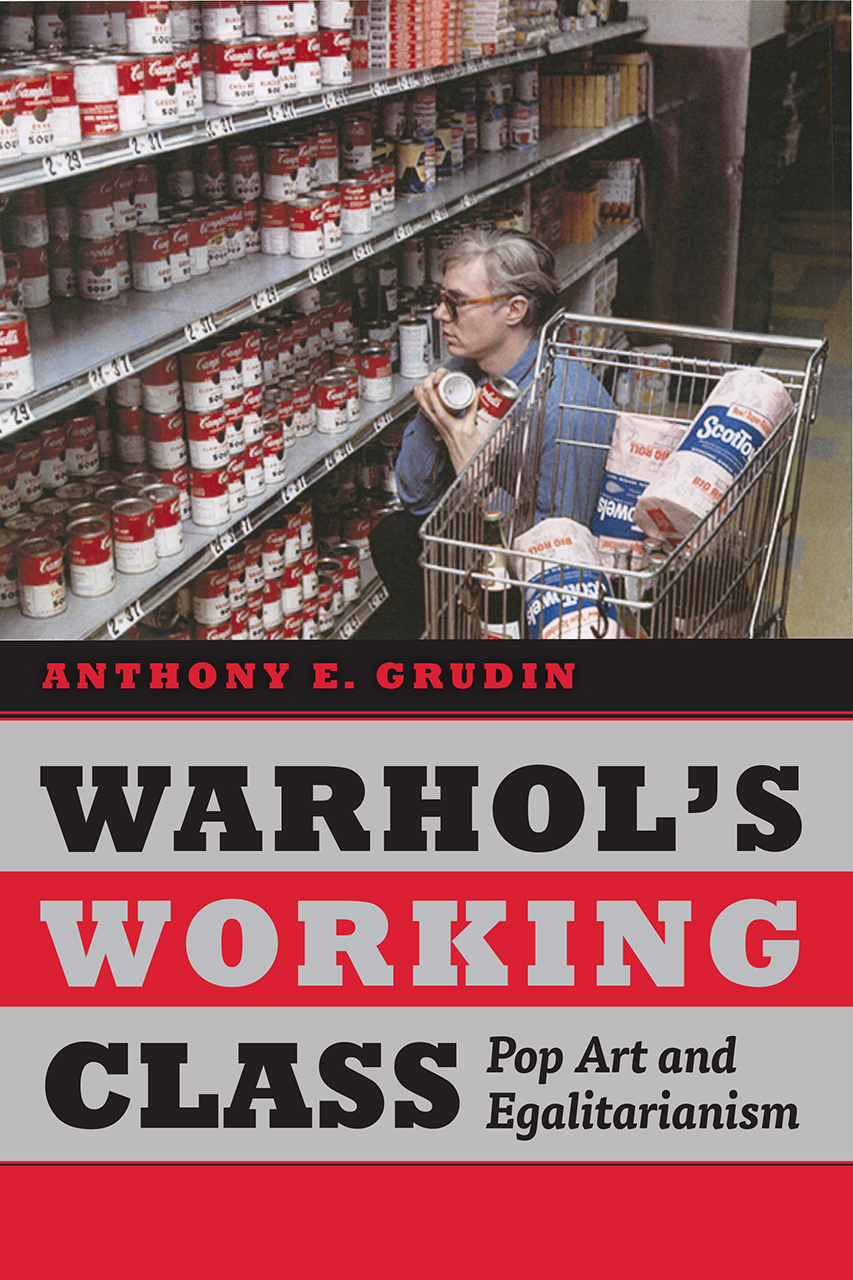 Although Andy Warhol died over thirty years ago, his relevance only seems to grow with time. He is the archetypal Pop artist, yet he expanded beyond that movement by leveling distinctions of high and low across art, film, music, video, graphic design, and fashion. It is nearly impossible to think our present-day social media culture without him; his most often-cited aphorism, “in the future, everyone will be world-famous for fifteen minutes,” now reads like prophesy.1 After a half century of Warhol scholarship, encompassing countless monographs, dissertations, articles, exhibitions, and several catalogue raisonnés, one could be forgiven for thinking that there was some interpretive consensus surrounding his oeuvre. Yet, as the implication of Warhol’s famous prediction sinks in—namely that media culture offers participation and exploitation as two sides of the same coin—the divisions in Warhol scholarship have grown stark: is Warhol the quintessential postmodern cynic, celebrating a superficial world of appearance and symbolic exchange, or is he a covert realist bent on exposing the fault lines of class, sexuality, gender, and race occluded by consumerist ideology?2 Indeed, it would not be too much to suggest that this debate has been at the crux of the contest between poststructural and social art-historical methods that have shaped “the new art history” of the last forty years. Among the newest titles arguing for Warhol’s social relevance is Warhol’s Working Class: Pop Art and Egalitarianism by Anthony E. Grudin.

Grudin’s focused volume is animated by the insight that Warhol’s early work staged the fundamental American ambivalence surrounding class conflict by simultaneously reflecting a working-class vision of upward mobility through cultural participation, a bourgeois taste for slumming, and disavowal of privilege. Grudin contends that Warhol’s newsprint paintings and brand icons tested an egalitarian aesthetic against the realities of social and political hierarchies and the ideals of the so-called American dream. He supports this claim by mapping the rise of consumer culture onto the early phases of neoliberalism, defined as the program of commodification, deregulation, union busting, and austerity, which supplanted New Deal policies with the notion that “fixed classes were a mirage, mention of class taboo, and status [was] the product of individual achievement” (8). Grudin invokes Jacques Rancière’s controversial notion of the “distribution of the sensible”—the aesthetic system of inclusions and exclusions that delimits democratic participation—as a political horizon of Warhol’s work.3 But Grudin is careful to distance his claims from any political views Warhol may have held (one could easily construct a reactionary Warhol from his quotations), so that the legendary ambivalence and inscrutability of his subject emerges as a reflection of the class disavowal demanded by the twin neoliberal ideologies of freedom and individual creativity.

In his first chapter, “Varieties of Pop,” Grudin hones in on what distinguishes Warhol from his Pop contemporaries. Warhol’s Carpatho-Rusyn immigrant roots in Pittsburgh and his insider experience of the 1950s advertising industry precluded the privileged contempt for mass culture exemplified by some of his contemporaries. For instance, Grudin sees a desublimation of consumerist desire in Claes Oldenburg and Patty Muschinski’s artisanal commodities and detumescent monuments, and disdain for the popular vulgarity of the comics that Roy Lichtenstein aestheticized in his paintings. (Lichtenstein is a bit of a straw man in this argument; as Michael Lobel has shown, his use of mechanical devices displays an ambivalence comparable to that of Warhol.4) Instead, Warhol’s earliest “hand-painted pop” works imperfectly reproduce product packaging and brand labels with the now all-too familiar compulsory affect of alienated “liking.” In this chapter, one senses Grudin forming his interpretive method around the ambivalence he discerns in Warhol’s practice: having cited Rancière in his introduction, Grudin now invokes Guy Debord’s vision of a tautological spectacle culture of incessant affirmation “which says nothing more than ‘that which appears is good, that which is good appears.’”5

In chapter two, “Warhol’s Participatory Culture,” Grudin focuses primarily on Warhol’s hand-painted newsprint works from 1961, a period when he was still working as a graphic designer. This work has rightly fascinated scholars for the tensions it sets forth between art and advertising, the gesturalism of Abstract Expressionism, and the mechanization of what would become known as Pop art, and for the body issues and sexual anxieties that are closer to the surface here than in later works. The famous episode of Warhol’s presentation of the two Coca-Cola bottle paintings to counterculture filmmaker Emile de Antonio in 1962, one including gestural marks, the other hard edge (de Antonio replied: “the abstract one is a piece of shit, the other is remarkable”) has framed his transition to painting as motivated by a desire to supersede Abstract Expressionism and its heteronormative exclusions.6 However, as Thomas Crow has recently shown, Warhol’s transition to painting had just as much to do with the shift in the advertising industry from hand-drawn to photographic illustrations that threatened his professional prospects. Warhol’s gambit was to reproduce this shift in his paintings, thereby opening art to mass cultural imagery and embarking on a new career.7 Grudin deepens our understanding of this transition by examining the comic book sources for paintings such as Superman (1961; private collection) and the advertisements for correspondence art courses that they contained. These courses peddled myths of social and cultural advancement, challenging working-class audiences to test their drawing skills against the Ben-Day dot–printed images in the comics. The mass image, in other words, was the aspirational image that remained beyond the reach of manual reproduction. Grudin charts this duality of hand and print in a fascinating discussion of Superman, a painting that Warhol used as a backdrop in a 1961 Bonwit Teller window display of women’s clothing and later reworked by adding gestural crayon scrawls and painting over portions of the text in Superman’s thought bubble. Grudin argues that “the late additions constituted a determinate reassertion of handmade participatory culture against the industrially depersonalized tone that otherwise characterizes the image” (55). This is an incisive observation, but Grudin elides the differing contexts for the two moments of the work. The painting functioned as decor when displayed in the department store window; it was designed to be observed from a distance and avoid competition with the dresses on display. The added scrawls mark its prospective transition from design into art, a threshold that was clearly on Warhol’s mind at the time.8 The later additions to Superman and other paintings shown in the Bonwit Teller window affirm a counter-mythic embrace of participatory culture, but their marked transition from decor to painting, made before de Antonio’s 1962 lesson, complicates Grudin’s nuanced but essential claim that “at its best and most incisive, Warhol’s was not fundamentally an art about the history or ontology of fine art; it was at least as much an art about the nature and possibility of participatory culture under neoliberalism” (39).

However fecund the comic book and newsprint images that Warhol reproduced in his earliest paintings, they lacked the universality of the brand icons that would soon preoccupy him. This universality was the product of an early 1960s brand marketing scheme to stimulate working-class consumption and fend off lower-priced generics. The working class of the early 1960s was squeezed from both the production and realization ends of the market: much of the economic boom of the late 1950s and early 1960s flowed from the decrease in real wages as neoliberalism began its assault on labor and its institutions, and overproduction had to be fended off through mass consumption at home and abroad.9 In chapter three, “Warhol’s Brand Images,” Grudin unearths a series of advertisements run by Macfadden Publications in the New York Times calling for firms to market to mass, not middle-class, consumers by promoting what Jean Baudrillard called the “sign value” of their products.10 Brands like Coca-Cola peddled specious icons of social status with the notion that “good taste (the taste of the soda) became ‘good taste’ (high-status taste)” (100), thereby “produc[ing] visual images that are ‘branded’ into consumers’ minds” (80). Building on the argument of the previous chapter, Grudin links this marketing push to the homespun brand images made by a proletarian subject “who could value the image of a soup can or a cola bottle enough to want desperately to reproduce it but who doubted his ability to get it right” (103). At the same time, the author acknowledges that Warhol’s success cultivated the universalization of the brands he took up by creating a feedback loop in which art is absorbed by its subject. This glimpse of Warhol as anti-artist raises Benjamin Buchloh’s influential analysis, referenced throughout Grudin’s text, that “to be suspended between high art’s haughty isolation (in transcendence, in resistance, in critical negativity) and the universally pervasive mass cultural debris of corporate domination constitutes the founding dialectic within the modernist artist’s role.”11

Chapter four, “Warhol, Modernism, Egalitarianism,” expands the scope of the book’s argument by connecting a detailed discussion of Warhol’s films, specifically his 1964 ninety-nine-minute portrait of Henry Geldzahler smoking a cigar, to his 1961 comic painting The Little King (Andy Warhol Foundation for the Visual Arts). Linking the class animus of Otto Soglow’s long-running and near-wordless comic to the pathbreaking career of the iconic curator, who ushered Pop into the temple of The Metropolitan Museum of Art, this chapter maps the participatory impetus of the former (readers were known to invent their own narratives for the comic) onto the latter via the sanctifying and annihilating gaze of Warhol’s cinematic lens. Grudin convincingly attributes the vulgarity of each, observed in the awkward foibles of the comic and queer undercurrents of Geldzahler’s portrait, to a desublimation of the modernist “expansion of art beyond all of its traditional boundaries and hierarchies” (111). Challenging the once-prevalent view of Warhol as the ur-postmodern skeptic, Grudin again summons Rancière’s notion that “the aesthetic regime of art” wrests the potential of participation and community—the merging of art and life—from the unidirectional totality of spectacle. Warhol’s Silver Factory was the arena where Superstars, born in the New York underground and encompassing outcasts of almost every description, collided with uptown blue bloods and the prospect of cultural legitimation. Warhol’s recording apparatus exposed subjects and affected viewers, building what Douglas Crimp has characterized as a politics of antivoyeurism from a confrontation with difference.12 Yet many withered before Warhol’s screen tests (Geldzahler’s film ends with him collapsing into a fetal position), confirming that “audiences would enjoy watching a film or a performer who conspicuously failed to approximate the mass-cultural standards she/he/it had set out to achieve” (144). Warhol profited from these flameouts as his collaborators withdrew resentfully, returned underground, or met worse fates. Jack Smith, the wellspring of much of Warhol’s filmmaking style who maintained no ambivalence about capitalism (“clapitalism” in his inimitable argot) and suffered greatly for his nonparticipation, was enraged after their attempted collaborations failed to bear fruit. As one of Smith’s handwritten notes attests, exploitation and resentment were the corollary to visibility in Warhol’s aesthetic:

Aspect of the false art of Warhol.

Let’s not forget that the ESSENTIAL purpose that runs

through REAL art is to

Refresh and elevate the spirit & THAT WARHOL

WILL NEVER BE ABLE TO COPY!13

Grudin’s well-researched and nicely illustrated volume is a trenchant analysis of the class animus that Warhol’s postmodern interpreters often leave hidden in plain sight. And yet he admits that Warhol’s manipulated “signs and stereotypes of class and class belonging” remained just that: simulacra of the class conflict that Marx understood as the material struggle between oppressor and oppressed (8). Instead of a resolution of this paradox, Grudin’s book offers a timely reminder that the contradictions of Warhol’s art are those that neoliberalism is finding increasingly difficult to sustain as massification approaches its limits and profits are hoarded at the top. Warhol’s art historicizes this tenuous brand of inequality, leaving us with the question: after our fifteen minutes are up, then what?

About the Author(s): Liam Considine is a Lecturer at the School of Visual Arts, New York