Fig. 2. Charles Willson Peale’s Exhumation of the Mastodon (ca. 1806–8; left) and The Artist in His Museum (1822; center) as seen through the skeleton of the mastodon in the exhibition Alexander von Humboldt and the United States: Art, Nature, Culture, Smithsonian American Art Museum, Washington D.C. Photo courtesy of Eleanor Jones Harvey

Visitors to Eleanor Harvey’s monumental exhibition Alexander von Humboldt and the United States: Art, Nature, and Culture are immediately confronted with the towering, fossilized skeleton of a mastodon (fig. 1), framed in the entryway by red curtains evocative of Charles Willson Peale’s The Artist in His Museum, also on view (1822; Pennsylvania Academy of the Fine Arts). Revered artist, collector, and Peale Museum founder, Charles Willson Peale and his team of workers unearthed the mastodon skeleton in 1801. It was relocated to the Hessisches Landesmuseum Darmstadt in Germany in 1854, where it remained until recently, when Harvey had it returned to the United States to serve as the symbolic centerpiece of an exhibition rooted in the synthesis of art and science. Standing as the focal point of the surrounding, thematic galleries, the mastodon skeleton is flanked by portraits of Prussian naturalist and explorer Alexander von Humboldt (1769–1859) and Peale, as well as artwork by Samuel B. Morse and Frederic Edwin Church. This layout immediately impresses upon the visitor Humboldt’s extensive network and impact, and it also proclaims the stakes of the exhibition: bringing new meaning to masterworks of American art through the lens of Humboldt and his role in science and exploration. 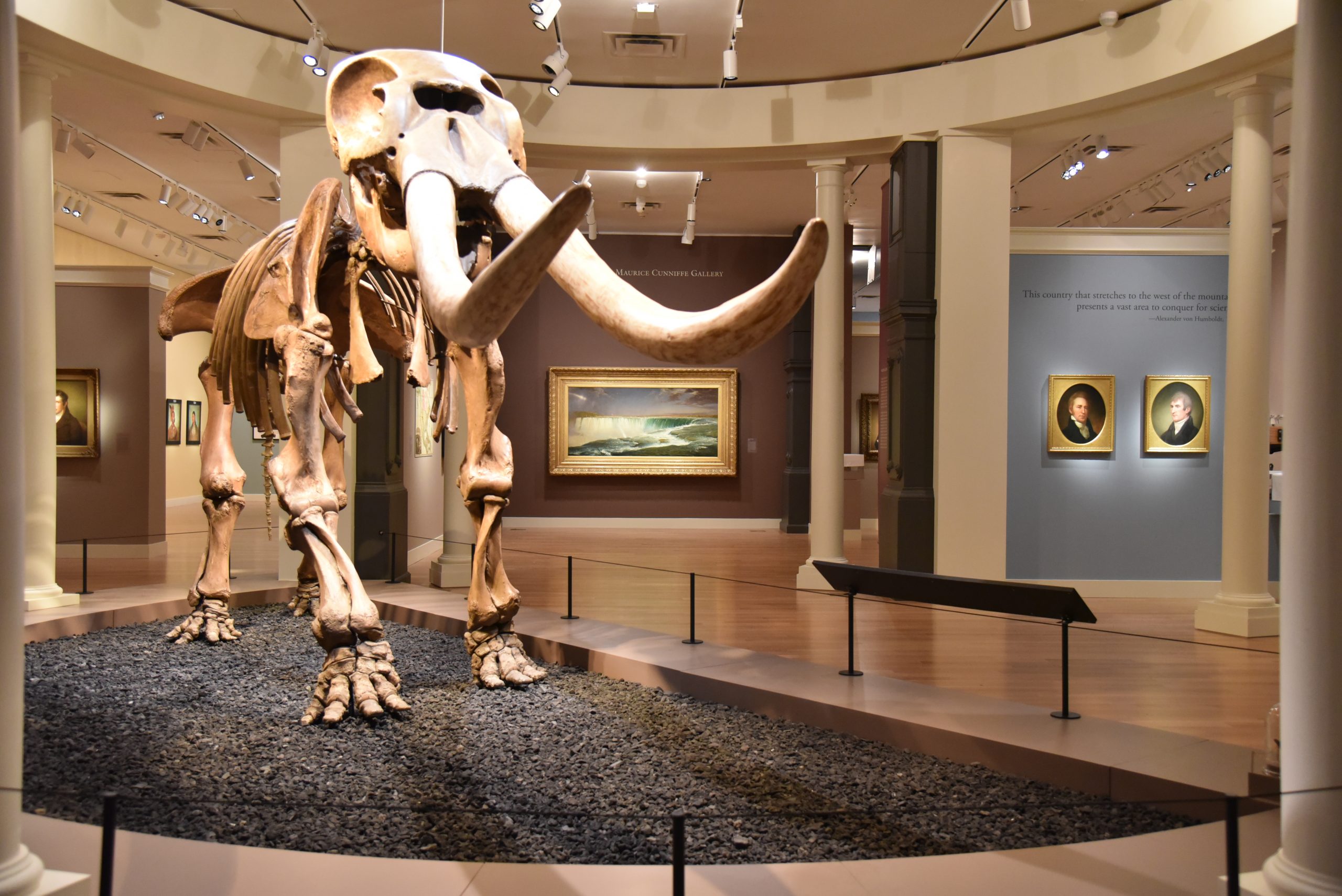 Throughout the exhibition and its accompanying catalogue, Harvey exhaustively delineates the reach of Humboldt, whose travels, research, and extensive social influence and network significantly impacted the culture of the nineteenth-century United States. A fervent advocate for the close observation of the natural world, Humboldt’s research and publications seamlessly merged art and science to argue for what he called the “unity of nature,” an early understanding of the interconnectedness of life on earth that both fostered environmental awareness and resonated with democratic ideals. He was present in the United States for only a six-week period in 1804; nevertheless, the diffusion and generative power of Humboldt’s ideas was remarkably extensive.

Each section of the exhibition—with topics ranging from the expansion of the United States’ physical borders to the growing sensitivity toward cultural differences and human rights—utilizes artistic production to explore the United States’ deepening cultural identification with nature. Humboldt, Harvey argues, was central to this link. The exhibition is divided into seven thematic galleries and includes more than one hundred objects: stunning early maps of the Americas, souvenirs and relics from scientific exploration and technological innovations, and an impressive array of iconic artwork drawn from diverse national and international collections.1 True to Harvey’s zeal for storytelling and years of research, her attention to detail captures Humboldt’s charm and charisma (he referred to coffee as “concentrated sunbeams”!), and exploring the galleries of this expertly organized exhibition is like stepping into Humboldt’s moment in history.

The first gallery addresses the six short weeks during which Humboldt visited the United States and focuses on his newly established friendships with Peale and President Thomas Jefferson, capturing the three men’s eagerness to see the new nation and its democratic system of government succeed. In addition to expanding and mapping the borders of the nation, Jefferson sought to establish the United States as a contender equal to Europe on the world stage, turning to Peale’s recently excavated mammoth, as it was mistakenly called at the time, to symbolize the grandeur of the new nation. Supporting her argument with artwork such as Peale’s Exhumation of the Mastodon (c. 1806–8; Maryland Historical Society)(fig. 2), Harvey convincingly links the United States’ cultural identity to its natural wonders and continues this thread in the next gallery, titled Natural Icons, National Icons, by including work such as Church’s Niagara (1857; National Gallery of Art), whose focus on striking features of the American landscape were interpreted as the embodiment of the country’s ambitious national goals. Through these objects, Harvey also expands on the discourse of Nature’s Nation, arguing that Humboldt played a part in linking American landscape painting with the United States’ political ambitions. 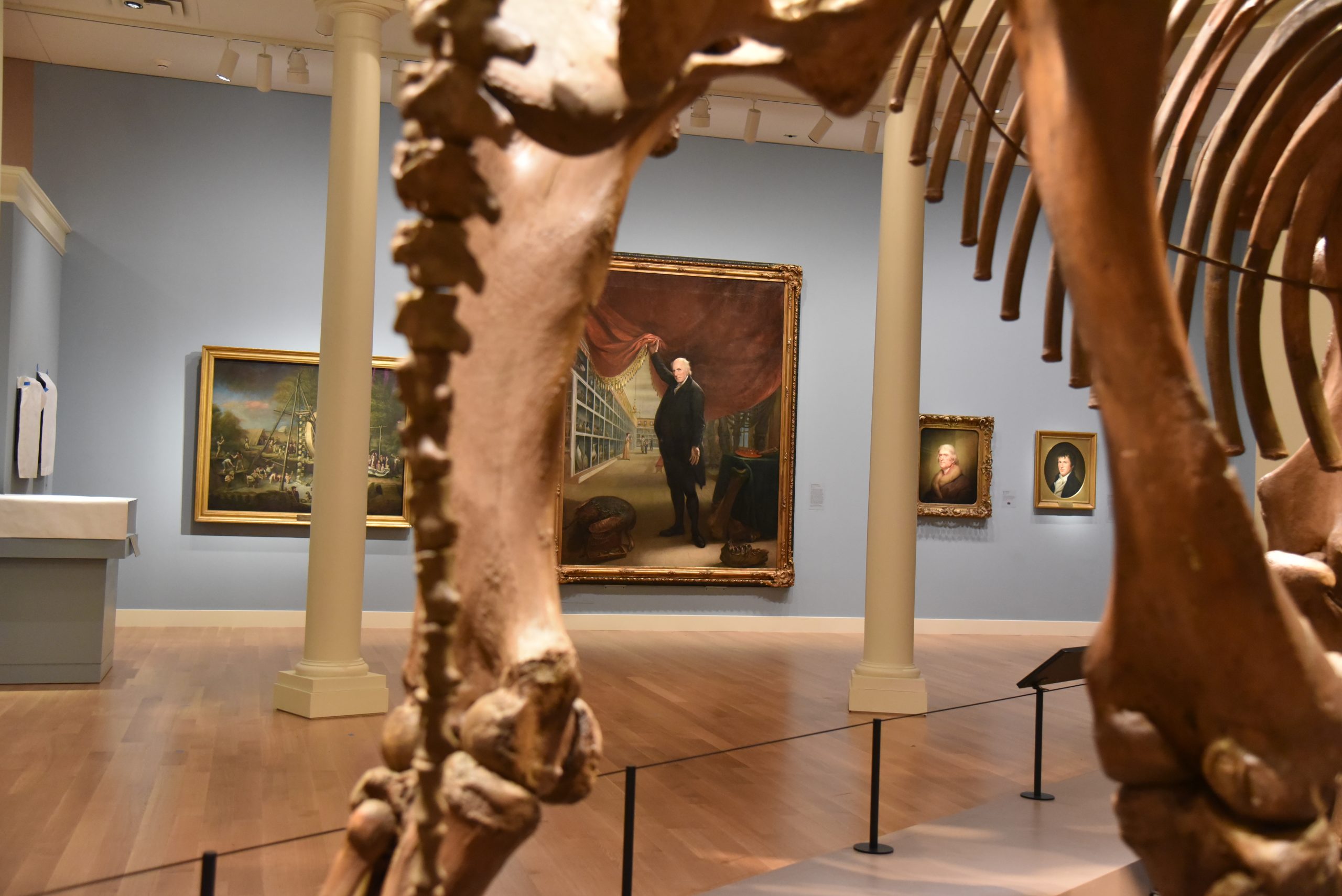 Fig. 2. Charles Willson Peale’s Exhumation of the Mastodon (ca. 1806–8; left) and The Artist in His Museum (1822; center) as seen through the skeleton of the mastodon in the exhibition Alexander von Humboldt and the United States: Art, Nature, Culture, Smithsonian American Art Museum, Washington D.C. Photo courtesy of Eleanor Jones Harvey

Harvey most convincingly argues for Humboldt’s impact on American landscape painting in the section Frederic Church: The “American Humboldt.” Church adapted Humboldt’s observational methods while retracing the Prussian explorer’s path through South America and later producing extraordinarily detailed paintings in an attempt to capture Humboldt’s idea of the unity of nature in a single canvas, most notably in his painting The Heart of the Andes (1859; The Metropolitan Museum of Art). In lieu of borrowing this massive work, a detailed, guided video tour offers the next-best method with which to study the work with the close observation that it demands. Installed in its own theater within the exhibition, reminiscent of the theatrical setting in which it was originally displayed during its sensational debut in the mid-nineteenth century, The Heart of the Andes acts as another centerpiece testifying to Humboldt’s profound influence on the culture of the United States.

Throughout the remaining galleries, it becomes increasingly clear that Humboldt’s influence was vast, stretching from abolitionist efforts in the United States to the founding of the Smithsonian itself. While the gallery devoted to abolition describes explorer and politician John C. Fremont’s and Humboldt’s advocacy for the California landscape, specifically Yosemite, as yet another natural icon, this time of freedom and equality, it neglects to address the environmental exploitation and violence toward Native Americans that occurred during this period. Including this history could have provided a pertinent link to the adjacent gallery, titled Native America, which highlights the work of American artist George Catlin and Prussian naturalist and cultural anthropologist Prince Maximilian zu Wied-Neuwied, who each traveled through the North American interior to study Native American communities.

Unfortunately, before the exhibition even had the chance to open, the ability to tour it in person was necessarily derailed for the sake of public health, prompting an innovative translation of the exhibition galleries to an online platform. Although the doors of the Smithsonian American Art Museum remained closed for several months after the exhibition’s scheduled opening date, its staff rallied to provide the museum’s audience with a host of video tours and virtual lectures, as well as the complete exhibition checklist and label text. Despite these numerous, invaluable online resources, the exhibition still suffered the loss of the close, in-person observation that Humboldt himself would have championed. Some of the nuances of Harvey’s thoughtful curatorial vision are lost when the exhibited objects are flattened and viewed distantly through a screen. It is difficult to study online, for example, the sections of the mastodon skeleton that Charles Willson Peale, Rembrandt Peale, William Rush, and the African American artist Moses Williams added during its reconstruction. The section of the exhibition text that addresses this collaboration is an important inclusion of Harvey’s that nods to Black contributions in an era typically written solely in white narratives. The experience of observing in person the section of the skeleton that Williams helped to restore produces a powerful connection to the life of a previously underappreciated artist that is difficult to achieve through reproductions. More broadly, the immense scale and historical significance of the mastodon itself, as well as the many other impressive objects in the exhibition, are difficult to comprehend when not physically standing in front of them.

The unanticipated timing of the exhibition with the events of the past year prompts a deeper contemplation of Humboldt’s ideas and their application to the present day. Following a fraught presidential election and the raid of the United States Capitol, the exhibition’s emphasis on the United States’ nascent and promising democracy provokes an uncomfortable recognition that the political turbulence and continued lack of equality of today fall short of Humboldt’s ambitious hopes. Perhaps more than she expected, Harvey’s exhibition, timely for its debut during Humboldt’s recent scholarly resurgence, also became an impetus for continued work toward equality.

With this reflection in mind, it is important to note that the exhibition would have benefited from a higher criticality toward the imperial and colonial pursuits in which Humboldt and his work were entangled. In the section Native America, for example, Harvey thoughtfully illustrates Humboldt’s, Catlin’s, and Prince Maximilian’s horrified responses to the violence that took place under President Andrew Jackson’s Indian Removal Act of 1830, as well as their efforts to teach universal respect for Indigenous cultures. Yet there is little to no mention of the preservationist attitudes that drove these collaborations between white artists, white ethnographers, and Indigenous Peoples. In her meticulously researched and beautifully illustrated catalogue, however, Harvey constructs a more nuanced assessment, writing that, “No matter how hard he tried, he [Catlin] could not generate meaningful respect for indigenous cultures.”2 Although the catalogue addresses these concerns to a greater extent, for the average visitor who does not (or perhaps cannot afford to) purchase it, the narrative constructed around Humboldt and his contemporaries in the exhibition itself edges on idealistic. Addressing these issues in the galleries seems especially imperative given the recent movement in the field toward decolonizing museums and exhibitions.

Nevertheless, although the exhibition skirts the darker side of the United States’ formation and expansion, as well as Humboldt’s own privilege, there remains a powerful message to be read in his advocacy for equality and his early recognition of the interconnectedness of nature across borders and cultural norms. Throughout the exhibition, Harvey makes clear that Humboldt’s influence and ideas have stretched far past those six short weeks he spent in the United States in 1804, and the recent attention paid to him in academia, particularly in the field of American art history, only attests to the allure of his ideas. Radical as it was in his time, his theory of the unity of nature recognized the interdependence, fragility, and value of life on Earth, a perception that we in the twenty-first century need to take more seriously in order to grapple with the climate crisis and the ongoing violence against people of color. Harvey’s exhibition, told through visual media, argues for the ability of art to provoke this change, in both Humboldt’s time and in our own.

PDF:Kaufman, review of Alexander von Humboldt and the United States

About the Author(s): Tara Kaufman is Curatorial Assistant at the James A. Michener Art Museum