Art historians and visual cultural studies scholars have long made the case that sitters participate in the making of portraiture, and even scenes.1 Artists and others who create pictures do not make them alone: those who figure in them are participants in a collaborative project, even if the partnership is not equal nor planned in advance. By now, many have seen this photograph taken by Win McNamee on January 6 (fig. 1). In it, Adam Christian Johnson acknowledges McNamee as he balances a podium on his shoulder. Of course, at first, we did not know who he was, although we could see what he was. A thief. A looter. An engaging, white-appearing man, appropriately bundled up for a winter day in Washington, DC, in a hooded, loden jacket and knitted ski cap bearing the name of the then-president and the decal associated with his cardinal number position in the line of Executive Branch Office holders. Johnson’s coat is unzipped, so we can see a scarf that seems to bear a bit of Old Glory’s pattern. Happy and proud with his find, Johnson is a self-aware subject who helps compose this scene. 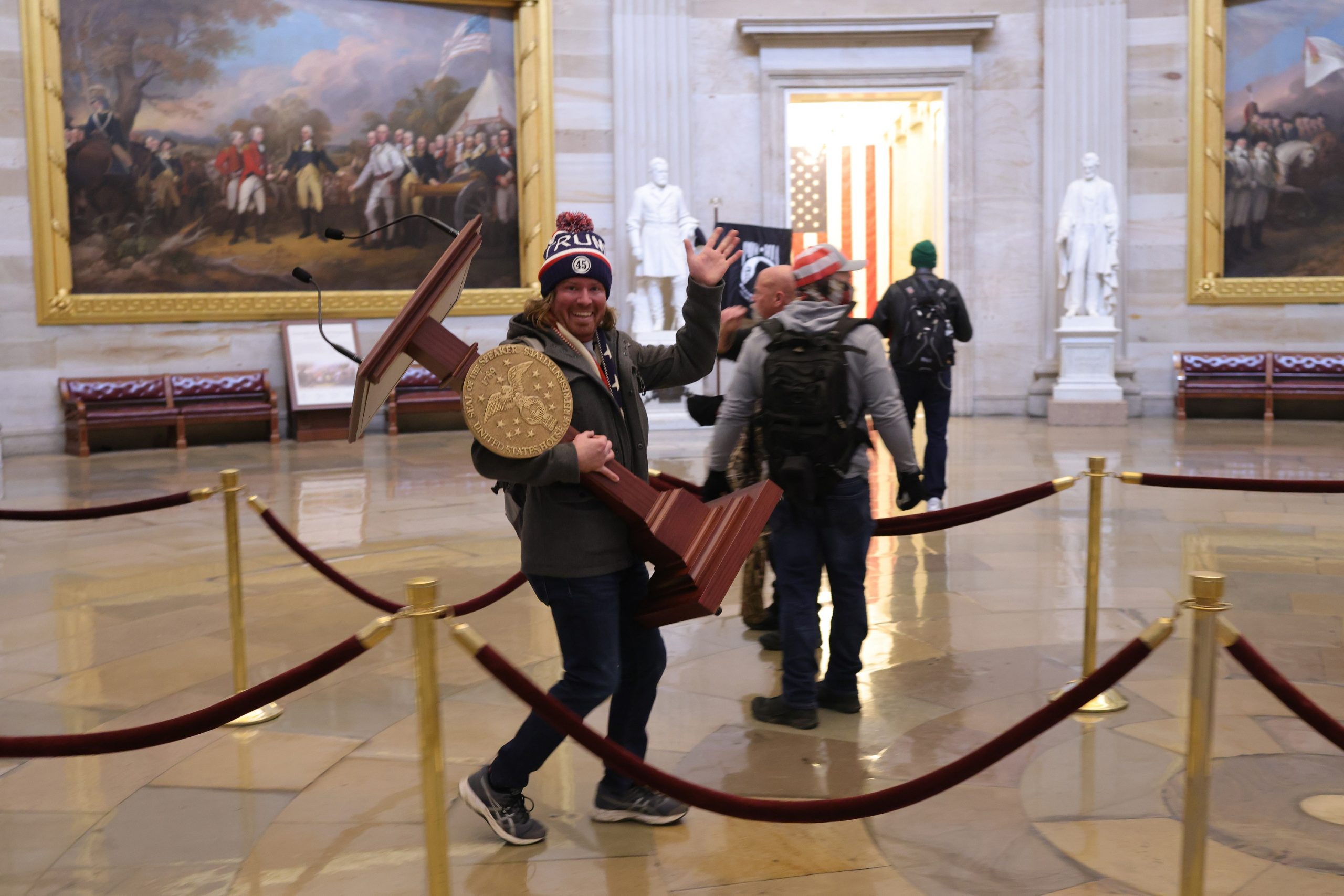 Fig. 1. “A pro-Trump protester carries the lectern of the US Speaker of the House Nancy Pelosi through the Rotunda of the US Capitol after a pro-Trump mob stormed the building on January 6, 2021, Washington, DC.” Photo by Win McNamee/Getty Images

In the Rotunda on January 6, Johnson and the others who were fired up for insurrection were surrounded by images of idealized masculinity. Behind Johnson’s raised left hand is the National League of Families Prison of War-Missing in Action flag, created by commercial artist Newton Heisley in 1972. The flag’s black silhouette, based on the profile of Heisley’s Marine Corps member son Jeffrey, is accompanied by the words “You are not forgotten” and the iconography of imprisonment—a guard tower and a barbed-wire fence. Within the Rotunda, military service, sacrifice, and leadership are also signified by Franklin Simmons’s marble statue of Ulysses S. Grant of 1899, and Vinnie Ream’s marble of Grant’s Civil War–era commander-in-chief Abraham Lincoln. Accompanying the sculptures, John Trumbull’s painting Surrender of General Burgoyne (1821; The Art Collection, United States Capitol) memorializes the defeat of British forces at the Battle of Saratoga in 1877: Trumbull chose to depict the victorious Horatio Gates not accepting the sword of his redcoat rival Burgoyne but instead, inviting him into the tent bearing the Continental Army flag at the rear. Trumbull’s painting suggests that after battle, combatants can come together and start anew for the sake of the greater good.

The sight of Johnson cradling the Speaker of the House lectern provokes thoughts of war and its casualties. The lectern was recovered in the Capitol building on the same day of its taking and was physically undamaged. Nonetheless, January 6 was a deadly day: five people lost their lives as a result of the invasion, and more than 140 people were injured. The psychic consequences are still to be addressed and assessed for those who were there as well as for those who watched it from afar. It is one dispiriting thing to see a fearless mob act out what privilege and entitlement look like. It is another thing—a terrifying, breathtaking thing—to imagine oneself among the hunted, sought for their value as spoils of war. Taken seriously, shouts of “Where’s Nancy?” registered as calls for Speaker of the House Nancy Pelosi’s head. It follows that the lectern was a surrogate for the woman who could not be found and that things could have turned out differently in the Capitol on January 6.

The story of the Sabine women’s abduction and rape during the eighth century BCE comes to mind. In the historian Livy’s telling, the ancient Romans sought to maintain their city-state’s strength and to increase their numbers; women of child-bearing age were the necessary instruments for doing so. The Romans’ capture of thirty women from nearby towns has inspired treatments by many artists, among them Italian Baroque painter Sebastiano Ricci (fig. 2). Ricci’s composition presents dramatic action and analogy. In the backdrop, trees sway in the breeze, signaling the disturbance of order. In the foreground, the tumult is pronounced, as women struggle against the grasp of men. The former are tall and fleshy, and are therefore good candidates to produce healthy children, and many of them. The latter’s muscles rip as they stolidly go about their tasks, indicating their virility and ability to control situations. While we never see any of these male faces in full, their captives’ frowns, extended arms, and splayed fingers convey anger, despair, and defiance. The painting’s middle ground also features degradation and resistance to it. On the left, a woman stiffarms her attacker, who has her almost to ground. Toward the center of the painting, there is a woman down on the steps, subdued by a man whose right leg is visible. Amid the setting of classical architecture, public space, and festival rites, the seizing of females and claims to ownership of them communicate that Rome, to some extent, was built on such a day. 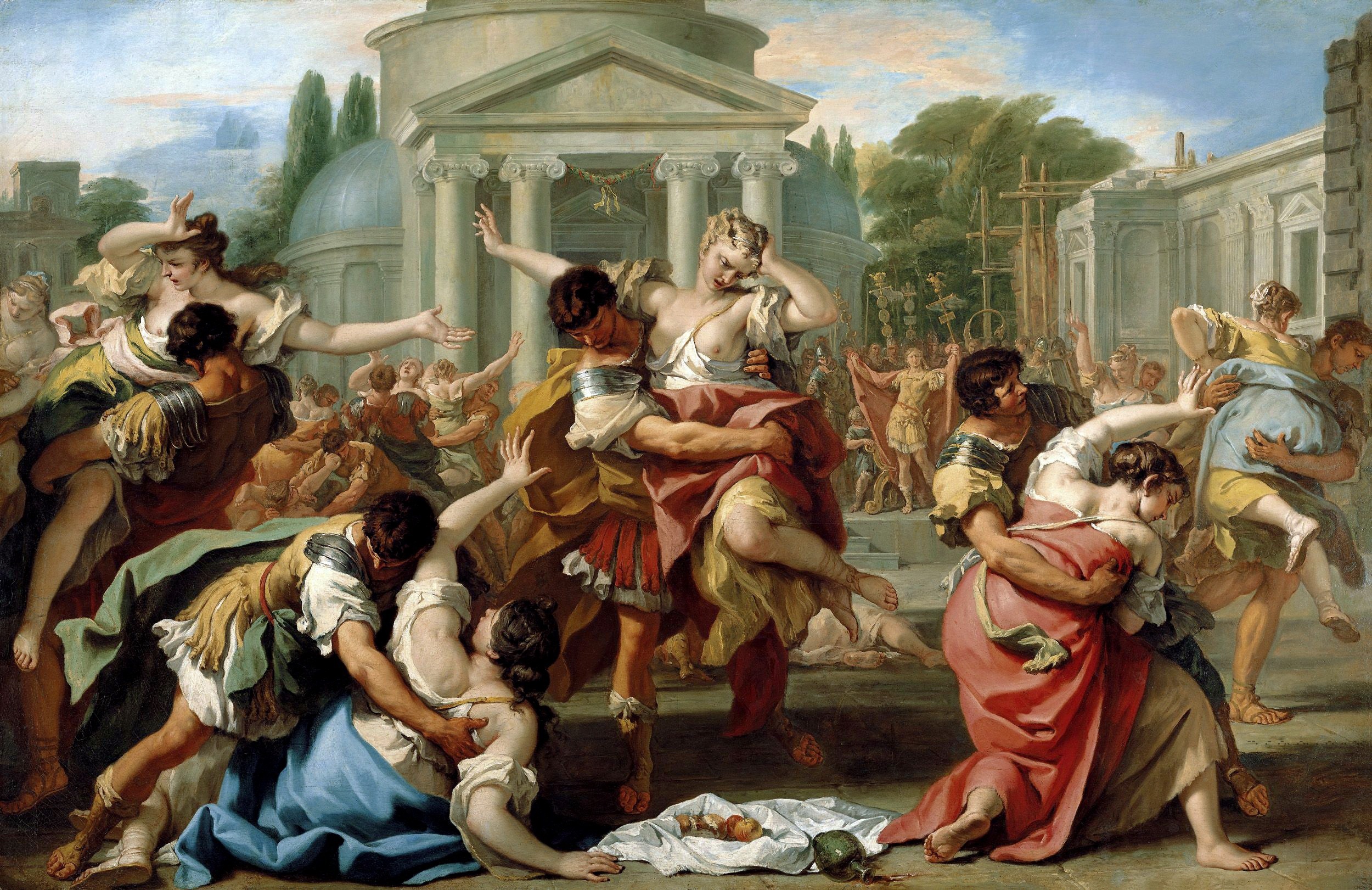 That the sights of violent ignobility in Ricci’s painting (and other treatments of the Sabine legend) and in the documentation of the Capitol attack have not generated sustained outrage and demands for accountability speak to the working operations of ideology. That is, we accept such phenomena as logical and legal. Johnson’s belief that he could remove the Speaker’s lectern may remind scholars of American art of William Sidney Mount’s Fair Exchange No Robbery (fig. 3). In the bright light of day, a ginger-haired white man moves to lift a scarecrow’s boater from its head; because the man touches his own battered hat as he is liberating the scarecrow’s, the inference is that there will be a switch. Although the term “fair exchange, no robbery” suggests an even-stephen swap, Mount’s purview may or may not have been such. Art historians Elizabeth Johns, Charles Colbert, and Martin A. Berger are among the scholars who have written about Mount’s genre paintings. Johns has interpreted them as subtle critiques of Mount’s nineteenth-century milieu.2 Colbert has advanced Johns’s view, stating that Fair Exchange No Robbery, in particular, “can be considered a simple anecdote about those who adopt expedient standards of conduct.”3 Yet, Berger finds ambiguity in Fair Exchange No Robbery. He rightly notes that Mount places the man, scarecrow, and dog outside the less-tended cornfield, suggesting that this down-on-his-luck, not-laboring man is not trespassing; instead, he is walking through open, public land that some viewers would link to “fair appropriation.”4 Similarly, Berger suggests that viewers would have read theft from a scarecrow as no theft at all. (As an aside, we can note that even the dog is unperturbed.) Berger concludes, no matter what the subject of Mount’s painting, that “European Americans viewed it through the lens of white privilege . . . the logic of whiteness rationalizes appropriating what belonged to those unprotected by the designation as ‘white.’”5 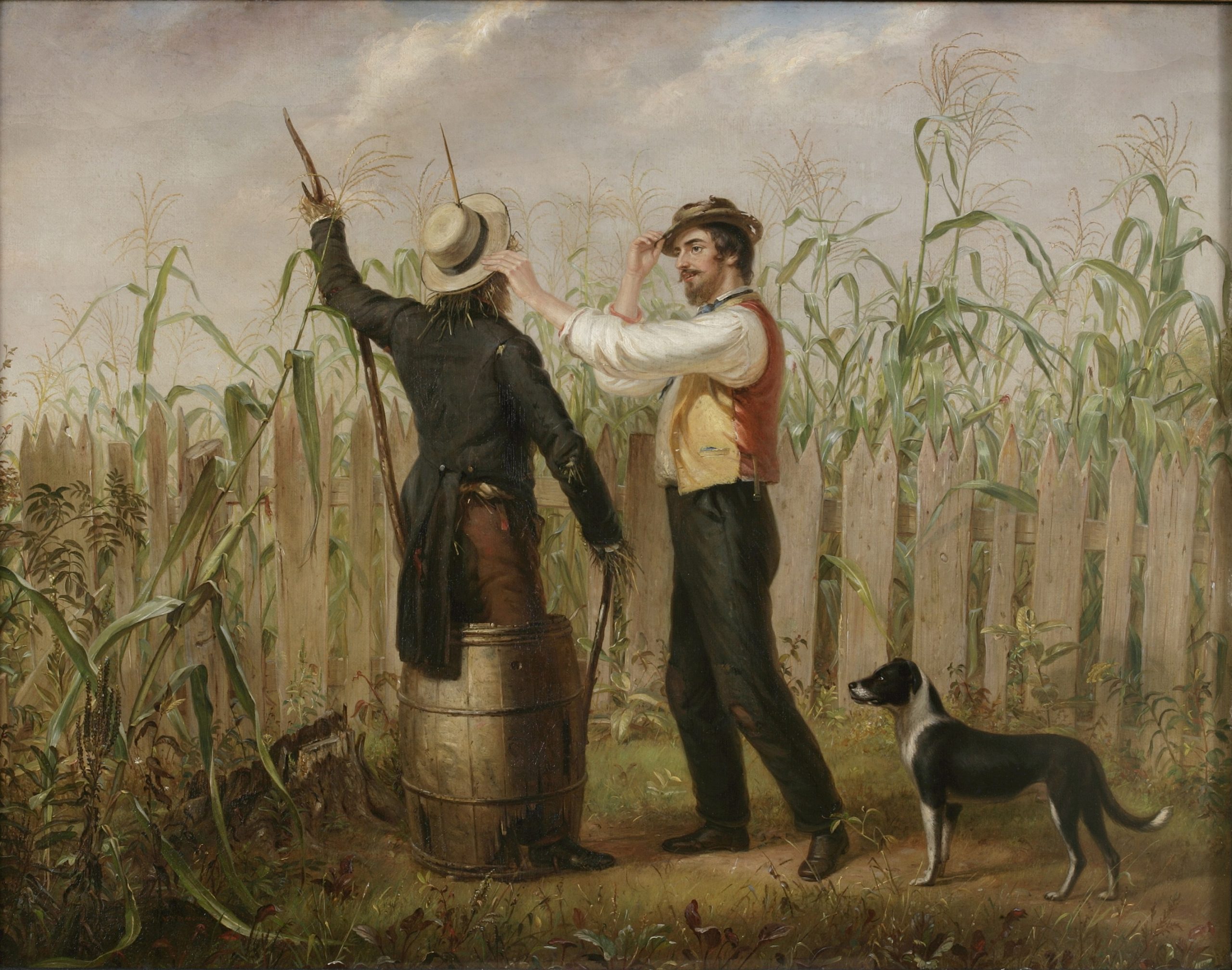 Whiteness is a racial category. Like all identity categories, it is always in need of shoring up. If Mount’s painting speaks to the advancement of whiteness in nineteenth-century America, McNamee’s photograph of Johnson is testament to its maintenance and contestation currently in the twenty-first. Recall that the white workers at the Capitol on January 6—elected officials and laborers that make the place run—were not fully protected by racial privilege. The former group was among the targets of marauders who ginned themselves up by proclaiming: “This is our house.” What they meant was that the federal building was theirs as whites to take and occupy, supplanting those who they considered values-compromised elites, most of whom identify as white people. Rioters judged it the right time and place to take a fight to the police and other security officers, stationed there to protect the assets of racialized capitalism and to uphold a classed, white supremacist order.

Hence, alongside the anti-Semitism, nativism, patriarchy, racism, sexism, and xenophobia at the Capitol was an intraracial conflict. If only internecine strife, sustained without bloodshed, could break apart whiteness marshaled in the service of domination. Faced with the unlikeliness of this outcome, we recognize the greater challenge: constructing and enacting equitable structures of redistributed power—namely, the making of sights that are still unseen.

PDF: Francis, Sights Made and Seen

About the Author(s): Jacqueline Francis is Associate Professor and Chair of the Graduate Program in Visual and Critical Studies, California College of the Arts. She is an Executive Editor at Panorama.