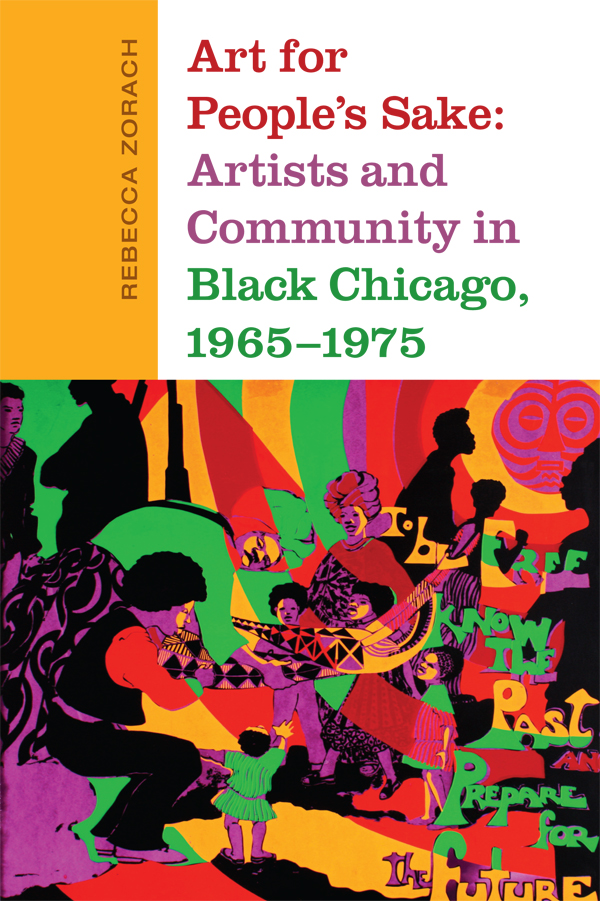 A thoughtful, long-awaited appraisal of Black Arts Movement–era artistic practices in Chicago, Rebecca Zorach’s Art for People’s Sake: Artists and Community in Black Chicago, 1965–1975, has arrived not a moment too soon. The field of African American art history is poised to offer new insights on the complexities of post-war Black artistic communities. While scholarship on 1960s to 1970s formalist abstraction by Black artists has increased in the last five years, the unfortunate flip side is that the Black Arts Movement (BAM) too often gets positioned as the ideological bad object, set against the abstract painters and sculptors whose style of work was late modernist and therefore coded as white.1 Within this rubric, paintings, sculptures, and public projects generated by artists affiliated with the BAM are too frequently characterized as wholly figurative and positioned as strawmen to the supposedly more critical operations of abstraction. Happily, Art for People’s Sake is a powerful rejoinder to the notion that the BAM only ever constituted static, unchanging ideas about Blackness, communal belonging, or “the people.” The book’s signal intervention is to question the terms of modernist criticality and negation—or “art that is aesthetically antagonistic, preferring irony, ambiguity, and the production of discomfort”—as the only, or most important, criteria for significant art of the late twentieth century (16). Instead, as Zorach effectively articulates, the BAM insisted on affirmation and care as practices of criticality.

Zorach makes the case that over a period of ten years, artists in Chicago’s flourishing BAM established innovative forms of cultural communication with Black people across many walks of life. The end goal was not simply making contact with Black viewers but transforming them to race consciousness. She suggests that this change was uniquely achieved via mural painting, new collective social formations (Organization of Black American Culture, African Commune of Bad Relevant Artists [AFRICOBRA], Association for the Advancement of Creative Musicians, Phil Cohran’s Art and Heritage Ensemble), and experiments in institutional collaboration, such as that between the gallery Art & Soul and the Museum of Contemporary Art Chicago. These tactics cut through the external, monolithic presumptions that so often attach to the overused phrase “Black community.” A central premise of the book is that Chicago’s culture workers privileged collaboration with and for a wide range of interracial community members whom Zorach calls “non-artists,” comprising bureaucrats, businessmen, educators, youth organizations, and schoolchildren, among many others. As artist José Williams noted of the South Shore–located Afam Studio and Gallery: “We do not see ourselves as bringing culture to this community. This community is seething with culture” (53). In other words, Afam and other cooperatively run, self-determined spaces did not seek to bring an already legitimized, institutionally validated art to Black working-class and low-income neighborhoods but instead aimed to frame and support the creative claims to space and visibility already happening there.

The book is organized thematically, with each chapter lending a granular, methodically reconstructed history of a different project or collective. Chapter one assesses the claims to space asserted by African American artists in Chicago under the conditions of so-called urban renewal, redevelopment, and segregation imposed by local and national housing ordinances. While histories of the “spatial politics of race” are well trodden in other disciplines, in art history they are much less discussed with relation to public art, site-specific and site-dependent projects, and art made in urban spaces more generally (30). Zorach opens with an overview of governmental and real estate policies that severely hampered desegregation efforts and isolated African American residents from broader access to employment, education, and transportation. The historical conditions that created this stranglehold on space are crucial to understanding the arts institutions that Chicagoans built on the South and West sides, and it is to Zorach’s credit that she spends ample time tracing them here. Against this backdrop, she illuminates important, underrecognized artist-run studios, storefront galleries, alternative spaces, and festivals, such as the 57th Street Art Fair, Ankh Studio, and The Arts on Stony Island Avenue, and ends with the Wall of Respect, painted in August 1967. She argues that the wall exemplifies the tactics of occupying, renaming, and reconfiguring space that artists and community members enacted to exert spatial ownership—a process that went beyond the official making of the wall and extended into the celebratory performances and protective stances surrounding the wall in the years following.

The theme of grassroots organizing and advocating for the community from within extends into chapter two, which examines the breadth of Black cultural nationalism in Chicago. Zorach carefully teases apart the varying strands of activity that constituted the conscious becoming of Black, in the 1960s, as a marked transition away from “Negro.” To that end, Zorach brings a fresh eye to young people’s street organizations, or gangs, refuting the perception of them as a social problem. Instead, she shows that these groups were a key component of local, state, and federal programs that sought solutions to urban uprisings by giving more authority to those residing in poorer neighborhoods. Youth programs such as Operation Bootstrap served a dual function, both as a way to de-escalate violence during hot, restless summers and also as vessels of creative expression and self-determination. This focus on the political potential of young people perceived by the white establishment as dangerous extends into chapter three, which lasers in on the neighborhood gallery Art & Soul, part of a Vice Lords street gang spinoff called the Conservative Vice Lords (CVL), and their work with the nascent Museum of Contemporary Art. Art & Soul sponsored classes, writers’ workshops, readings, residencies, and art contests intentionally made “an art of the labor required to create such a space” by reversing the paternalistic, charity-like model of federal funding efforts (172). While the CVL collaborated on other West Side-area projects, Art & Soul operated under the stewardship of the University of Illinois-Chicago, part of a larger phasing out of civic engagement involving gangs, and the increased framing of gangs as negative social forces under the Daley administration.

Chapters four and five start from the catalyst of positive images as practiced by AFRICOBRA and within the mural movement, respectively. Zorach skillfully shows the recourse to positive images as not simply countering stereotypes and discourses that pathologized Black families, but as a conscious and assertive use of “images to shape new human beings” (188). This is an important intervention in the binary that often separates the BAM from postmodern artists said to interrogate the role of images in visual representation. Here, Zorach repositions the positive in AFRICOBRA artwork as formally inventive, which in turn is inseparable from socially transformative. In returning to the Wall of Respect and the broader community mural movement, Zorach shows the complexities around positivity. Not only did public murals frequently display hard truths about the systemic conditions that led to disinvestment in neighborhoods on the West and South Sides, but not all residents wanted them there, associating them with blatant improvement efforts that contributed to labeling certain areas as blighted. Finally, chapter six explores Black film and theater becoming mainstream. Zorach anchors the chapter with Melvin Van Peebles’s Sweet Sweetback’s Baadasssss Song (1971)—whose opening credits announced: “Starring the Black Community”—and critiques of the film by artists affiliated with Chicago’s Kuumba Workshop, South Side Community Arts Center, and those affronted by the film’s challenge to heteronormative family values. Black filmmakers had begun to claim mass-media technologies as a form of self-representation, but the flipside of this was the absorption of the BAM’s radical visual strategies into corporate advertising, Hollywood, and photojournalistic spectacle.2 This chapter brings up the question of whom BAM discourses ultimately benefited in practice, although its focus on film is slightly disconnected from the discourse about grassroots painting and communities that link the prior chapters.

Throughout, Art for People’s Sake is exceedingly generous in its lucid reconstruction of figures significant to the Black arts scene in Chicago, without romanticizing the realities in which they lived. In this way, the book contributes more broadly to recent histories of Black arts and artistic production across the United States by Margo Natalie Crawford, Kellie Jones, Amy Abugo Ongiri, and Daniel Widener, which have done much to challenge perceptions of the BAM as essentialist.3 At the same time, the thread of the argument occasionally gets lost in the voluminous amount of historical context, as well as the large cast of characters who snake in and out of chapters. A clearer theoretical argument centered on the heart of the book—formally defining community versus people and street—would have streamlined the reader’s journey through the many artistic experiments pioneered in Chicago. Zorach also begins to gesture to ideas that have currency in our current political moment—namely, the notion of rebellion as regenerative rather than destructive:

What if the urban uprisings known as “riots” could themselves be understood as a gesture of creation rather than mere wanton destruction?

. . . . But the act of uprising, however dangerous, however destructive its consequences, and however doomed, should also be understood as a conscious attempt at visibly reshaping space and human relationships to it. . . . Violence in its several guises was one of the few forms of making available to these kids (294).

These ideas are crucial to the field of art history, which remains largely wedded to the conservation of objects above all else. The notion of violence as creation could have received further prodding here, not only on the level of politics, but for what it implies in redefining art and expanding our study of it.

Zorach’s exhaustive archival and photographic efforts both within the book and related to it implicitly demonstrate potential new paths in scholarship, but a reader—especially this reviewer, another white woman working on African American art—might be left with questions about the complex role of authorial subject position in Black studies and in African American art. Art for People’s Sake models commitment to more, and accurate, histories of people, objects, and events that have been historically marginalized, and it centers the makers of these histories in the telling. In this way, Zorach remains accountable to neighborhoods beyond immediate academic doorsteps, as do her other projects in the digital humanities and digital archives.4 Yet, especially as we push for the traditional demographics of art history to change, it is worth considering the ways in which we might make more explicit claims to method and the work needed to destabilize our “possessive investment in whiteness.”5 While this is a question much bigger than any art-historical study alone can ever hope to address, Zorach’s dogged commitment to the same directive of many practitioners in the book—“the place of history in shaping consciousness” (203)—provides one useful and optimistic direction forward.