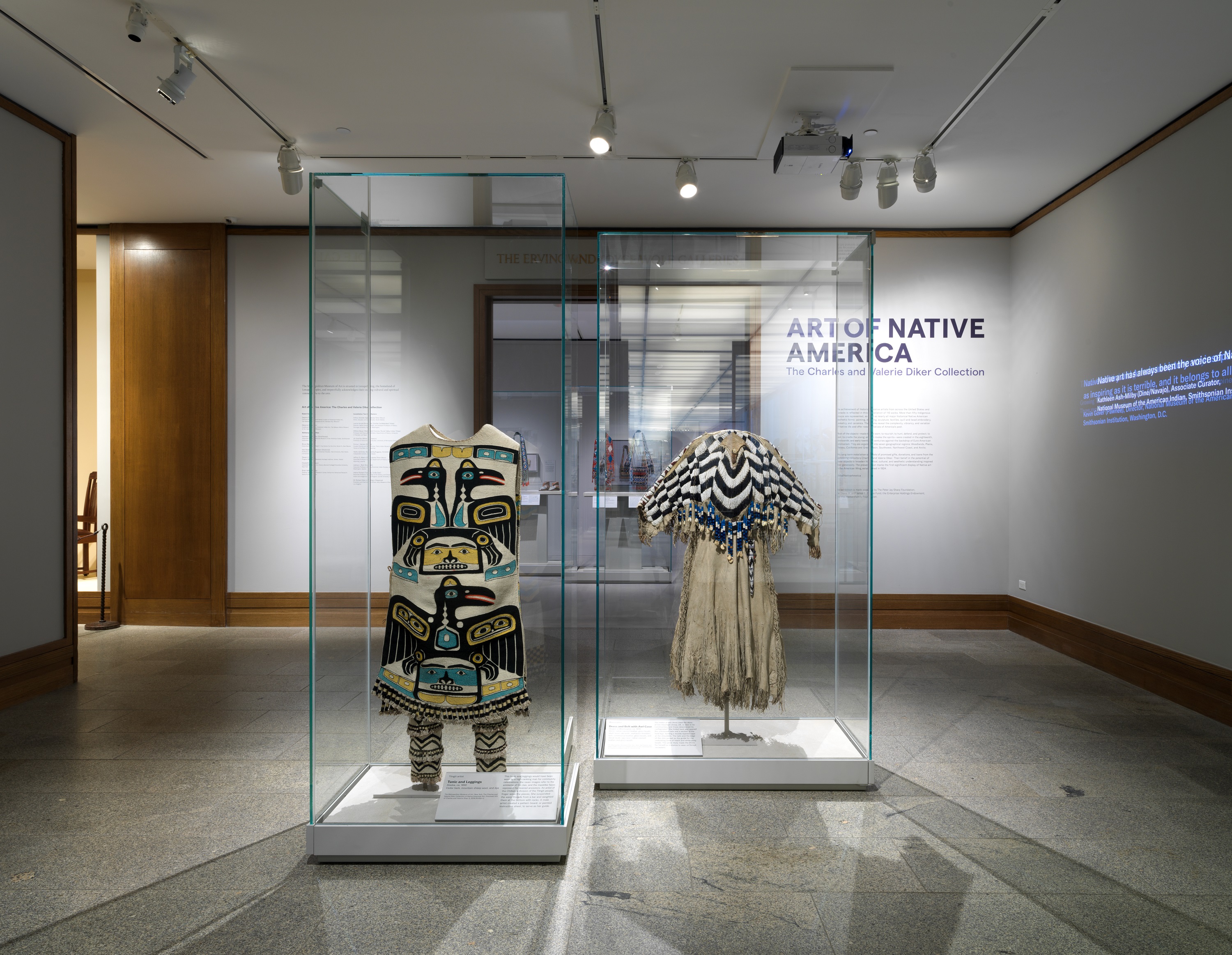 In the spring of 2017, The Metropolitan Museum of Art announced the promised gift of ninety-one works of Native American art and material culture from the collection of Charles and Valerie Diker. The Dikers, who had previously gifted twenty works to the museum, spent four decades assembling an impressive collection of Native American masterworks spanning the geography of the United States and Canada from the second to the early twentieth century. While this collection, and its promise to The Metropolitan Museum of Art and the resulting exhibition Art of Native America: The Charles and Valerie Diker Collection, represent the inherent and ongoing colonialism of museums, it also and most importantly represents the historical and ongoing diversity, vibrancy, and ingenuity of Indigenous American people and practices.

Art of Native America features 116 works from more than fifty different Indigenous nations and communities, and the exhibition is divided into seven sections, based on ethnographically determined geographic regions or culture areas: Woodlands, Plains, Plateau, California and Great Basin, Southwest, Northwest Coast, and Arctic. The exhibition was guest curated by Gaylord Torrence, Fred and Virginia Merrill Senior Curator of American Indian Art at the Nelson-Atkins Museum of Art in Kansas City, Missouri, and Nelson-Atkins American Indian art curatorial consultant Marjorie Alexander. Art of Native America is the first exhibition of American Indian and Indigenous art to be on view in the American Wing of The Metropolitan Museum of Art. Previously, works of Indigenous American artists have been accessioned and exhibited in the galleries devoted to the arts of Africa, Oceania, and the Americas. As the museum and other institutions grapple with increased public calls to acknowledge the marginalization and outright exclusion of certain communities and cultures within museum spaces, Art of Native America provides a critical opening for thinking more specifically about how to shift our representation and understanding of the American art canon.

As visitors approach the Erving and Joyce Wolf Gallery, they are welcomed by a late nineteenth-century Tlingit tunic and set of leggings woven from wool and cedar bark as well as a leather Wasco dress adorned with glass beads, shell, bone, elk teeth, and brass thimbles from the same era. These objects are located in two separate cases placed before the introductory panel and a series of projected quotes from Indigenous artists and scholars, which broadly describe the important role of artistic expression within Native American nations (fig. 1). By placing the Tlingit tunic and Wasco dress before the introductory text, the curators signal the primacy of the individual works of art within the exhibition, a successful strategy that allows the individual artists and communities—even those who are unidentified—to speak more directly to the audience, through the objects themselves. 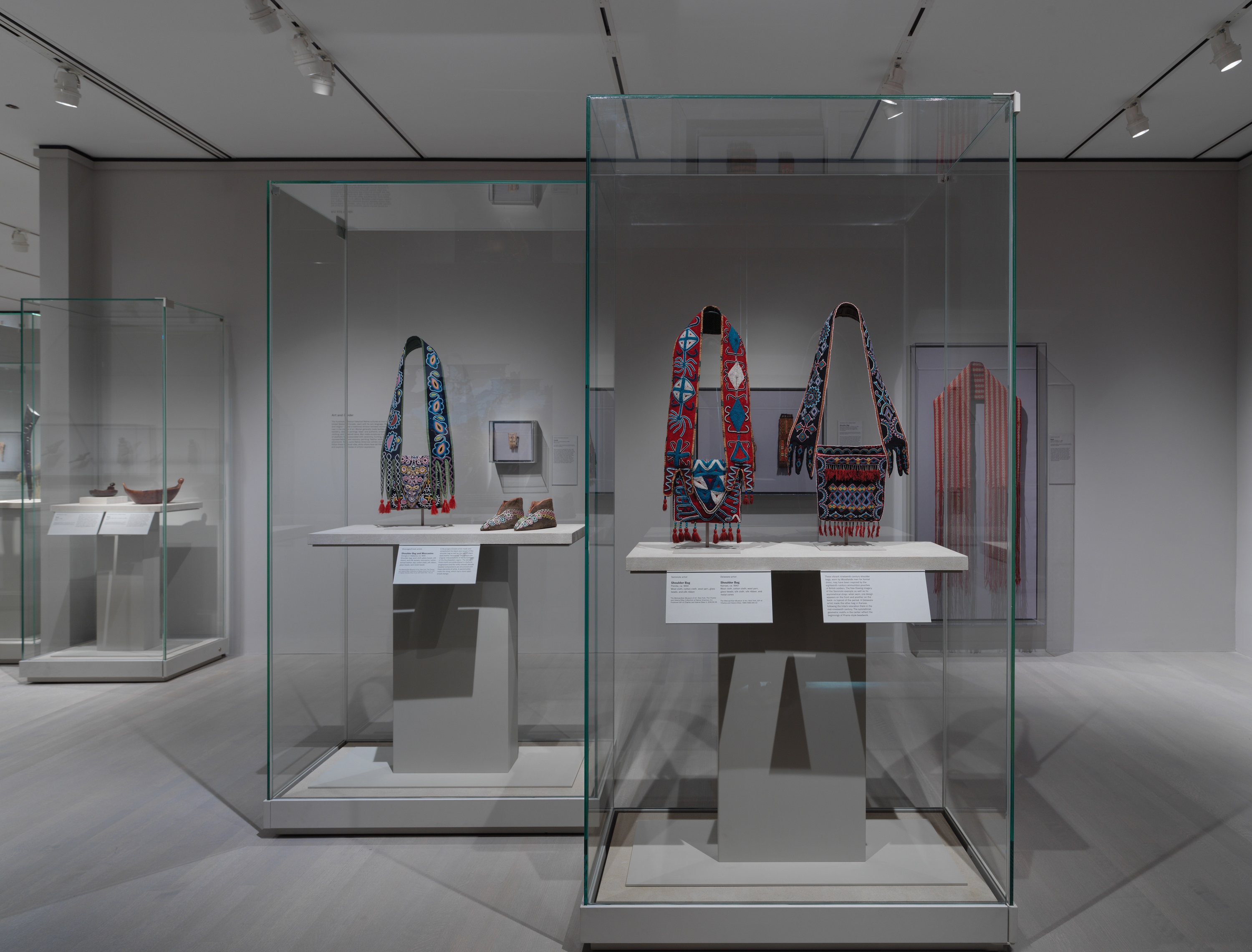 In the exhibition, a carefully worded statement sited adjacent to the projected quotations and introductory wall text gently reminds visitors of the Lenape polities who inhabited Manhattan and were forced to migrate due to Dutch and other European colonial settlements. The text recognizes the advisory committee and text contributors and includes a statement acknowledging the historical connotation of the very land on which the museum was established, stating: “The Metropolitan Museum of Art is situated in Lenapehoking, the homeland of Lenape peoples, and respectfully acknowledges their ongoing cultural and spiritual connections to the area.” These panels and projected texts frame the entryway to the main gallery, and unlike the historical works in the exhibition, speak to the continued existence of Indigenous nations in America. Upon entering this space, visitors are greeted by a selection of Woodlands art that beautifully illustrates the complex entanglements that characterize Indigenous interactions with Euro-American colonialism during the eighteenth, nineteenth, and early twentieth centuries. These objects demonstrate the ways Indigenous people engaged with Euro-American economies and materials on their own terms and in ways that were meaningful within their own communities. Lenape shoulder bags are stunning examples of this, because they were often made entirely with objects acquired through global trade: wool cloth, cotton cloth, wool yarn, glass beads, silk ribbon, and metal cones (fig. 2). Although this particular bag was made with objects coming from outside of the community, the artist (or artists) created something that was uniquely Lenape.

The label for this object reads “Delaware Artist,” which is a strategy employed throughout the exhibition for all works where the maker is unknown. The prominence of the objects as works of art can be appreciated in the same way other works in the American Wing are admired, and this is communicated through these labels as well as the casework and spacing of the installation (fig. 3). The objects are not overcrowded within cases or the galleries, which allows for more thoughtful contemplation and deeper interaction from audiences, many of whom may be engaging with Indigenous American art for the first time. While this strategy—and the inclusion of the exhibition in the American Wing—places these artworks in conversation with other works of American art, it also reinforces the position of Euro-American institutions as the arbiters of value and beauty. Before these objects left Indigenous communities, they also served valuable social, cultural, religious, ecological, and epistemological roles. The description of the Diker Collection as art alone is an important development within the canon of American art and opens up greater inclusivity within the field, yet it also limits the potential for these works to hold other forms of value and possibilities for engagement with descendant communities. 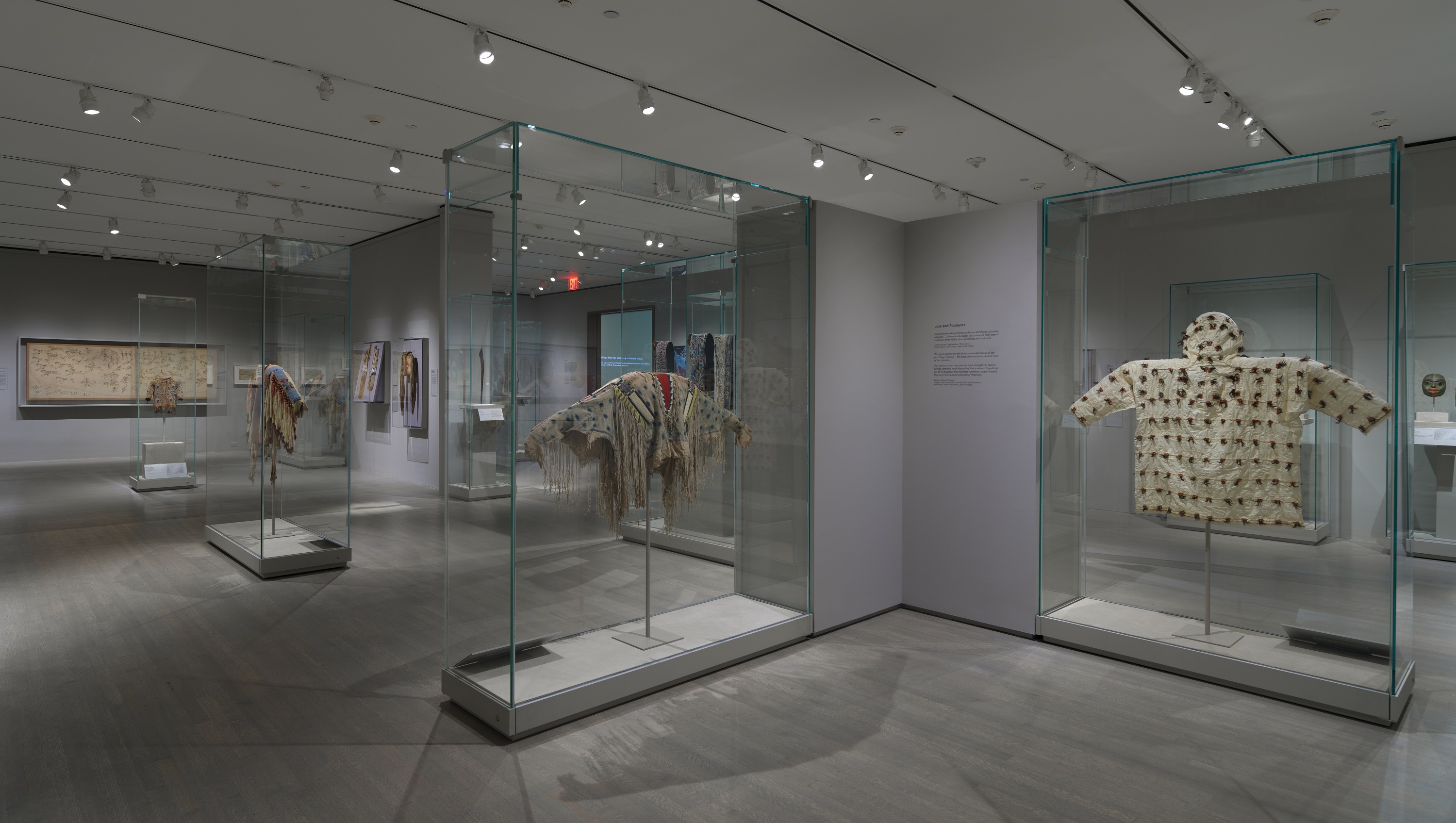 The limitations of placing Indigenous art and material culture into Western epistemologies also relates to the economic aspects of value attached to donor exhibitions in particular. Many of the works included in Art of Native America have been shown in previous exhibitions, including Native Paths: American Indian Art from the Collection of Charles and Valerie Diker at The Met in 1999; First American Art: The Charles and Valerie Diker Collection of American Indian Art at the National Museum of the American Indian, New York, in 2004; Indigenous Beauty: Masterworks of American Indian Art from the Diker Collection, a show supported by the American Federation of Arts, which traveled to the Seattle Art Museum, the Amon Carter Museum of Art, the Michael C. Carlos Museum, and the Toledo Museum of Art in 2015; and most recently Native American Masterpieces from the Charles and Valerie Diker Collection at The Metropolitan Museum of Art in 2016. As this list demonstrates, the Diker Collection has been on view numerous times over the past two decades, with each exhibition and catalogue raising the profile and economic value of the collection.1 Museum exhibitions featuring promised or outright gifts often highlight the patronage and pioneering vision of the collectors, while neglecting to focus on the creativity and capacity of the artists and makers whose work is featured within a given exhibition. Art of Native America is no exception. This phenomenon is not unique to this show or The Metropolitan Museum of Art alone; it is an issue with which many museums across the globe regularly contend.

The works on view within this exhibition capture audiences in ways that demonstrate the multiplicity and capacity of Indigenous communities. Throughout my time in the galleries, I heard several visitors make comments about the ability of these people to not only survive, but to flourish and to create beauty in conditions that are so far removed from their own experiences. One example of an object that facilitated such a conversation was the Thule (ancestral Inuit) snow goggles carved from walrus ivory (fig. 4). As I stood in the gallery, I watched as an adult explained what they were to a child, who responded: “Wow, they don’t look that different from my ski goggles. Did Native Americans invent ski goggles?” In this moment and others, through the direct interaction of audiences with the materiality of art, there is opportunity to build greater understanding and respect for diversity as well as an appreciation for the possibilities that emerge from interactions with multiple communities. The inclusion of this exhibition in the American Wing certainly promotes greater audience engagement with those who may not otherwise have engaged with this material. 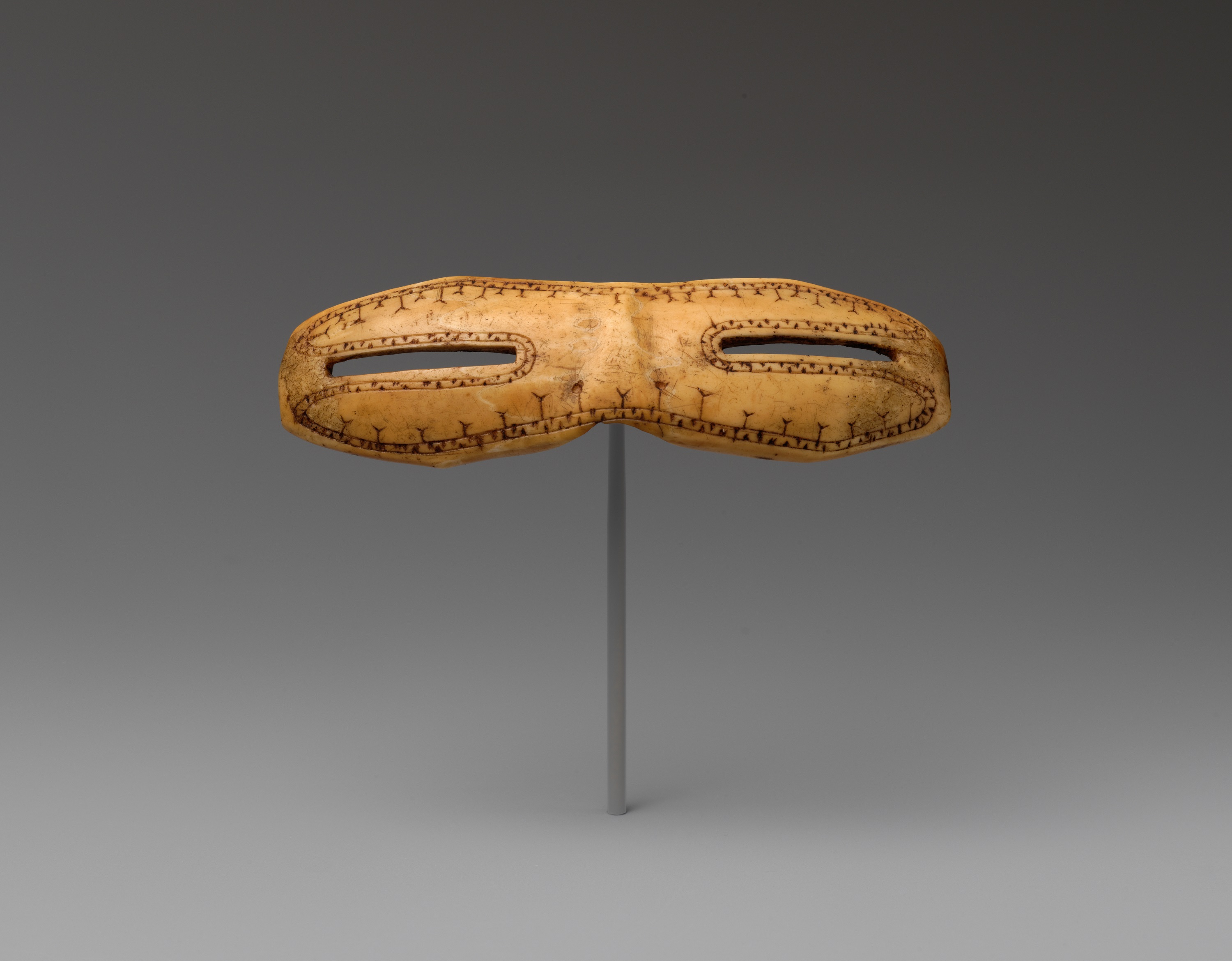 Art of Native America was successful in representing the diverse contributions Indigenous artists have made within American art and aesthetic production through the inclusion of textiles, quillwork, beadwork, paintings, drawings, sculpture, embroidery, basketry, and ceramics. Because this exhibition stands on its own, the works are not integrated into the American Wing installation in a manner that places the art alongside contemporaneous works or other artwork addressing similar thematic content. Although I realize that the assimilation of these works into the existing permanent collection galleries would have been a massive undertaking, I am hopeful that after the initial exhibition celebrating the promised gift has been on view for a certain amount of time, The Metropolitan Museum will work toward displaying this collection in a more comprehensive manner that reflects in meaningful ways the historical and ongoing entanglements between Indigenous people and all Americans. By means of programming for the exhibition—including roundtable discussions,2 presentations by contemporary Indigenous artists, a related installation, and label changes—the museum has declared this exhibition as the beginning of a much larger project, one that I will be following for years to come.

An earlier exhibition of this collection, Indigenous Beauty: Masterworks of American Indian Art from the Diker Collection at the Toledo Museum of Art, was reviewed in Issue 2.2 of Panorama. Please click here to read the review by Laura E. Smith.

About the Author(s): Jami Powell is Associate Curator of Native American Art at the Hood Museum of Art, Dartmouth College