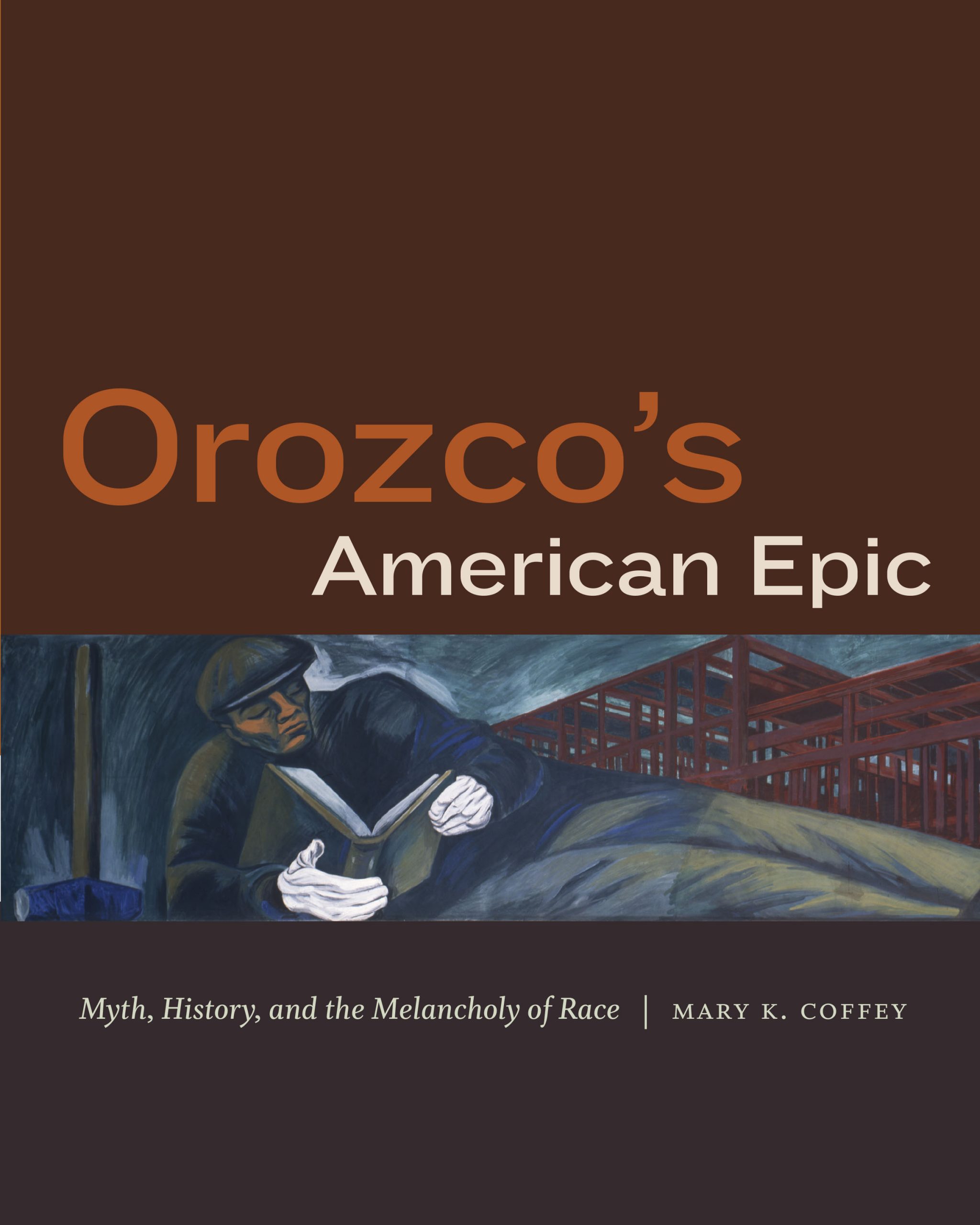 From 1932 to 1934, José Clemente Orozco (Mexico, 1883–1949) completed his largest and most ambitious mural in the United States at the Baker-Berry Library of Dartmouth College in New Hampshire. This small-town New England destination was an unlikely place for this Mexican artist, whose previous and only commissions in the United States were at Pomona College in California and the New School for Social Research in New York City. Of greater interest, however, is the subject matter of this mural, The Epic of American Civilization (fig. 1), which author Mary K. Coffey has meticulously, critically, and eloquently dissected in her book Orozco’s American Epic: Myth, History, and the Melancholy of Race. Consisting of twenty-four panels painted in buon fresco and covering approximately thirty-two hundred square feet, the mural presents a fragmented narrative of America, beginning with the Aztecs and the myth of Quetzalcoatl, continuing with Spanish colonialism and Hernan Cortez, culminating in a comparison between scenes depicting Anglo-America and Hispano-America, and concluding with modern industrialization and the depiction of Modern Industrial Man. There is nothing linear about this extensive mural; Coffey beautifully points this out through her explanation of the term “epic” as opposed to “origin tales” and by explaining the nonsequential aspect of the mural as a type of “montage aesthetic,” which “manifests an idea, not a story, by making present the lost and buried objects encrypted within the hoary epics and smooth flow of historicist national narration in both Mexico and the United States” (22). More complicated, however, is the use of “America” and its etymology and historiography, which ironically do not factor into the introduction, although Coffey does, in chapter three, discuss Pan-Americanism and the distinction between the two Americas depicted in the mural. Coffey’s book is a meaningful contribution to a growing body of literature on the theme of Mexican muralism on both sides of the border.1

In the introduction, Coffey lays out the organizational structure of the book and, more importantly, its strong theoretical framework. She also lays bare her close relationship with the mural, as Coffey is a professor of art history at Dartmouth. Indeed, one of the strengths of the book is precisely her close reading of the mural, informed by archival research and rich formal analysis, so much so that readers feel as if they are experiencing the mural in situ, standing before larger-than-life-size figures such as Quetzalcoatl (fig. 2). Coffey’s overarching argument is grounded in Walter Benjamin’s Trauerspiel (mourning play) from the German Baroque theater as a way to explain how the mural defies historicist time and the usual narrative of progress. In so doing, Orozco presents a counternarrative that rejects eschatological logic and messianic politics, thereby explaining the disjointed nature of the mural. Additionally, Coffey turns to critical race and postcolonial theory to better understand race relations and the theme of mestizaje within postcolonial national discourse of the United States and Mexico.

In chapter one, Coffey introduces Diego Rivera (Mexico, 1886–1957) as a foil to Orozco, a logical and strong pairing of contemporaries, and this thread runs throughout the book, helping to reinforce her argument of Orozco’s mural as a “dialectical image,” in contrast to Rivera’s “discursive” (narrative) approach, as seen in History of Mexico (fig. 3). Coffey also incorporates the younger muralist David Alfaro Siqueiros’s mural Portrait of the Bourgeoisie (1939–40; Mexican Electricians Syndicate, Mexico City) as an example of a “dialectical-subversive” approach, noting how his use of a montage aesthetic was informed by cinematography (rather than Baroque allegory). Coffey strategically explains how Siqueiros (Mexico, 1896–1974) and Rivera both manipulate their audiences, the former by emotionally gripping them through cinematography and the latter by immobilizing them through demagoguery, whereas Orozco activates them by valuing “the viewer’s own critical, creative, or conscious capacities” (59). While these comparisons to Rivera and Siqueiros are rich and purposeful, they also reinforce the dominant and somewhat exhausted narrative of “los tres grandes.”

Coffey further expands on Benjamin’s Trauerspiel by demonstrating the ways in which historicism is not built on progressive narrative, but is instead constructed by the historical materialist. This main distinction between historicism and material history informs Coffey’s argument throughout the book, although in this chapter, she uses it to explain the formal poetry of the work, meaning the ways in which Orozco conceived of his mural as a machine and the ways in which the parts can be rearranged to create meaning, thus empowering the viewer.

In chapter two, Coffey begins her in-depth analysis of the ancient half of the Dartmouth mural. In this chapter, Coffey expands on the Aztec myth of Quetzalcoatl, which for Orozco is allegorical rather than transcendental, and that in turn “establishes a melancholy relationship with history” (119). Focusing on “The Departure of Quetzalcoatl,” Coffey challenges the Indigeneity of Orozco’s Quetzalcoatl, arguing that the figure is esoteric in the way it rejects Indigenism and instead relies on Judeo-Christian and Masonic references. This choice stands in contrast to Rivera’s ethnographic Quetzalcoatl, who frames Rivera’s Mesoamerican past while Marx frames the Marxist industrial future, with the theme of class conflict at its center. Rivera’s historicist approach idealizes Aztec history and legitimizes Marxism, whereas Orozco exposes Aztec aggression—in scenes such as “Ancient Human Sacrifice”— that dehumanize modern industry and condemn the Indigenists. Coffey brilliantly argues that this is an example of weak Messianism, since “his references to barbarism and genocide acknowledge that the reserve of the past disrupts rather than reifies the present” (120). Therefore, in Orozco’s interpretation of Aztec mythology, the tale of Quetzalcoatl is not an eschatological narrative of redemption, nor does it include a messiah, like Rivera’s Marx, but it instead places the viewer, both of Mexico and of the United States, as its protagonist. In so doing, Orozco invites us to look critically at the myth of Quetzalcoatl within the discourse of postcolonial nation-states.

In chapter three, the first of two chapters to explore the modern half of the mural, Coffey notes a transformation in the mural from myth to history, through the depiction of Cortez in the scene “Cortez and the Cross” (positioned opposite “The Departure of Quetzalcoatl”), continuing with an exploration of US and Mexican history through a rich comparison of the panels picturing Anglo-America and Hispano-America. In charting the legacy of Cortez from hero to scoundrel, Coffey explains how Orozco’s interpretation of Cortez’s career changed with time and according to commission, notably as seen in his murals at the National Preparatory School in Mexico City (Hernan Cortés y “La Malinche”; 1926) and Hospicio Cabañas, Guadalajara (Portrait of Cortez; 1938–39). Coffey rightfully warns, in accordance with Robert Esposito, that this shift is not to be considered an evolution toward melancholy history but that “for Orozco, philosophy is the subject or content of history” (140), instead of the other way around (as noted in the example of Rivera’s Cortez).

In the second part of chapter three, Coffey expands on the distinctions between the two Americas, and here Coffey breaks down the term “Hispanic” to explain its exclusion of non-white, non-Anglo-Saxons from definitions of America and contextualizes it within the larger debates of US American exceptionalism and the Black legend. Coffey nicely compares Orozco’s panels depicting Anglo-America to Hispano-America, with the former depicting an orderly arrangement of “white zombie” figures set against a rural backdrop and the latter a chaotic spiraling composition with more autonomous and diverse figures, like the racialized guerilla at the hands of the US general, set against a modern industrial background. Here, Coffey turns her attention to Rivera’s Detroit Industry murals (1932–33; Detroit Institute of Arts) and Pan-American cooperation to further her analysis of Orozco’s The Epic of American Civilization, providing a strong and much-needed sociohistorical context.

In the third part of chapter three, Coffey returns to Cortez as the secular counterpart to Christ in “Modern Migration of the Spirit.” This time focusing on theological narratives, Coffey reiterates her main argument, particularly how Christ becomes the embodiment of “the historical materialist-as-radical-monteur, destroying the phantasmagoria of technological modernity, eschatological time, and sovereign representation” (204).

In chapter four, Coffey focuses on the supplemental panel “Modern Industrial Man,” which has perplexed both the author and visitors, for the subject is represented neither as heroic nor identifiable but racially mixed, which Coffey argues is a reminder of the exclusion of raced populations in postcolonial discourse. The man is also not a campesino (farm worker) but an urban worker, as denoted by his blue overalls and hammer; yet he is not shown in the act of building but is instead reading. His face, Coffey argues, embodies references to US blackface minstrelsy and Mesoamerican Indigenous culture, both of which “have long genealogies within the colonial politics of emergent nation-states” (234). In demonstrating this shared legacy, Coffey convincingly demonstrates the extent to which racialization is at the core of American identity. Finally, and as a result of its contradictory iconography, Coffey proposes that we read the Modern Industrial Man as a conflictual character, instead of as a determinate one.

In her concluding chapter, Coffey focuses on the critical reception of the mural through two examples. First, she discusses the Hovey mural (1938) by Walter B. Humphrey, a Dartmouth alumni and muralist, which explores the themes of colonialization and Indigeneity through a stereotypical rather than critical lens. Coffey highlights Humphrey’s depiction of Indianness within the context of US national identity and, in particular, within Dartmouth College. Here, we learn about the inspiration for the mural, Dartmouth alumnus Richard Hovey’s drinking song, and about the mural’s polemical relationship with the college founder, Eleazar Wheelock, and Wheelock’s betrayal of Dartmouth’s original mission as a “school for Native youth” (273). Established in 1769, Dartmouth College was founded on Wheelock’s missionary work to educate Native American men, like his early pupil Samson Occom, a Mohegan Indian. Second, Coffey examines La Pocha Nostra, an artist collective whose 2002 performance, Orozco MEXotica: Guillermo Gómez-Peña Underground at Dartmouth, deconstructed these cultural stereotypes, engaging as much with Orozco’s epic mural as with Humphrey’s primitivist view of America. In juxtaposing these opposing responses and temporalities, Coffey leaves the reader with more questions than answers, effectively demonstrating the powerful legacy of Orozco’s The Epic of American Civilization and prompting future scholars to continue to critically engage with the mural. One is left wondering how Orozco’s mural resonates with today’s Latinx viewers. How is Orozco’s belief in a shared colonial and racial history brought into question by the experiences of immigration, displacement, diasporas, and xenophobia? Coffey’s sophisticated analysis and vivid description of Orozco’s mural combine a variety of methodologies that make this book timely, complex, and engaging.

About the Author(s): Maya Jiménez is an independent scholar