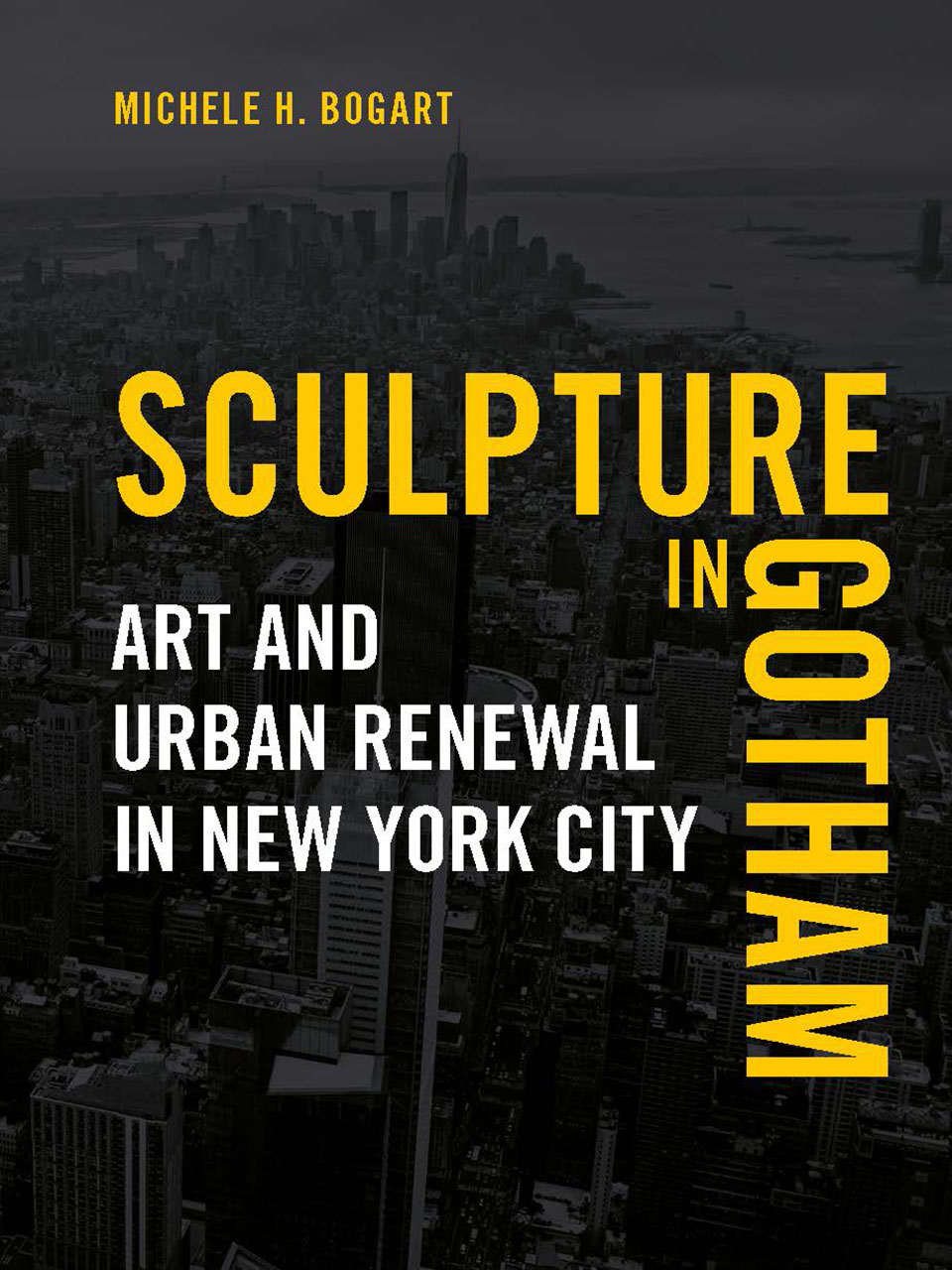 In the early days of this new decade, New York magazine art critic Jerry Saltz tweeted a succinct if perhaps polemical statement: “99% of All Public Art is Crap.” The provocation, whether meant sincerely or simply a consciously incendiary performance enacted for the benefit of social media discourse, speaks to the maligned status of public art in contemporary society—even as it attracts increased attention from scholars, the general public, private and public enterprise, and even critics. Saltz’s quip, however, also reflects an all-too-easy and common dismissal of public art that often stems from a gross misunderstanding, if not complete ignorance, about what defines this most particular of artforms; how it functions or can function in an ever-changing, increasingly global world; and the sheer byzantine mechanics usually required for its realization. In short, everything that Michele Bogart deftly addresses in her much-needed book, Sculpture in Gotham: Art and Urban Renewal in New York City.

In recent years, public and scholarly attention has focused on the role and fraught nature of monuments; however, serious discourse remains scant around those seemingly more benign forms of artistic expressions that continue to occupy space and place within the contemporary built environment. The publication of any book dedicated to illuminating the complex historical context and mechanics of how public art comes into being is itself notable. Bogart, however, does more than simply lessen an academic lacuna with this focused and well-research manuscript that further establishes her standing as an expert on public art in New York City.1

Over six chronologically organized chapters on specific individuals, agencies, and projects, Bogart convincingly demonstrates how the policies and approaches that have come to define public art in New York City today remain deeply connected to those enacted, often radically, over the preceding five decades. In doing so, she also makes a compelling case about how art, especially that made for and experienced in the built environment, can still function as a powerful vehicle for civic activism, collaboration, and engagement. Sculpture in Gotham, as its title suggests, has a consciously narrow focus: “the politics of public art patronage in New York City (8),” “during the ‘post-hero’ statue era, beginning around 1965” (9). So while the focus of Sculpture in Gotham is geographically limited, New York was and remains one of the most globally significant cities for the production and consumption of contemporary art. New York now has a proven track record as a leader in municipal patronage of public art, with the implementation of countless landmark projects; initiatives such as the city’s Percent for Art law, which was passed in 1982; and pioneering organizations such as the Public Art Fund, the Public Art Council, and Creative Time, which continue to function as innovative bastions in the field and models of patronage for the country and globe. Bogart emphatically writes that “New York’s public sculpture is of inherent historical significance,” but also it is clear what such a statement means within her project:

The analysis centers on the meanings and importance of this urban artwork, but the genesis and aesthetic nuances of specific projects play a secondary role. What is prioritized instead are the people, policies, and processes that facilitated the sponsorship, installation, and display of the new art in public places throughout New York City, especially municipally owned properties (15).

Drawing from archival materials, interviews, and her own experiences as a steadfast advocate for public art in New York, Bogart comprehensively analyzes these figures and projects, offering a specificity that frequently highlights the impact of many individuals whose names have been forgotten, erased, or perhaps are not as recognizable to those living outside of New York.2 Civil servants are often overlooked in histories of art, public or otherwise, and one of the major revelations of Sculpture in Gotham is just how many of the people that proved so crucial to the history of public art in New York during the last sixty years are women. Bogart describes this as a reflection of the “feminization of municipal cultural bureaucracies” that occurred during this period (18). Pivotal arts administrators such as Doris Freedman, Suzanne Randolph, and Anita Contini are just some of the individuals Bogart highlights throughout the book. She demonstrates how they worked collaboratively in order to forge new models for the public display of art, launching new initiatives, establishing departments and entire organizations, and serving as essential interlocutors between artists, communities, businesses, and government officials. Sculpture in Gotham thus also serves as an important testament to and highlighting of their tireless efforts and lasting legacies.

“Chapter Two: Toward Transience,” one of the strongest of the entire book, for example, examines Freedman’s advancement in the administration of Mayor John Vliet Lindsay (1966–1973) and the role she played in the realization of Sculpture in the Environment (1967) which was the first large-scale temporary exhibition of contemporary public sculpture “to be mounted under city auspices in several boroughs” (46). Bogart writes of just two small examples of Freedman engaged in pioneering work for the city of New York in the 1970s, placing sculpture at new commercial real estate developments and concurrently at multiples sites across parks citywide, and also that Freedman’s “strategies were new to New York City,” but they “would eventually become commonplace (61).”

Another standout is “Chapter Five: The Authority of Authorities,” which examines the Percent for Art programs enacted by the Metropolitan Transit Authority (MTA) beginning in 1981,3 and the slightly earlier art programs of the Port Authority of New York and New Jersey. Again, Bogart emphasizes the key roles played by women, including Nancy Rosen, Jennifer McGregor, and Wendy Feuer, while also highlighting the extensive impact, as well as bureaucratic difficulties, of placing art in public spaces traversed by millions each year. Bogart concludes the chapter with an astonishing fact that reminds the reader of the tremendous stakes of such projects and programs:

By 1990, New York City had no fewer than six major public art programs, none of which had existed before 1974. . . . The new institutional structures of public art revealed both the pragmatic and aesthetic consequences of the post-Moses bureaucratization of culture that, conjoined with the rise of feminism, enabled women to ascend into new roles as art advocates, middlemen, and occasionally, executives; there, they operated very effectively (155).

Bogart’s evocation of Robert Moses, the powerful New York commissioner of parks during the immediate postwar period, circles back to the first chapter of Sculpture in Gotham, in which she persuasively demonstrates how much of the current approaches to and expectations of public art in New York originated in the “The Moses Era.” Bogart remarks, almost in passing, that “In general . . . there is greater familiarity with civic art before the Second World War than with the work between 1950 and 1980” (12). This statement begs the question why, and should serve as a reminder that considerable scholarly attention to this topic and time period is still needed. While Bogart’s first chapter, beginning in the mid-1950s, seems like an attempt to connect these tumultuous three decades, it also has the unfortunate effect of flattening them. The limited examples of public art from about 1945 to 1965 she discusses in chapter one—José de Creeft’s Alice in Wonderland (1950) in Central Park, for example—serve as solid foils to the type of work from later decades discussed in the majority of the book. Yet the chapter as a whole omits what was a tremendously rich period in the production of sculpture for spaces within the public built environment. While the immediate postwar period is admittedly beyond the scope of her book, Bogart’s brief discussion of it overlooks or skirts around the crucial role played by corporate or private patronage, a vital if short-lived period that sought to again reengage art with architecture within the context of modernism. One wonders if it might have proved more effective to begin the book in the later 1960s, when her analysis really gains momentum, to avoid such issues.

While in no way detracting from the overall success of Sculpture in Gotham, there is also a somewhat distracting issue of terminology. In the introduction, Bogart offers a provocative definition of public art. Whether temporary or permanent, loved or reviled as “an aesthetic object,” public art, she claims, is a “vestige of political action by specific individuals or groups” (13). This definition serves as something of a conceptual bedrock throughout Sculpture in Gotham, underscoring that a thorough understanding of public art has real-life implications and that scholars should feel empowered to serve as advocates for its continued preservation and relevance. The problem, however, is that throughout the book “public art” becomes interchangeable with “public sculpture,” without any substantive acknowledgment or unpacking of the differences between the two. While this perhaps may seem nothing more than a semantic quibble, it calls attention to an oversight that unfortunately runs throughout Sculpture in Gotham, namely the crucial role played by materials, materiality, and the formal and sociohistorical qualities of both the artworks and the specific sites they occupy or occupied. Again, Bogart plainly states that the aesthetics or specifics of any one project are not the primary focus in Sculpture in Gotham, but considering that “sculpture” is featured in the title of the book, it should be treated as more than just a synonym or placeholder for any kind of public “art object” (15).

Where Bogart truly excels in Sculpture in Gotham, however, is in reminding or perhaps informing the reader anew of the particularities that are unavoidably embedded in the practice and production of public art. To return to Saltz’s tweet, what his critique exposes is one of quality. Public art, as Bogart shows, has always had to be about more than aesthetics or form; however, those invested in its production and presentation—from artists to municipal arts administrators—inherently have to grapple with questions of function. This fact has no doubt proven problematic in an art world that still prioritizes individual genius and expressive autonomy above all else. Public art has always operated in a very different context from the high art on display in New York in Chelsea galleries or institutions such as the (new) Museum of Modern Art. Not to diminish any other types of art or its importance, but public art, even bad public art, by default of its placement in public places, has a much greater impact, at least in terms of the sheer number of people who encounter it. As Bogart acknowledges in the opening paragraph of Sculpture in Gotham, public art in contemporary cities is a “hot commodity,” intertwined with aesthetics, community, and heritage, to be sure, but also quite conspicuously with décor, entertainment, tourism, civic policy, and economic interests (7). These complex, often impure associations, however, do not make public art bad or lesser than but instead are a form of art that demands different considerations, parameters, and standards. With Sculpture in Gotham, Bogart reminds us that the art in our streets, on our buildings, or activating our built environments is the result of a multifaceted negotiation between multiple stakeholders—a vital, albeit imperfect, civic contract that affirms the continued importance of art in everyday life.

About the Author(s): Marin R. Sullivan is an art historian and curator