I am writing this at the height of the COVID-19 pandemic. I have not left my suburban neighborhood for weeks, yet the effects of globalization have never been so glaring. The international circulation of people and goods—once rendered almost invisible by its ubiquity—is now newly conspicuous, offering us daily reminders of the permeability of national borders, the interconnectedness of financial markets, the geographic extension of supply chains, and the vulnerability that comes with uneven development. Unraveling the history of these contemporary realities seems especially timely.

The field of American art has enthusiastically embraced the broader discipline’s global turn, but transnational approaches have tended to shy away from questions of empire. In some ways, this is not surprising. As a field of study, American art may have become increasingly expansive—in its broadest terms encompassing settler and Indigenous practices from North to South America as well as extending beyond the continent to various diasporas. Yet the art and artists of the continental United States remain prominently at the center of the field. Imperialism, after all, is a fraught term in the United States. Reared as we are on democratic ideals, it rarely enters the national vocabulary of Americans on the so-called mainland. We tend to treat imperialism as the faintest blip in national history—after all, we convince ourselves, US colonies abroad were few and short-lived compared to our nation’s European counterparts.

The country’s present-day position as a global superpower is linked to a long history of exploitative international practices, both formal and informal. US empire-building efforts were at their height at the turn of the twentieth century, ushered in by the annexation of Hawai‘i and the Spanish-American War of 1898, which gave the United States possession of Cuba, Puerto Rico, Guam, and the Philippines. In the early decades of the twentieth century, American forces also conducted military interventions in Panama, Honduras, Nicaragua, Mexico, Haiti, and the Dominican Republic in what are now often known as the Banana Wars. But the groundwork for colonization was established in the name of commerce and trade long before such military campaigns. The American exploitation of labor and resources around the world has historically been overshadowed by the self-imaging of the nation as a republic, leaving mainland Americans in a state of “chronic confusion about [the country’s] own borders,” in the words of historian Daniel Immerwahr.1 As a result, scholars must contend with an ongoing pattern of denial that has relegated US imperialism to the periphery of the broader study of American culture.2

This is especially true of scholarship on art of the United States, where scholars have often bypassed the politics of colonial relations to focus on the global dimensions of religion, cultural exchange, or cosmopolitan consumerism. Accounts of imperialism have largely been limited to representations of the conquest and control of continental territory and Indigenous peoples, despite reminders from historians that the tactics of ethnic violence and geographic displacement that developed during westward expansion were also applied internationally. Overseas empire building remains a blind spot in our field due to both a specific historiographic bias—with origins dating back to an era of Cold War exceptionalism, when scholars focused on defining the “Americanness” of US art both past and present—and the longtime privileging of continental over territorial concerns in American culture more broadly.

Recently, a number of art historians have worked to undo the culture of national amnesia around imperialism, and the goal of this Bully Pulpit is to highlight some of their contributions.3 I asked our assembled group of scholars to reflect on their approaches and the diverse perspectives they bring to American art and empire. How should imperialism factor into a history of American art, and what methods should we use to study it? Can American imperialism be studied from the center of the artistic canon, or must a revisionist narrative rely on recovering buried or overlooked visual and material artifacts? Should we model our approach after those used in art-historical fields such as British or French art, where empire has long been central? Or does the specific case of the United States demand alternative methods or a shift in focus to unexpected genres or types of artistic practice? How might scholars of US art dialogue with historians of postcolonial, Indigenous, and diasporic art over shared artifacts of colonization? How best can we reveal the imprint of American imperialism in our visual culture to a skeptical public?

My own energies recently have been devoted to unraveling the global entanglements of the nineteenth-century canon. With the expansion of US power and influence abroad, scenery, products, and people from afar increasingly made their way onto the canvases of American artists. To represent the globe at such a time was never a neutral endeavor. This is not to say that painters were necessarily the co-conspirators of expansionists. In fact, many American paintings tell far more complex stories—stories that will remain untold unless we deal with the dark side of global art history. 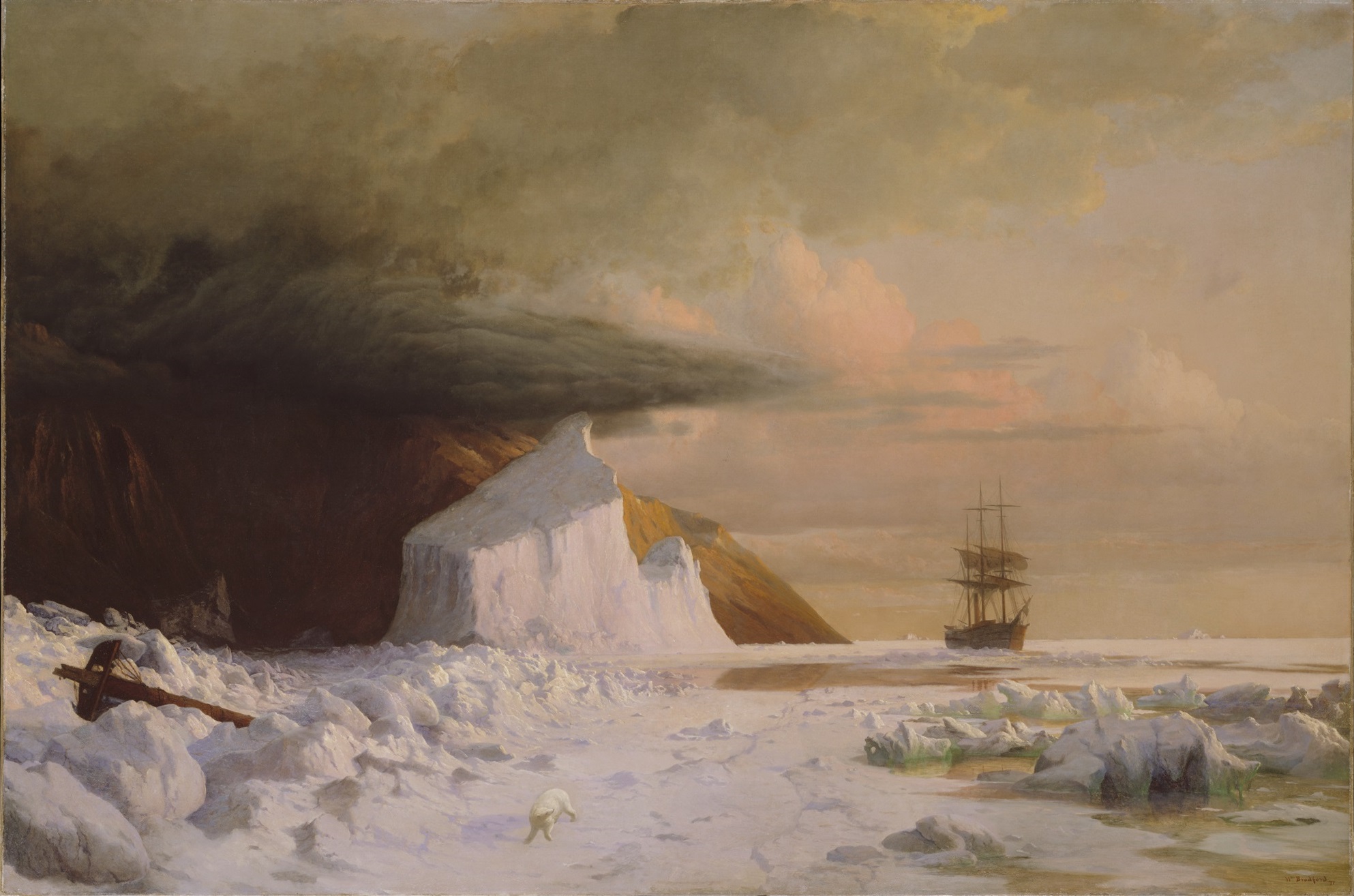 There are two nineteenth-century genres that have long been considered particularly “American”: landscape and trompe l’oeil still life. Scholars of both have attended to their politics, though rarely in the global terms of empire. When Hudson River School landscapists such as Frederic Edwin Church (1826–1900) and William Bradford (1823–1892) traveled beyond national borders to the polar reaches of the hemisphere, they were engaging with the imperialist quest for maritime dominance. In majestic scenes of the frozen north (fig. 1), Bradford’s icebreaking ships reference the pursuit of the fabled Northwest Passage, the shortest route between American cities and trade destinations in East and South Asia. Arctic landscapes, though filled with glaciers and icebergs, allowed Americans to imagine a clear route to the Pacific and the tropics and, with it, economic dominance over European colonial powers who were physically closer to Asia’s most desirable trade ports. Untangling such political threads requires a wide interdisciplinary inquiry of global scope—encompassing not just the history of American commerce and exploration but also histories of geography, supply chain infrastructure, and oceanographic science.

My approach of revisionism is also, importantly, not just about uncovering overlooked historical contexts. It is equally imperative that we connect such contexts to the political stakes of our present. Today, the Northwest Passage is no longer a mythical quest. With climate change, the polar seas are melting, and Americans are poised to take advantage of a new shipping artery that could be as significant as the Panama Canal, a major US imperialist endeavor of the past. Ironically, though, the same warming temperatures will lead to losses of land and livelihood in much of the developing world—countries that produce the goods and raw materials upon which American consumers rely. 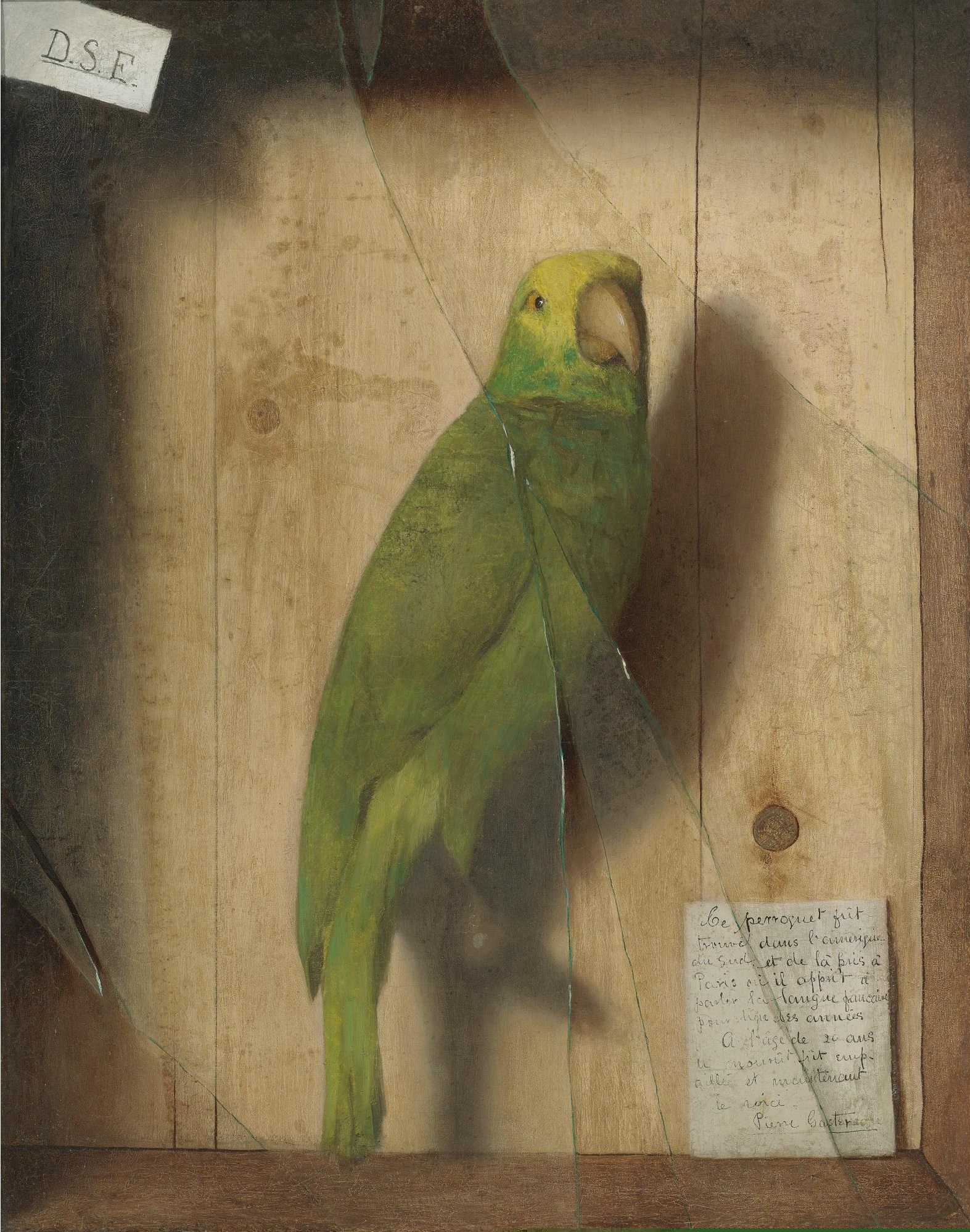 Commodities have long been at the center of American imperialism, and following them from cargo to canvas is revealing. In the nineteenth century, the artists most engaged with the political nuances of imported goods were the painters of trompe l’oeil. Americanists have, however, long associated this hyper-illusionistic style of still life, designed to “fool the eye,” with national memory and domestic industry.4 Limiting the study of trompe l’oeil to a national context does not do justice to the ways that its makers lavished attention on the most mobile of things, from torn packages to stamped letters. Trompe l’oeil painters were especially fascinated by the imprint of circulation on the goods they so minutely rendered. Instead of reading these physical marks simply as signs of use and sentimentality, we might foreground their geographies to tackle their political implications.

When De Scott Evans (1847–1898) painted a stuffed parrot behind glass in 1890, for instance, he was doing much more than representing a then-popular parlor pet (fig. 2). Unlike other exotic cargo that made its way into American homes, the parrot—by virtue of its talents in mimicry—could be imprinted with the history of its own circulation. The political stakes of global migrations were at the heart of Evans’s painting, which features a French inscription that reads, “This parrot was found in South America and from there taken to Paris, where he learned to speak the French language for many years”—a narrative that highlights the imposition of language in colonization. John Haberle’s (1856–1933) Chinese Firecrackers, meanwhile, engages with the racial meaning of global goods in the United States (fig. 3). Haberle’s half-spent strand of red firecrackers—popularly known as “mandarins”—is shown with a label revealing a manufacturer’s address in Canton, China. Hung so as to obscure the name on a laundry service sign, the product stands in for actual “mandarins,” who faced mob violence and public threats following the passing of the Chinese Exclusion Act in 1882. By engaging the nuances of circulation, trompe l’oeil painters offered American viewers intimate access to not just the material condition of imported things but also the systems of colonialism that gave them meaning. To shed new light on familiar artworks requires that Americanists be attentive to technique as well as subject matter—often secondary concerns in revisionist art history. The parallels between trompe l’oeil and rote mimicry also made the genre a fitting analogue of certain practices of colonial relations. 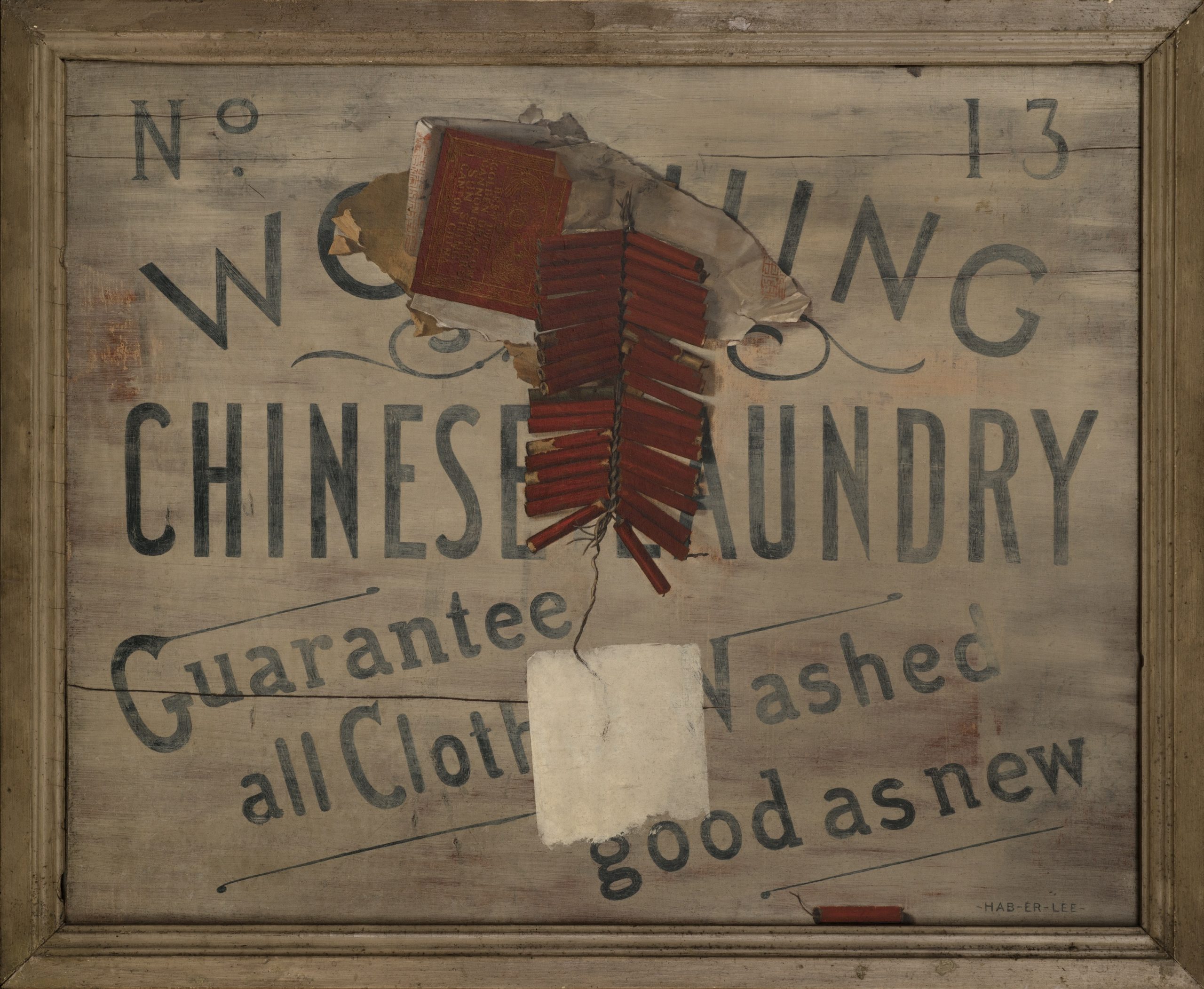 The most global of historic American paintings were not always political on the surface, but to gloss over their intersections with colonizing endeavors is to risk rehearsing past narratives of exceptionalism. If the current pandemic has brought new awareness of American power dynamics on the world stage, then we ought to use this opportune moment to better account for the nation’s imperialist past and present.

PDF: Cao, What is the Place of Empire?

About the Author(s): Maggie M. Cao is Assistant Professor of Art & Art History, University of North Carolina at Chapel Hill