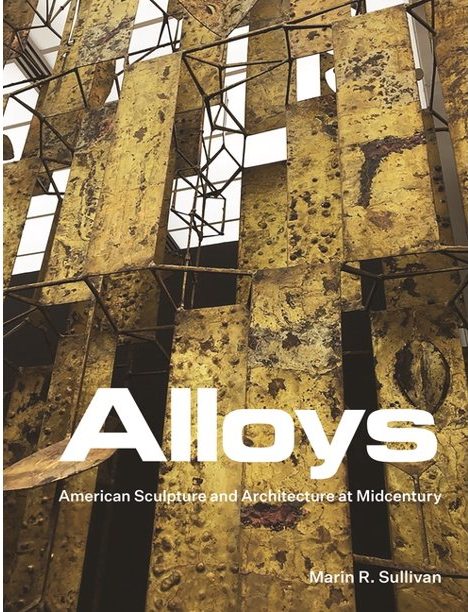 The two decades following World War II saw a tremendous building boom in the United States and an attendant desire by many modern architects and their clients to incorporate works of art into their buildings. In Alloys: American Sculpture and Architecture at Midcentury, Marin Sullivan identifies, within this broader phenomenon, a significant subset of art that was truly integrated with—and integral to—its architectural context. She finds in these projects “a model of modern sculpture responsive to the imagery and effects of the space age that embraced new industrial materials and processes, and even more significantly, demonstrated the ability of art, of sculpture, to inhabit and coalesce with the lived space of architecture” (14). Many of the midcentury artists most willing to work with architects to create site-enhancing sculpture have been marginalized in histories of modernism and postwar avant-garde art largely due to a dominant critical viewpoint that privileges artistic autonomy over work that can be construed as decorative, derivative, and/or instrumentalized. Sullivan seeks to illuminate the significance of these artists and projects by defining and evaluating the work as sculpture. Her approach is in direct contrast to other art and architectural historians she cites, like Amanda Douberley and Alice T. Friedland, who have focused on the function of these works, especially in relation to corporate investment and nascent concepts of brand identity.

Sullivan contends that the four most active practitioners of this kind of sculpture were Harry Bertoia, Alexander Calder, Richard Lippold, and Isamu Noguchi. Rather than present them as four distinct case studies, Sullivan organized the three chapters of the book according to the way that their sculptures connect with buildings, that is, how they engage with the “language of architecture” (46). The first chapter, “The Space Above,” is about sculpture “as ceiling” or that hangs from a ceiling (56). The second chapter, “Dividing Space,” focuses on sculpture that takes the form of a wall or screen. The third chapter, “The Space Between,” examines sculpture that stretches from floor to ceiling. An epilogue, “Preserving Space(s),” recounts the fates of several of these projects in the decades after their making. Several examples of each artist’s work appear in each chapter, illuminating the rich connections Sullivan makes between differing techniques, forms, and critical receptions. The book is brimming with high-quality reproductions of period photographs of these dynamic sculptures in situ, giving readers rich visual material to reference alongside the text.

Sullivan frames her project using the metaphor of “alloying,” a term taken from metallurgy that describes the mixing of two different metals to produce a new and improved material that maintains the characteristics of its constituent elements (brass, for example, is an alloy of copper and zinc). She argues that, in the best cases, sculpture alloyed with architecture produces a synergetic relationship in which both building and sculpture are mutually transformed. Synergy as a concept was popularized at midcentury by the polymath Buckminster Fuller, and while it has subsequently come to evoke hollow corporate-speak, Sullivan retains Fuller’s almost utopian associations of the term with science and technology. The alloy metaphor is especially apt in relation to direct metal sculpture, which came to dominate American sculpture at midcentury. Oxy-acetylene welding torches became readily available to artists after the war, as did a plethora of new, industrially manufactured forms of metal, like wires, rods, sheets, and I-beams, opening up a world of possibilities for artists to shape and assemble metal sculptures without having to rely on traditional methods of casting in a foundry. Of the four featured artists, Bertoia and Lippold emerge as the star players in Sullivan’s account due to their exploitation of the properties of different metals and metal alloys in their sculpture. Indeed, the book cover features a close-up shot of the richly textured brazed and welded surfaces of Bertoia’s massive 1954 metal screen for the Manufacturers Trust Company Building in Manhattan. Bertoia’s and Lippold’s successes and failures set the terms for Sullivan’s historical reading of American sculpture and architecture at midcentury. This is made immediately apparent in the prologue, which focuses on Lippold’s 1959 bronze and stainless-steel sculptures suspended above the bar and mezzanine of the Four Seasons restaurant in Mies van der Rohe’s Seagram Building in Manhattan. Mark Rothko famously withdrew his own commissioned paintings, now known as the Seagram Murals (1958–59), for this same restaurant, in an oft-told tale of modernist antagonism toward the presumed subservience of decoration. The difference between Rothko and Lippold comes down to a question of focused rather than distracted consumption, of art seen as apart from, versus integral to, everyday life. In reframing this narrative in terms of Lippold’s successful contribution of suspended bronze rods that harmonized with the interior decor, Sullivan positions Lippold’s sculptures as “serious fine art, not sequestered or depreciated, but fully enmeshed in the space of everyday life—martinis and all” (11).

In the first chapter, Sullivan delineates the aesthetic criteria for judging the success of sculptural additions to vast new architectural spaces, including the activation of space and a responsiveness to the architectural tone or feeling. She also emphasizes the importance of dialogue between architect and artist during the early stages of design so that the sculpture does not appear as an afterthought or superficial addition to an already-completed building. Noguchi’s 1946 sculpted ceiling design for the lobby of the American Stove Company Building in St. Louis, Missouri, is a centerpiece in this chapter, though in many ways, it is an outlier in the book. Made of common building materials and executed by construction workers following a scale model and plot plan by the artist, the work is a part of the architecture and arguably does not meet the stated criteria of retaining its “legibility or status as a sculptural object” (43). What it does provide, through Sullivan’s characteristically careful research and contextualization within Noguchi’s practice, is an excellent example of an artist and an architect collaborating on a feature that transformed the building and set the tone for other design decisions made by the architect. The examples that follow in this chapter, many gathered under the rubric of “chandeliers for the Space Age,” include Calder’s early monumental mobile, called .125 or Flight (1957), for the International Arrivals Building at what was then officially known as the New York International Airport (now John F. Kennedy International Airport) in Queens, and Lippold’s Orpheus and Apollo (1962) for Philharmonic Hall at Lincoln Center for the Performing Arts in New York City. Sullivan concludes the chapter with an examination of a sculpture that arguably failed aesthetically, Bertoia’s suspended screen for the Dallas Public Library (1955), which was immediately engulfed in public controversy and, more importantly to Sullivan, “never became structurally or spatially entrenched within its architectural environment” (96).

Chapter 2 focuses on the horizontal expanse of the wall, the locus of the most contentious theoretical debates about the relationship between art and architecture at midcentury. Sullivan acknowledges and moves quickly past muralism (painting at an architectural scale) to the opportunities presented by sculpture in this period for dynamic integration with architecture that went beyond surface decoration. Sculpture, she notes, pointed the way forward because of the medium’s “physical and categorical malleability” (122). In a section titled “Sculpted Walls,” Sullivan puts Bertoia’s spill-cast bronze wall for Dulles airport (1962) in conversation with Constantino Nivola’s sand-cast relief wall for the Olivetti showroom in New York City (1954). Both sculptors deployed novel techniques to create highly textured surfaces that brought energy, tactility, and a soft organicism to otherwise sleek architectural spaces. From here, she examines the space-dividing sculptural screens of Bertoia at the General Motors Technical Center in Warren, Michigan, and the Manufacturers Trust Company Building in New York City, both of which draw on the architectural tradition of ornamental partitions. In describing Bertoia’s screens and Nogochi’s 666 Fifth Avenue Ceiling and Waterfall (1956–57), Sullivan argues that such projects “demonstrate the disciplinary slippage and borrowing that was quickly occurring between architecture and sculpture during the immediate postwar period. . . . These sculptures were never just screens or walls, nor were they just sculpture. Rather, they stand as space dividers, material manifestations of midcentury cross-disciplinary synergy” (151).

In chapter 3, Sullivan turns her attention to the spatial dimensions of sculpture at midcentury, highlighting projects like Bertoia’s reredos (1955) for the Kresge Chapel at the Massachusetts Institute of Technology and Lippold’s Radiant I (1958), commissioned for the lobby of the Inland Steel Building in Chicago. She argues that artists like Bertoia and Lippold embraced metal as their medium not out of a fetishization of its materiality and industrial connotations but because it allowed them to explore different facets and constructions of space. She thus builds toward a bigger claim that projects by Bertoia, Lippold, Calder, and Noguchi “reveal nothing short of a crucial missing link within the established history of American art,” as their work pushed the medium of sculpture “into the phenomenological realms of the environmental and experiential, which would become hallmarks within minimalist, postminimalist, and even postmodernist installation practices of the later twentieth century” (199). It is a bold and convincingly argued claim.

Sullivan’s arguments are grounded in close visual and contextual analysis of the different commissions. Her prose is engaging and peppered with the voices of key interlocutors of the period, such as architectural critic Ada Louise Huxtable and architect Peter Blake. The book is purposefully focused in scope and argumentation, and as such it invites scholarly responses that build on its contributions. This reviewer wonders, for example, if Sullivan’s commitment to seeing these works as sculpture, rather than in the broader realm of design, might have foreclosed a fuller understanding of the impact and influence of this remarkable body of work. Complex questions of disciplinarity and categorization abound, leaving the reader, in enticing and positive ways, with much to ponder.

About the Author(s): Sydney Skelton Simon is the Bradley Associate Curator of Academic Affairs at Yale University Art Gallery