As the second impeachment trial of former president Donald J. Trump barreled toward its predictable conclusion, one of the most powerful arguments in favor of conviction was delivered by a congresswoman who never cast a vote to impeach. Congresswoman Stacey Plaskett of the US Virgin Islands made history as the first nonvoting delegate from a US territory to serve as a house impeachment manager, delivering a searing indictment of the former president’s inflammatory actions in the months leading up to the January 6 assault on the Capitol. She was also, in the wake of Kamala Harris’s recent departure from the Senate to become vice president, addressing the Senate as the sole Black woman in the chamber. Plaskett’s paradox—tasked with the monumental undertaking of proving the former president’s guilt and yet barred from participating fully within the body in which she serves—highlighted the ambivalent, neocolonial relationship of the United States to its territories in the Caribbean and the Pacific. It is a relationship dictated by the imperialist ideologies embedded within the architectural and aesthetic foundations of the US Capitol building itself.

Perhaps no group of objects within the Capitol complex better encapsulates this imperial legacy than the monumental history paintings that line the walls of the Rotunda. During the 1830s and 1840s, Congress tapped four American artists—John Vanderlyn, Robert Walter Weir, John Gadsby Chapman, and William Henry Powell—to produce academic history paintings for its interior. Each artist took up a distinctly regional theme with the ultimate goal of creating a visual narrative that would unite a rapidly expanding nation comprised of disparate peoples and inculcate settler-colonist ideals. Weir’s The Embarkation of the Pilgrims (1843), Chapman’s Baptism of Pocahontas (1839), and Powell’s Discovery of the Mississippi by De Soto (1853) centered on the North, South, and West, respectively. By contrast, Vanderlyn set his sights beyond the shores of the contiguous United States. In selecting the theme of The Landing of Columbus, Vanderlyn looked to a distant past and an aspirational future, crafting what would become the quintessential image of US imperial ambition (fig. 1). 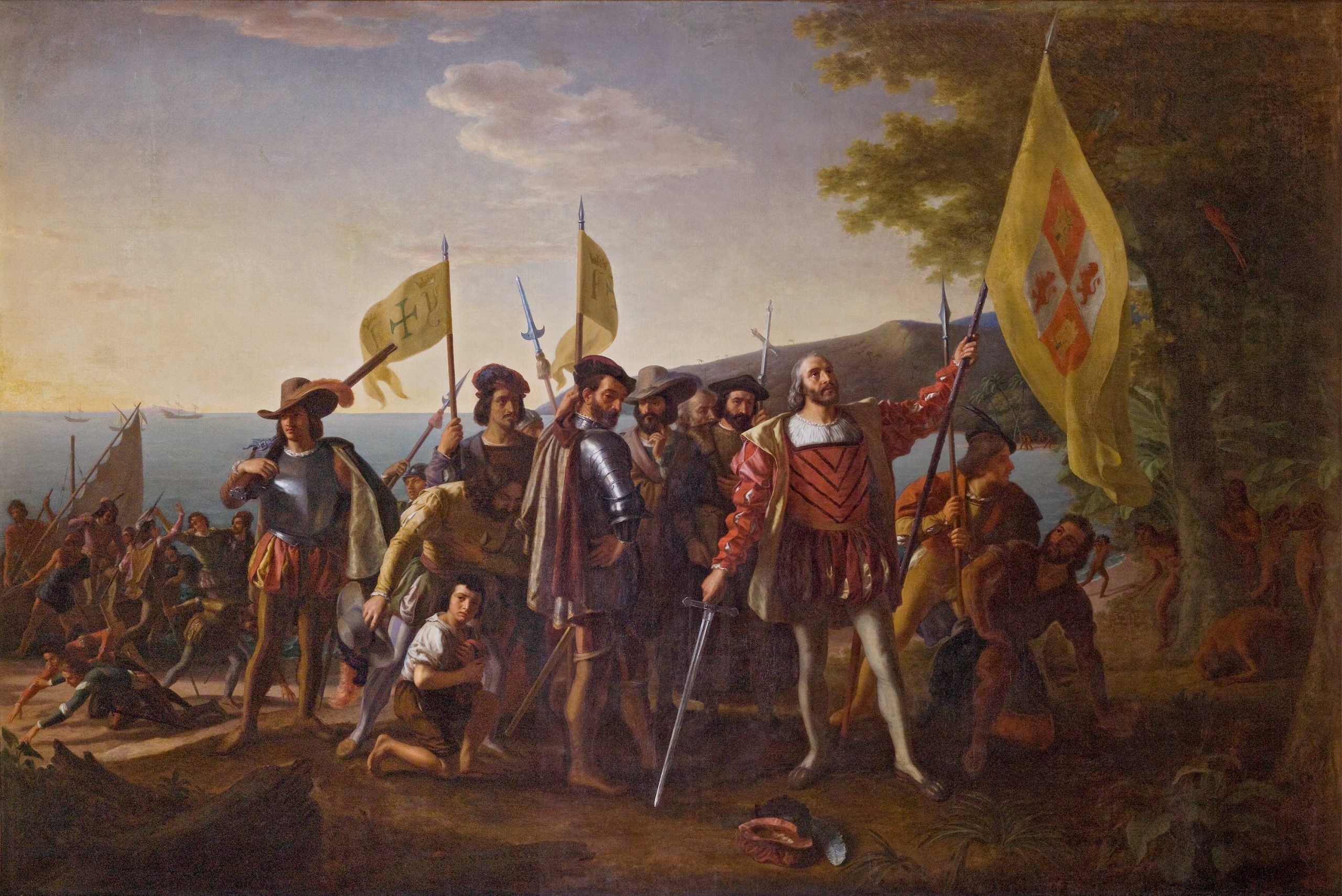 In 1492, Christopher Columbus and his crew made landfall on a small island in the Bahamas, called Guanahani by its Indigenous inhabitants, the Taíno Lucayans. Its exact location is unknown—over the centuries, figures including Bartolomeo de las Casas, Washington Irving, and Alexander von Humboldt have all proffered their own theories—but its geographic indeterminacy only serves to enhance its mythos. Art historians have suggested that in seeking to represent the fabled landing, Vanderlyn traveled to Cuba to study the flora and fauna of the West Indies firsthand.

Vanderlyn’s supposed fidelity to nature, however, hardly bears out in the artist’s monumental work. In Vanderlyn’s composition, Columbus and his crew disembark on the shores of a wooded landscape. While the scene lacks any particular geographic specificity, the tropical setting is suggested by a slice of exotic foliage and a smattering of palms dotting the water’s edge. Columbus and his crew dominate the action, visually crowding out the island’s Indigenous inhabitants, who in their nudity serve primarily as markers of difference. Without a fixed geographical locale or a culturally distinct people, Vanderlyn’s vision of conquest might represent any locus of US imperial desire, from Puerto Rico and the Virgin Islands in the Caribbean to Guam, American Samoa, and the Northern Mariana Islands in the Pacific.

Today, 3.5 million American citizens and nationals in these US territories, the vast majority of them people of color, remain deprived of equal voting rights. It was for this reason that Plaskett’s passionate defense of free and fair elections resounded so powerfully. If Vanderlyn’s The Landing of Columbus provided a perversely appropriate backdrop for antidemocratic violence as the events of January 6 unfolded, it might also serve as a reminder that for millions of Americans, the injustices of empire continue to be felt. From textbooks to tea towels, Vanderlyn’s history painting has been endlessly reproduced for nearly two hundred years, serving to carry its imperialist message far beyond the rarified halls of the Capitol building. Among Vanderlyn’s many imitators is American artist Titus Kaphar, who meticulously recreated The Landing of Columbus, but with a significant alteration. In his iteration, Kaphar drapes the bodies of Columbus and his crew with swaths of raw canvas fabric, its sinous folds obscuring their faces, torsos, and limbs from view. With Columbus exorcized from the scene, Kaphar inverts Vanderlyn’s hierarchy, shifting the viewer’s gaze onto the Indigenous islanders whose presence, like Plaskett’s, demands to be acknowledged.

December 6, 2021: An earlier version of this article provided the incorrect middle name for John Gadsby Chapman.