On January 13, 2021, one week after the attempted insurrection and attack on the United States Capitol, five Black National Guardsmen took a short reprieve from their duties to snap photographs with a bronze statue of civil rights hero Rosa Parks in National Statuary Hall (fig. 1). Despite the cause of their deployment, this image captures a moment of joy. 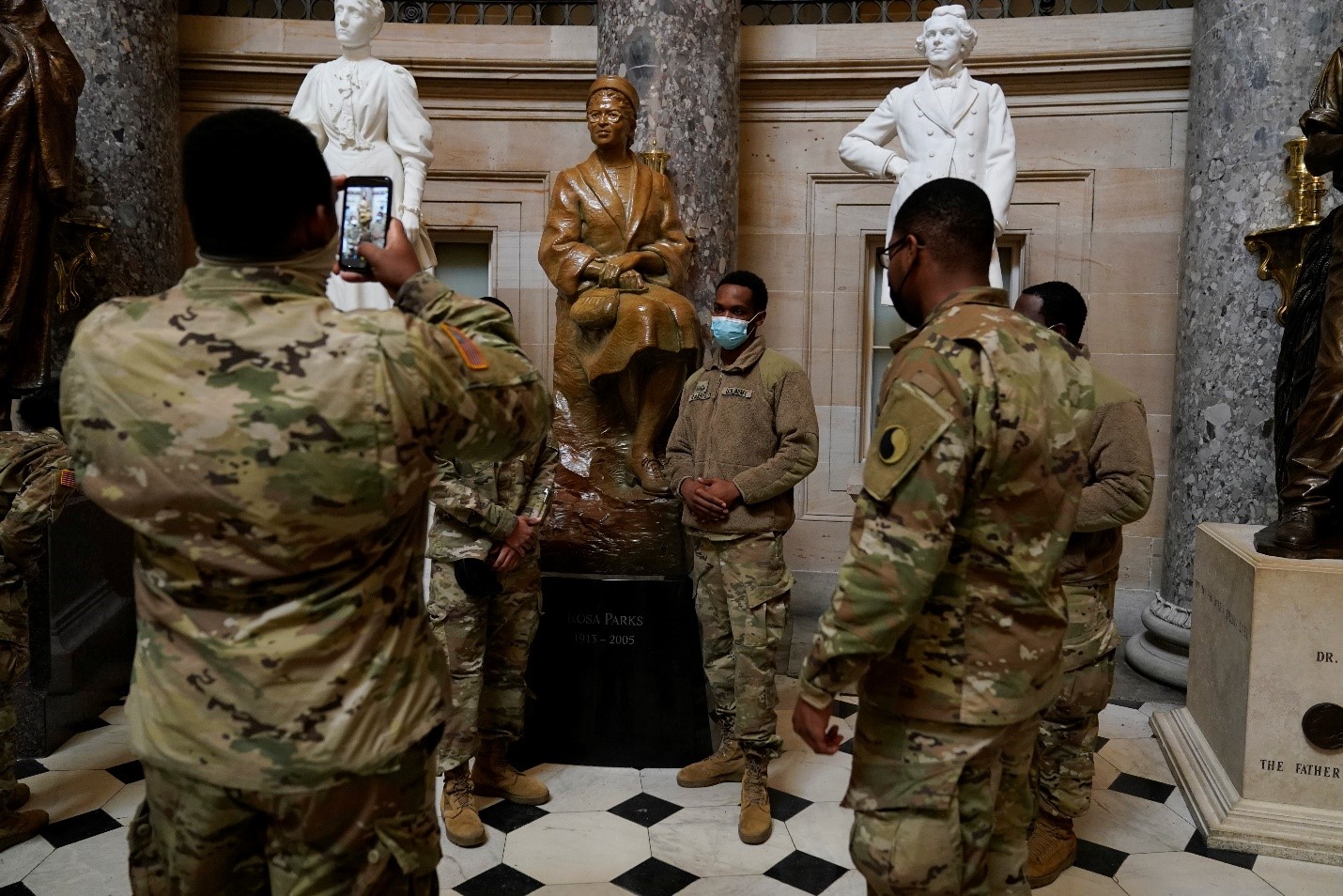 Fig. 1. “National Guard member poses for a picture with a statue of the civil rights activist Rosa Parks as Democrats debate one article of impeachment against US President Donald Trump at the US Capitol, in Washington, US,” January 13, 2021. REUTERS/Joshua Roberts

Imagine the feelings of these men. They are able—albeit in an abstract way—to protect the visage of someone who worked tirelessly to guarantee many of the protections they enjoy today. Even in death, Mrs. Parks continues to act as a model of resilience and a beacon of hope against the societal ills that plague this nation.1 The significance of her presence in Statuary Hall cannot go unnoticed.

Seated atop a black granite base, the statue of Mrs. Parks is distinguished from her sculpted peers standing around her. She is the first and only Black woman to be honored with a full-length likeness in the Capitol, and her statue remains the singular sculpture of a Black person in the hall.2 The brilliance of her legacy is highlighted by the bronze in which she is cast, set against the austerity of the white marble statues positioned to either side of her: educator and suffragist Frances E. Willard to her right, and physician and scientist John Gorrie to her left. Like them—and the more than one hundred other historical figures represented in the Capitol—Mrs. Parks has been accepted into this “temple of democracy.” She assumes a position that she has no choice but to accept, invited to sit among a select few in this American pantheon—a collection of eminent figures whose achievements and service to this nation is undeniable and demands everlasting memorialization.3

Statuary Hall, a secular shrine, pays no deference to gods. Yet, per Section 2131 of Title 2 of the US Code, it commands the veneration of “deceased persons who have been citizens . . . illustrious for their historic renown or for distinguished civic or military services . . . deem[ed] to be worthy of this national commemoration.”4 Visitors might presume a neutrality among the figures, because their placement in the Capitol affords multiple, concurrent, separate, and equal modes of commemoration and reverence. In marble and bronze, this pantheon elevates and bestows immortality upon those deemed to have achieved mythic stature in our collective history. Sculpture’s lack of nuance and narrative structure compels us to understand these figures and their presence within Statuary Hall in no other terms than salutatory ones.

And therein lies the problem.

As I stare at the photograph of those guardsmen with Mrs. Parks’s statue, I share in their joy, yet I cannot help but want more from her sculpture. I want her to crack a smile, place a hand on the young men’s shoulders, or maybe grace them with a history lesson. But unfortunately, that is not possible, nor can it ever be, because Mrs. Parks—like these guardsmen—is on duty.

As the guardsmen shower Mrs. Parks’s representation with love and admiration, her gaze is met by that of another bronze sculpture from across the semicircular hall: that of the former president of the Confederacy, Jefferson Davis. Not unlike Mrs. Parks, Davis commands an equal, albeit ideologically and politically disparate, type of reverence, as his statue embodies the ideation of the Lost Cause. For the last ninety years, the contested placement of Davis in the hall has been a testament to the Confederacy’s pervading vitality within our culture. In contrast, Mrs. Parks’s statue personifies the ongoing crusade for civil rights and the persistent need for the establishment of a more equitable Union.

The tensions marked by the placement of these sculptures, and the antagonistic, reciprocal acts of looking they are forced to endure, leaves me feeling aggrieved for Mrs. Parks and her statue’s location within this space. The difference between Rosa Parks and Jefferson Davis is not a matter of mere politics, but a matter of how we define service to this nation. One of these people sought to destroy the Union and the other strove to save it from itself. So I question why Mrs. Parks was included in Statuary Hall—but not because she is undeserving of the honor, by any measure. Instead, I question whether she is there to be celebrated or to act as a tool of contestation.

When congressional leaders and President Barack Obama unveiled the statue of Rosa Parks in 2013, then-Speaker of the House John Boehner commented on the symbolism of its placement across from the statue of Jefferson Davis. Boehner, expressing sentiments similar to those voiced by many after the January 6 attack on the Capitol, spoke of Mrs. Parks’s statue as a clarion call for us to live up to what Abraham Lincoln called “the better angels of our nature.”5 The presence of Mrs. Parks in the hall seems to contest Davis’s inclusion, and the symbolism found in their statues’ exchanged gazes is palpable and powerful. Yet, if a pantheon legitimizes and equalizes all within its domain, why would such contestation be necessary?

If the presence of Mrs. Parks’s statue functions partly as a check and balance on sculptures of Davis and other Confederate leaders, then these representations—along with myriad other statues of white supremacists, segregationists, and colonizers in the Capitol—perform an inverse function. In the “temple of democracy,” Confederate statues outnumber statues of Black figures by a ratio of three to one. Their ubiquity resists the potential influence of Rosa Parks’s inclusion in Statuary Hall and provides an alternative narrative about whom the nation should celebrate and which achievements are deemed worthy of celebration.6 Therefore, the presumed and professed neutrality of the sculptures in National Statuary Hall, and to a greater extent the Capitol as a whole, is but mere fantasy.

In this regard, Statuary Hall is not a pantheon, but rather an exceptionally politically charged environment that attempts to maintain its neutrality, or at least an apolitical veneer, while at the same time using sculpture to engage in ideological warfare. Mrs. Parks is the latest conscription in this ongoing battle. Once again, we task a Black woman—even in her death and commemoration—to bear an insurmountable burden and perform labor we are unwilling to take on ourselves.

So, to one of the questions posed by this Colloquium, regarding whether or not this space can be made more inclusive, I answer—no. We must acknowledge frankly that sculptures within this gallery and throughout the Capitol function as political tools as much as they are commemorative ones. I know there is a resounding fear among many Americans that removing or altering these objects will erase, hide, or obfuscate the past. But the mere existence of a material artifact or art object is not evidence of its historical value, particularly when the fine arts, especially sculpture, are often used to conceal, perpetuate, and defend white supremacy. Many of these statues, in effect, lie about who they are and what purpose they serve. And we continue to let them lie to us.

For this reason, I recoil at the oft-cited solution that the right amalgam of signage, framing, group-led tours, or counter-monuments will allow us to reclaim Statuary Hall and spaces like it as inclusive. White supremacy cannot be negotiated with, whether in the form of a Confederate battle flag or statues to men who carried that flag into battle. We therefore cannot assume that we will subdue the hateful ideologies of white supremacy by focusing our attention on inclusion. A place designed to hail the excellence of white men and their history can never be counterbalanced by including a few statues with black and brown patinas.

PDF: Parnell, Politics in the Pantheon

About the Author(s): Kelvin L. Parnell Jr. is a PhD Candidate in the Department of Art, University of Virginia